Nigella sativa (Black seed) is an annual flowering plant, belongs to the Ranunculaceae which has tremendous usage in medicine. In the treatment of digestive tract disorders, including gas, colic, diarrhea, dysentery, constipation, and hemorrhoids, the black seed is used. It is also used for asthma, allergies, cough, bronchitis, emphysema and other respiratory conditions. The seeds (50 g) were crushed, extracted with 70% methanol and filtered through filter paper. Antibacterial activity of the extract was assessed using the spread plate method against the Candida albicans. Different concentration of the extract i.e., 20, 40, 60, 80, 100% made and applied against mosquito larvae to determine the larvicidal activity of the extract. The results showed that the extract exhibited significant antimicrobial activity against C. albicans on the culture plate as compared to control. Different dilution showed larvicidal activity in a dose-dependent manner; however, 50% of larvicidal was noticed in all dilutions after 24 h. However, maximum activity was recorded in 60, 80, and 100% dilutions after 72 h. The results showed that the extract was extremely effective against the microbes even at the concentration of 50%. Similarly, the extract was very effective against microbes and could be used as an antimicrobial agent.

Nigera sativa (Black seed) is a herbaceous plant, grows annually; however, is also cultivated in different parts of the world, including Asia, Africa, and America. Black seeds are derived from the common fennel flower plant (Nigella sativa) of the Kennebug family (Ranuncula family) (Ahmad et al., 2021; Soltane et al., 2021). Black seeds have long been known and used for medicines ( Ali and Meitei, 2011). The black seeds have been  also  used and  recommended for the treatment of minor disorders such as skin conditions and allergies (Prashar et al., 2004). Prophet Muhammad (PBUH) illumined in the medicinal importance of the black seed. A large number of studies  have been  reported in a  detailed  review  on the  medicinal use of  super foods of  plant origin, based on the recommendations of  Prophet Muhammad, (PBUH)  by ). In recent years, research in the field of agriculture has focused on the economy of plants influenced by selective minor elements. Secondary metabolites from plant extract acts as reducing and stabilizing agents to produce new metallic nanoparticles through bio-reduction reaction (Jang et al., 2020). Comparatively, using a biological method for synthesizing nanoparticles is superior to a non-biological (chemical, physical) one, the former is inexpensive easy, and eco-friendly while the latter is highly toxic and hazardous for living organisms, ( Bharali et al., 2013 Ullah et al  2020).

The mosquitoes are the carrier of several diseases known as vector-borne diseases. The diseases are including yellow fever, malaria, dengue fever, and many others. Black seeds have reported being toxic against the larvae as well as adults of the T. castaneum even at extremely lower concentrations (Dagli et al., 2015). Moreover, plants source are a potent source for treating several diseases such as Cancer, Malaria, Human immunodeficiency virus (HIV), Hepatitis, and many other serious ailments (Dris et al., 2017). it has been mentioned in one study about the punctuality and application of plant extract in different fields including medicine, nutrition, and energy (Enan, 2005).

On the other side, the application for curing different bacterial and viral diseases in pharmacological industries is a remarkable advantage (Sabbah et al., 2020; Helaly et al., 2020).  Several studies have demonstrated the antibacterial activity of black seed oil against a variety of microorganisms (Ait Said et al., 2015). This effect is shown against Salmonella spp, E. coli, Shigellas pp. The biological method is cost-effective than others due to the abundant availability of biological entities easy procedure, hence highly explored for syntheses of nanoparticles (Zuzarte et al., 2012). The present study was designed to determine the larvicidal and antimicrobial activities of the extract of black seeds.

Methanolic extraction: The black seeds were rinsed in distilled water for removing surface dust particles. After washing the seeds were kept under sunlight for drying. The seeds were crushed with the help of liquid nitrogen and mortar. The powered seeds were transferred to the flask containing 70% methanol. After homogenization, the mixture was incubated on a magnetic stirrer at room temperature for two days. The mixture was filtered by using Whatman filter papers no.1. Furthermore, the filtrate was dried and was dissolved in deionized distilled water.

Antimicrobial activity of the extract: The fungicidal activity of the biogenic silver nanoparticles was assessed against the infectious fungi Candida albicans. This activity was determined using the colony-forming method. The C. albicans was cultured on PDA (potato dextrose agar) at 37°C, for 48 hours. Potato dextrose agar media were prepared and autoclaved. The autoclave media was transfer to the Petri plates and wait until solidification. The extract was applied on the plates followed by the transfer of C. albicans culture. The plates were incubated for 48 hours at 37°C.

Larvicidal Bioassay of the extract:The larvae of the mosquito were obtained from the Mosquito Research Laboratory, King Abdulaziz University Saudi Arabia. The larvae were reared in containers (25 × 35 × 6 cm) filled with up to the marked water supplemented with artificial food. The colony was maintained under the following conditions: 27°C ± 2°C, 70% ± 5% relative humidity. Different dilutions of an extract of black seed i.e., 20, 40, 60, 80, 100% (w/v) were used to assess the larvicidal activities.  The larvae were transferred to each well of the six-well culture plates. The larvae were given standard larval food and the temperature was kept 28 ± 2°C. After 24 h of exposure, percentage mortality was noted. The experiment was repeated three times.

Figure 2: Larvicidal activities of different dilutions of the extract of black seeds. 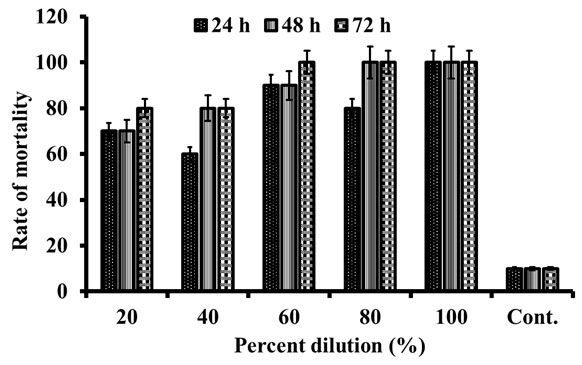 The results showed that the extract was extremely effective against mosquitos and also showed antimicrobial activities. The methanolic extract was dried and dissolved in different concentrations in water e.g., 20, 40, 60, 80, and 100%. All the dilutions were effective and killed the mosquito at their larval stages even within 24 h. similarly, the extract showed great antimicrobial activities against albicans.

Enan, E.E., (2005) Molecular and pharmacological analysis of an octopamine receptor from American cockroach and fruit fly in response to plant essential oils. Archives of insect biochemistry and physiology, 59, 161-171.

The authors are extremely thankful to all those who supported the study during experimentation and drafting.