Medicinal plants also known as herbal plants are oftenly used in traditional medicine to cure the human diseases. These plants have been used for thousands of years as medicine. The medicinal plants are naturally derived from an indeed resources of vegetable origin.  Herb is used for bark, flower, leaf, seed, stigma, stem and non-woody plant. Herbal plants have a significant potential source of therapeutics, and these plants have attained the commanding role in the health care system. In Saudi Arabia, flora has adjacent resemblance with African, Iranoturanian and Mediterranean countries. The prevalence rate of herbal plants in Saudi Arabia is in between 8-76%. Saudi Arabia also have the historical tradition of using herbal medicine in daily life. From the natural source, numerous medications were extracted from the plants. Black seeds, costus, fenugreek, garlic, ginger, henna, miswak and pomegranates are the list of prophetic medicines worked effectively for treating humans. The Saudi medicinal plants are positioned at various regions in kingdom. However, information of Saudi medicinal plants was stored in the Saudi Herbal Plants information system. This review was majorly focused on Leguminosae, Compositae, Labiatae and Euphorbiaceae herbal plant species which are used for the human treatment. This review concludes the available herbal medicines in Saudi Arabia and herbal medicines contain wide range of active pharmacological components have therapeutic effects. Lots of research shows that herbal medicines are used for the human treatment. Saudi Arabia has a great history in treating the diseases with herbal medicines.

Alghamdi S. A. A Mini Review on the Beneficial Source of Saudi Medicinal Plants for the Human Health Sector. Biosc.Biotech.Res.Comm. 2020;13(2).

Alghamdi S. A. A Mini Review on the Beneficial Source of Saudi Medicinal Plants for the Human Health Sector. Biosc.Biotech.Res.Comm. 2020;13(2). Available from: https://bit.ly/3cw0kjD

Copyright © Alghamdi This is an open access article distributed under the terms of the Creative Commons Attribution License (CC-BY) https://creativecommns.org/licenses/by/4.0/, which permits unrestricted use distribution and reproduction in any medium, provide the original author and source are credited.

Human therapies depend up on plants and its supplementation, known as the conventional complementary treatments in the health issues. Plant compounds play a perfect role in managing human diseases. Plants not only deliver food and fiber but also useful as medicine in treating social conditions. Before 5000 years, plants were used as medicines through various sources such as antineoplastic, antibiotics, cardioprotective and analgesics. Natural compound products were used for the infections. The term medicinal plant is defined as numerous kinds of plants applied in herbarium for the medicinal purposes and for its use. The medicinal plant can be used for therapeutic purpose and use for drugs. Randomly, 70% of the world population uses medicinal plants to cure human diseases, (Brima and health, 2017, Anand et al., 2019, Zielinska-Blizniewska et al., 2019).

The word medicine is derived from Latin word indicates “arsmedicina”, specifies as art of healing. Modern medicine is replaced with recent medical methodologies applied for treating the human diseases. Plants and herbs supply enormous chemicals towards their metabolic activities and to guard them from diseases (Mosihuzzaman, 2012).The stochastic estimation of 30,000 plant species was connected towards medicine globally and approximately, 15,000 plants were used for the preparation of drugs. Plant harbors the known and unknown chemical molecules which are applied in the pharmaceuticals (Manoharachary and Nagaraju, 2016). World Health Organization (WHO) defines herbal plants as used in treatment, diagnosis, or prevention of illness and to maintain the human health (Organization, 2019).

Herb is used for the reference for bark, flower, leaf, seed, stigma, stem and non-woody plant. Herbal plants have a significant potential source of therapeutics, and these plants have attained the commanding role in the health care system. Almost, two-third of the global population depends on herbal medicine for primary health care issues because of its cultural acceptability. Plant-derived drugs were discovered with traditional and therapeutics studies (Schulz et al., 2001, Oladeji, 2016). Herbal usage is widely involved in major global countries with complementary-alternative medicines (CAMs) (Ekor, 2014). Saudi Arabia also have the historical tradition of using herbal medicine in daily life. From the natural source, numerous medications were extracted from the plants. Black seeds, costus, fenugreek, garlic, ginger, henna, miswak and pomegranates are the list of prophetic medicines worked effectively for treating humans (Aati et al., 2019). The purported benefits of herbal medicines were applied for natural healing, inadequate side-effects, affordable, strength in the immune system, maintenance of hormones and metabolisms (Mohammadi et al., 2020).

However, Alghamdi et al (Alghamdi et al., 2018) studies confirm high usage of herbal plants in Saudi Arabia for human treatment. Arabian Peninsula covers Saudi Arabia, UAE, Bahrain, Yemen, Oman and Kuwait, which is located in the south-west Asian region. Saudia epitomizes the 2.2 Million of the longest part in the Arabian Peninsula (Schulz and Whitney, 1986). In Saudi Arabia, flora has adjacent resemblance with African, Iranoturanian and Mediterranean countries (Alfarhan, 1999). The prevalence rate of herbal plants in Saudi Arabia is in between 8-76% (Alrowais and Alyousefi, 2017). Saudi plants play a vital role in a portion of eco-system, sustaining and maintaining ecological balance and stability. The practice of medicines from the plants was processed earlier in 3000BC (Pharaohs), 400BC (Greeks), 37BC (Romans) and between Rhazes 865-1037 (Arab physicians) depended on plants for therapies (Al-Sodany et al., 2013, Akgül et al., 2016). Saudia consists of almost 1200 flowering plants throughout the kingdom and 50% of plants are used for medical purpose. J. procera, Rumex nervosus and Ziziphus spina-christi are the commonly used medicinal plants for herbs in the Saudi Arabia. The list of available medicinal plants used in southwest region of Saudi Arabia has been documented in the prior studies. Numerous plants were used for preparing the herbal medicines in Saudia and majorly plant leaves were used for the preparation (Ali et al., 2017). It is well-known that leaves form a key part of the plant certification which can be visible effortlessly (Akerreta et al., 2007). 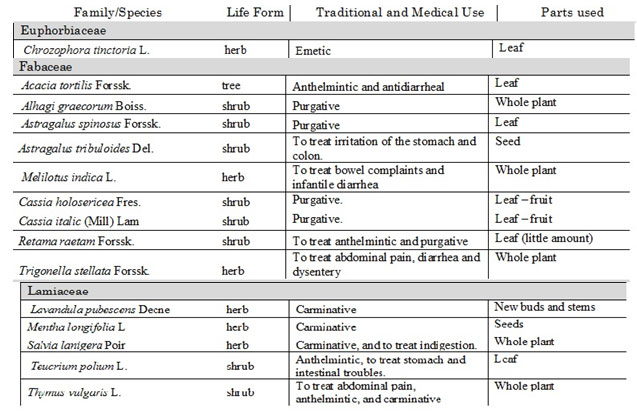 Alharbi et al ( 2017)  documented that  the Tabuk city which is located at North-Western part of Arabian Peninsula, consists of 81 plant species which comes under 30 families; 9 species of Fabaceae, 8 species of each Asteraceae cum Plantigrade and 6 species of Zygophyllaceae are designated as high plant species which is used for traditional and medicinal purpose (Table 1). These plant species will be used in the medicinal purpose in human diseases for skin diseases, ulcers, diabetes and gynecology. Al-Said et al (al-Said, 1993) studies has confirms as traditional medicines visible in Saudia will be beneficial for potent and drug safety. Drugs will be incorporated in the clinical health sector once the clinical trial requires to complete successfully. Taif city has documented with 261 species of 178 genera which comes under 55 families; Asteraceae, Asclepiadaceae, Brassicaceae, Boraginaceae, Chenopodiaceae, Fabaceae, Poaceae and Zygophyllaceae (Al-Sodany et al., 2013). The lowest medicinal plants with 28 families which involves 47 species have been recorded in Al-Rass domain at Qassim region (El-Ghazali et al., 2010).  The detailed information about these Saudi plant species has been documented in the prior studies (Rahman et al., 2004, Saganuwan, 2010, Khatibi et al., 1989). Alharbi (Alharbi, 2017) studies confirm plant species from the Taif region can be used to treat the human diseases for the digestive tract, parasites, skin, fungal and antifungal activities. In South-western Saudi Arabia, Leguminosae, Labiatae, Compositae and Euphorbiaceae plants species were used to cure the large number of human diseases(Abulafatih, 1987), which have been listed by Syed et al (Syed et al., 2017). In this review, elaborated details were given towards Leguminosae, Compositae, Labiatae and Euphorbiaceae herbal plant species which are used for the human treatment.

Compositae: Mainly the family compositae comes under angiosperms group. Altogether, 104365 species were documented under compositae family. Numerous studies shows the role of compositae of medicinal herbs in both immune and non-immune diseases as reproductive system diseases, Alzheimer’s, depression and anxiety disorders (Jafarinia and Jafarinia, 2019). Achillea biebersteinii (used for itching and revives from toothache), Conyza incana (relieves joint and muscle pains), Euryops arabicus (healing of the wound in the foot), Psiadia arabica (treated for rheumatoid), Senecio asirensis (for fever) and Targetes species (for cold and constipation) are involved in Compositae (Abulafatih, 1987).

Euphorbiaceae: The Euphorbiaceae are well-known for herbs, shrubs and trees. This family belongs almost 7300 species with 283 genera. It belongs to the similar family of Euphorbia bicolor. Genus Euphorbia is confirmed as world third largest flowering plants (Basu et al., 2019). This plant is visible globally and in Saudi Arabia is represented through Acalypha fruticosa, Euphorbia schimperiana, Jatropha species and Ricinus communis applied to treat skin disease, spine problems, laxative, vermifuge and also used to applied on the wounds. Ricinus communis will provide the castor oil (Abulafatih, 1987).

Labiatae: Labiate is also known as Lamiaceae known for mint which is firmly connected with Verbenaceae which has 236 genera between 6900-7200 plant species. Some of the largest genera are saliva, stachys, hyptis, vitex and nepeta. These plants are useful in preparing the drugs for Tulsi, peppermint, thyme, spearmint and coleus. The Lamiaceae family is known for its importance in the herbal medicines which involves large variety of plants in the medical purposes. Family members of these species are known to be aromatic which means mint, sage, basal, rosemary and lemon balm. It is also useful for the preparation of oils (Uritu et al., 2018, Raja, 2012).

Leguminosae: Leguminosae is also known as Fabaceae which incorporates the legumes as plants and fruits. Leguminosae is known for worlds third-largest group of plants have 730 genera in 19400 plant species. One of the major features of this family are the fruit of the plant and species ranges from dwarf herbs. Papilionodae, Caesalpinioideae and mimiosoideae are the sub-divisions of Leguminosae’s family. Legumes are nominally used for fixation of nitrogen; as legumes can convert atmospheric nitrogen into beneficial nitrogen fixation (Ahmad et al., 2016). Acacia negrii is used for treating retina issues, Cassia italica and Cassia Senna is for laxative, indigofera articulata is used for tooth problem and indigofera oblongifolia is used to remove dandruff(Abulafatih, 1987).

Ekor, M. J. F. I. P. 2014. The Growing Use Of Herbal Medicines: Issues Relating To Adverse Reactions And Challenges In Monitoring Safety. 4, 177.