Non- albicans Candida (NAC) species are responsible for 35-65% of all candidaemias in the general population and are associated with a high rate of morbidity and mortality (about 15% to 35%). The availability of few commercially used antifungal drugs against candidiasis and rapid emergences of antibiotic resistance among NAC species has significantly contributed to their increased global outbreak. Green tea is known for its multi-beneficial effects including antimicrobial potential against Candida. The present study investigated the molecular drug targets of green tea phytocompounds against inhibition of ergosterol biosynthesis in Candida glabrata using in silico tools.The molecular interaction was studied between ligands and essential proteins participating in ergosterol biosynthesis in C. glabrata using autodockvina software. The protein validation and homology modeling estimation were determined by the SWISS MODEL workspace.

The Drug likeness study of all the test ligands was performed using SwissADME, while the toxicity of test compounds was analyzed using the admetSAR 2.0 version.The in silico analyses identified Rutin, Chlorogenic acid, Coumaroylquinic acid, Quercetin, Epigallocatechingallate as the potent phytocompounds with significant molecular binding with Erg 6, Erg 27, Erg 8, Erg 7, Erg 24 respectively. The ADMET data suggested an absence of the CYP2 inhibitors indicating the metabolism of all the tested drug candidates in the intestine and liver.The present study highlighted the possible drug targets of green tea phytocompounds against ergosterol biosynthesis protein in C. glabrata. It is pertinent that the current study has provided preliminary breakthroughs which could lead to exploring their avenues in potent drug development against NAC species. .

These NAC species are also identified to be associated with a high rate of morbidity and mortality (about 15% to 35%) particularly in individuals who are immunocompromised like organ transplant recipients, HIV patients, and patients under chemotherapy (Krcmery and  Barnes 2002;Bitar 2014; Rudramurthy et al. 2017; Du et al. 2020).A progressive shift in NAC species infection has been linked with indiscriminate use of antibiotics, severe immunosuppressants in immune-compromised such as HIV, cancer or organ transplant patients.The studies have reported that several NAC spp. are inherently resistant to common antifungal drugs and have demonstrated acquired/cross-resistance against antifungals like triazoles (Du et al. 2020).

Indeed, with the availability of a few antifungal drugs commercially used in the treatment of candidiasis and rapid emergences of toxic side effects as well as antibiotic resistance among NAC species, the increased outbreak of NAC associated fungal infection are becoming a global threat (Magill et al. 2006; Pfaller and Diekema 2007; Oberoi et al. 2012; Deorukhkar et al. 2014; Chowdhary et al. 2014; Du et al. 2020).Green tea known for its multi-factorial health properties has been scientifically recognised as a possible antifungal drug representative that could along with standard chemotherapeutics enhance the efficacy of the general treatment approach.

In the present in silico study, we selected 15 phytocompounds present in green tea based on their reported antimicrobial activity against Candida spp. These phytocompouds were used as ligands for docking with the ergosterol biosynthesis proteins. Autodockvina(version is 1.1.2 ) tool was used for assessing the molecular interaction based on binding energies. As a positive control, we used azoles (Fluconazole, Itraconazole, and ketoconazole) and Amphotericin B in molecular docking analysis.The code of SMILES for all the aforementioned green tea phytocompounds and positive controls was procured from the online chemical database PubChem (https://pubchem.ncbi.nlm.nih.gov/) (Cheng et al. 2002; Diana et al. 2014).

The 2-D structures of the test ligands were retrieved by converting the SMILES code (.smiles format) into PDB (.pdb) format using chemical interconversion software Open Babel (v 2.3.1). The Drug Likeness reports of all the test ligands were prepared by submitting individual SMILES code for each drug to SwissADME. The toxicity of test compounds was analyzed using the admetSAR 2.0 version (Cheng et al. 2002; Diana et al. 2014).

The 3-D structure of all the proteins participating in the ergosterol biosynthesis was retrieved in PDB format (Table 3) using the PHYRE program (Kelly 2009). The amino acid sequences of ERG proteins in FASTA format were obtained from NCBI [https://www.ncbi.nlm.nih.gov/]. The 3D-protein homology models were generated from the SWISS-MODEL workspace.The protein homology models were validated through a Ramachandran plot created in the SWISS-MODEL workspace.The Molecular interactions were studied for the ERG proteins and the selected phytocompounds as well as positive controls using Autodockvina software. The autodocking tool generated the binding energies of molecular interaction between all the green tea phytocompounds and respective PDB proteins of ergosterol biosynthesis (Waterhouse et al. 2018).

In silico docking analysis: The in silico analysis demonstrated significant molecular interaction between ligands (Tables 1) Positive controls (Table 2) and the docked ERG proteins(Table 3). Among the 15 phytocompounds tested, Rutin and ERG 6 showed the most stable molecular interaction with the least binding energy of -10.80 kcal, compared to the positive control antifungal drugs. It is considered that least the docking energy, the higher will be the binding affinity of a compound with the target protein. Hence, Rutin demonstrated the best interaction among all the investigated green tea phytocompounds. 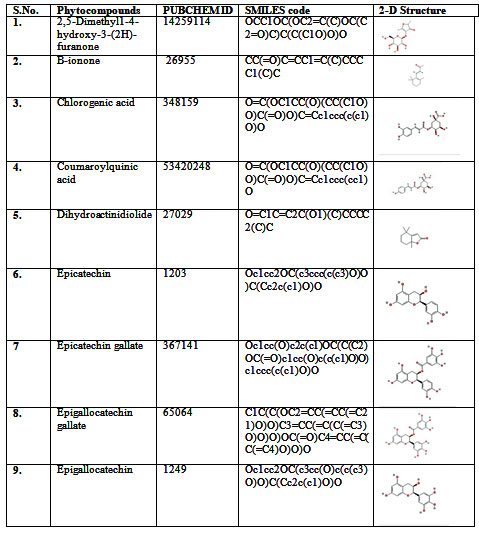 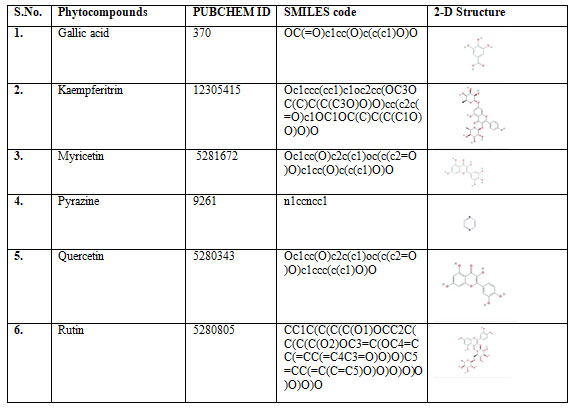 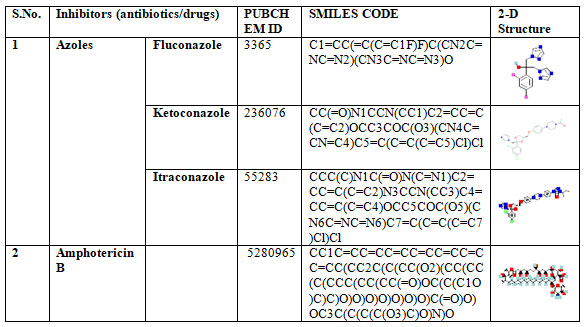 The Ramachandran plot depicted structural stability and showed confirmation of residues in the favorable region (Figure 1; Table 4). A Ramachandran phi-psi plot for all ERG proteins revealed 82.49% to 100.00% of residues are in the allowed region (light gray), and only 0.00% to 4.44% lay in the disallowed region (white). The above analysis of the predicted structure provides supporting evidence that the predicted 3D structure of ERG protein is of good quality.The protein models of ERG proteins showed local similarity to the crystal structures of target templates (Table 4). The Q mean value of protein models was reliable as depicted in the estimated Figure 2. Based on the binding scores, rutin interacted with ERG 6 at the amino acid residues TRY-84, SER-95, GLY-251, ASN-284, TRY-288, ARG-314, PHE-318, and LEU-344 with the least binding energy of -10.80 kcal (Figure 3, Table 5, Table 6, Table 7) (Gao et al. 2020; Anand et al. 2021).

Mammalian metabolism and toxicity of all the proposed green tea phytocompounds as potent antifungal drug agents were tested through ADMET analysis. The ADMET analysis depicted that out of 15 ligands, 13 compounds are non-toxic and obeyed Lipinski’s rule of five. The drug likeliness report determined that Kaempferitrin, rutin, and EGCG are toxic as they have violated two to three rules from Lipinski’s rule of five. Their toxicity level could restrict its application as a potent candidate for antifungal agents; however, before their therapeutic application, the dose regime of these drugs is necessary to be considered and analyzed for the drug toxicity.

The solubility, dissolution, and GI permeability of any drug are essential parameters to be determined before their associated medical effect can be induced. These factors are rate-limiting steps for pre-formulation interpretations in drug development (Shekhawat PB and Pokharkar, 2017; Mitra et al. 2021). In our study, Dihydroactinidiolide and B-ionone, epicatechin, Epigallocatechin, gallic acid, pyrazine, and Quercetin demonstrated high GI absorption, while other ligands were observed to be considerably soluble (Gao et al. 2020; Anand et al. 2021).

Concerning drug potency, the ability of drugs to cross blood-brain barriers (BBB) is estimated. The present study estimated and indicated poor membrane permeation properties of all the tested 13 ligands except Dihydroactinidiolide and B-ionone (Table 8). CYP2 are the family of drug-metabolizing subsets that are involved in the biotransformation of drugs, xenobiotics). The ADMET data suggested an absence of the CYP2 inhibitors indicating metabolism of all drug candidates in the intestine and liver (Table 8) (Tran 2011; Palleri et al. 2013).

The Bioavailability score which is an integral part of the pharmacokinetics paradigm was evaluated less than a standard score of 0.55 for chlorogenic acid, EGCG, kaempferitrin, and rutin and thus depicted their poor bioavailability (Martin 2005). The co-existence of CYP3A4 and Pgp at the same site acts synergistically to reduce the bioavailability of the drug (Mohamed and El-Kadi 2012). Recent studies have also reported  poorbioavalibility ofRutin,  EGCG, however novel identified transporter system in human can regulate the increase the bioavailibilty of EGCG (Ishii et al. 2019; Fatima et al. 2020). 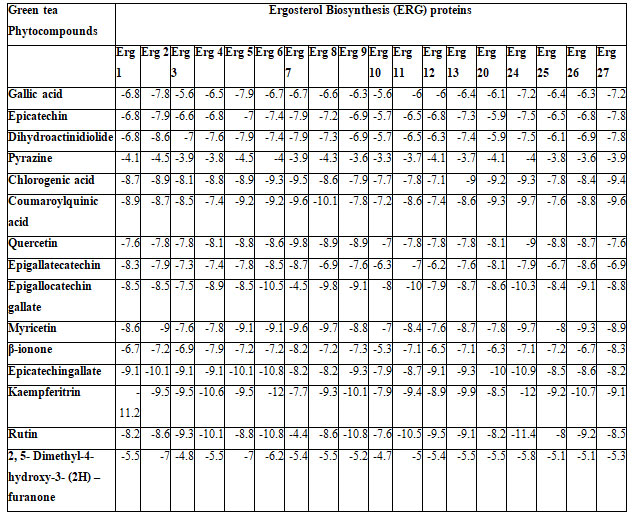 Table 7. Most favorable docking poses for the molecular interaction between green tea ligands and ERG proteins. 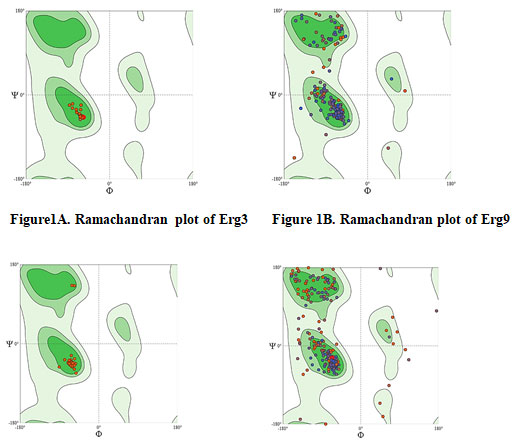 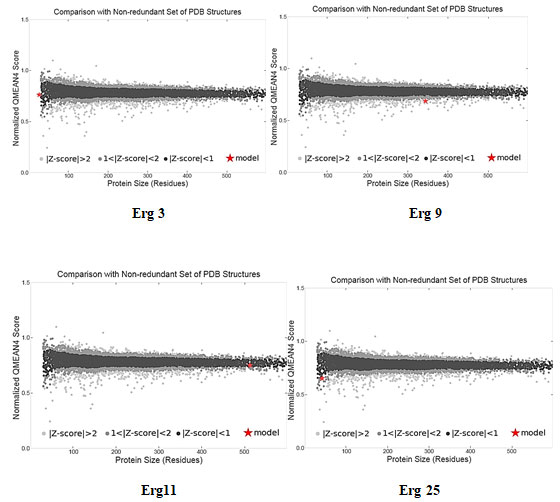 Figure 3:  Molecular Docking images of interaction via in silico study. 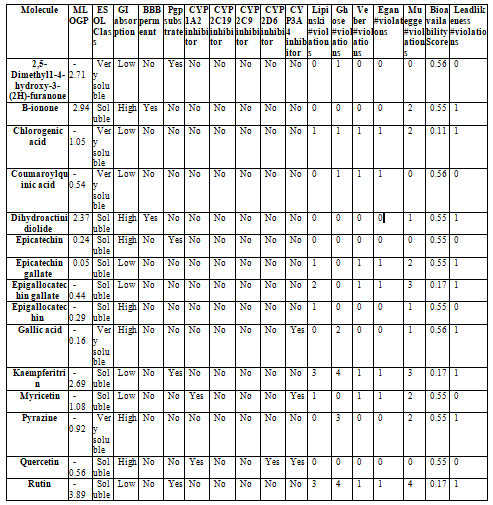 The findings of the present study highlights the antifungal drug targets of green tea phytocompounds against inhibition of ergosterol biosynthesis in Candida glabrata. Rutin, Chlorogenic acid, Coumaroylquinic acid, quercetin, EGCG were screened as the most active green tea phytocompounds with Erg 6, Erg 7, Erg 8, Erg 24, and Erg 27 in ergosterol biosynthesis pathway as their possible drug targets. The poor bioavailability of rutin, chlorogenic acid, and EGCG is a limiting factor and needs further investigation to enhance their bioavailability. The current study is a preliminary analysis that needs to test in vitro to explore the future avenues of potent drug development against NAC species.

Conflict of Interests: Authors declare noconflicts of interests to disclose.