Vancomycin resistant Enterococcus faecalis is concern for both public health and medical importance associated with serious for multidrug resistant infectious and also resistant for last resort antibiotic. It is an opportunistic pathogen which represents one of the agents of nosocomial infection in hospitalized patient. The aim of the present study was to determine the cell wall thickness by transmission electron microscopy and uncovering of resistant gene responsible gene for the vancomycin resistance E. faecalis strains isolated by clinical samples from Gulbarga region. Isolation and identification of E. faecalis of clinical isolates were done by using standard culturing and screening protocol. Antibiotic susceptibility and MIC were determined by using disc diffusion and broth dilution method. The thickness of cell wall of the stains was study by using TEM and vanA gene was detected by Polymerase Chain reaction.

Enterococci are commensal organism that acts as opportunistic pathogens. Currently, they have been studied to be among leading pathogens of nosocomial infections, and thus they are a major international health burden (Dulber et al., 2020).Among the enterococci, Enterococcus faecalis cause 80-90 % of infections and it is a gram-positive commensal member of the gut microbiota of wide range organisms. With the advent of antibiotic therapy, it has emerged as multidrug resistant, hospital acquired pathogen (Daria et al., 2013). It majorly causes in humans such as bacteremia, endocarditis, intra-abdominal, pelvic infections and urinary tract infections. However, inappropriate vancomycin use has resulted in the emergence of Vancomycin resistant enterococci (VRE) and capably of transferring the resistance gene to another organism. VRE infection can be acquired through colonization with VRE or hospital environmental (Jatapat et al., 2019). Enterococci gladly accrue mutations and exogenous genes that confer additional resistance. They develop resistance to vancomycin by exchange of genetic material among themselves and or with another genera. The enterococci may acquire resistance through van associated genetic elements like vanA, vanB, vanD, vanE, vanG, Van L of which vanA and vanB are the most prevalent genotypes in clinical isolates (Addisu et al., 2020).

In Asian countries the prevalence was decreased may due to recent emergence of this resistance in this continent and only a handful of studies to document. The prevalence of VRE in India has been reported the highest was in New Delhi with 23%, Chandigarh 8% and lowest in Mumbai with 5.5% respectively and all of vanB phenotype study reported by Manimala et al., (2019).Transmission electron microscopy will insightful impact on understanding of bacteria and other microbial populations, it provides the 1000 fold improvement in resolution and allows to find the minor changes in topological and structure of bio-membrane organelles. (Shruthi and Vivek 2017).It is important to study the prevalence, pattern of resistance especially in this region of South India which has very few reports on Enterococcus faecalis. The present objective of the study to better understand the antimicrobial action and changes in cell wall thickness induced by vancomycin in E. faecalis.

Isolation of Enterococcus faecalis: The samples were examined for the presence of pathogenic. In the present study bile esculin azide agar was used for primary isolation of E. faecalis. Microscopic observation was done for confirmation and subculture again 3 to 4 times to isolate pure culture of E. faecalis. The single isolated colony was inoculated in BHI broth and incubated at 37°C for 18 hrs, glycerol (30%) were used for preparation of stock culture and stored in -80 °C for further use.

Transmission Electron Microscopy:TEM was performed for the morphological characterization of the cell wall ultra-structure of GREF and VREF isolates. The protocol for the preparation and examination was followed as described earlier (Hanaki et al., 1998). The overnight culture was centrifuge at 8000 rpm for 10 mins 4º C, the supernatant fluids were discarded, and the cell pellets were washed twice with 50 mM potassium phosphate buffer (pH 7.0). Bacteria were then fixed in 3 % glutaraldehyde (in 0.1 M sodium phosphate buffer, pH 7.2). Then followed bacteria were fixed with 3% glutaraldehyde for overnight at 4º C. For high contrast amplification, the bacterial cells were treated with 2 % uranyl acetate in 95 % alcohol for 1 h at 20º C in the dark. Infiltration is done with help of araldite propylene oxide (1:1) solution for five times. Cells were subjected to dehydration with 70 % ethanol for 18 hrs in acrylic resin. The ultra-microtome was used to prepare ultra-thin section, finally stained with lead citrate and uranyl acetate and examined under Transmission electron (Techn G2 Spirit TEM, at 80 KV).

Plasmid DNA Analysis:The plasmid isolation kit (Bangalore gene pvt.ltd) were used for the extraction of  Plasmid DNA from vancomycin resistant isolates by user manual of kit, further it was analyzed in 0.8% agarose gel electrophoresis containing 5 μg/mL of ethidium bromide at 3.5 V/ cm for 4 h in a Tris EDTA buffer (TAE). Molecular markers were used as a size reference for molecular determinations.

vanA Gene Ampliﬁcation:Plasmid DNA from vancomycin resistant enterococci isolated by the plasmid isolation kit (Bangalore gene pvt. ltd) were subjected to ampliﬁcation assays employing the oligonucleotide forward primer (5’-GGGAAAACGACAATTGC-3’) and reverse primer (5’-GTACAATGCGGC CGTTA-3’) and amplification conditions as described by (Dutka et al.,1995). The PCR reaction consisted of Initial denaturation at 94 ˚C for 10 mins, followed by 35 cycles of denaturation to 94˚C for 30 secs, annealing to 47 ˚C for 45 secs, then extension to 72˚C for 30 secs. Followed by final extension at 72 ˚C for 10 mins. The amplified products were resolved by electrophoresis on a 1% Agarose–TAE gel containing gel red.

Bacterial Isolates and Antimicrobial Susceptibility Test: In  the present study, strains of E. faecalis were isolated from clinical samples A total of 250 samples were collected, among them 122 have showed positive for different clinical isolates. The E. faecalis 76 (62.29 %) was the predominant isolates from urine, pus, CSF and blood samples. The E. faecalis isolates were Gram positive. The biochemical characteristics for the all isolates were positive for tellurite reduction and arginine hydrolysis, arabinose, raffinose and mannitol expect for catalase sorbitol and lactose.  The results of the susceptibility tests are carried out by disc diffusion method for 76 E. faecalis strains showed resistant to the different antibiotic like vancomycin (77.63%), gentamycin (64.47%) and oxacillin (55.26%) antibiotics, and were multi drug resistant. The isolates were found sensitive to rifamycin (61.84%), teicoplanin (55.26%) streptomycin 52.63%) and tobramycin (51.13%).

Transmission Electron microscopy:TEM was employed to examine the cell morphology (especially cell wall thickness) of E. faecalis in in-vitro using gentamycin and vancomycin. Using broth dilution method, E. faecalis (GREF 122 and VREF 122) was adapted during MIC study and further sub cultured and stored at -80º C (expressed high MICs, ≥1024 µg/ml and 128 µg/ml). To ensure the resistance mechanism of E. faecalis to gentamycin and vancomycin, the TEM was carried out along with control isolates (EF122 and NCIM 5025). The isolates showing baseline resistance of 16 µg/ml MIC were subjected to chemical fixation prior to examination.

Plasmid DNA analysis and vanA gene amplification: Figure 3. Reports the plasmid profile of human clinical isolates. The two isolates 121 and 122 are independently of their origin had more than one plasmid with different molecular weight. Among the observed plasmid, those ranging from 2 strains, more than one plasmid species were detected in isolates. Among the observed plasmids, those ranging approximately from 21 and 19 kbp in molecular size. (Not data shown) shows an example of amplification of the 352 pb fragment in plasmid DNA of isolates, confirming the affiliation to the vanA gene cluster. This result also demonstrates the extra chromosomal location of the glycopeptide resistance determinants. The amplified PCR product was sequenced and submitted to NCBI (Acc .No JN791694). 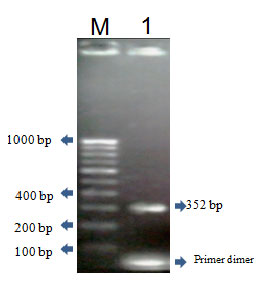 Drug resistant infectious provides opportunities to address the associated clinical and public health burden on individuals, health systems, and society, (Olaniyi et al.,  2020). Worldwide there is a trend in increasing of vancomycin resistant enterococci ever since first described in 1987, although the epidemiology of these microorganism varies widely in different geographical areas (Hossein  and Mohammad 2014). E. faecalis   has  recently  evolved  from  a  generally  a virulent commensal  into an multi-drug resistant healthcare-associated  pathogen  causing  difficult-to-treat  infections. Therefore, studies of E. faecalis resistance have increased. The most species distribution of the enterococcus species was E. faecalis with (81.72%) isolated, followed by E. faecium (12.9%) as reported by Jahnabi et al., 2016. In recent study they have been reported has (64%) of E. faecalis and E. faecium (36%) in Chennai, India (Alexander et al., 2020).

In our studies E. faecalis occurrence was (62.29%) the difference may be due to geographical variation. Vancomycin resistance was high with numbers of screened isolates were less 28/31 (90.62%) reported in North Indian tertiary care hospital (Hibs et al., 2020). In the year 2016 a study showed high rate (35.3%) of VRE carriage as compared to studies that have estimated comparatively low VRE colonization on admission to the ICU from Europe (2.7%), US (12.3%), South America (7%) and other Asian countries (5.3%) (Prakhar et al., 2016). In our study, about 77.64 % of E. faecalis strains showed high resistant to vancomycin by disk diffusion test and MIC of 12 strains as showed ≥ 64 to ≥128 μg/ml for vancomycin respectively. The last therapeutic resort for enterococci was vancomycin.

Transmission electron microscopy has been invaluable tool in imaging bacteria and their components. The first report to show cell wall thickening was in S. aureus following treatment with acriflavine. Beta-lactam antibiotics which inhibit cell wall synthesis cause marked thickening of the cross wall in Staphyloccocci. MRSA has showed that vancomycin is affinity trapped inside the peptidoglycan layers by false targets, resulting in peripheral wall thickening (Mako and Jun 2009). In present study the isolate vancomycin resistant E. faecalis EF122 showed lesser thickness of cell wall and septum compared standard strain NCIM E. feacalis 5025 when grown in the medium without vancomycin. In contrast, when the isolate exposed to 16 µg/ml of vancomycin and gentamycin increased thickness of cell wall was 9.564 nm and 16.566 nm against gentamycin and vancomycin, whereas in case of septum 26.868 nm and 27.456 nm with gentamycin and vancomycin respectively.

In our study PCR proved helpful in detecting the van genotypes present in this geographic region. The study reveals an expression of vanA gene in the E. faecalis strain with 352bp fragment in the plasmid DNA and it confirms isolates the affiliation to the vanA gene cluster and the extra chromosomal location of the glycopeptide-resistance determinants. The vanA type resistance is dominant in the United States and Europe whereas vanB type resistance is more frequent in Australia and Southeast Asia, (Nerfis and Baris 2020). However, VRE strains carrying vanB or both vanA/vanB have reported in various countries (Coombs et al., 2014, Marcade  et al.,  2014, Papagiannitsis et al.,  2017).In India the most of strains of VRE has showed the vanA genotype (Hiba et al., 2020). In our study, the increase in the rate of prevalence of E. faecalis and emergence of multidrug resistance among them (Ajay et al., 2012), highlights the significance of rapid and accurate in identification of enterococci to the species level for imitating appropriate therapeutic regimen, and reemphasizes the importance of the implementation of appropriate infection control measures to limit the nosocomial spread of these unusual species in any nosocomial.

ACKNOWLEDGMENTS: The first author is grateful to Council Scientific and Industrial research for  Senior Research fellowship (CSIR-SRF New-Delhi, India) and enabling him to complete the research work.

Authors Contributions: All authors have equal contribution in bringing out this research work

Conflict of Interest: None