Lung cancer is uncontrolled cell growth in tissues of the lung. Most cancers that start in the lung, known as primary lung cancer, are carcinomas. Glycyrrhiza glabra produced bioactive compounds were isolated through GCMS. Thus in the present investigation, bioactive compounds fromG. glabra, were screened and identified through molecular docking. EGFR is important lung cancer progression, invasion and metastasis. So it is used as one of the most potent pharmacological target for lung cancer. 3D structure of target protein EGFR retrieved from Swiss-Prot database. Molecular docking studies revealed that bioactive compounds from G. glabra had very good interactions with EGFR protein molecule. Out of 19 bioactive compounds top two 2,2′-dioxospirilloxanthinand Pregn-5-en-20-one were identified as potential drug molecules against EGFR. These compounds had acceptable binding energy values and could be used for further in-vitro validation. In conclusion, the present study explained traditional phyto constituents from G.glabracould be further promoted as potential lead molecule against EGFR to control ovarian cancer. More photochemistry and molecular studies required to reaffirm the work

INTRODUCTION
Lung cancer is the most frequently diagnosed of all cancers and occurred in 1.8 million people in worldwide in 2012 and responsible for 1.8 million deaths (Ferlay et al.,2012). There are two main types of lung cancers:  small-cell lung cancer (SLCL) and Non-small-cell lung cancer (NSCLC). The most common form of lung cancer is NSCLC and first-line  of treatment often involves platinum-based combination chemotherapy (Zappa and Mousa, 2016). Epidermal growth factor receptor (EGFR) is a protein on the surface of cells. It normally helps the cells grow and divide. Some NSCLC cells have many EGFR, which regulates cell proliferation, apoptosis, angiogenesis, and tumor invasion. Drugs called EGFR inhibitors can block the signal from EGFR that helps the cells to grow, (Herbstet al., 2008). Now a days many drugs can be used alone without chemotherapy to treat NSCLC such as Erlotinib (Tarceva), Afatinib (Gilotrif), Gefitinib (Iressa), Osimertinib (Tagrisso) and Dacomitinib (Vizimpro).However the most common side effects of all EGFR inhibitors were include skin problems, diarrhoea, mouth sores and loss of appetite. Therefore, there is an urgent need for development of new improved drugs  to avoid concern to the patients, hence researchers are looking alternative medicines from the natural sources using computer aided drug designing programmes (Newman and Cragg, 2010; Hoelderet al., 2012). Almost 60 percent of drugs approved for cancer treatment are of natural origin. Glycyrrhiza glabra Linn is one of the most widely used herbs from the ancient medical history of Ayurveda, both as a medicine also as a flavouring herb. This plant is also pharmacologically studied for its anti-ulcerogenic,antioxidant, antimicrobial, and anti-inflammatory properties,(Pastorinoet al., 2018).

Glycyrrhiza roots are useful for treating cough also effective against anaemia, gout, sore throat, tonsillitis, flatulence, sexual debility, hyperdypsia, fever, skin diseases and swellings. G. glabra is considered as one of the best remedies for relieving pain (Parvaizet al., 2014).Thus in the present investigation, bioactive compounds from G.glabra, were screened and were  attempted to identify the  potential molecule  which can act as EGFR inhibitor using molecular docking methods.

Collection of plant materials:Fresh roots of G. glabra was collected from the Madurai, Tamil Nadu.The taxonomic identity of the species was authenticated by comparison with herbarium voucher specimens deposited in the Herbarium Sri Paramakalyani Centre for Environmental Sciences Manonmaniam Sundaranar University Alwarkurichi-627412 Tamil Nadu. The leaves and roots were washed under running tap-water, shade-dried, powdered mechanically in a mixer grinder, sieved and stored in an airtight container for plant extract preparation.

Plant extract Preparation:The powdered plant materials were subjected to successive solvent extractions as follows. The powder was placed in a 1-L thimble of a Soxhlet apparatus and extracted with petroleum ether (40–60°) (Merck, Mumbai, India) for 72 hours in four batches of 250 g each. Before each extraction, it was dried at room temperature. All the extracts were filtered and concentrated in a vacuum with rotary flash evaporator (Büchi, Flawil, Switzerland). Leftover solvent was completely removed in a water bath, and the extracts were dried in a desiccator. The crude extracts obtained from each solvent were labelled and weighed, and the percentage yield was recorded. The crude petroleum ether extract of Glycyrrhiza glabra was then subjected to qualitative tests to determine the bioactive constituents

Isolation and characterization of bioactive compounds:The powdered sample were soaked and dissolved in methanol for 24 h. Then the filtrates were collected by evaporated under liquid nitrogen. The samples were injected in split mode as 10:1. Mass Spectral scan range was set at 45-450 (mhz).GC-MS analysis was done on a Thermo Trace GC Ultra coupled with Polaris Q MS and TriPlus auto-sampler using a DB-5 (0.25 mm × 30 m × 0.22 μm) column in which helium was used as carrier gas. GC-MS analysis was performed as per mehtod described by Ivanova et al., 2005.Shortly described here, the temperature was set between 50°C to 250°C at a rate of 10°C min-1. The initial temperature was held for 2 min and final temperature of 250°C was held for 10 min. The GC flow rate was 1 ml min–1 and the total run time was 32 min. MS was performed at scan mode between 0 – 600 m/z with an Ion trap EI+.

The instrument was set to an initial temperature of 110°C, and maintained at this temperature for 2 min. At the end of this period, the oven temperature was raised up to 280°C, at the rate of an increase of 5°C/min, and maintained for 9 min. Injection port temperature was ensured as 250°C and Helium flow rate as 1 ml/min. The ionization voltage was 70 eV. The samples were injected in split mode as 10:1. Mass Spectral scan range was set at 45-450 (mhz). The chemical constituents were identified by GC-MS.The fragmentation patterns of mass spectra were compared with those stored in the spectrometer database using National Institute of Standards and Technology Mass Spectral database (NIST-MS). The percentage of each component was calculated from relative peak area of each component in the chromatogram.

Molecular docking studies:EGFR enzyme plays a crucial role in causing lung cancer. Thus, it is considered as potential target protein and EGFR is retrieved from UniProtKB/Swiss-Prot database (http://www.uniprot.org/). A list of bioactive compounds was retrieved from G. glabrausingChemspider database (http://www.chemspider.com/) and further these compounds were considered as ligands. Two dimensional structures of these ligands were converted into 3D structure using swisspdb viewer (http:// www.spdbv.vital-it.ch/). The Protein-ligand interaction plays an important role in structural based drug designing. In this study molecular docking analysis between target protein (EGFR) and ligand molecules from G.glabra was carried out by Hex8.0 docking program (http://www.hex.loria.fr/dist50/). It was performed by adjusting appropriate parameters such as twist range-360, receptor range-180,ligand range-180, FFT mode-3D fast lite, grid dimension-0.6 and distance range-40. The obtained scores of binding energy was tabulated and analysed.

In herbal medicine literature, G. glabra plays an important part in Ayurveda and Siddha arrangement of drug acting as ulcer protective, demulcent, expectorant, anti-tussive and purgative the utilized for therapeutic purposes and it is additionally pre-clinically and clinically the most focused one (Amarowiczet al., 2004; Chin et al., 2007).  Thus, in the present investigation we attempted to analyze the bioactive compounds of G.glabra compare drug interaction properties with EGFR, which is potent lung cancer causing receptor.

In this study, alcoholic extracts of G. glabra were analyzed and isolated 11 new phenolic compounds, glycybridins A–K (1–11), along with 47 known compounds.The chemical structures of extracted compounds were elucidated on the basis of extensive NMR and MS analyses as well as experimental and computed ECD data. 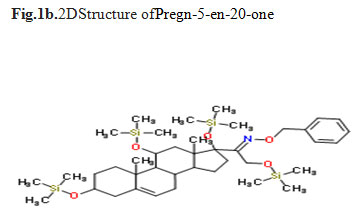 For insilico studies, all 19 bioactive compound structures were retrieved from Chemspider database.

EGFR:The epidermal growth factor receptor (EGFR) belongs to the ErbB family of receptor tyrosine kinases (RTK). These trans-membrane proteins are activated following binding with peptide growth factors of the EGF-family of proteins. Evidence suggests that the EGFR is involved in the pathogenesis and progression of different carcinoma types including lung cancer (Normannoet al.,2006).So, in the present study UniProtKB/Swiss-Prot database was used to retrieve EGFR and considered as target molecule (antigen). EGFR was formed by a single polypeptide chain with 327 amino acids. The polypeptide is composed of 352 sheets connected by 198 H-bonds with 1182 helices in its structure (Fig.2). This receptor is also an effective antigen of many cancer types, which induces lung cancer. EGFR is having 10 ligand binding sites on its surface. One of the binding sites suitable for a particular ligand acts as the active binding site by which an energetic molecular docking takes place (Fig.3). The area of the 10 possible ligand binding sites is ranging from 73.1 to 1228.9 Sq Å and the volume from 51.8 to 2055.7 Cu Å. 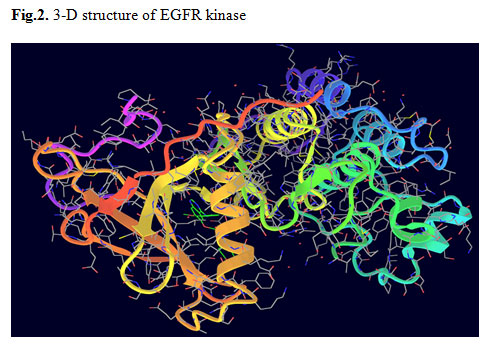 Prediction of binding sites: In order to find out the most effective drug among the 19 bioactive compounds extracted from G. glabra, molecular docking was carried out against EGFR kinase using Hex 8.0software. The docking scores were ranging from -231.83 KJ/mol to -386.25KJ/mol (Table.1). 2,2′-dioxospirilloxanthin (Fig.4) and Pregn-5-en-20-one(Fig.5) were selected as they showed a strong interaction and binding with target protein having best docking scores when comparedto other tested ligands. 1,7-Dioxa-4,10-diazacyclododecane-4,10-diethanol have scored low energy value -231.83. 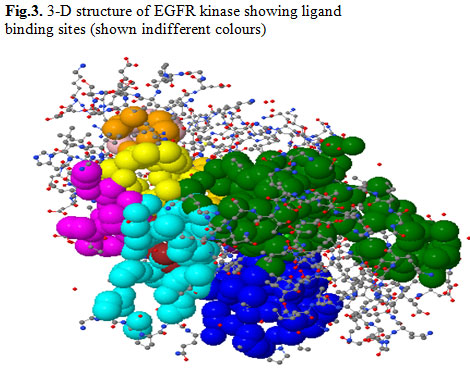 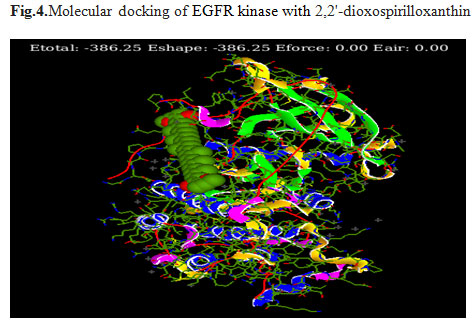 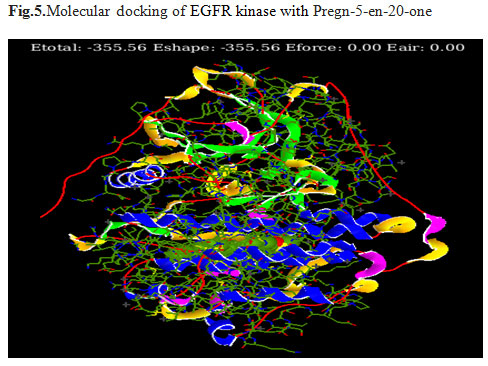 Thakur and Raj (2017) reported that pharmacological activities, characterized secondary metabolites and traditional uses of G. glabra warrants its potential therapeutic uses. However, further scientific validations along with evidence-based studies are still required in support to its traditional uses, to serve as “lead” for development of novel agents and a better drug candidate in future. There is currently no clinically proven hormonal therapy for lung cancer. However, there is several estrogen modulating treatments that are widely used in breast cancer which could be explored in lung cancer therapy (Li et al., 2017).  Hence the present study will helpful to understand the potential drug candidate to effectively bind and inhibit EGFR.

In conclusion, from the list of 19 bioactive compounds retrieved from the data bank of G. glabra, two, 2,2′-dioxospirilloxanthinand Pregn-5-en-20-one were identified by selecting the suitable ligands for EGFR protein receptor for controlling lung cancer. A complex between 2,2′-dioxospirilloxanthin and EGFR molecular docking studies reveals best dock score-386.25 KJ/mol. Thus, we concluded that 2,2′-dioxospirilloxanthin could inhibit EGFR protein and consider as potential drug candidate against treating lung cancer and further in vitro studies are required to confirm these results. The molecular docking in the current study was concrete enough to discover the binding mechanism and interaction between the 19 different compounds, which are the ligands and EGFR. The results obtained in this study shall be useful for future drug designing and development of novel compounds with higher inhibitory activity against EGFR. However, it is mandatory need to validate these compounds in in-vitro and in-vivo studies for establishing them as potential novel drug candidates.