Analysis of Microbial Pollution in the Seawater of the Aqaba Gulf, Saudi Arabia

Analysis of Microbial Pollution in the Seawater of the Aqaba Gulf, Saudi Arabia

Seashores are vital areas for countries in various areas and are centers of attraction for tourists and residents to spend the times of tranquility and entertainment. The present study is aimed to ensure the presence of microbial pollution in the Gulf of Aqaba waters adjacent to the city of Haql, Saudi Arabia. The study was carried out during the period between February and May 2018. Four sites were sampled from the study area. Elements were found in the seawater of the Aqaba Gulf of the Red Sea such as Ammonia, Nitrate, Sulfate, and Chloride. Moreover, total dissolved solids were 38100, pH 8.62 and turbidity 0.25. The Biochemical oxygen demand was found to be 28 mg/L. Moreover, chemical oxygen demand (Dichromate) was 3040 mg/L. The Total Kjeldahl Nitrogen was <1.00 mg/L. Bacteria, fungi, and coliform were present in all the collected samples from the four sites. Escherichia coli  was found to be 2 CFU/mL. This study demonstrates that there was microbial pollution in the seawater showing E. coli isolated from all the samples.

Al-Solami M. A. Analysis of Microbial Pollution in the Seawater of the Aqaba Gulf, Saudi Arabia. Biosc.Biotech.Res.Comm. 2020;13(1).

Al-Solami M. A. Analysis of Microbial Pollution in the Seawater of the Aqaba Gulf, Saudi Arabia. Biosc.Biotech.Res.Comm. 2020;13(1). Available from: https://bit.ly/33CH0Oo

Seashores are exposed to various anthropogenic activities such as tourist visits, surfing, fishing, industries, etc. which adversely affect the quality of coastal waters. Beaches are contaminated by many pollutants, which creates two main types of pollutions, the first type is natural pollution, and appears in the change of water temperature, or increase its salinity, or the increase of suspended substances. The second type is chemical pollution, caused by wastewater, oil spill, agricultural residues including pesticides and fertilizers. The Red Sea has two large gulfs, and the Aqaba Gulf (24 km wide, 800 to 1800 m deep) is one of them, located to the east of the Sinai Peninsula and west of the Saudi Arabia (Suggett et al., 2009). Oligotrophic oceanic waters of the Gulf is recognized as a deep winter mixing and intense summer stratification; consequently, these waters experience strong seasonal changes of the predominant limiting factor for microbial growth (Mackey et al., 2007; 2009; Overmans and Agusti, 2019).

The main elements for nutrients in the Gulf are changed in the winter to the nitrogen: phosphorus ratio (N:P) close to the ‘Redfield ratio’ (N:P = 16) (Hase et al., 2006; Asmala et al., 2017). These conditions will affect eukaryotic algae to be dominated but growth is limited by light availability with deep mixing (Al-Najjar et al., 2007).Microbial contamination of water means the presence of organisms visible or invisible to the naked eye, whether plant or animal in the aquatic environment. Water pollution is often caused by certain pathogenic microorganisms, such as bacteria, viruses, parasites, algae, and protozoa, or by aquatic plants and animals. Contaminants from pathogens are often caused by the mixing of human and animal waste with water, either by direct discharge into water bodies, or indirectly by mixing with sewage . The presence of this type of pollution leads to many diseases. Therefore, this water should not be used for washing or drinking, unless it has been treated with various sterilizers, such as chlorine, ozone, mechanical filtering, and other treatment systems. However, northeastern portion of the Gulf of Aqaba contains high concentrations of metal pollutants discharged into the water of the Gulf from permanent sources of pollution (Abu-Hilal and Badran, 1990). Abu-Hilal and Badran (1990) also reported that the most polluted sites in a port area and near sewage outlets, the surface and vertical distributions of trace elements are similar to the distributions of organic carbon, total phosphate-phorous and fluoride which were derived over the past three decades from local release from deposited phosphate rock particles, raw sewage, old barges, boat and ship activities in addition to the recent industrial discharges in the southern section of the study area (Abu-Hilal and Badran, 1990; Crosby, 2017).

Many pathogenic microbes have been documented in the seawater, which are often associated with water contamination of sewage products, the most important of which are Salmonella typhi, Salmonella typhimurium, and Escherichia coli, which are responsible for many human poisonings (EPA, 2011). There are also many animal protozoans and some viruses. Several bodies are interested in such tests that determine the validity or pollution of water, including the World Health Organization (WHO), the International Organization for Standardization and Metrology (ISO) and the Saudi Arabian Gulf Standards Organization (SASO). Other researches in Agaba Gulf reported different types of microorganisms such as Escherichia coli, fecal streptococci, and staphylococcus aureus (Evans 1977; Yoshpe-Purer and Golderman, 1987, EL-Shenawy, 2005).

The present study was carried out to ensure the presence of microbial pollution and to test the quality of thw water of the Gulf of Aqaba adjacent to the city of Haql, Saudi Arabia.

Sample collection:The study was carried out during the period between February and May 2018 in the northern Gulf of Aqaba from the Saudi Arabian site in the City of Haql. During the cruise, 8 sites were visited, but we sampled only 4 sites of a transect across the Gulf of Aqaba (Fig. 1). Each site was visited at least twice. Water was collected with 1 L polyethylene (PE) flasks for further measurements.

Figure 1: The study sites in Haql city on the Gulf of Aqaba 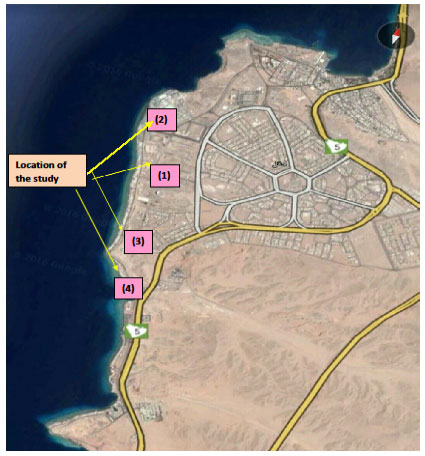 Microbial analysis:Samples for enumerating bacteria were fixed with 2% formalin. Enumeration was done by epifluorescence microscopy according to Porter and Feig (1980). Within 2 h of sampling, 2 to 5 ml were stained with DAPI (4,6-diamidinophenylindole) for 3 to 5 min, filtered through 0.2 µm black Nuclepore filters, and stored frozen at –20 °C until enumeration in the laboratory 6 mo later. Bacterial numbers were determined at 1000× magnification with an epifluores.

Table 1. Elemental analysis in the water of the Gulf of Aqaba, Haql, Saudi Arabia

For total dissolved solids in seawater which was found to be 38100 mg/L (Table 2). In the four samples taken. The pH found the results as 8.62. The turbidity of water in the sample areas was 0.25 NTU. The Biochemical oxygen demand was found to be 28 mg/L (Table 3). Moreover, chemical oxygen demand (Dichromate) was 3040 mg/L. The total Kjeldahl nitrogen was <1.00 mg/L.

Table 2: Total dissolved solids, pH and turbidity in the water of the Gulf of Aqaba, Haql, Saudi Arabia

The microbiology test was found that bacteria were present in all samples (Table 3). The bacteria count were 1000 CFU/mL and total Coliform were 100 CFU/mL. The Escherichia coli   were found to be 2 CFU/mL. Moreover, fungi were in the range of 3000 CFU/mL (Table 4).

Table 4. Total bacteria count, Total coliform, E.coli and fungi in the water of the Gulf of Aqaba, Haql, Saudi Arabia

This is the first study on the elemental analysis, hydrographical analysis, and microbial analysis of the seawater of the Aqaba Gulf of the Red sea at the Saudi Arabian side. The elements found in the seawater were in the average showing NH3 as total as N 11.24 mg/L, NO3¯ 2.4 mg/L, sulfate 2175 mg/L, fluoride mg/L, total Phosphorus 0.06 mg/L, chlorine residual total 0.03 mg/L, sodium 15000 mg/L, Chloride 22400 mg/L, and Iron 0.05 mg/L. Sawatrai (et al., 1996) found similar results when they determined the multielement of trace elements in coastal seawater by ICPMS and ICP-AES after aluminum coprecipitation associated with magnesium.

In this study, the total dissolved solids were found in the range of 38100 mg/L and the pH was 8.62. Moreover, the turbidity of the water sample was 0.25 NTU. Furthermore. the biochemical oxygen demand was found to be 28 mg/L, chemical oxygen demand was 3040 mg/L and the total Kjeldahl nitrogen was <1.00 mg/L. These results were different from what Batayneh et al. (2014) found in the Aqaba Gulf of the Red sea on the Saudi Arabia when they tested the pH and found it 7.02 to 7.82. This difference could be to the place of the sample taken and the time because the Batayneh et al. (2014) collected the samples in 2014 and our samples were taken in 2018. Moreover, our samples were taken close to the cost and this could be another reason.

The microbiological test exhibited that bacteria were present in all samples (Table 4). The bacteria count were 1000 CFU/mL and total coliform were 100 CFU/mL. The E. coli were found to be 2 CFU/mL in all samples. Moreover, fungi were found in the range of 3000 CFU/mL. Several researchers found that seawater contains bacteria and fungi and coliform and other microorganisms (Samarasekera and Abeygunawardena, 2017; Park et al., 2003; Roslan et al., 2016; Chernikova et al., 2018; Yoon and Ryu, 2019). In Aqaba Gulf, bacteria and other microorganisms were isolated from different areas other than Saudi Arabian side (Grossart and Simon, 2002; El-Shenawy 2005; Suggett et al., 2009; Hussien et al., 2019).

This study is the first study to report that E. coli and other bacteria and fungi and coliform were isolated from the Aqaba Gulf on the Saudi Arabian side. The occurrence of E. coli might be due to the contamination of sewage coming to the sea. Moreover, sewage could change the pH and this will stimulate growth of E. coli. Therefore, it can be concluded that there was microbial pollution in the seawater on the Aqaba Gulf of the Red Sea at the Saudi Arabia side.

The author is thankful to the Dean, College of Haql, for providing necessary facilities.

Koch, F.C., McMeekin, T.L., (1924). A new direct nesslerization micro-kjeldahl method and a modification of the nessler-folin reagent for ammonia. Journal of the American Chemical Society., 46, 2066–2069.