The study involved 58 the Greco-Roman style (17-22 years) and four weight categories, with qualification not below the 1st sport degree. Registration of the heart was performed using electrocardiography and echocardiography in the precompetitive, competitive and postderegulation period. The athletes that used in precompetitive period, methodology, rational weight loss, have been identified in the competitive period of the change of heart, which is the options rules the “sports heart” (sinus arrhythmia, sinus bradycardia, atrioventricular blockage of I-th degree, and left ventricular hypertrophy) or of small anomalies of the heart (mitral valve prolapse with regurgitation of I degree), which requires medical monitoring but are not contraindications to sports activities. In post deregulation period primatologic hesky changes in the hearts of these athletes have been identified. The athletes, used in the precompetitive period of extreme methods of weight loss, in the competitive period revealed sinus tachycardia, arrhythmia, and arrhythmia, progressive post deregulation in the period, up to the maladjustment of the heart. Using methods of extreme weight loss in precompetitive period, the Greco-Roman style primatologichesky leads to changes of heart and should be reconsidered, in favor of rational techniques, based on manifested morpho-functional changes in the heart.

Karpov V. Y, Medvedev I. N, Dorontsev A. V, Svetlichkina A. A, Boldov A. S. The State of Cardiac Activity in Greco-Roman Wrestlers on the Background of Different Options For Weight Loss. Biosc.Biotech.Res.Comm. 2020;13(4).

Regular dosed physical activity provides the development of a number of regular changes in the human body (Stepanova et al., 2018).  Under the condition of gradual and feasible increase in load, they are positive and provide for the strengthening of the cardiovascular and respiratory systems, as well as optimize microcirculation processes (Zavalishina, 2018a; Vorobyeva et al., 2018). All this contributes to the improvement of adaptation processes in the body of athletes and athletes.  This is especially true in various martial arts (Magda, Afifi, 2017).The constantly increasing functional component in the classical struggle makes great demands on the cardiorespiratory system, the musculoskeletal system and the psychological state of athletes.  However, the reserves for further increase in training loads are almost exhausted (Afonina, 2013; Chichkova, Svetlichkina, 2017). A promising way to increase the level of fitness can be to improve the means of training used, create more rational ratios of the volume and intensity of the load, and use more advanced forms of recovery (Andrade et al., 2014; Svetlichkina, Kozlyatnikov, 2016). Insufficient recovery of the wrestler’s body leads to a decrease in its functional capabilities, contributes to the appearance of pathological phenomena in it, and causes the development of progressive chronic diseases (Karpov et al., 2019a).

The characteristic dynamism of competitive activity against the background of high emotional stress makes special demands on the cardiovascular system of athletes, and also requires the maximum mobilization of all functional reserves of other systems of their body (Karpov et al., 2019b).  In many cases, competitive activity is carried out against the background of an extreme decrease in the body weight of athletes, which greatly increases the risk of developing pathology of the cardiovascular system (Boldov et al., 2018).  In this regard, studies of the influence of physical activity of the competitive period on the state of cardiac activity in Greco-Roman style wrestlers, often resorting to an emergency way to reduce body weight, are relevant (Chichkova and Svetlichkina, 2017).The purpose of the study was to determine changes in the morphological and functional characteristics of the heart under the influence of physical activity in qualified Greco-Roman style wrestlers resorting to weight loss.

All subjects subjectively felt healthy, any complaints on the state of health was absent, auscultatory picture of the lungs in all cases were without pathology, pathological accents and a heart murmur over the heart area was tapped in 5 of the surveyed wrestlers (1 – a candidate master of sports, 4 masters of sports). The analysis of indicators of the electrocardiogram in athletes using methods for rational reduction of body weight during the precompetitive period revealed that at 55.8±5.2% of cases were detected sinus arrhythmia, at 37.2±7.1% of sinus bradycardia, which was regarded as a normal variant and served as an indicator of fitness athletes. At 16.2±2.5% of the wrestlers were was a syndrome of early repolarization of the ventricles as a result of changes in the autonomic nervous system with predominance of the influence of the vagus nerve, which was confirmed by the tests with physical load, in which the symptoms disappeared. In 23.2±3.1% of the surveyed wrestlers were registered atrioventricular block I degree (the interval PQ-0,21s), which is also considered a manifestation of “sports heart” and a good fitness of the cardiovascular system, but required in-depth surveys and dynamic control. In 69.7±2.5% of the surveyed wrestlers was hypertrophy of the left ventricle, which also require dynamic monitoring and control through echocardioscopy.

Auscultation of the 5 athletes (1 – a candidate master of sports, 4 masters of sports) auditioned noise mitral regurgitation that was confirmed by ultrasound examination of the heart, where were visualized mitral valve prolapse I degree with mitral regurgitation of I degree. These changes are attributed to small anomalies of heart development that are not contraindications to sports, but requiring control and dynamic examination at least 1 time a year for early detection of progression and transition these changes in the pathological condition. Athletes belonging to the weight category 55-60 kg and 60-63 kg, who resorted to extreme weight loss in preparation for the competition, recorded a number of characteristic changes in the electrocardiogram (Figure 1).  In 33.3±3.7% of athletes using extreme weight loss techniques, sinus tachycardia (χ2 = 8.5; p˂0.005; r – 0.577) was recorded, in 20.1±4.1% sinus arrhythmia (χ2  = 4.1; p˂0.005; r – 0.632).  In 13.3±3.3% of cases, a single supraventricular extrasystole was recorded (χ2 = 2.4; p˂0.05; r – 0.421), which increases after a functional test with physical activity (recording an electrocardiogram after 30 squats).

Figure 1: The frequency of occurrence of functional disorders and electrocardiograms of fighters in the pre-competition period. 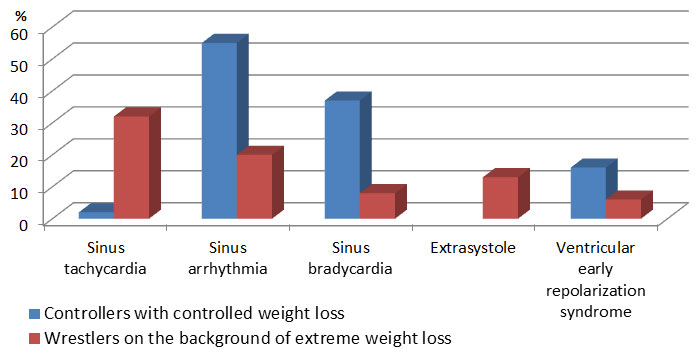 Figure 2: The frequency of occurrence of functional disorders and the electrocardiogram of wrestlers against a background of controlled weight loss in the competitive and post-competitive periods.

An analysis of the frequency of recorded pre-pathological changes in the heart based on the electrocardiogram data of athletes resorting to an urgent decrease in body weight suggests that the training load in the competitive period should be regulated taking into account morphofunctional changes in the heart of athletes, taking into account its initial state.

Figure 3: The frequency of occurrence of functional disorders and electrocardiograms of fighters against the background of extreme weight loss in the competitive and post-competitive periods. 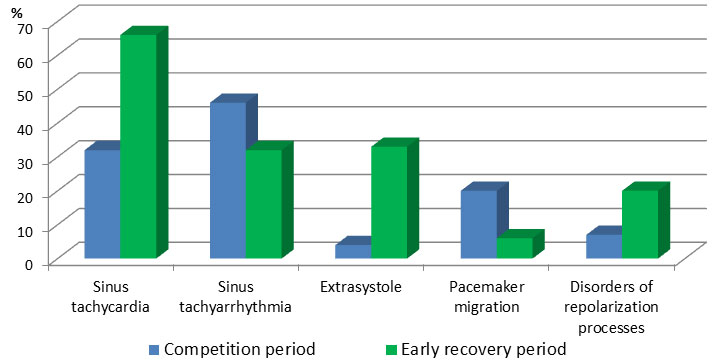 Hypertrophy of the left ventricle, revealed in the overwhelming number of examined wrestlers, requires ongoing ultrasound examination for the earliest detection of hypertrophic cardiomyopathy in them (Karpov et al., 2018; Zavalishina S.Yu. (2018b). Timely differentiation of pathological changes in the heart will allow timely removal of athletes from training with the appointment of rehabilitation measures, as well as make the necessary adjustments to their educational process, significantly reducing the risk of heart disease in these wrestlers (Zavalishina, 2018c; Zavalishina, 2018d).

An analysis of the frequency of recorded pre-pathological changes in the heart based on the electrocardiogram data of athletes resorting to an urgent decrease in body weight suggests that the training load in the competitive period should be regulated taking into account morphofunctional changes in the heart of athletes, taking into account its initial state.The results obtained suggest that it is necessary for the coaching staff to exclude cases of extreme weight loss of an athlete, especially in light and medium weight categories.  This will avoid the stress reactions of their body, especially in their cardiovascular system, which are always manifested in a change in the electrocardiogram indices (Zavalishina, 2018e; Zavalishina, 2018f).The result of restoring the reserve functions of the cardiovascular system in the post-competition period allows us to create a prognostic model for planning a competitive weight category, adequate physical activity in the annual cycle of training athletes without disrupting their adaptation processes and developing pathology (Zavalishina, 2018g; Zavalishina, 2018h).

Sinus arrhythmia, sinus bradyarrhythmia, early ventricular repolarization syndrome, I degree atrioventricular block, left ventricular hypertrophy, registered on the electrocardiogram, can be considered as a variant of a “sports heart”, not being a pathology of the cardiovascular system.  Changes in the electrocardiogram in the post-competitive period in the form of disturbances in the processes of myocardial repolarization, sinus arrhythmia and sinus tachycardia are manifestations of stress cardiomyopathy and a criterion for inadequate physical activity.  This requires the removal of athletes from training sessions and metabolic therapy in order to restore the functional reserves of their cardiovascular system.  Athletes who resorted to extreme weight loss during preparation for the competition recorded sinus tachycardia and sinus tachyarrhythmia, as well as cardiac arrhythmias in the form of supraventricular extrasystole.  These changes also require temporary suspension of athletes from stress and the appointment of rehabilitation measures.

Afonina, I.P.  (2013) Research on the impact of training effects on the body of wrestlers.  Bulletin of Tula State University.  Physical Culture and Sport, 3 : 80-88.

Magda S   and  H Afifi (2017) The Role of Quercetin on some Cardio-Vascular Parameters in Rats with Insulin Resistance Syndrome. Research Journal of Pharmaceutical, Biological and Chemical Sciences, 8(5) : 460-469.

Svetlichkina, A.A. and Kozlyatnikov, O.A.  (2016) Planning the intensity of physical activity on the basis of studies of electrocardiography in highly qualified athletes and students of Astrakhan State Medical University.  Scientific notes of the University named after P.F.  Lesgaft. 3(133) : 214-217.

Svetlichkina, A.A., Dorontsev, A.V. and Obukhova, E.V.  (2016) Violation of the processes of cardiac myocardial repolarization in students of the Astrakhan State Medical University engaged in sports sections. ” III international scientific and practical conference “Trends in the development of psychology, pedagogy and education”, 46-48.

Zavalishina, S.Yu. (2018a)Functional Activity Of Primary Hemostasis In Calves During The First Year Of Life. Research Journal of Pharmaceutical, Biological and Chemical Sciences, 9(6) : 1575-1581.

Zavalishina S.Yu. (2018b) Functional Properties Of Anticoagulation And Fibrinolysis In Calves Of Plant Nutrition. Research Journal of Pharmaceutical, Biological and Chemical Sciences, 9(5) : 1082-1087.