The Impact of Various Planting Timelines on the Makings of Harvested Wheat Grains
(Triticum aestivum) of Cultivars in Lorestan Province of Iran.

A research was taken place to examine the impact of planting timelines on growth and the makings of harvested grains of various wheat cultivars in Iran. The examination was organized in Randomized Complete Block Design (RCBD) with a split-plot arrangement comprising of three replicas in December 2011 in Boroujerd, Iran. Five planting timelines (i.e. October 31, November 15 and 30, December 15 and 30) were observed in main plots, while five wheat cultivars (Pishgam, Parsi, Bahar, Sivand, and Pishtaz) were cultivated in subplots. The findings of this study indicate that the impact of planting timeline was highly pronounced within all of the factors with the exception of HI. The impact of cultivars was especially observed within all factors with the exception of the weight of 1000 grain. The highest number of grains per spikelet was observed with regard to Pishtaz cultivar.

Admanesh. M. The Impact of Various Planting Timelines on the Makings of Harvested Wheat Grains (Triticum aestivum ) of Cultivars in Lorestan Province of Iran. Biosc.Biotech.Res.Comm. 2021;14(2).

Admanesh. M. The Impact of Various Planting Timelines on the Makings of Harvested Wheat Grains (Triticum aestivum) of Cultivars in Lorestan Province of Iran. Biosc.Biotech.Res.Comm. 2021;14(2). Available from: <a href=”https://bit.ly/3fJcbhH“>https://bit.ly/3fJcbhH</a>

Wheat (Triticum aestivum L.) is a significant edible grain which is normally in winters. The value of wheat as an edible grain can be realized while considering that it consists of 42% of gross sown area and 32% of the gross sown rice (Oryza sativa L.) area in the rice-wheat cropping pattern in South Asia ( Karasakal et al., 2020b, Jia et al., 2020, Aletor, 2021). When it comes to wheat crops, uniform stand establishment and early seeding vigor are two of the most important underlying factors of crop performance (Alayi et al., 2020). The parameters which might deter the uniform stand establishment consist of poor seed quality (Arjaghi et al., 2021), inadequate seedbed preparation (Khayatnezhad and Nasehi, 2021), poor irrigation methods (Harris, 1996), outdated cropping methods (Esmaeilzadeh et al., 2020), delayed planting, and sub-optimal temperature at the time of cropping, (Farhadi et al., 2020, Hewitt, 2021).

Delayed planting negatively impacts the growth, yield, and quality of wheat, because timely planting cultivates a greater quantity of grains than delayed planting because of the much longer period of time that the crops have in order to grow. Temperatures rates that vary from the standard temperature lead to changes in crop performance and yield. In delayed sown wheat, lower levels of temperature which exist at the time of germination considerably impact the sprouting of seeds and seedling emergence. Germination is a substantial step in the growth of the seeds and temperature rates below 12 °C cause deficient and asymmetrical seedling emergence  Gholamin and Khayatnezhad, 2021, Si et al., 2020). As a result, the seedling emergence and final development percentage are determinant parameters in establishing the crop performance in different temperature rates in wheat cultivation.

During delayed planting season, the soil temperature is anticipated to be below 10°C, which negatively impacts the sprouting of the seed and stand establishment. Normally wheat along with most the cold season crops is planted ahead of time in order to have the highest amount of time for growth and full development before the likely heat stress. Nonetheless, planting of winter wheat in the middle of the season is normally more desirable for any environment, while delayed planted wheat endures more distress during the winter, which results in the development of fewer tillers and ripening in lower grain weight which in turn affects the number of grains produced by each plant ( Gholamin and Khayatnezhad, 2020a, Sun et al., 2021).

The genotypic response of wheat to planting timelines is different for each parameter involved in crop development because of their varying genetic capacities. A downtrend in cultivation is observed in the cultivars which indicate that they need more time to grow than the time they are cultivated within the usual planting conditions. Higher temperature can lead to the minimization of the heading stage (Khayatnezhad and Gholamin, 2020b, Huma et al., 2021). Correspondingly, cultivars developed much faster after delayed planting, which demonstrates that higher rates of temperature shall pressure crops into faster development. Upon providing ideal condition by the wheat cultivar, the grain filling period was reported to be much longer in contrast with delayed planting conditions under high-temperature stress which results in faster development of the crops. As a result, the current research was carried out in order to analyze the impact of varying planting timelines on the makings of the harvested grain in wheat cultivars.

As an attempt to examine the impact of planting timelines on the makings of the harvested grain in common wheat (Triticum aestivum L.) cultivars, a trial was carried out under a specific thermal state at an agricultural farm in Lorestan province (Boroujerd station ) of Iran. The soil texture was designated as clay loam with a pH of 7.9 and EC = 0.40 d s m_1. The area of Boroujerd enjoys a constant semi-arid climate and it rains up to 369 mm there every year. Approximately 50% of it relates to the rains in the time of wheat and barley growth. The trial scheme was a split-plot comprised of three replicas. Twelve rows were created in each plot; with a length of 1 m and having 0.2 m space within them.

In the trials taking place in main plots consisted of five planting timelines including October 31 (A1), November 15 (A2),  November 30  (A3),   December 15  (A4), and  December 30 (A5). The experiments taking place in subplots that consisted of five cultivars included Pishtaz (B1), Bahar (B2), Pishgam (B3), Parsi (B4), and Sivand (B5). Upon full development, two of the external rows of each plot, 25 cm away from all the edges of the plots, were left as borders, and the crops planted in the 1 m2 central space of the two middle rows were gathered. Every single one of the representative grains was heated in the oven at 80 .C degrees and the harvested wheat rate was estimated, and following that the makings of the harvested grain of wheat cultivars were examined. The SAS Proc GLM procedure was chosen as the preferred data analysis framework for this study.

Table1. The Estimation of Population Variance (Mean Squares) for the Makings of the Harvested Wheat Cultivars within Various Planting Timelines

Figure 1: Simple Mean Comparisons for the Multitude of Grains per Spikelet in Wheat Cultivars

Figure 4: The Interaction Effect of Planting Timelines and Cultivars on the Harvested Grains of Wheat

Figure 5: The Interaction Effect of Planting Timelines and Cultivars on Biomass Production of Wheat

The Ratio of Grains to Total Shoot Dry Matter : Results indicated that the impact of cultivars on HI was highly pronounced (Table 1). The comparison of the mean values of the HI for cultivars demonstrated that Pishgam and Bahar cultivars exhibited the most (22%) and the Sivand cultivar exhibited the least amount of  HI (18%) (Figure6). 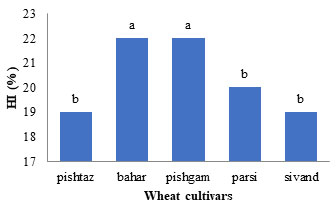 The period of time from planting to the time when the crops are fully grown was more outstretched within the delayed planted crop, as opposed to the timely planted crops, probably because of the comparably lower temperature rates in the period of time when the crops are fully grown when it comes to the crops that were planted much later. Green et al. (1985) asserted that crops planted within various timelines move forward within each growth stage under varying ecological conditions (Green et al., 1985).

Therefore, the delayed planted crops within this research moved forward within lower temperature rates and were affiliated with delayed blossoming. Ishag and Mohamed (1995) stated that different developmental phases of wheat are impacted by genetic and ecological parameters. The planting timeline exhibited a significant impact on the time that it takes for the grain to become fully grown. Delayed planted crops (early and mid-August) were gravely impacted by extremely cold weather strikes within the second and third weeks of November in both seasons and at the two locations (Ishag and Mohamed, 1995).

The findings of this study indicate that cultivars must be chosen in concurrence with the seasonal break, which might change from October to December. Under delayed planting, early sprouting and seedling development are highly significant for more effective stand establishment of the wheat crop, which is caused by the capacity to survive within lower temperature rates in the period of germination. Benjamin (1990) and Stewart et al. (1990) stated that lower temperature rates within the period of germination or sprouting and within the earlier stages of seedling growth exhibits harmful impacts on the crop establishment and productivity (Benjamin, 1990, Stewart et al., 1990, Gholamin and Khayatnezhad, 2020b). Tillering stage initiates after the finalization of the sprouting stage and approaches its fully developed state at the end of the vegetative phase which is the period of growth between germination and flowering.

The highest number of productive tillers results in the most amounts of grains produced. Nonetheless, when it comes to delayed planted crops, Bahar and Pishgam cultivars resulted in more productive tillers because of their finer germination stage and stand establishment in contrast with other cultivars which had ineffective stand establishment. Poor emergence and ineffective stand establishment cause less productive tillers (Karasakal et al., 2020a, Gholamin and Khayatnezhad, 2020c, Li et al., 2021). The method of tillering is impacted by the planting timelines because of the variations in temperature rates and the fact that the effect of tillers in the production of grains is mostly observed within the timely planting of crops which declines with delayed sowing.

The timely planting brought about more desirable growth of the grains because of the more time that the crop had to develop. The early sown wheat had more time for the dry matter accumulation to bring about the higher amounts of grains produced (Khayatnezhad and Gholamin, 2020a,). The findings of this study indicate that timely planting in November provides the best results when it comes to the production of the grains of wheat cultivars. Nonetheless, in order to get the very best results in the amount of grains produced, the planting timeline can be expanded to the last week of November. Parsi cultivar produced the highest number of harvested grains for planting timelines but Pishgam cultivar exhibited higher grain production rates when planted on November 15th and Bahar cultivar exhibited higher grain production rates when planted on December 15th. Therefore, in order to achieve the highest amount of the grains produced these cultivars should be planted within this specific timeline.

Benjamin, L. 1990. Variation In Time Of Seedling Emergence Within Populations: A Feature That Determines Individual Growth And Development. Advances In Agronomy. Elsevier.

Harris, D. 1996. The Effects Of Manure, Genotype, Seed Priming, Depth And Date Of Sowing On The Emergence And Early Growth Of Sorghum bicolor (L.) Moench In Semi-Arid Botswana. Soil And Tillage Research, 40, 73-88.

Khayatnezhad, M. & Nasehi, F. 2021. Industrial Pesticides And A Methods Assessment For The Reduction Of Associated Risks: A Review. Advancements In Life Sciences, 8, 202-210.

Radmanesh, M. 2021. Evaluation Of The Efficient Management Of Greenhouses For Healthy Items In The Province Of Alborz. Water And Environmental Sustainability, 1, 20-23.