In the study, the authors proceeded from the need to solve the problem of improving the technological processes in the food industry to improve the quality and working conditions. For the most complete use and regulation of microorganisms, it is necessary to know their needs, living conditions, and metabolism well. The objective of this work has been to determine the activity and formation of enzymes of the amylolytic complex by mould fungi in alcohol production. The studies were carried out in 2018-2020 based on the Premium LLC (Russia) and the Kabardino-Balkarian State Agrarian University (Russia) The objects of research were the moldy fungi Aspergillus oryzae, Aspergillus niger, Aspergillus awamori, and their varieties.

The study included several successive stages, namely: deep cultivation of molds, the establishment of enzymes of the amylolytic complex during their assimilation of various sources, the study of enzymes of microbial origin, and saccharification of starchy raw materials with fungal enzymes. It has been found that the formation of the amylolytic complex enzymes by mould fungi occurs when they assimilate various sources of mineral and organic nitrogen, as well as simple sugars, dextrins, and starch. As the temperature increases, the reactivity of the enzymes first grows and then, after passing a certain level, begins to decrease rapidly. It has been found that the duration of saccharification doesn’t affect the final results of the fermentation. Optimal conditions for the saccharification of mash ensure the greatest amount of starch hydrolysis products in the saccharifier and maintain maximum enzyme activity.

Khokonova M. B, Kashukoev M. V, Tsagoeva O. K. The Impact of the Activity of a Mould Fungus Culture on the Depth of Hydrolysis of Raw Material Carbohydrates in Alcohol Production. Biosc.Biotech.Res.Comm. 2021;14(3).

Khokonova M. B, Kashukoev M. V, Tsagoeva O. K. The Impact of the Activity of a Mould Fungus Culture on the Depth of Hydrolysis of Raw Material Carbohydrates in Alcohol Production. Biosc.Biotech.Res.Comm. 2021;14(3). Available from: <a href=”https://bit.ly/38RHd3U“>https://bit.ly/38RHd3U</a>

The alcohol industry, which processes grain raw materials using biotechnology methods for alcohol and fodder products, is one of the large-scale consumers of enzyme preparations of microbial origin. About 60% of the total volume of enzyme preparations entering the Russian market is used in the production of alcohol from grain. Due to the strong competition in the Russian alcohol market, obtaining high-quality ethyl alcohol is an important task for the industry.

For the most complete use and regulation of microorganisms, it is necessary to know well their needs, conditions of vital activity, and metabolism. Enzymes of mould fungi and bacteria get a wide application in alcohol production plants processing starchy raw materials in near future (Ashkhotov 2009; Vinarov, Kukharenko & Nikolaykina 2019). By the nature of the technological process, alcohol production is biochemical, as it is based on the action of malt enzymes that catalyze the hydrolysis of starch to form simple sugars, which are converted into ethanol by yeasts.

Previously, yeast was believed to be the fermenting enzyme (Mukailov & Khokonova, 2015). The saccharification of starch by extracts from germinated grains can be regarded as the beginning of the conscious use of enzymes (Kachmazov, 2012; Vinarovet al., 2019; Domnicheva, 2020).

The objective of this work was to determine the activity and formation of amylolytic complex enzymes by moulds in alcohol production. The novelty of the research lies in the fact that for the first time in the Kabardino-Balkarian Republic, the criteria for the cultivation of mold fungi enzymes were investigated and substantiated. Their influence on the hydrolysis of carbohydrates in alcohol production was determined.

Our research was carried out in 2018-2020 under the conditions of LLC Premium and at the Department of Production and Processing Technology of Kabardino-Balkarian State Agrarian University named after V. M. Kokov. The objects of research were microbial enzymes, mould fungi, distillery mash, and a stillage. The research methodology consisted of the following stages: deep cultivation of mould fungi, the establishment of amylolytic enzymes in their assimilation of various sources, the study of enzymes of microbial origin, saccharification of starchy raw materials by fungal enzymes.

The high amylolytic activity was observed in the cultivation of mould fungus on a medium with starch, maltose, dextrins, sucrose, and glucose, and the enzyme activity on glucose is no lower than on maltose, dextrins, or starch. Starch and its hydrolysis products are considered to be the best carbon sources in the surface and deep cultivation of the fungus (Iarovenko, 1996).

In deep cultivation of the fungus Asp. oryzae 153 capable of producing highly active amylase, it was found that the maximum amount of the enzyme was produced by the fungus when the medium contained 2% starch and 0.3% nitrogen in the form of ammonium sulphate (Table 1).

The data show that the amount of amylase formed on media with a sufficiently high starch content ― 2, 4, or 6% ― depends more on the nitrogen concentration in the medium than on the starch concentration. However, to maximize the formation of maltose and dextrinase, the starch concentration should be increased to 4 or even 6%. In this case, the formation of amylolytic complex enzymes ― amylase, maltase, dextrinase by mould fungi occurs during their assimilation of various sources of mineral and organic nitrogen, as well as simple sugars, dextrins, and starch (Ashapkin, 2005).

It is practically proved that the accumulation of amylolytic enzymes by the fungus Aspergillus niger is stimulated by adding magnesium oxide to the stillage. According to Russian researchers, the activity of dextrinase from magnesium increases on average by 50% compared to the activity obtained by neutralization of the stillage with calcium carbon dioxide (Table 2).

Table 2. Enzyme activity in the neutralisation of the stillage

To determine the optimum concentration of magnesium for fungal growth, it is recommended to assume the following ratio of magnesium to phosphorus: 36 phosphorus ions are required for each magnesium ion. Sulphur is a component of glutathione, which activates proteolytic enzymes that are important for the reproduction of microorganisms. At the same time, sulphur is found in important amino acids, such as methionine, and also stimulates the reversed amylase. As the temperature increases, the reactivity of the enzymes first increases and then, after passing a certain level, begins to decrease rapidly. The temperature optimum of the amylolytic enzymes is shown in Table 3.

Table 3. Optimal conditions for the vital activity of enzymes

The table shows that maltose and dextrinase are relatively more stable than the enzyme amylase, which is active under less strict experimental conditions. During saccharification of starchy raw material by fungal enzymes, starch hydrolysis does not end in the saccharifier but takes place mainly during fermentation. Therefore, the completeness of starch saccharification in the saccharifier for further digestion and alcohol yield is not of fundamental importance. Table 4 shows the activity of enzymes in cultures of mould fungi of the genus Aspergillus in the surface cultivation method.

Table 4. Enzyme activity in cultures of mould fungi of the genus Aspergillus in the surface cultivation method

The optimal temperature for saccharification of starchy mash by mushroom enzymes ensures that amylase and dextrinase activity is maintained for a long time (Serba et al., 2018). An additional check showed that raising the saccharification temperature to 58 and even 62°C did not impair any of the fermentation indices, but in terms of the sterility of the mash, these temperatures were unequal. Low temperatures of 50 to 55° C are conducive to the development of infections and have little effect on the process of gelling of insoluble starch of raw materials; higher temperatures of 58° C may cause the inactivation of enzymes.

Therefore a saccharification temperature of 57-58°C and a fermentation time of about 62 hours is accepted. A culture with such enzyme activity should be used which can hydrolyse 70-80% of the starch in the main mash. Some authors consider that amylase should be obtained to ensure that at least 20% of soluble starch is converted into hydrolysis products (Kadieva et al., 2003; Kachmazov, 2012; Belokurova, 2015; Domnicheva, 2020).

Depending on the activity, the consumption of the fungal culture can vary within certain limits. The rate and depth of hydrolysis of raw material carbohydrates are determined by the activity of the deep fungal culture. The degree of starch hydrolysis increases because it becomes more accessible for enzyme action due to the dissolution of protein and hemicellulose shells (Serba et al., 2018). The optimum external physicochemical conditions ensuring the maximum action of the enzyme complex should also be established: pH values, medium composition, temperature, and the duration of the process (Faradzheva & Fedorov 2002; Khokonova & Tsagoeva, 2019a).

The composition of the medium plays an important role in protecting many enzymes from temperature-induced inactivation. For example, protein coagulation has been identified as the cause of inactivation when malt extracts are heated. If sugars or peptone are present in the medium, they prevent coagulation and, thus, protect the amylase from inactivation. Consequently, the starch saccharification process of digested raw materials containing sugars, dextrins, proteins, and polypeptides can also be carried out at elevated temperatures, which are less dangerous under these conditions for amylase inactivation than in aqueous solutions.

Divalent metal ions (Mg2+, Ca2+, Ва2+, Mn2+, Ni2+) stabilise the amylase molecule and prevent its cleavage by proteolytic enzymes. However, even within one hour and at 55°C, the degree of starch saccharification does not exceed 51% and can vary according to the concentration of the added enzymes. Table 5 shows the characteristics of a mash saccharified with Aspergillus niger S-4 deep culture for 5 minutes at 55°C.

As the consumption of fungus culture increases in relation to the volume of the boiled mass, the concentration of dry matter decreases, which, in turn, also reduces the amount of reducing substances. Using 15%, the amount of maltose increases to 6.60% which is 1.58% higher than using 5% of the fungus culture. The highest percentage of saccharification is 61% when using 15% of the fungus culture. Further hydrolysis process occurs during fermentation. Consequently, the duration of saccharification has no effect on the final fermentation results (Khokonova & Tsagoeva, 2019b; Domnicheva, 2020).

Optimal conditions for the saccharification of mash are not so much necessary to ensure the greatest amount of starch hydrolysis products in the saccharifier but rather to maintain maximum enzyme activity (Mukailov & Khokonova, 2015). After the raw material has been boiled and cooled, a small amount of deep culture is added to liquefy it (Khokonova & Tsagoeva, 2019a; Khokonova & Tsagoeva, 2019b).

The remaining, largest part of the culture is transferred to a second-stage tube-type saccharifier, where the mass stays for 3-5 minutes at 65°C; the consumption of the deep culture is 15% of the volume of the mash. A correlation and regression analysis was carried out based on the results of our research (Figure 1).

Figure 1: A correlation and regression analysis, which revealed a strong direct correlation
between the percentage of fungus culture and the time of saccharification. 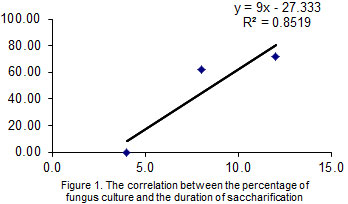 Thus, the research shows that the formation of amylolytic enzymes by mould fungi occurs during the assimilation of various sources of mineral and organic nitrogen as well as simple sugars, dextrins, and starch. As the temperature increases, the reactivity of the enzymes at first increases and then, after passing a certain level, begins to decrease rapidly. The duration of saccharification was found to have no effect on the final fermentation results. Optimal conditions for the saccharification of mash ensure the greatest amount of starch hydrolysis products in the saccharifier and maintain maximum enzyme activity. Three catalysts ― amylase, maltose, and dextrinase ― are needed for the effectiveness and feasibility of microbial enzymes.

Kadieva AT et al (2003). The impact of alcoholic fermentation conditions on the physiological and biochemical characteristics of the new alcoholic yeasts Saccharomyces cerevisiae 985 T and 985 O. Journal of Agricultural Raw Materials Storage and Processing, No 11 Pages 72–73.