The Effect of Saline, Drought, and Presowing Salt Stress on Nitrate Reductase Activity in Varieties of Eleusine coracana (Gaertn)

This study investigated the specific changes in nitrate reductase (NR) activity through a range of experiments with different salt treatments. Even under desirable normal conditions, higher plants reply on nitrate as the main source of nitrogen for obtaining optimal growth. Although plants can use various forms of nitrogen, its reduced form, ammonia, is preferable for plant growth as it is directly incorporable into organic compounds. This reduction is made possible via a series of catalysis reactions in which two enzymes, including nitrogenase and nitrite reductase, play the main roles in the conversion of nitrate to ammonia. The observations indicated that low-applied NaCl concentrations triggered higher enzyme activity in both Dapoli 3 and HR374 varieties; a low concentration could be described as about 8mM in both the varieties and, specifically, about 40% in HR374.

Despite the observed indirect relation between NaCl concentrations in varieties and enzyme activity levels, an increase in NaCl concentration also had a negative (inhibitory) impact on enzyme activity, as it respectively declined by 50% and 40% in Dapoli 3 HR374 after applying 150 mM of NaCl by irrigation. The study presoaked the seeds in different NaCl concentrations before germination and applied a stage of irrigation with three different concentrations of NaCl (8, 3, and 80 mM). The observations indicated that enzyme activity (EA) slightly improved in the extract collected from the leaves. Also, the study did not detect a significant association between a short-time drought and EA; however, as the drought duration increased to eight days, Line2542 and Line958 respectively represented a 45% and 36% EA decline.

The catalysis reaction leading to the reduction of N03‑ to NH4 + includes two stages in which the two enzymes mentioned above are involved. Two electrons allow for reducing NO3‑ to N02‑ in the first stage by NR:N03‑ + 2H + + 2e ‑ ‑‑‑‑‑‑ > N02‑ + H2O. Having positive effects on plant growth, NR is also regarded as the leading enzyme of the pathway, involved in the incorporation of nitrate to amino acids (Campbell 1985, Gholamin and Khayatnezhad 2012). Many research studies report a significant positive correlation between NR activity and plant growth (Zieserl, Rivenbark et al. 1963). With prosthetic groups containing flavin adenine dinucleotide (FAD), haem, and molybdenum, nitrate reductase is considered as an intricate protein, with a large structure and a heavy molecular weight, which consists of two subunit proteins each near 115 kD (Gholamin and Khayatnezhad 2020).

Evans and Nason (Evans and Nason 1953), for the first time, discovered NR cotyledons of some soybean varieties, and ever since, other research studies have detected this enzyme in all parts of the plant (Gholamin and Khayatnezhad 2020). Research concerning nitrate reductase faces two challenging issues regarding the NR localiza­tion and regulation, as based on the results of many studies, a few researchers speculate it is detectable in the cytoplasmic space (Suzuki, Gadal et al. 1981).Vaughn et al. (Vaughn, Duke et al. 1984) examined the fixed tissue selection of soybean cotyledons in a series of immunofluorescence studies and confirmed the cytoplasmic localization of NR. Yet, NR is present in chloroplasts based on the results of relevant research confirm (Losada and Guerrero 1979, Gholamin and Khayatnezhad 2020, Gholamin and Khayatnezhad 2020).

K­amachi et al. 1987 conducted an immunogold localization study recently, examining spinach chloroplasts and they concluded that NR is specific to chloroplasts (Kamachi, Amemiya et al. 1987).  On the other hand, some research has provided evidence suggesting plastids in roots are the points where the NR is localized (Layzell 1990). Proposedly, NR has a two-site ping pong model the reaction mechanism (Campbell 1985, Khayatnezhad 2012, Khayatnezhad and Gholamin 2012). The first acceptor, FAD, receives the two electrons donated by the reduced pyridine nucleotide, which pass through cyt b557 site to Mo cofactor site, where they are donated to N03, which gets reduced to NO2.

Research studies commonly describe NADH as the agent responsible for reducing the activity of NR (Oaks, Wallace et al. 1972). The results of two research studies and suggest that the function of NR is also associable with  NADPH FMNH2, and FADH2, and reduced benzyl and methyl viologens (Prakash, Singh et al. 1984).Alterations in the physiological properties and the environmental conditions can effectively adjust NR activity and impact the production and degradation in higher plants (Guerrero, Vega et al. 1981, Khayatnezhad and Gholamin 2012), some of which include changes in light conditions, sources of nitrogen and energy, vital mineral substances, water-induced stress, temperature fluctuations, PGRs, plant age and metabol­ic inhibitors‌ (Naik, Abrol et al. 1982). Supply of substrat­e, coenzymes, and energy are the main determinants of NR activity.Nitrate reductase is highly responsive to substrate (Somers, Kuo et al. 1983) with potential quick turnovers (Oaks, Wallace et al. 1972). The balance between enzyme production and turnover is generally an important maintaining factor of NR levels (Lee and Stewart 1979). May research studies have confirmed the necessity of N03‑ as a substrate for NR induction (Rajasekhar, Gowri et al. 1988, Khayatnezhad and Gholamin 2020).

Also, alterations in light conditions are extremely influential on NR induction (Kapoor, Prakash et al. 1987). The observations in relevant research identify two other agents for regulating NR activity, including NH4 and amino acids (Guerrero, Vega et al. 1981), as the end product of N03‑ reduction (NH4 +) is a presumed suppressor of NR activity. Conversely, some scholars associate NH4+ with the stimulation of NR activity (Smith and Thompson 1971, Khayatnezhad and Gholamin 2020).

Since NR is a molybdoflavo protein, the presence of Mo, as an essential NR activity stimulating factor is considered universal. As Mo is found in the structure of the NR molecule, plants with Mo deficiency represent lower NR activity compared to those provided with external sources of Mo, in which Nr activity quickly increases (Afridi and Hewitt 1964). It has been confirmed that saline soil conditions impair the nitrogen assimilation process (Demboski 1999). Based on the results of relevant research indicate that nitrate reduction is believed to be highly affected by external stress conditions. The research by Smirnoff et al., (Smirnoff, Winslow et al. 1985) proposed two main influential factors on NR activity: nitrate availability or protein synthesis, stating any factor affecting those can also influence NR activity. Various factors are proved influential on NR activity, including soil wet content, salinity, and bacterial nitrification.

The findings of a vast range of research represent that medium saline content is a suppressor of NR activity (Lal and Bhardwaj 1987). Rakova et al. (Rakova, Klyshev et al. 1978) studied the effects of salinity on NR activity and structure, finding that salinity conditions cause structural disintegration of this enzyme’s molecules; two main factors are involved for this disintegration, including the dissociation of FAD and Mo from the apoprotein respectively in leaves and roots. Furthermore, many other relevant studies confirm the positive association between salinity and increased NR activity. For instance, the study by Boucaud (BOUCAUD 1972) identified salinity as an indirect factor for increasing NR activity, claiming the effect originates from the modification of CO2 assimilation and protein synthesis by salt.

Another relevant study attributed increased NR activity under salinity conditions to higher osmotic potential enhanced by salinity, describing NR activity as specific to different saline conditions (treatments). They found that while a lower NaHCO3 concentration had positive effects, a higher concentration limited the NR activity. In a similar study, Sharma and Purohit (1986) discovered that NaCl and NaF had a limiting effect on NR activity Joshi (Joshi 1987), though, observed the stimulating effect of NaCl and the inhibitory effect of Na2SO4 .

Extraction and Assay buffer: 0.1M Tris ‑ HC1 (pH 7.5’), KN03 0.1M, Sulphanilamide 1% in 1 N HCl, 1N (1‑naphthyl ethylenediamine dihydrochloride 0.1%. In nitrate-to-nitrite reduction reaction, NR plays the accelerating role (catalyst). The study used sulphanilamide as an amino compound coupling with NEDD in the presence of NO2 to synthesize an azo dye. The initial NO2 concentration corresponds with the amount of azo dye. The study arranged two groups of control and treatment cultivars (Dapoli 3 and HR374) and harvested and chopped the leaves and used their known weight as an enzyme source.

The study utilized the method proposed by Klepper et al. (1971) to assay the in vivo NR activity. The amount of assay mixture in the experiment was firstly 2.0 ml containing 0.1M Tris- HCL buffer pH 7.5, 0.005 M KNO3, and 50 mg of fresh plant material.  The experiment put the assay mixture in an incubator for 20 minutes at 370C and terminated the reaction using  1.0 ml of sulphanilamide as an additive after adding  NEDD and measured the wavelength of the resulting pink color at 525nm. Finally, the study used the nitrite standard curve to estimate nitrite amounts. The unit of expressing EA was: mg NO2–/hour/gm fresh tissue.

Figure 1 illustrates the data concerning NR activity levels in E. coracana leaves under a treatment regiment with varying NaCl concentrations of sodium chloride. As clearly presented in Fig.1, a low (i.e. 8mM ) NaCl concentration results in a higher EA in both varieties of in the study. On the other hand, though, this observation also indicated that increasing NaCl concentration will harm EZ, as it was observed EA respectively declined by 50% and 40% in Dapoli 3  and HR374 under a regiment of 150mM of NaCl. When the study presoaked the seeds in different NaCl concentrations before germination and applied a stage of irrigation with three different concentrations of NaCl (8, 3, and 80 mM). The observations indicated that enzyme activity (EA) slightly improved in the extract taken from the leaves. As depicted in Fig.2, however, an increase in the NaCl concentration to 150mM led to a 25% decrease in EA, representing the relevantly positive effect of a presowing stage on the increasing plants’ tolerance to salinity. 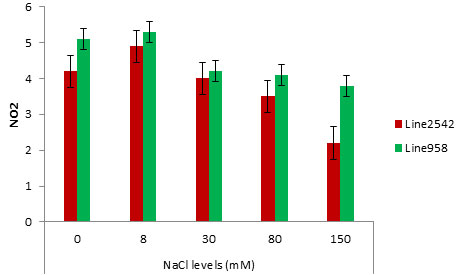 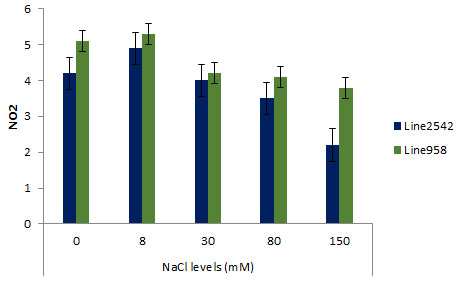 Observations indicate the although a direct increasing role is not attributable to NaCl in terms of NR induction and activity, its ability to modify CO2 assimilation and protein synthesis can indirectly result in the mentioned effects. In two similar studies, over a decade, on Salsola foetida, Austwenfeld (Austenfeld 1974) found a positive association between low NaCl concentration levels and NR activity. Moreover, they found that alterations in NR activity might have caused fluctuations in the protein content since NR is known for limiting the rate in the whole nitrate assimilation. Joshi, in a study concerning Cajanus cajan, found that a similar association between a gradual increase in NR activity and the increasing NaCl concentrations in the soil, attributing the increased activity to the increased osmotic potential as a result of higher NaCl concentrations (Joshi 1984). Several studies, though, claim that salinity can limit‌ NR activity (Sankhla and Huber 1975), suggesting the disintegration of NR under saline conditions in roots of pea and rice (Rakova, Klyshev et al. 1978).

Afridi, M. and E. Hewitt (1964). “The inducible formation and stability of nitrate reductase in higher plants: I. Effects of nitrate and molybdenum on enzyme activity in cauliflower (Brassica oleracea var. Botrytis). Journal of Experimental Botany 15(2): 251-271.

Gholamin, R. and M. Khayatnezhad (2012). Effect of different levels of manganese fertilizer and drought stress on yield and agronomic use efficiency of fertilizer in durum wheat in Ardabil. Journal of Food, Agriculture & Environment 10(2 part 3): 1326-1328.

Losada, M. and M. Guerrero (1979). The photosynthetic reduction of nitrate and its regulation.” Photosynthesis in relation to model systems. Elsevier, Amsterdam: 365-408.

Sankhla, N. and W. Huber (1975). Effect of salt and abscisic acid on in vivo activity of nitrate reductase in seedlings of Phaseolus aconitifolius.Zeitschrift für Pflanzenphysiologie 76(5): 467-470.