Indiscriminate anthropogenic application and release of herbicides can induce oxidative stress to the detriment of living organisms. In this study, the deleterious effects of three commonly used herbicides (Paraeforce®, Cotrazine® and Force Uron®) in the Niger Delta area on a non-target environmental receptor – Archachatina marginata was assessed using biochemical indicators – malondialdehyde, superoxide dismutase and catalase. The results of sublethal exposure indicated that the values of the oxidative product, MDA in the tissues of the organisms in the treatment groups were higher (1.19 ± 0.10 to 3.80 ± 0.91 mmol/MDA) than the control (0.28 ± 0.03 mmol/MDA).

In the last few decades, there has been an increase in the application of a myriad of herbicides to control weed and pests ravaging farmland and stored food crops. Similarly, due to high resistance of these herbicides in completely eliminating destructive weeds and pests, more enhanced products and formulations emerges yearly without recourse to testing the deleterious consequence these herbicides would impact on target, non-target species and humans.

In the same vein, a lot of these chemicals (herbicides), have not been evaluated for their ecological impact on environmental receptors since some herbicides could accumulate to toxic levels in soils and become harmful to soil dwelling organisms, plants, wildlife and subsequently man, who consumes products from such soils (Micuti et al., 2018).Exposure of living species to pesticides (herbicides) and industrial chemicals have been identified amongst the major factor that can induce oxidative stress, which is an imbalance between oxidant and anti-oxidant mechanisms (responses) (Gurvinder, 2019).

Wang et al., (2018) noted the toxic manifestation induced by atrazine, mesotrione, and joint activity of herbicides on pigment, oxidative and antioxidant enzyme activities in their study. The effects of herbicides, which may be associated with enhanced generation of reactive oxygen species (ROS), may lead to oxidative stress in vulnerable living receptors.

It has been reported that ROS production impairs tissue and cell functioning by inducing peroxidation, protein damage and DNA breakage (Valko et al., 2007).Malondialdehyde (MDA) values can be used to evaluate lipid peroxidation, which is referred to as the oxidative degradation of lipids. It is the process in which free radicals capture electrons from the lipids in cell membranes, thus resulting in cell damage (Gueraud, et al., 2010).

The main system of defense against damage from free radicals is the enzymatic system that opposes oxidation, which includes superoxide dismutase (SOD), catalase (CAT) and glutathione peroxidase (GPX). They are major anti-oxidant enzymes that prevent oxidative stress damage to tissues.Some commonly used herbicides in the Niger Delta area of Nigeria include the three evaluated in this study – paraquat, atrazine and diuron.  Paraquat dichloride (1,1-dimethyl-4,4- bipyridinium dichloride) is a non-selective broadleaf weed control herbicide known to be highly toxic to human and animals. High paraquat concentrations has been found to induce ROS (Suntres, 2002; Xiaolong et al., 2014; Wang, et al., 2018).

Bakry et al., (2016), demonstrated the oxidative-stress inducing potential of paraquat in land snails.Atrazine (2-chloro-4-ethylamino-6-isoprioylamino-1,3,5-triazine) is a selective herbicide linked to generation of ROS which could lead to induction of oxidative stress (Gao et al., 2016). Diuron or DCMU (3-(3,4-dichlorophenyl)-1,1-dimethlurea) is a selective and a potent inhibitor of photosynthesis. Diuron herbicide has been linked to the cause of cytotoxicity and generation of ROS in treated HepG2 cells and zebrafish embryos (Kao et al., 2019).

The aim of this study was to assess the deleterious effects of three herbicides (paraquat, atrazine and diuron) exposed to a non-target environmental receptor (Archachatina marginata) at sublethal levels (2% and 5% and 10% of the EC50) of the herbicides using lipid peroxidation (LPO), superoxide dismutase (SOD) and catalase (CAT) as biomarkers. This is with the view of estimating the likely influence of oxidative stress induced by the test herbicides on the exposed species.

Test Chemicals:Three herbicides commonly used by farmers and non-farmers namely Paraeforce®, Cotrazine® and Force Uron® were used in this assessment. Sublethal concentrations of 2%, 5% and 10% of the EC50 was used for this study to estimate the likely influence of oxidative stress that may be induced from exposure to the herbicides, that is around and below the safe limit of 10% (Table 1).

Table 1. EC50 and concentrations used for this assessment

Test specie : The test specie for the study was the giant African snail (Archachatina marginata). Snails are considered excellent indicators of ecosystem health and since they are particularly sensitive to changes in their environment, they can act as early warning sentinels of habitat deterioration. They are easy to sample and identify, abundant all year round and easy to breed under controlled conditions. In addition, they are consumed by man and other higher organisms since they are used as a rich source of protein and health treatments (Ogeleka et al., 2016).

Bioassay for biochemical indices in Archachatina marginata: Archachatina marginata of seven-day old with length 1.23 ± 0.5 cm and weight 0.81 ± 0.05 g, were collected from Songhai farms (cultured) in Delta State at latitude 5o34’N and  longitude 5o50’E and used for the evaluation. The species were exposed to the test chemicals for 28 days using the International Organization for Standardization (ISO), #15952 protocol (ISO, 2006), after which they were removed, rinsed and used for the biochemical bioassay.  Homogenates of the snails were prepared by homogenizing 0.5 g of the snails tissues in ice-cold phosphate buffer at pH 7.2. The homogenates were centrifuged at 4000 rpm for 10 minutes and the supernatant were used for the biochemical analysis.

Lipid peroxidation assay: Peroxidation was estimated using the method of Buge and Aust, (1978) based on malondialdehyde assay. Malondiadehyde, a product of lipid peroxidation, when heated with 2-thiobarbituric under acid conditions forms a pink coloured product which has a maximum absorbance at 532nm. MDA content was expressed as mmol/MDA wet tissue;

Antioxidant enzymes (superoxide dismutase and catalase): The activity of superoxide dismutase in Archachatina marginata was estimated spectrophotometrically using the method of Nishikimi et al., (1972). The assay of SOD is an indirect method based on the inhibitory effect of SOD in the initial rate of epinephrine (adrenaline) auto-oxidation. SOD was expressed in unit/mg protein tissue. The activity of catalase was determined in the tissue homogenates by the method of Ramos-Vasconcelos and Hermes-Lima (2003). It was based on the measurement of the rate of decomposition of hydrogen peroxide (H2O2) after the addition of the material containing the enzyme. Catalase was expressed in unit/mg protein tissue.

The results for enzymological analyses are given in Table 2 and Figures 1-3. The results from Table 2 indicated that there was significant differences between the activities of the anti-defensive systems of the organisms exposed to the test herbicides with respect to the control. The results indicate that alteration in MDA (as lipid peroxidation), increased with increase in concentrations while SOD and CAT activities decreased with increase in concentration of the test herbicides. In addition, the weight of the organisms decreased significantly at levels of P < 0.05 after the 28 day exposure in all test concentrations with respect to the control groups. 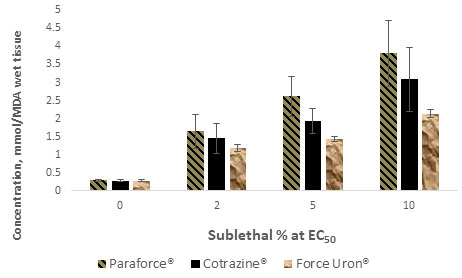 Superoxide dismutase activities: Superoxide dismutase catalyzes superoxide radicals (O2-) to molecular oxygen (O2) and hydrogen peroxide (H2O2) to defend cells from reactive oxygen. Superoxide dismutase activity in the organisms was observed to decrease as the concentrations of the test herbicides increased (Figure 2). The effects SOD induced by the herbicide was more at the lowest concentration of 2% and decreased down to 5% and 10%, which implied that as you move away from the safe limit of 10%, the more reduced the levels of SOD and the likely inability of the organisms to overcome oxidative stress. 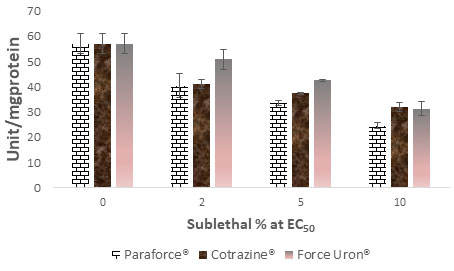 Catalase activities: Catalase is an enzyme that decomposes hydrogen peroxide (H2O2) to water (H2O) and molecular oxygen (O2). Catalase activity showed decrease as the concentrations of the test herbicides increase which is an indication of high level of toxicity of the test herbicides when compared to the control groups. Similarly, the effect CAT induced by the test herbicides was more at the lowest concentration of 2% and decreased up to 5% and finally 10%, which implied that as you move up away from the safe limit, the more reduced the levels of CAT and more likely the increase in oxidative stress (Figure 3). 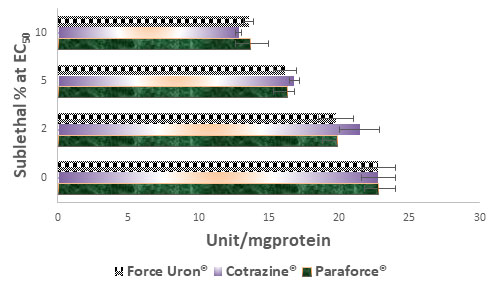 Oxidative stress induced by hazardous herbicides and chemicals could negatively impact environmental species. Over the years, anthropogenic agricultural activities have altered the environment to the detriment of these vulnerable organisms. In this assessment, there was an increase in the levels of MDA in the exposure organisms for all test chemicals with respect to the control which was an indication of lipid peroxidation. The increase in the values of MDA is often associated with high levels of free radicals generated by the presence of toxicants in the environment such as herbicides. An evidence that oxidative stress has been induced in the snails by the herbicides was corroborated in the reports of Belhaouchet et al., 2012 and Siwela et al., 2010.

The decline in activity of the SODs in this assessment can be linked to its role in oxidizing the free radicals generated by the presence of the toxicants (herbicides) (Barondeau et al., 2003). It has been reported that toxicants can decrease the activity of SOD and there was significant inhibition in SOD activity when compared to the control.

This was in line with the study reported by Bakry, et al., (2013). Decrease in CAT activities could be due to decrease in the rate of reaction as a result of the excess production of peroxide (H2O2).The values of the anti-defensive systems with respect to the control for the different concentrations of the test herbicides could be as a result of the defensive mechanisms trying to get rid of the free radical species generated by the presence of the herbicides in the exposed test organisms, (Kono and Fridovich, 1982, Al-Fanharawi et al., 2018).

The present study showed reduction in SOD and CAT activities with significant increase in lipid peroxidation activities represented as MDA in the tissue of snails treated with the test herbicides. Hence as you move up away from the safe limit of 10%, the more reduced the levels of the anti-oxidant defense mechanisms (SOD and CAT) and thus a more enhanced probability of oxidative stress, which some species may likely not be able to overcome. However, since no mortality was reported at the different concentrations of the EC50 evaluated in this study, but rather sluggish movement and immobilization / lack of burrowing.

it means that SOD and CAT was still available so they can continue to scavenge free radicals before permanent damage occurs (Al-Fanharawi et al., 2018). Similarly, if the concentrations of the test herbicides increase beyond the safe limit of 10% of the EC50, oxidative stress damage / lipid peroxidation generation may overwhelm the anti-oxidant (SOD and CAT) defense mechanisms to the detriment of the exposed vulnerable species in the environment. This may possibly result in permanent alteration in some of their activities including immobilization and subsequently death of the exposed non-target biological receptors.

Exposure of non-target environmental receptor – Archachatina marginata to herbicides (Paraeforce®, Cotrazine® and Force Uron®) at sublethal concentrations had deleterious effects measured by MDA, SOD and CAT. The eco-toxicity potential of these herbicides is indicated. The present study considered specifically MDA, SOD and CAT in a bid to ascertain changes induced by the test herbicides on the exposed species, subsequently further studies by the authors will consider hematological indices amongst others.

conflict of Interest: The authors declare that they have no competing interest.

We acknowledge members of the thematic group of the Geo-Environmental and Climate Change Adaptation Research Centre and the research support team in the Delta State University, Abraka for their contributions, cooperation and statistical analysis.

Author’s Contributions: This work was carried out in collaboration between all authors. Doris Fovwe Ogeleka and Felix Ebhodaghe Okieimen designed the study, performed the statistical analysis, wrote the protocol, and wrote the first draft of the manuscript. Beatrice Oghenetega Peretiemo-Clarke managed the analysis of the study and literature searches. All authors read and approved the final manuscript.

Belhaouchet N, Djebar MR, Meksem L, Grara N, Zeriri I and Berrebbah H (2012). Evaluation of the biomarkers of the oxidative stress induced by a biopesticide. The Spinosad on an alternate model: Helix aspersa. Journal of Applied Sciences Research. Vol 8 Pages 4199-4206.