The present study was made to find out the health status of a wetland Muragacha Beel, District North 24 Parganas, West Bengal, India. The study focused on the seasonal fluctuation of physicochemical parameters of water and diversity of fish fauna during pre-monsoon, monsoon, and post-monsoon from March 2019 to February 2020. Water samples and fish specimens were collected from three different sites of the beel every month to evaluate the correlation between physicochemical properties of water and the indices of fish diversity. A significant seasonal fluctuation in fish diversity (2.762-2.796) in relation to physicochemical parameters (temperature 20.2-32.8ºC, turbidity 23.1-30.1 cm, pH 7-8.5, carbon dioxide0-15.6 mg/l, dissolved oxygen 4.5-5.9 mg/l, biochemical oxygen demand 2.6–7 mg/l, alkalinity 148-194 mg/l, hardness 106-168 mg/l, phosphate 0.43-1.25 mg/l and nitrate 0.17-0.45 mg/l of water) was recorded during the study period. In respect of fish faunal diversity, a total of 25 species belonging to 6 orders and 16 families were identified.

Maximum representatives belong to the order Cypriniformes having 6 species with 44.6% Relative Abundance, followed by Clupeiformes with 2 species with 18.6% Relative Abundance. The beel was heavily infested with aquatic vegetation creating complex environments for the growth of different fauna. The present study indicates that the beel is moderately productive and suitable for commercial aquaculture. The effect of seasonal variations on the assemblage of fish composition is found to be important and it should be considered into account when developing initiatives that will be taken in the future to support the productivity and biodiversity of the wetland.

Wetlands are highly diversified and productive ecosystems. Huge numbers of biodiversity are found within the lap of the wetland (Groombridge and Jenkins 1998; Ramachandra et al. 2006). The existence of aquatic life is completely dependant on the health status of wetlands. Constant surveillance is needed to conserve and protect this treasure of nature (Ramachandra et al. 2006; Ramesh et al. 2007). Freshwater wetlands in India are not only rich in fish biodiversity but also support a fashionable source of zooplankton, phytoplankton and macroinvertebrate species. The primary aim to maintain the health status of any wetland is to keep its physicochemical parameters within desirable limits (Khan 2002; Garg et al. 2010).

The diversity of the aquatic community varies greatly with seasonal fluctuation. The fluctuation of water quality parameters is considered a vital factor to analyze the species’ biodiversity (Mondal et al. 2010; Jagadeeshappa and Kumara 2014). The physicochemical parameters play an important role to study any aquatic environment (Jagadeeshappa and Kumara 2014). The alteration in the physicochemical status of water directly influences the composition of aquatic flora and fauna. There are more than 150 floodplain lakes in West Bengal, covering a 42,000-ha area, contributing to about 22 percent of the freshwater habitat of the entire state (Bhaumik et al. 2003; Singh et al. 2017).

Among them, the North 24 Parganas district possesses a huge amount (8861ha) of water resources. Subsequent deterioration of water quality could be a serious threat to the fish biodiversity and productivity of floodplain lakes in the state. The present study was administrated to measure the magnitude of the physicochemical parameters of water and its relation with the fish biodiversity indices of Muragacha Beel. The area is mainly rain-fed. The fisherman utilizes this wetland for fish capture. Sewage from the municipality, domestic disposal directly mixes up in this wetland. The reason behind the selection of this particular beel is to assess its health status and its suitability for fish culture (Mondal and Kaviraj, 2008; Mondal et al. 2010).

In India, multiple studies have been carried out to analyze the physicochemical parameters of aquatic bodies (Azmi et al. 2015). Ansari (2017) carried out the water quality analysis of Surajpur wetland, UP to check the relationship among various physicochemical parameters in both temporal and spatial scales. Multiple pieces of research are done to analyze the water samples on several wetlands in the state. But inadequate information is found regarding the physicochemical properties and fish assemblage of this particular wetland (Azmi et al. 2015; Ansari 2017). So, an investigation has been done to research the physicochemical status of water and diversity of fish fauna during pre-monsoon, monsoon and post-monsoon from March 2019 to February 2020.

The study was conducted on monthly basis from March 2019 to February 2020 for the analysis of physicochemical parameters and the relationship of those parameters with fish diversity. A total of three representative sampling sites (Site1, Site2 and Site3) were selected. The most changeable and sensitive water quality parameters such as Water Temperature, pH, Transparency (Turbidity), Dissolved Oxygen (DO) and Free CO2 were measured in-situ, while rest parameters (BOD, Total Hardness as CaCO3, Total Alkalinity as CaCO3, Nitrate, and Phosphate) were analyzed in the laboratory. The collection of water samples was done between 5 am to 8 am. Sample preservation and evaluation of different water quality index were performed according to standard procedures (APHA, 2005; APHA, 2012; Chattopadhyay, 1998). The outcomes of the physicochemical study of the water sample were matched with the World Health Organisation (2011) standard (Panigrahi and Subhasini, 2020).

The fishes were captured at three stations with local nets and their identification was confirmed by the method used by Armantrout et al. (1994). The diversity and evenness indices were calculated by the references of Shannon et al. (1950). Pearson linear correlation was carried out to see the connection between various physicochemical parameters. To evaluate the diversity indices, random fish samples were extracted from five nettings across each site were collected to produce a 1kg sample of small wild fish for every site per month. From these data Shannon-Weiner species diversity index , Evenness index(J), Index of Dominance (ID) and Relative Abundance (RA) were determined using the following equations (Shannon et al. 1950; Armantrout et al. 1994): 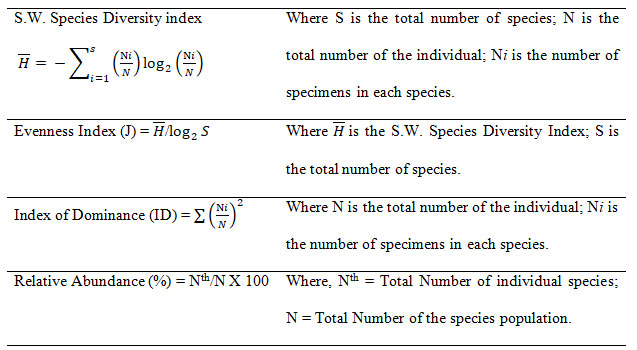 The limnological data of the study period was assembled for three seasons and assessment was done for seasonal variations, viz., Pre-monsoon (from March to June), Monsoon (from July to October), and Post-monsoon (from November to February). Mean, Standard Error of Mean and One-way analysis of variance (ANOVA) for various parameters for three seasons and multivariate statistical analysis PCA (Principal Component Analysis) were performed using XLSTAT 2020 and GraphPad Prism9. Tukey HSD tests were carried out to measure the significant difference at the 5% probability (α) level (Shannon et al. 1950; Armantrout et al. 1994).

The higher pH was recorded in post-monsoon due to the low level of water, higher nutrient content. The range of pH showed sub-alkaline in nature (7.0 to 8.5) that was within the permissible limit as prescribed by WHO (2011). In Muragacha beel, pH showed a positive correlation with DO, BOD, total hardness and total alkalinity while showed a negative correlation (Table–3, Fig. 2) with nitrate, water temperature and CO2. The results of the present investigation are comparable with Panigrahi and Debnath (2013).

A water body’s transparency usually suggests its effectiveness. Throughout the monsoon month, it was found to be a maximum that may be attributed to the entry of rainwater from the surrounding area. Throughout pre-monsoon and post-monsoon it was generally low which shows similarities to the earlier work of Kumar et al. (2019). In Muragacha beel, turbidity showed a positive correlation (Table–3, Fig. 2) with dissolved oxygen, nitrate and phosphate whereas it showed a negative correlation with CO2, BOD and total hardness (Panigrahi and Debnath 2013).

Table 3. Correlation matrix among the physicochemical parameters and Shannon-Wiener diversity Index of Muragacha beel wetland from March 2019 to February 2020. 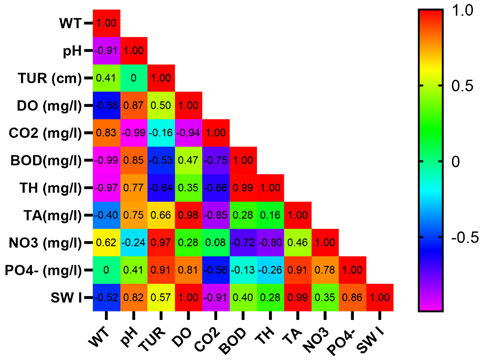 Dissolved oxygen attributes are inversely related to the temperature cycle, differing from post-monsoon upside to pre-monsoon lowest point. Chaurasia and Tiwari (2011), also reported similar observations in a freshwater beel of Bhagalpur in Bihar. In the present investigation, dissolved oxygen of the wetlands shows a negative correlation (Table-3, Fig.2) with temperature, CO2 and nitrate but showed a positive correlation with pH and phosphate (Chaurasia and Tiwari 2011).

Free CO2 was relatively high during the summer months, which can be due to the faster decomposition of organic matter and high temperature. Lacking free carbon dioxide in other seasons could be due to its utilization by phytoplankton and other aquatic plants via photosynthesis. The free carbon dioxide shows a significant positive correlation with temp and nitrate while negative with the rest of the parameters which similar to Hassan et al. (2011) and Shinde et al. (2011).

The amounts of nitrate in all three sites of this beel were found very low. During the monsoon period, however, the level of nitrate was found a bit high due to the surface runoff and some microbial activity. In monsoon, the activities of these microbes go down resulting in a higher value of nitrate (Kaur et al. 1996). In Muragacha beel, nitrate showed a positive correlation with phosphate, TA and water temp but a negative correlation with pH, DO and BOD. Phosphorus in water commonly exists as phosphate. The phosphate concentration in water above 0.5 mg l-1 indicates pollution (Jain et al. 1996).

Maximum phosphate was observed in Muragacha beel during the monsoon and minimum during the pre-monsoon. In Muragacha beel, phosphate showed a negative correlation (Table-3, Fig.2) with water BOD, Total hardness and CO2 while a positive correlation with pH, DO and nitrate was observed. The concentration of phosphate which was moderate throughout the year indicates that this beel is mesotrophic. A mesotrophic wetland system has intermediate levels of phosphorus and is suitable for the growth of aquatic plants and fishes (Gupta et al. 2016).

Figure 3: Quadrant distribution of different water physicochemical parameters of water of  Muragacha beel throughout the year via PCA. 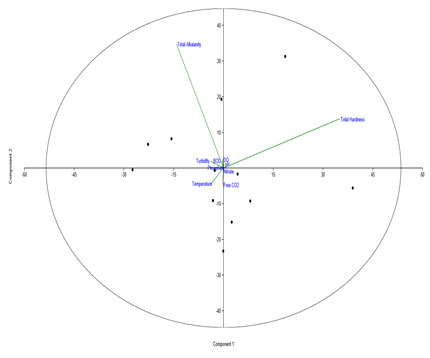 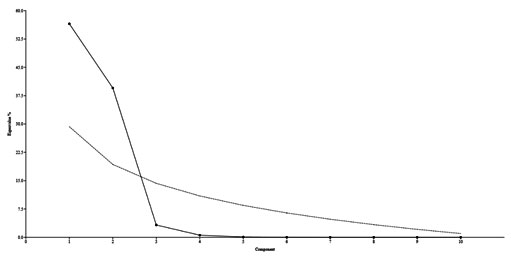 The results described above indicate that the physicochemical parameters studies were within acceptable limits and the water quality of this beel was good enough to support rich high species diversity and suitable for fish culture. This is also relevant to Bhatnagar and Devi (2013), where they found most of the physicochemical parameters were within the target range (Bhatnagar and Devi 2013).

The Shannon-Wiener diversity index shows a negative correlation with water temperature and CO2 while positive relation with the other parameters like pH, DO, BOD, and phosphate. The dominance index increases with the harshness of the environment (Karr, 1971) while the evenness index decreases with the increase in stress in the environment (Chapin et al. 2000). Natural and anthropogenic activities directly impact the relative abundance of species until it becomes an endangered species (Roy et al. 2013). In this present study, the Shannon-Wiener diversity indices suggest that the water of Muragacha beel is healthy, which was compared with Jewel et al. (2018).

This is the first report of Muragacha beel which showed that this beel has immense potential to sustain good biodiversity and ideal for aquaculture. Most of the physicochemical parameters were within the target range of water quality guidelines of the Central Pollution Control Board, India. Results of phosphate and nitrate concentration in the present study and result of fish diversity indicate that the beel is Mesotrophic. However, there is significant seasonal fluctuation in the water quality along with fish diversity. Finally, it is concluded that the beel is productive and suitable for pisciculture.

Authors acknowledge the facilities of research provided by Prof. Soumendranath Chatterjee, Department of Zoology, University. The authors are thankful to fishermen associated with Muragacha beel wetland for their needful help.

Conflict of Interests: Authors have declared that there is no conflict of interest.