Laccases are biotechnologically relevant enzymes used in different industries including textile industry, food processing industry, pharmaceutical industry, wood processing industry and chemical industry. Recently they are used in biosensors for detection of phenolic compounds, in biofuel cells for the generation of eco-friendly energy and also as a medical diagnostics tool. Because of wide range of applications, laccases have received so much of attention of scientists and researchers in the last few decades. They are extracellular, metalloenzymes containing copper.

It has ability to catalyses the oxidation of polyphenolic compounds. Laccase activity was reported in different range of fungi including white-rot fungi basidiomycetes, deuteromycetes and ascomycetes where its main role is lignin-degrading. The searching of new microbial sources for laccase production is great demand. Present study was focused to search a new microbial strain that produces laccase from different soil samples. The strains isolated from soil enabled the laccase production and was qualitatively analyzed using 2,2-azino-bis (3-ethylbenzothiazoline-6-sulfonate) (ABTS). It is an indicator compound used for the rapid visual of laccase positives strain. Laccase isolates were identified with the change in color from dark green to purple on ABTS containing Potato dextrose agar (PDA) plates.

Because of their significant utilization in various biological processes, the enormous demand of laccases is increasing day by day in many industrial fields of bioremediation and xenobiotic degradation, dye degradation, biosensor, and food and bakery. Various improvements are undergoing to better the formation of lignocellulose-based products in nanotechnology application (Margot et al. 2013; Rao et al. 2019).

Laccases are widespread in nature and was first reported from Rhus vernicifera in Japanese lacquer tree. Laccase is obtained from wide variety of organisms including bacteria to higher organism such as fungi, plants and insects. Laccases expressed by such microorganisms includes majorly lignin peroxidase (LiP), manganese peroxidase (MnP) and laccases (Dwivedi et al. 2011; Xu et al. 2017).

The laccase producing fungi isolated from new microbial systems would be considered, extremely useful for achieving several biotechnological applications. These fungal laccases are very efficient in conversion of plastic, fuel, paint and wood components into nutrients. Currently researchers are mainly focusing on enhancing laccase production from several strains of Basidiomycetes predominantly wood-root-fungi by optimizing culture conditions suitable for production. Couple of studies have reported ascomycetes on their lignin degrading ability but very less reported on Alternaria alternate for laccase production.

The sample collecting site covered with various trees and shrubs, turnover of the organic substance in such soil expresses rapidly. The soil sample was collected in sterile plastic bags aseptically from a depth of 10–15 cm below the earth’s surface as shown in Fig. 1.

For the isolation of microbes (ascomycetes and fungi), the soil samples were first serially diluted and then were spread evenly over the surface of potato dextrose agar plates to isolate fungi (Kanaujia et al. 2014). Further, the plates were incubated at 35oC and monitored after 5th days. Fungal screening was carried out by using ABTS 2,2’-azinobis-(3 ethylbenzthiazoline-6-sulfonate) as indicator compound.

Positive laccase isolates were visualized as dark green to purple color on ABTS containing Potato dextrose agar (PDA) plates which indicates the presence of laccase being produced by the fungus, as previously reported (Pointing et al., 2000). Screening of laccase producing organisms was employed on PDA plates supplemented with 0.1% and 0.01% ABTS 2,2’-azinobis-(3 ethylbenzthiazoline-6-sulfonate) respectively and incubated at 30OC for 7 days. Culture plates indicate that the definite color changes were considered for laccase producing strain and employed further for consequent studies (Pointing et al., 2000).

After purification of amplified products by agarose gel electrophoresis, the amplified products were sent for sequencing to Xcelris Labs Limited Ahmedabad, India. The most homologous sequence was determined by comparison to Gene Bank database using BLAST software. Genetic distance and neighbor-joining algorithm was analyzed by using MEGA 6.0 software and the phylogenetic tree was constructed to study the evolutionary relation between species.

All the isolated and subculture fungal colonies were inoculated on PDA plates supplemented with specific substrate for laccase. Five days old culture was placed on PDA plates containing ABTS and incubated at 30°C for 7 days (Antecka et al. 2018).

PCR AMPLIFICATION AND IDENTIFICATION OF THE FUNGAL STRAIN: The amplified DNA quality was evaluated on 1.2% agarose gel, a single discrete high-molecular weight PCR amplicon band of 750 bp has been observed as shown in Fig. 3. 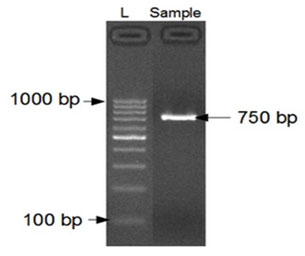 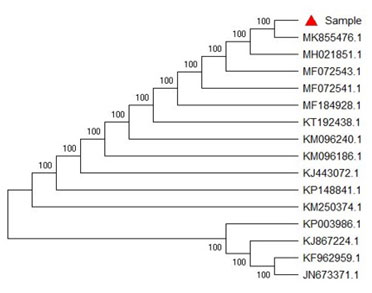 Branches corresponding to partitions reproduced in less than 50% bootstrap replicates were collapsed. The percentage of replicate trees in which the associated taxa clustered together in the bootstrap test (1000 replicates) were shown next to the branches. The evolutionary distances were computed using the Kimura 2-parameter method and were in the units of the number of base substitutions per site (Kimura 1980; Felsenstein 1985).

The extracellular laccase producing fungus was isolated from a new habitat and used for enzyme production. Based on the screening results using lignolytic substrates of ABTS and identified by dark green and purple color oxidation zone was developed around the colonies (positive ABTS-substrate oxidation) which were taken for the laccase production (Wang et al. 2018; Senthivelan et al. 2019). Depending upon the observations one predominant strain of fungus was selected for further study. The screening results showed the formation of color under the medium with ABTS (substrate) confirmed that the isolated fungus has ability to produce lignin-degrading enzyme (Das et al. 2016).

Conidiophore septum sometimes demonstrated as branched or simple straight or curved shaped medium brown and sleek barred, Conidia like branched chains, short conical or cylindrical beak and they had been obscured in many previous studies (Abeer et al. 2015; Sharma et al. 2016). Similar investigations were also reported in the ABTS containing plate showed the green and purple-color in the presence of laccase producing fungi defined the positive reaction for the laccase production (Vantamuri and Kaliwal 2015).

In the present study, a fungal stain Alternaria alternata was screened and investigated. The results showed that the fungal isolate Alternaria sp. MK855476.1 exhibited an ability to oxidize ABTS. Ahalo of dark green and purple was formed around the fungal colonies (positive for ABTS oxidation), indicating the presence of ligninolytic enzymes laccase. Due to their broad substrate rang and a large number industrial and biotechnological application of these multicopper enzymes has led to a terrible increase in the demand for this biocatalyst. Optimizing the condition for increasing laccase production and decolourization of dyes by Alternaria alternata will be further investigated in the future.