Screening and Isolation of Plant Growth-Promoting Bacteria from Forest and Coastal Regions of Saurashtra, Gujarat

Chemical fertilisers have been used intensively in recent years leading to the degradation in the quality of the soil. Diversity of microorganisms is important, as their unique features can be utilized for crop production and environment.  Microorganisms are usually inhabited in all parts of the plant from the roots to the shoot and internal regions of the plants. Rhizosphere microbial variety conveys an assortment of microorganisms which offer advantageous properties to the plant environments. In the present study, an attempt has been made for the screening of bacteria for plant growth-promoting activities such as nitrogen fixation, phosphate solubilization and indole acetic acid production. Soil samples were collected from thirty-four different places of districts Junagadh, Gir Somnath, Amreli, Diu, Dwarka and Jamnagar.

Twenty soil samples were from forest region and fourteen soil samples were from the coastal region of Saurashtra. The nitrogen-fixing capability of the isolates was evaluated using Ashby’s media containing bromothymol blue. Total 57 nitrogen-fixing bacteria based on their colony morphology were isolated, of which 49 bacterial isolates were able to solubilize phosphate and 27 were able to produce indole acetic acid. Of 57 bacterial isolates, 23 isolates showed positive results for nitrogen fixation, phosphate solubilization and indole acetic acid production. Nitrogen and phosphorus are one of the major essential macronutrients for plant growth and development. Indole acetic acid serves as one on the plant hormone for growth of plants. The present study indicates 23 bacterial isolates can have the potential for plant growth-promoting bacteria and as a greater number of isolates were from forest region which also indicates the fertility of the soil.

Farmers are currently using chemical fertilisers to intensively supplement the basic nutrients of the soil-based plant system. The advantage of accessibility and intensive use create environmental issues of chemical fertilizers today’s agriculture.  The use of chemical fertilizers does however have their advantages and drawbacks in agriculture. Hence, there’s an increasing demand for various ways to support the crop production and to maintain the nutrient within the soil environment for ecological equilibrium in an agroecosystem.

The engagement of microorganism as inoculants or for plant growth-promotion is promising and are widely accepted practices which are been employed in agriculture for the agricultural produce. Symbiotic / non-symbiotic soil bacterium that colonizes root rhizosphere of plant and promotes the expansion in terms of crop yields, (Gouda et al., 2018; Santos et al., 2019, Lebrazi et al., 2020).

Diversity of microorganisms is important, as their unique features can be utilized for crop production and environment (Costa et al., 2018). Variety of microorganism assists with developing the biological system comprises of an organism, soil, and plant. The working of this environment is significantly represented by microbial elements. Microorganisms are usually inhabited in all parts of the plant from the roots to the shoot and internal regions of the plants (Harman and Uphoff, 2019).

In all structures, most of these microorganisms help and raise the plant to live emphatically and offer significant great conditions to the plants. In all structures, the greater part of these organisms helps and elevate the plant to live soundly and offer useful focal points to the plants. Among all these plant growth-promoting bacteria undertake a significant job and are a focal situation in quality and the quantity of yield. Rhizosphere microbial variety conveys an assortment of microorganisms which offer advantageous properties to the plant environments (Thakur et al., 2020).

Plant growth-promoting effect of the PGPB is usually explained by the discharge of metabolites which directly promote the plant growth (Rilling et al., 2019). There are several ways to elucidate the activities of PGPB benefit to the host plant. PGPB have potential to supply plant growth regulators like cytokinins, indole acetic acid (IAA) and gibberellins, enhancing organic process, promote solubilization of inorganic and organic phosphate. The inoculation with PGPB strain like Azotobacter could help to scale back the utilization of nitrogen-based chemical fertilizer (Sharma et al., 2016; Roriz et al., 2020).

Plant growth‒promoting bacteria (PGPB) have been studied as a sustainable alternative to the use of chemical fertilizers to increase crop yields, and effective PGPB have been isolated from diverse plants and soil compartments. Naturally occurring bacteria, commonly found in the soil associated with the roots of plants, positively affect the growth of plants in a number of different ways (Rilling et al., 2019; Glick, 2020). This includes increases in plant yield, nutritional content, tolerance to various abiotic and biotic stresses, and the production of useful secondary metabolites. Due to its topographic state, the Saurashtra region, Gujarat  India has a wide variation.

The region has a range that ranges from both forest and coastal areas to wetlands. Saurashtra region has shallow, medium black, calcareous soils with a rainfall range of 400mm to 700mm and dry sub-humid climate. Groundnut, cotton, sesamum, sugarcane, rice, pulses, jowar and bajra are major crops produced in the Saurashtra region (Gondaliya et al., 2017; Ravi and Fulekar, 2018). In the present study, an effort has been made to screen for free-living plant growth-promoting bacteria from the forest and coastal region of Saurashtra.

The sampling area for the soil was dug to a depth of about 25-30 cm and then collected and transferred to sterile polyethene bags. The soil samples for further use were stored in a refrigerator at low temperatures. For the isolation and screening of nitrogen-fixing bacteria from soil, serial dilution technique and spread plate method using Jenson agar medium was used (Sahoo et al., 2014).

In case of soil samples from coastal regions Jenson agar medium with varying salt concentration of 0.5%, 2%, 4%, 6%, 8% and 10% respectively. Different components of Jenson agar medium were weighed, dissolved in an appropriate amount of water, pH was adjusted and autoclaved at 1210C (15 psi) for 15 minutes. Ten gram of soil sample was suspended in 90 ml of sterilized distilled water blank and kept on a rotary shaker for 30 minutes so that microorganism adhered to the soil particles get dispersed uniformly into the water.

Using serial dilution technique serial dilution were made up to 10-7. From dilution of 10-5 to 10-7, 100 μl was spread on Jenson agar medium plates in triplicates. The spreaded plates were incubated at 30±1ºC till the visible colonies appeared. Individual colonies of different bacterial isolates showing different morphological features were picked up, purified by streaking on solidified Jenson agar medium plates.

The isolated colony of each isolate, colony characters were described according to Microbiology: A Laboratory Manual (Cappuccino and Welsh, 2017). Individual isolated pure colonies were picked up and maintained on Jenson agar slants for further use. They were streaked on freshly prepared nutrient agar plates and incubated for 3 days at 30±1 ºC. Gram’s staining of isolates was done according to the procedure given by (Brown and Heidi, 2015). Cell shape was also recorded. Nitrogen-fixing capability of the isolates was evaluated using Ashby’s media containing bromothymol blue (Hingole and Pathak, 2016).

Plates containing medium were prepared and streaked with different isolates in triplicates. Plates were incubated at 30±1ºC. Isolates fixing nitrogen showed growth on the medium with a change in colour from green to blue. Uninoculated plates in triplicates served as control. Different bacterial isolates were screened for their phosphate solubilizing ability by growing them on Pikovskaya agar medium (Gupta and Pandey, 2019). Fifty microlitres of two days old culture suspension of selected isolates were spotted on the solidified agar medium plates incubated at 30±2ºC for 5-6 days. The plates were examined for the production of a clear zone around the bacterial growth. As a result of acid production, isolates which used tricalcium phosphate developed a clear zone around the colony (Gupta and Pandey, 2019).

The bacterial isolates were screened for their ability to produce IAA, in the absence and presence of tryptophan.  The bacterial isolates were inoculated in 5 ml Jensen’s liquid medium incubated at 30±2ºC. Cultures were centrifuged at 3000 rpm for 30 minutes. Two ml of Salkowski’s reagent and two drops of ortho-phosphoric acid was mixed with 2 ml of supernatant. The presence of the pink colour indicated the production of IAA. Further study was performed for ammonia production and other biochemical properties, such as capsule staining, indole analysis, oxidase test and catalase test, in isolates that have shown positive results for nitrogen fixation, phosphate solubilization and indole acetic acid production (James Cappuccino and Welsh, 2017; Gupta and Pandey, 2019).

Screening of nitrogen-fixing bacteria from soil: The accession number given to the isolates were GFS for the isolates obtained from the soil of forest region of Saurashtra and SCS for the coastal region of Saurashtra.  Different isolates were isolated based on colony characteristics like morphology, size, and shape. From all the soil samples, about 57 bacterial isolates have been isolated. Twenty-seven isolates were from the forest region and thirty were from the coastal region of Saurashtra.  It was observed that out of 57 isolates 34 were Gram-negative coccobacilli,6 were Gram-negative bacilli, 10 were Gram-positive bacilli, 6 were Gram-positive coccobacilli and one was Gram-positive cocci. They were grouped based on Gram reaction and shape of the bacterial cell (Table1). Upon capsule stain of 57 isolates, 30 were capsulated and 27 were non-capsulated.

Nitrogen fixation: Nitrogen is required for the synthesis of amino acids, chlorophyll, nucleic acids, and ATP which are required for the growth and survival of plants (Chakraborty and Tribedi, 2019). All the 57 isolates indicated by growth on Ashby’s medium and turned the greenish colour of the medium to blue (Table 2). The development of blue colour was due to the production of ammonia in the medium making it alkaline (Figure 1). It has been previously observed, that Azospirillum possess high nitrogenase activity allowing for the possibility of using this bacterium as a biofertilizer to improve soil fertility for improved and efficient farming (Richard et al., 2018). However, the confirmatory test of nitrogenase activity using acetylene reduction assay (ARA) needs to be performed to establish their nitrogen-fixing capability (El-Khaled et al., 2020).

Table 1. Gram’s Stain, Morphology, and presence of capsule of all bacterial Isolates.

Phosphate solubilization: Phosphorus is one of the major essential macronutrients for plant growth and development. However, the concentration of soluble P in the soil is very low (Zhu et al., 2011). The use of phosphate solubilizer bacteria as inoculants will increase P intake by plant and cultivation at the same time (Olanrewaju et al., 2017).  Of the 57 bacterial isolates, 49 isolates solubilized tri-calcium phosphate as indicated by the production of clearance zone around the bacterial colony on Pikovskaya’s agar medium plates (Table 2).

Solubilization of tri-calcium phosphate requires either acid production or chelate formation by the bacterium in the medium. Probably other isolates did not produce acid insufficient amount or chelate to solubilize tri-calcium phosphate in the medium (Figure 2). Several studies showed that PGP bacteria were responsible for solubilizing the insoluble P. It was also reported that excretion of organic acids was one of the most important factors in phosphate solubilization (Hemambika et al., 2013; Alori et al., 2017; Pérez-Rodriguez et al., 2020).

Figure 2: Solubilization of phosphate as seen around the bacterial isolate. 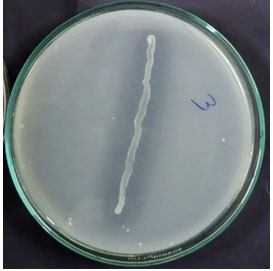 Production of Indole Acetic Acid: Out of 57 bacterial isolates 27 produced IAA from tryptophan (Table 2).  These broth cultures containing tryptophan showed red colouration on the addition of Salkowski reagent.  Indole acetic acid production is characteristic of the production of plant growth promoters.Bacterial IAA contributes to the growth of the lateral and adventitious root lead and triggers the bacterial proliferation of roots by exuding the root in order to increase their absorption of minerals and nutrients (Glick, 2010). In previous studies it has been indicated that IAA-producing rhizobacteria could be harnessed to improve plant growth ( Das et al., 2019; Lebrazi et al., 2020).

Biochemical tests: All the 57 isolates were able to produce ammonia, oxidase and catalase.

Conflict of Interest : The authors declare no conflict of interest among themselves.

Alori, E. T., Glick, B. R. and Babalola, O. O. (2017). Microbial Phosphorus Solubilization and Its Potential for Use in Sustainable Agriculture. 8.

Santos, M. S., Nogueira, M. A. and Hungria, M. (2019). Microbial inoculants: reviewing the past, discussing the present and previewing an outstanding future for the use of beneficial bacteria in agriculture. AMB Express, 9, 205.