The use of lignocellulosic material is the second-generation process of Bioethanol production and there is a sufficient supply of lignocellulosic materials in agricultural industries such as wheat bran, cotton ginning waste and sugarcane bagasse. The huge amount of waste generated from cotton ginning industry is a burning issue to dispose off, so in order to curb that issue, fermentative bioethanol production from cotton ginning waste using Aspergillus spp. is the best possible options to overcome it. It is also helpful in alleviating the global problem of greenhouse gases and decreasing the use of non-renewable energy with the generation of bio fuel using cotton ginning waste.

The key stages involved in Bioethanol production from lignocellulosic biomass consist of pretreatment of biomass, saccharification, fermentation, and Ethanol Production. In current research work, the combination of three different methods for pretreatment of cotton ginning wastes: acid, alkaline and acid-alkaline were evaluated for the conversion of cellulose and getting higher ethanol yield. After Pre-treatment, sugar i.e., cellulose was further exposed for enzymatic hydrolysis by the cellulase enzyme produced from Aspergillus Spp. using Solid State Fermentation (SSF). The saccharified substrate was then utilized as C source for the fermentation and production of Bioethanol.

The cotton mills and cotton ginning industries worldwide are facing the biggest problem for the waste disposal and in maintaining environmental regulation, as enormous amount of cotton gin waste is created every day. The cotton crop cultivation generates two major types of residues: cotton plant trash (CPT) and cotton gin trash (CGT). Out of these two forms, CGT is very significant due to its higher production and difficulties in its disposal (Agblevor et al. 2006; Sharma and Chen 2008; Pla´cido et al. 2013; Chaudhary and Padhiar 2020).

Biological conversion of these cellulosic wastes into energy, food and chemicals at economic rate is beneficial to mankind (Arthe 2008). With the growth in population there is increasing demand of fuel, so converting such non feed material into bioethanol is of prime importance. As per the earlier research, the production of bioethanol was carried out from sugarcane and starchy feed stocks such as molasses, corn and potato etc.

These substrates are measured as the first-generation process but these processes require pointedly increased amount of cultivable land and increase in food prices leads to its unavailability. This raises the concern since the first-generation process for bioethanol production could not meet the global energy need (Yang et al. 2007; Mitchell 2008; Chaudhary and Padhiar 2020).

Thus, in the coming years focus is shifted towards the production of bioethanol from the non-food plant sources which are considered as the second-generation process. In this process majorly lignocellulosic biomass is used, which consist of major share of agricultural and forest wastes which are the most plentiful renewable biological resources (Splomon et al. 1999; Lin et al. 2006).

The current study is concerned with the production of cellulase using low-cost agro-industrial residue (CGW) as a substrate using SSF. Aspergillus spp. is selected for saccharification because of its rapid growth rate, easy preservation and high metabolic activity in production of cellulase enzyme. Pretreatment of CGW using different methods were carried out and Saccharomyces cerevisiae (MTCC No.172) was used for (SHF) separate hydrolysis and fermentation process for bio ethanol production. The estimation of substrate was carried out using Dinitro salicyclic acid (DNSA) method and Ethanol Estimation is carried out using Iodometric Titration (Miller 1959; Breuil and Saddler 1985; Darwesh et al. 2020).

So far, there are very few such study is conducted to demonstrate the production of bioethanol from cotton ginning waste. Thus, this work significantly represents that saccharified substrate cotton ginning waste is the finest alternate way for the bioethanol making using separate hydrolysis and fermentation method to overcome the increased use of non-renewable energy source and global warming.

For collection of the sample, CGW (Cotton ginning waste) was collected from sites of cotton ginning mills from kadi district Mehsana, India. The cotton ginning waste was initially washed with normal tap water in order to remove the soil and other impurities and placed in oven for complete drying (Chaudhary and Padhiar 2020). For the acid pretreatment of cotton ginning waste, 700 ml of 3% sulphuric acid was prepared in 2000 ml Erlenmeyer flask. The flask was added with 54 gm of processed cotton waste and further autoclave carried out at 121˚C for 15 minutes. The flasks containing the pre-treated substrate were then neutralized by washing with tap water till the pH of pre-treated substrate and tap water equalizes. The acid pre-treated samples were then dried separately for further analysis (Chaudhary and Padhiar 2020).

The pre-treated substrate was then neutralized by washing with tap water till the pH of pre-treated substrate and tap water equalizes. The pre-treated samples were then dried separately for further analysis (Dimos et al. 2019; Chaudhary and Padhiar 2020). For the experimental design of solid-state fermentation (SSF) for enzyme production, preparation of Inoculum was carried out by inoculating previously preserved culture on fresh Rose Bengal agar slant and incubating at 30˚C for 3-7 days. The activated spores were harvested and suspended in sterile D/W (100 ml). 4.5 ml of spore suspension was then further inoculated into substrate flasks for enzyme production (Chaudhary and Padhiar 2016).

Extraction of enzyme from substrate flask is done by adding 5 ml of cold 0.05 M acetate buffer (pH 4.8). The homogenate was filtered using muslin cloth and then centrifuged at 5000 rpm at 4˚C for 15 minutes. The supernatant is used as a crude enzyme source and analyzed for carboxyl methyl cellulase (CMCase), filter paper activity (FPase) and β- glucosidase (Chaudhary and Padhiar 2016). For the saccharification of pre-treated substrates, about 5 gm of acid, alkaline and acid-alkaline pretreated cotton ginning waste taken into 100 ml Czapek Dox medium and 5 ml of the cellulase enzyme was inoculated which was extracted by SSF.

Flasks were incubated at 45˚C up to 10 days in shaking condition. Sugar content was analyzed using DNSA method after every 24 hours of interval till 10 days. An enzyme blank was prepared without adding any substrate (Venkatachalapathy et al. 2014). For the estimation of cellulase activity, cellulase activity was measured by increasing level of sugar using DNSA method. After 24 hrs., 5ml of broth was harvested from each cotton pretreated flasks. The broth was then filtered with Whatman filter paper no.1 and the filtrate were used for further sugar estimation (Chaudhary and Padhiar 2016).

For the isolation of yeast strain, the yeast strain of Saccharomyces cerevisiae (MTCC No.172) was used for this work. It was grown and maintained at 30˚C and 4˚C on Yeast Extract Potato agar plate and slants respectively (Guilherme et al. 2019). For ethanol Production by Saccharomyces cerevisiae using Separate Hydrolysis and Fermentation Method, fermentation was carried out in 100 ml volume with saccharified substrates (CGW). Enzymatic hydrolysate obtained after saccharification of acid, alkaline and acid-alkaline treated substrates (CGW) was decontaminated at 121˚C for 15 min. After disinfection, 9% inoculums of S. cerevisiae were added for Bioethanol production.

The process was carried out at 30˚C for 72 hrs., along with shaking condition at 100 rpm. After 24 hours of incubation, samples were retrieved to determine the concentration of ethanol produced through fermentation (Chandel et al. 2007). The substrate consumption was estimated using the Dinitro salicylic acid (DNSA) method  and estimation of bio ethanol was carried out after 48 hrs. using Iodometric Titration method (Miller 1959; Breuil and Saddler 1985; Chaudhary and Padhiar 2020).

For the estimation of Ethanol, ethanol concentration was determined by Iodometric titration method. In this method K2Cr2O7 reacts with concentrated H2SO4 to liberate nascent oxygen which in turn oxidizes ethanol to acetic acid. Remaining amount of potassium dichromate reacted with potassium iodide to liberate iodine which was measured by titrating with 20% sodium thiosulphate using 1% starch as an indicator. The titration results were further used to calculate the ethanol concentration after fermentation process (Chaudhary and Padhiar 2020).

Isolation of Aspergillus spp.: Isolation of fungus was carried out using RBA media. Morphological observation was done and Light green to dark green appearance of colony was observed after 3 to 4 days of incubation. Microscopic observation was done after mounting with lacto-phenol cotton blue dye using high power. Light violet-colored hyphae with dark violet color spores were observed after maturation (Chaudhary and Padhiar 2016; Sahu and Pramanik 2018). 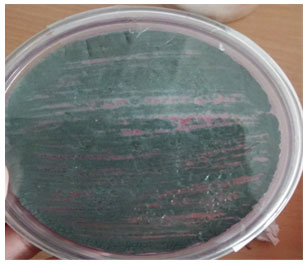 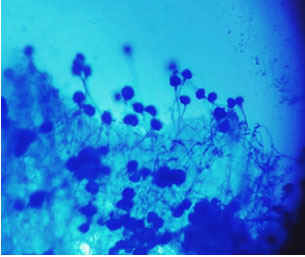 Cultural and morphological characteristics of yeast: The colony characteristics of the yeast culture were studied on Yeast extract potato dextrose agar plate which was shown in table:1. Microscopic observation of yeast under oil immersion lens was shown in fig:3. Yeast was further inoculated at 30˚C for 3 days to check ethanol production (Sahu and Pramanik 2018). 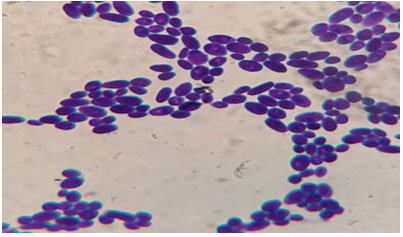 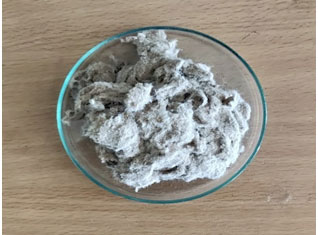 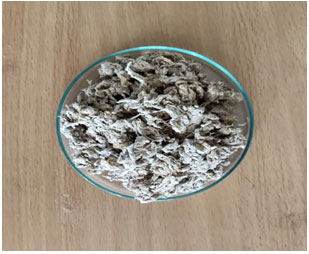 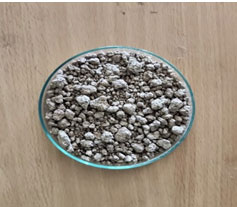 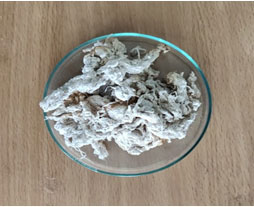 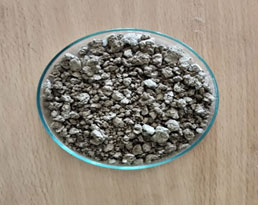 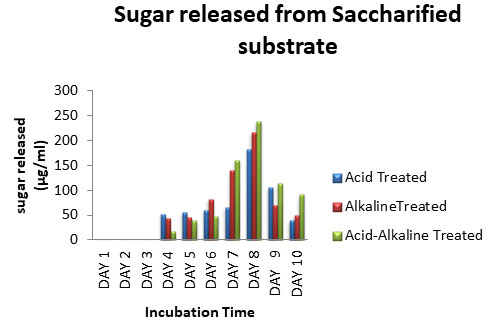 Separate Hydrolysis and Fermentation (SHF) of cotton ginning waste (CGW): In SHF of CGW, first the enzymatic hydrolysis was carried out for 8 days at 45˚C temperature. On 8thday maximum reducing sugar was obtained from CGW through saccharification using Aspergillus spp. Enzymatic hydrolysate obtained after saccharification of acid, alkaline and acid-alkaline treated substrates (CGW) was inoculated with S. cerevisiae for fermentation. The process was conducted at 30˚C temperature using 100 rpm in shake flask method up to 48 hrs.

After 24 hours incubation, samples were retrieved to determine the concentration of ethanol produced. Figures 10 to 12 shows the sugar utilization pattern and ethanol accumulation in the SHF inoculated with S. cerevisiae using cotton ginning waste (Sahu and Pramanik 2018). At 48 hrs. maximum content of ethanol were achieved by using separate hydrolysis and fermentation (SHF) method (Chaudhary and Padhiar 2016; Sahu and Pramanik 2018; Chaudhary and Padhiar 2020). 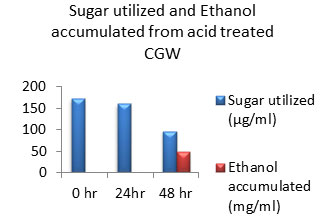 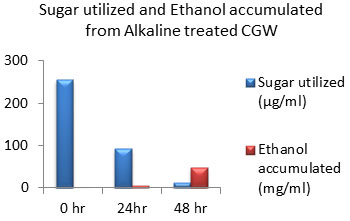 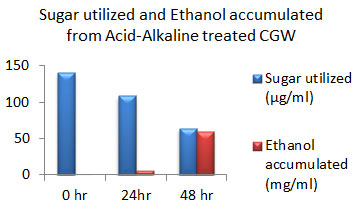 The fermentation process can be economical if it can convert both the pentose and hexose sugars in the hydrolysate to bioethanol. Saccharomyces cerevisiae can ferment only hexose sugars into ethanol. In present study the quantity of residual sugar was higher and the concentration of ethanol obtained in SHF is lower due to temperature difference between Saccharification and Ethanol Production. Aspergillus culture gave maximum Saccharification at 50oC and S. cerevisiae gave maximum ethanol yield at 30oC.

In one more research, 0.218g per gram yield of cellulosic waste mixture (office paper, newspaper and cardboard in 1:1:1 ratio) was testified (Iuliana et al. 2010). Acid-Alkaline pre-treated Cotton ginning wastes (CGW) proves better compare to only acidic or alkali pretreatment and these can be used for further scale up for bioethanol production (Chaudhary and Padhiar 2020).

Thus, the results of the present work clearly revealed that the cellulosic Cotton Ginning Wastes (CGW) could be converted into bio ethanol with enzymatic hydrolysis followed by fermentation. Thus, through appropriate use of a pretreatment process and a renewable feedstock like lignocellulosic biomass for production of a biofuel (ethanol) it is likely to serve as a sustainable substitute for energy production and reducing the requirement for crude oil (Sahu and Pramanik 2018; Chaudhary and Padhiar 2020).

The finding of the present study clearly flourished that the lignocellulosic Cotton Ginning Wastes (CGW) can be used for bio ethanol production with enzymatic hydrolysis followed by fermentation process. Among all the pretreatments, Acid-alkaline pre-treated substrate can be used to produced more amount of ethanol i.e., 60 mg/ml in comparison to acid and alkaline pre-treated CGW substrate. Result of this preliminary work can be exploited for pilot scale production and must be scale up for efficient bio ethanol production. Therefore, using a suitable pretreatment process and a renewable feedstock like lignocelluloses biomass for production of bio ethanol with Separate hydrolysis and fermentation method is very successful and can be used as an energy efficient process for renewable fuel generation.

This study was supported by Shri Maneklal M Patel institute of Science and Research, KSV University, Department of Biotechnology and Microbiology. Authors are thankful for giving an opportunity to carry out this research work and supporting throughout the work.

Chaudhary K and Padhiar A (2016). Study on the cellulase activity of fungi by solid state fermentation using cellulosic wastes. International Journal of Science and Research 5(11), 1637-1642.

Iuliana L, Gigi C and Gabriela B (2010). The Plackett-Burman Model-An improved alternative to identify the significant factors implied in the Bioconversion of the complex Cellulosic Waste to Ethanol. Innovative Romanian Journal Food Biotechnology, 7, 55-60.

Leustean I (2009). Bioethanol from lignocellulosic materials. Journal of Agrolimentary process and Technologies, 15(1), 94-101.

Yang B and Lu Y (2007). The promise of cellulosic ethanol production in China. Journal of Chemical Technology and Biotechnology, 82(1), 6–10.