5Senior lecturer of the Department of physical culture of the State University of Management, 109542, Moscow, Ryazan Avenue, d. 99,

According to various sources, 15–20% of the world territories, are the zones of ecological disaster, about 50% of the pop ulation live in environmentally unfriendly regions. Licorice medicinal plant with the scientific name of glycyrrhize globra is one of the medicinal plants used in cosmetics, food, health and pharmaceutical industries. The main aim of the study is to present the data on the correction of deviations concerning the adaptation system activity of 13-14-year-old adolescent bodies, exposed to chemical pollution of the environment by means of a phytoadaptogen based on licorice.According to the obtained data, they established the reduction of chemical, environmental pollution factor negative effect on the adolescent’s body: normalization of rhythm, blood pressure, heart rate, maximum oxygen consumption, and the adaptive potential of the circulatory system.The results of the study demonstrate that the use of licorice root extract as an adaptogen can help the normalization of blood pressure, heart rate, and variation range among 14-year old adolescents living in conditions of environmental chemical pollution. Besides, it can be concluded that licorice root extract is an positive natural adaptogen since it decreases the detrimental impact of chemical pollution factors on the adolescent body, and consequently results in relative normalization of blood pressure.

In recent decades, a large amount of scientific information has appeared about the influence of an unfriendly environment on the physical development and functional state of a child’s body (Agadzhanyan et al., 1993; Baevsky et al., 1987; Veltishchev and Fokeeva, 1996; Guminsky et al., 1990; Resenkova, 2003; Tolstikov et al., 1991; Ghorbanlou et al., 2020). The most acute issue is the need for effective measures aimed at body resistance increase in adverse environmental conditions. For many centuries, various medicinal substances have been used by medicine for the treatment and rehabilitation of humans. In recent years, some low-toxic biologically active herbal remedies are purposefully used in sports practice to accelerate recovery, actively replenish spent plastic and energy resources, and selectively control the most important functional systems of the body during heavy physical exercise (Brehman, 1969; Yermolova and Zimova, 2001; Kerimov and Kasumov, 1998; Resenkova, 2003; Sidorova et al., 2020).

Adaptogens are important among them. Adaptogens are the substances that have a general tonic effect on the body and increase its resistance during heavy physical exertion, under hypoxic conditions, and during drastic bioclimatic changes (Butova, 1999). Plant adaptogens can stimulate the nervous system and metabolic processes in the body moderately, which has a beneficial effect on the adaptation to physical exertion. Currently, herbal preparations based on licorice root are in the field of study by modern scientists (Brehman, 1969; Yermolova and Zimova, 2001; Resenkova, 2003; Streltsov, 2002). A number of authors indicate the presence of anti-toxic (Cekic et al., 2012;  Milashechkina, 2005) and immunomodulating (Ishida and Sympos, 1983; Halberg, 1969; Singamaneni et al., 2020) properties of licorice root.

Therefore, the goal of our study is to evaluate the effect of the drug on the basis of licorice on the leading adaptation systems of the adolescent body living in conditions of chemical, environmental pollution.Belyaev(1969),Rezenkova(2002),Milashechkina (2003) studied the effect of licorice extract on the processes of the organism adaptation. The authors found that the licorice root has the obvious adaptogenic effect, which is reflected in the harmonization of the hormonal balance and, thus, the stimulation of adaptive responses to environmental factors. The confirmation is the increase of physical performance, the resistance to hypoxia and better results in the development of physical qualities – general physical endurance. Also, the licorice extract implements its adaptogenic properties by optimizing the functional state of the central nervous system, helping to balance excitatory and inhibitory processes and to improve its quantitative and qualitative characteristics (Sadek et al., 2020) These data gave rise to the use of licorice root extract as a stress-limiting agent among a group of 14-year-old teenagers, in which most of the indicators revealed the most significant negative changes.

A phytoadaptogen, based on licorice extract, was given in the morning from 7.30 to 8.30 at the dose of 0.05 mg/kilogram of body weight (Resenkova, 2003). Also, to determine the adaptive capacity of the adolescent body, we used the indicators characterizing the state of regulatory mechanisms. The state of the respiratory system was determined by relative and absolute lung capacity (LC), chest excursion and maximal oxygen consumption (MOC) test, the state of the circulatory system and its regulatory mechanisms by cardiointervalography indices: HRV (heart rate variability), arterial pressure (AP), the adaptive capacity of the circulatory system and an individual minute duration.

The stress test recognized by the World Health Organization as an objective and informative indicator of the functional status of the cardiorespiratory system and the functionality of a person – the maximum oxygen consumption (MOC). According to the researchers, the indirect method for the determination of MOC was proposed by A.A. Guminsky (Dzhandarova et al., 2014). The evaluation of the test results was carried out according to the data presented in Table 1.

The adaptive potential of the circulatory system was determined by R.M. Baevsky’s method (Belyaev, 2002), adapted for the use on the child organism by P.A. Fileshy (Resenkova, 2003), the assessment was made in accordance with the data given in Table 2.

Table 2. Evaluation of organism functional capabilities according to the values of the circulatory system adaptive potential

The vital capacity of the lungs (VCL), expressed in litres, was measured using a spirograph. The subject drew the maximum inhale and then gradually exhaled the air through the mouthpiece into the spirograph. Cardio intervals were recorded and analyzed using the Varicard automated computer instrument. Statistical characteristics of the dynamic range of cardio intervals included: expectation (M), heart rate (HR) and standard deviation (s), expectation (M). The numerical characteristics of variational pulsograms along with indicators of statistical estimates were mode (Mo), variational span (Dx) and mode amplitude (АМо).

Individual minute (IM) was determined by F. Halberg’s method. According to the author method, the value of IM is a fairly informative test. The magnitude of myocardial infarction is a relatively stable indicator among healthy people. Mathematical-statistical processing of the survey results was carried out using Microsoft Excel software. The level of different significance for the studied parameters was determined using Student’s criterion. The results were considered statistically significant at p ≤ 0.05.

According to the data we obtained (Table 3), when you use a phytoadaptogen based on licorice VCL tends to increase among boys and girls, and SP has decreased significantly among boys (P<0,05), girls show the tendency of its decrease. This can be explained by the fact that the boys had more pronounced changes in blood pressure indicators as compared with girls, so they were also more sensitive to the effects of phytoadaptogen.

Table 3. The state of the cardiorespiratory system among 14-year-old adolescents living in a chemically contaminated area after photo correction

The intake of licorice root extract contributed to the normalization of the cardiovascular system functional capabilities (Table 4). The indicators of the expectation and heart rate variation decreased significantly among girls and boys, approaching the control group, as compared with the original (P>0.05).

Analyzing the indicators of IN before and after licorice extract application (Fig. 1), they revealed the increase of adolescent number with a state of vegetative balance, both among boys (66.77%) and among girls (45.45%), which indicates the “smoothing” of chemical pollution negative impact after the use of phytoadaptogen based on licorice root. Moreover, 20.3% of adolescents from the correctional group, had the value of IN even lower than in the control group, which, together with the change of expectation and variation scope indicators, indicates a high sensitivity of the vegetative nervous system to this phytoadaptogen.

Figure 1: IN in st. units among 14-year-old girls and boys, living in a chemically polluted area, after photo correction with licorice root extract 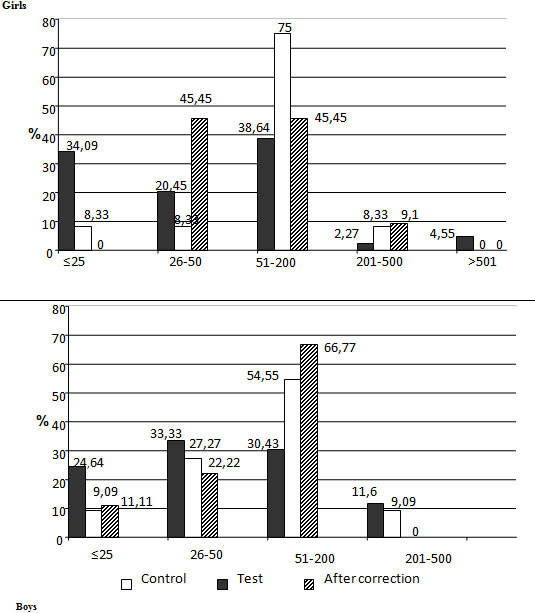 They revealed the positive effect of licorice extract on the level of adolescent body adaptive abilities (Table 5). Thus, the relative magnitude of MOC/kg improved by 1.26 times among girls, and by 1.32 times among boys and approached that in the control group. The same can be said about the indicators of the circulatory system adaptive potential and the duration of an individual minute (Table 5). After correction, the average values ​​of AP decreased and varied within the limits of a sufficient level of organism functional capacity of the organism (AP=1.61-2.09) both among girls and boys, averaging 1.93 ± 0.26. There has been an increase in individual minute duration.

In this study, the data on the correction of deviations concerning the adaptation system activity of 13-14-year-old adolescent bodies, exposed to chemical pollution of the environment by means of a phytoadaptogen based on licorice was investigated. The outcomes revealed that the application of licorice root extract as an adaptogen contributed to the normalization of blood pressure, heart rate, and variation range among 14-year old adolescents living in conditions of environmental chemical pollution, (Sadek et al., 2020).

Moreover, more pronounced changes towards the normalization of the functional state of the cardiorespiratory system were found among boys, which is probably explained by their more pronounced changes before correction. Among the adolescents of the correctional group, the level of adaptive capacity has increased, as was indicated by AP and MOC indicators. The indicators of IM approached those of the control group, which indicates the stabilization of rhythmostasis (Sidorova et al., 2020).

The study found that licorice root extract is an effective natural adaptogen because it reduces the negative effect of chemical pollution factors on the adolescent body: it leads to a relative normalization of blood pressure, heart rate indicators, individual minute and maximum oxygen consumption. This provides a scientific basis for the development and the use of herbal remedies based on licorice as adaptogens, in order to level the negative effects of environmental chemical pollution.

Belyaev N.G (2002). The use of licorice extract as a prophylactic means of disadaptation to physical exertion // Organizational and methodological aspects of strengthening the health status of student youth in the Siberian region. The mater. of interreg. scientific and practical conf. – Irkutsk. – pp. 137–138.

Butova O.A. (1999). Physiological and anthropological characteristics of adolescent health: Author’s abstract from the dis. by Doctor of medicine. – M. – 38 p.

Kerimov S.A., Kasumov Ch.Yu. (1998). The effect of licorice extract and tetrachlorethylene vapors on the level of some mediators of brain amino acid structure among young animals // Experiment. and clinic. pharmac.,. – №3. – pp. 54–56.

Milashechkina E.A. (2005). An integrated approach to the assessment of psychosomatic health and personality-oriented methods of its correction among the adolescents living in environmentally unfriendly areas. Author’s abstract from the Diss by the Cand. of Biology. – Stavropol,. – 21 p.

Resenkova O.V. (2003). The study of licorice extract effect on the processes of body adaptation. // Author abstract from the dis by the cand. of biol. – Stavropol, – 22 p.

Streltsov A.B. (2002). Bioindication of urban environment quality based on the analysis of the spatial distribution of pediatric ecopathologies. // The effect of environmental pollution on human health. Mater. from the 1st All-Russian conf. with international. part. – Novosibirsk, – pp. 34–35.