Although the implication of calcium signalling in the aetiology of anxiety remains elusive, drugs modulating calcium (like calcium channel blockers) have been discovered to be some worth beneficial as treatment option for anxiety related disorders. This study was therefore undertaken to assess probable ameliorative potential of verapamil against manic-like (stereotype behaviour) and anxiety-like symptoms in mice exposed to sleep deprivation. Mice were allotted into five treatment groups (n=5): group 1 and 2 received 10 mL/kg distilled water, groups 3 and 4 verapamil (25 and 50 mg/kg) while group 5 received astaxanthin (50 mg/kg) which served as the reference drug. Treatment was for 7 days and animals were sleep-deprived on the final 72 hours. Various behavioural tests to determine degree of stereotypical behaviour and locomotor activity were carried out. Anxiety test was done via the aid of a light/dark box and plus maze while stereotype behaviour was assess utilizing an open field box.

Oxidative stress parameters; malondialdehyde and glutathione were assessed. Histopathological perturbations in the caudate putamen were also recorded. Data were subjected to ANOVA at α0.05. The results obtained suggest that verapamil significantly suppressed stereotyped behaviour and reduced the incidence of manic-like behaviour which was induced by paradoxical sleep deprivation. Verapamil also significantly restored antioxidant levels and protected against loss of caudate neurons. In conclusion, verapamil ameliorates manic-like symptoms and anxiety in mice derived of sleep, while protecting brain neurons against oxidative stress damage induced by sleep deprivation.

Therefore, paradoxical sleep deprivation (PSD) is considered a good animal model for inducing mania-like behaviour, as it stimulates some aspects of a manic episode, such as hyperactivity, hypersexuality and aggressive behaviour (Martins et al. 2008; Benedetti et al. 2008; Mathangi et al. 2012). Apart from PSD, there is also extensive subjective evidence that stressful experience and other psychosocial factors contribute to the initiation and frequency of manic phases (Koyuncu et al. 2019; Baker et al. 2019; Ben-Azu et al. 2020). Mania which is a distinctive period of aberrantly and sustained elevated, energetic, irritable or elated mood, lasting for a week or any period until hospitalization is necessary (Paul and Allan 2012; Dailey and Saadabadi 2021).

Mania is the most distinguished stage of bipolar condition which is a foremost cause of disability, stigma, and cognitive impairment (Martinez-Aran et al. 2004; De Miranda et al. 2020). The possible causes of mania include; high levels of stress, alterations in sleep pattern or insomnia, use of recreational drugs or alcohol, seasonal changes, child birth or could be even due to a major significant change in the life of an individual such as going through a divorce. The indicators of mania may consist of increased talkativeness or activity, loss of appetite, disinhibition, decreased need for sleep, reckless behaviour or grandiosity, which causes severe mood distortion which affects normal functioning of the individual in daily living, psychomotor agitation, hyper-sexuality, and increased reward-seeking behaviours (American Psychiatric Association 2000).

These medications might be hindered by side effects (antidepressants), habituation and tolerance (benzodiazepines), or inefficacy in some anxiety disorders (buspirone) (Goldstein 1985). Therefore, medications with probable theoretical efficacy and low side effect profile are sought after. Calcium channel blockers (CCBs) seem to meet these criteria. The CCBs, are more generally used as treatment options for cardiovascular disorders (cardiac arrhythmias, angina pectoralis, and hypertension) (Das and Plow 2010).

However, the discovery that CCBs crosses the blood-brain barrier and act directly on neuronal cells by binding to numerous brain regions suggesting that they might offer some beneficial effects as treatment options for neuropsychopathological disorders and even reduce anxiety (Urien, et al. 1987; Umukoro et al. 2010). Verapamil is among the most studied CCBs, and has shown positive activity in neurological related disorders (Umukoro et al. 2010; Dailey and Saadabadi 2021).

Dubovsky (1994) emphasized that intracellular calcium (Ca2+) plays a fundamental role in various physiologic processes, namely; action potential, release of neurotransmitters, and functioning of receptors implicated in neuronal periodicity and mood disorders. He pointed out that different antimanic drugs have calcium antagonist properties. Although the precise mechanism of CCBs in these conditions remains unknown, the interference of these drug class with calcium metabolism is a key mechanism of their action in mental disorders (McCarty et al. 2021).

Since a recent longitudinal study has posited that (i) insomnia and other associated sleep glitches worsen before a manic episode, (ii) lack of sleep can trigger mania, and (iii) that sleep problems also adversely affect mood and contribute to relapse, we decided to induce mania in mice by the process of PSD employing the platform over water model in this research while investigating the possible ameliorative potential of verapamil against such manic-like symptoms. Note that PSD is not able to cause mice to exhibit bipolar disorder, but does induce a mania-like behaviour (McCarty et al. 2021).

Male mice (Albino Swiss) weighing 22.0±2.0g, used for this study were procured from the Animal House, College of Health Sciences of Delta State University, Abraka and were held in rectangular plastic cages at ambient temperature. They were fed with balanced rodent diet and had unrestricted access to water ad libitum. Animal handling was done according to internationally established guidelines on animal care and handling with necessary approval from the Ethical Committee of the University. Mice were individually suspended on grids (2.5 cm apart) over water in a rectangular thermoplastic cage (1.2 cm beneath the grid). Although this design predominantly targets REM sleep, a significant loss of non-REM sleep, accompanied by a significant amount of stress is unavoidable. At the expiration of the 3-day sleep deprivation period, the outcome of sleep restrictions on motor function and manic-like symptoms was assessed between 9:00 am and 12:00 noon.

The rodent sleep deprivation model was chosen to mimic circadian rhythm changes associated with mania. This model offers significant relevance as regards face validity since sleep loss is a notable feature of mania, and can therefore trigger this disorder in patients (Wehr 1992; Mansell and Pedley 2008; McClung 2011).  Moreover, sleep deprivation induces several manic like behaviours, such as insomnia, hyperactivity, aggressive actions toward other animals, hyper sexuality (an increase in mounting behaviour), and stereotypy (sniffing and rearing) (Hicks et al. 1979; Fratta et al. 1987; Gessa et al. 1995; Abrial et al. 2015). These behaviours were measured in the animals and all data were presented as mean ± standard error of mean of the grouped mice. The result was analysed using ANOVA and post hoc tests (Student’s Newman–Keuls) were utilized to determine the source of main significance for every test, which was set at α0.05 (De Miranda et al. 2020).

Previous studies also demonstrated that PSD induces hyperactivity (increased locomotor activity), which treatment with lithium attenuated (Benedetti et al. 2008; Armani et al. 2012; De Miranda et al. 2020). As obtainable in Table 1 and Figure 1 below, sleep deprivation significantly increased manic-like behaviour in PSD mice. However, the results obtained revealed that verapamil, at both doses, caused a significant reversal in hyperactivity and the various stereotype behaviours. Thus, indicating the probable use of verapamil in the reduction or attenuation of manic like symptoms. 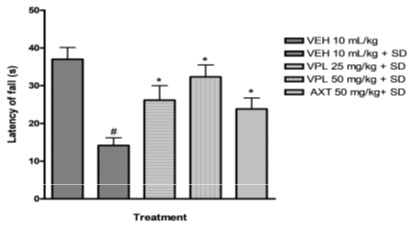 The tests for anxiety were conducted using a light/dark box and plus maze. Sleep deprived animals spent longer period in the dark box compared to animals that were not sleep deprived. In the plus maze, the sleep deprived mice expended much time in the closed arm than open arm; signifying classic indication of anxiety. However significant variations were observed when verapamil was administered – the mice spent lesser period in the dark box and more in the light box compared to with vehicle plus sleep deprived group, and for the plus maze, the mice spent significant time in open arm than closed arm, thus signifying that verapamil could possibly be used to attenuate the ministrations of anxiety associated with sleep deprivation (Table 2 and Table 3).

Table 3: Effect of verapamil on anxiety in sleep deprived mice using the plus maze

Verapamil on brain oxidative stress in sleep-deprived mice: In the present study, alteration of pro-oxidants and antioxidant enzymes were seen alongside the behavioural alteration. Marked reduction in glutathione levels was observed (Figure 3) alongside increase in malondialdehyde levels (Figure 2). 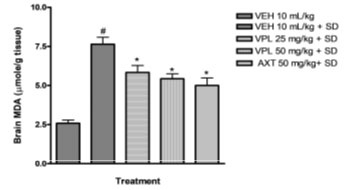 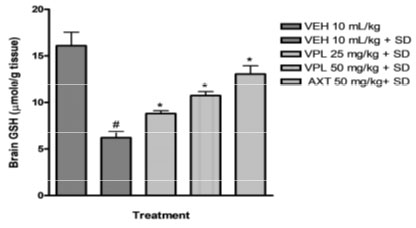 This agrees with previous findings which reported increased products of inflammation, lipid peroxidation, including alterations of the major antioxidant enzymes in bipolar disorder (BD) subjects particularly within the mania spectrum (Kuloglu et al. 2002; Ranjekar et al. 2003; Ozcan et al. 2004). In addition, animal studies also have earlier shown that PSD increases brain lipid peroxidation (Kumar and Garg 2008; Garg and Kumar 2008).  In the group that received verapamil, a reversal in the decrease of glutathione levels was seen, and a decreased malondialdehyde levels was observed further indicating the probable use of verapamil in the reversal of manic-like symptoms induced by sleep deprivation (De Miranda et al. 2020).

Verapamil on pain and nociception in sleep-deprived mice: Results obtained indicate that verapamil produced an anti-nociceptive effect by reducing the pain threshold and increasing reaction time of PSD mice as recorded by the two tests; hot plate (Figure 4) and tail flick (Figure 5). This gives an indication that verapamil may be useful in the mitigation of pain in patients that experiencing sleep difficulties. This also supports previous studies which showed that PSD contributes to hyperalgesia. It is, thus, logical to infer that PSD aggravates chronic pain symptoms in patients (Smith et al. 2000). Also, patients with pain disorders normally suffer anxiety due to the strain associated with living with pain. Note that the effect of verapamil on pain differs depending on dose, route of administration and pain test utilised (Tamaddonfard et al. 2014).

Figure 4: Effect of verapamil on reaction to nociception in mice
subjected to sleep deprivation using the hot plate 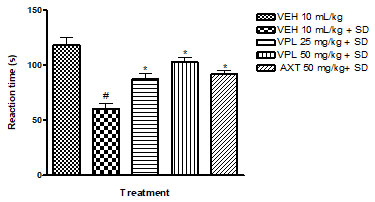 Figure 5: Effect of verapamil on response to nociception in mice subjected
to sleep deprivation utilizing the tail flick test 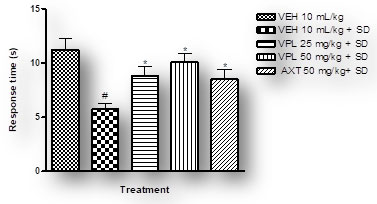 Figure 6: Photomicrograph of the caudate putamen of mice
after paradoxical sleep deprivation 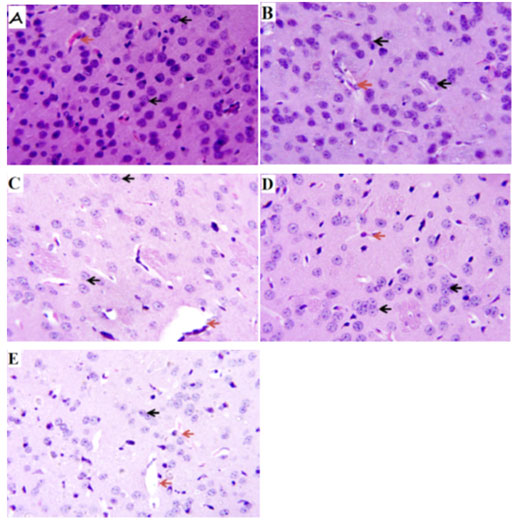 Figure 7: Effect of verapamil on viable caudate putamen
neurons in mice after subjection to sleep deprivation 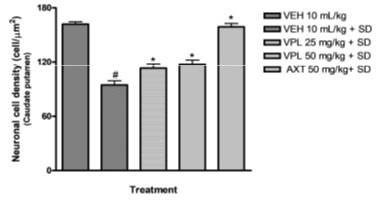 Counts were based on neuronal nuclei present in three (3) squares per slide, using the pre-calibrated Image J software.

The finding of the present experiment suggests that verapamil attenuated anxiety/manic-like behaviour induced via deprivation of REM phase sleep, through a mechanism believed to be associated with reduced oxidative stress, and neuronal damage. Verapamil also significantly restored antioxidant levels and protected against loss of caudate neurons. In conclusion, verapamil ameliorates manic-like symptoms and anxiety in mice derived of sleep, while protecting brain neurons against oxidative stress damage induced by sleep deprivation.

This work was technically supported by the laboratory technicians of Pharmacology laboratory, DELSU.

Dubovsky SL. (1994) Why don’t we hear more about the calcium antagonists? An industry-academia interaction. Biol Psychiatry, 251;149-150.

Kumar A. and Garg R. (2008). A role of nitric oxide mechanism involved in the protective effects of venlafaxine in sleep deprivation. Behavioural Brain Research, 194:169-173.

Mansell W. and Pedley R. (2008). The ascent into mania: a review of psychological processes associated with the development of manic symptoms. Clinical Psychological Review, 28: 494–452Y.

Mathangi DC, Shyamala R. and Subhashini AS. (2012). Effect of REM sleep deprivation on the antioxidant status in the brain of Wistar rats. Annals in Neuroscience, 19: 161.

Urien S, Pinquier JL, Paquette B, et al. (1987). Effect of the binding of isradipine and darodipine to different plasma proteins on their transfer through the rat blood-brain barrier. Drug binding to lipoproteins does not limit the transfer of drug. J Pharmacol Exp Ther 242:349-353.