Biodiesel is an environmental friendly, renewable and biodegradable fuel and a potential substitute to conventional diesel, and can be produced using vegetable oil with short chains of alcohol. Due to the high cost of produced biodiesel, it is required to explore inexpensive feedstock with high value-added by products.  Rice bran is a by-product of rice milling which is mainly used as animal feed and oil produced is used for industrial applications. Rice bran oil (RBO) can be used as a low-cost feedstock for biodiesel production as compared to traditional oils derived from cereal or seed sources. In this study, rice bran was taken as feedstock and oil was extracted from it which was further converted to Biodiesel. Optimization of oil extraction process from rice bran was done taking into account the affecting factors like solvent used for extraction, solvent to solid ratio and extraction time. Biodiesel was produced from extracted rice bran oil using lipase as catalyst. Process variables like molar ratio of methanol to oil and catalyst concentration were studied for maximum ester yield. The optimized conditions for oil yield were found to be hexane as best solvent, 10:1 solvent to solid ratio and 8 h extraction time. Further, the produced RBO was utilized for lipase enzyme catalyzed biodiesel production. The process parameters affecting ester yield were optimized and were found to be 6:1 methanol to oil molar ratio and 4% (w/woil) lipase enzyme concentration. The RBO biodiesel was characterized and found to fulfill the requirements of ASTM and DIN international standards for biodiesel.

The increase in industrialization and population worldwide have created a huge demand for fuels and at the same time increased air pollution and decrease in fossil fuels deposits. Hence, there is a requirement of developing new forms of renewable and eco-friendly fuels (Venkanna and Venkataramana, 2009; Dayang et al., 2019; Febrian et al., 2020). One of the approaches is waste-to-energy technologies, where waste matter is converted into renewable energy. This technology can solve both problems: waste and energy. Waste can be treated and reused to be converted into the various forms of fuel which can be used for energy generation. The conversion of waste into biofuel has become more attractive due to it being low-carbon, locally available, safe, and sustainable for the economy (Rengasamy et al., 2018; Goga et al., 2019

Biodiesel is a biofuel that is produced from the transesterification reaction of vegetable oils, animal fats, or grease. Biodiesel can be used as a substitute for petro diesel because it can be used in any diesel engine without modification (Dayang et al., 2019). Biodiesel is nontoxic, biodegradable, has a high flash point, and reduces emissions of unburned matter and particulate matter (Dayang et al., 2019; Anh et al., 2020). Initially the production of biodiesel was focused on edible oils such as vegetable oil (soybean oil, sunflower oil, and cottonseed oil) and animal fat. Agricultural industries are the main contributor of raw material in producing biodiesel (Nguyen et al., 2019).

India being the largest producer of rice (Oryza sativa) has a capability to manufacture about 1 million tonnes of RBO per year. Rice bran containing 15-23% oil is a byproduct of rice milling (Syed et al., 2016; Bani et al., 2018). Rice bran oil contains naturally occurring bioactive and antioxidant compounds. De-oiled rice bran is used as poultry and cattle feed due to its high protein content and vitamins (Fajriyati et al., 2019; Anh et al., 2020). Presently, the industry is utilizing rice bran of around 3.5 million tonnes to produce around 0.65 million tonnes RBO. This unused non-edible oil can be used as an alternative energy source to reduce the biodiesel production cost. The objective of this study was to extract oil from rice bran and produce biodiesel from it. The effect of different process parameters like solvent type, solvent to solid ratio, reaction time affecting the oil yield and variables like alcohol to oil molar ratio, concentration of catalyst affecting the biodiesel yield were studied. Characterization of the produced biodiesel was also done in this study.

For the materials, rice bran was obtained from local rice mill, Hubballi. Laboratory grade hexane, petroleum ether and methanol were procured from SRL Pvt Ltd. Lipase enzyme was procured from Sigma Aldrich Company. For the extraction of oil from rice bran, twenty grams of powdered rice bran husk was taken in a Soxhlet extractor. 200 ml of hexane / petroleum ether was used in the extraction process. Soxhlet extractor was operated for a reaction time of 8 h and the extract was subjected to filtration using Whatman filter paper to remove the suspended particles. Then it was subjected to rotary evaporator for oil solvent separation. The percentage of oil yield was determined by the ratio of amount of oil extracted by the amount of rice bran husk taken multiply by 100.

For the process parameter optimization for rice bran oil extraction, the effect of three main parameters on oil extraction was studied. The solvent type, extraction time and solvent to solid ratio were studied and optimized the operating conditions for maximum oil yield. Twenty grams of meal (rice bran husk) was subjected to two different solvents namely petroleum ether and hexane, solvent to solid ratio between 6:1 to 10:1 v/w and reaction time between 1 h to 8 h. The optimum conditions were determined by varying one factor at a time. For the process parameter optimization for RBO biodiesel production, transesterification involves catalyzed reaction between triglycerides and an alcohol yielding esters and glycerol. To optimize the operating conditions for RBO biodiesel production, one factor at a time (OFAT) was used. The effect of lipase concentration (1%, 2%, 3%, 4% w/woil), and molar ratio of methanol to oil (2:1, 4:1, and 6:1) on biodiesel production was studied. Methanol and lipase catalyst were mixed and then added to RBO in the conical flask. The conical flask was plugged to avoid evaporation of methanol and then placed on a shaker for 24 h at 150 rpm at room temperature.

The mixture was kept in the separating funnel overnight where glycerol was separated by gravity separation. The biodiesel produced was washed with warm water several times to remove catalyst, glycerol residuals and methanol. The crude biodiesel was then heated at 100 oC in an open pan to remove all the water particles. The % biodiesel yield was found by the equation: [weight of Biodiesel produced/ weight of oil taken] * 100. For the produced biodiesel physical properties such as carbon residue, density, flash point and viscosity were found. For the characterization of rice bran oil biodiesel, the characterization of RBO biodiesel was done using standard test procedures. Density was determined by ASTM D1298, Flash point by ASTM D93, Kinematic viscosity by ASTM D445 and Carbon residue by ASTM D4530.

Process parameter optimization for RBO extraction: Effect of solvent type on oil yield: Two different solvents petroleum ether and hexane were used to determine their influence on oil yield. Fig. 2 shows the oil yields by the solvent’s petroleum ether and hexane. The oil yield with hexane (6.25%) was observed to be more than that of petroleum ether (4.16%) by 2.09% as evaluated at the end of all experiments conducted, by varying the other two parameters. Therefore, hexane was considered best solvent for RBO extraction. It is similar to the results obtained by (Tamilarasan and Sahadevan, 2012; Syed et al., 2016; Shukla and Pratap, 2017; Majid et al., 2019). 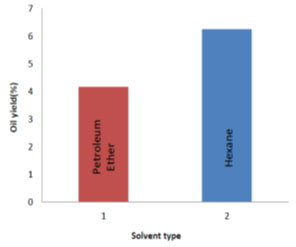 Figure 3: Effect of solvent to solid ratio on oil yield for a reaction time of 1 h. 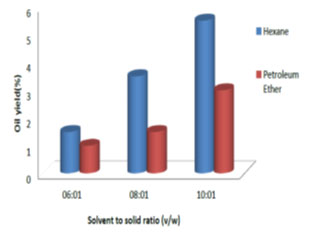 Figure 4: Effect of solvent to solid ratio on oil yield for a reaction time of 3 h. 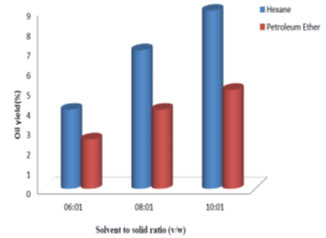 Figure 5: Effect of solvent to solid ratio on oil yield for a reaction time of 6 h. 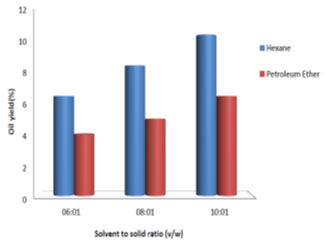 Figure 6: Effect of solvent to solid ratio on oil yield for a reaction time of 8 h. 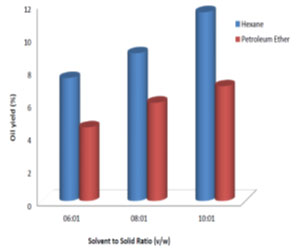 Figure 7: Effect of molar ratio of methanol to oil on biodiesel yield for a catalyst concentration of 4% 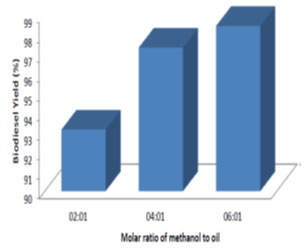 Figure 8: Effect of catalyst concentration on biodiesel yield for 2:1 molar ratio of methanol to oil 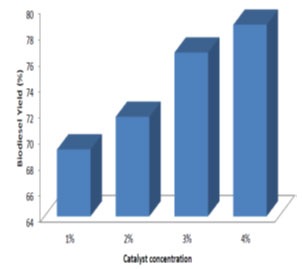 Figure 9: Effect of catalyst concentration on biodiesel yield for 4:1 molar ratio of methanol to oil 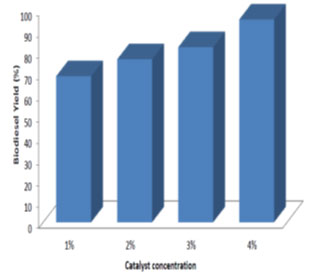 Figure 10: Effect of catalyst concentration on biodiesel yield for 6:1 molar ratio of methanol to oil 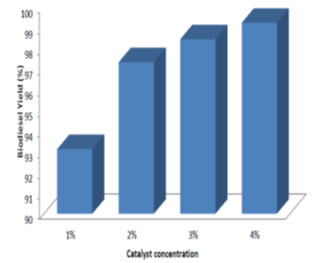 We are thankful to the staff of Biotechnology and Mechanical department, K.L.E. Technological University, Hubballi, India, for their help and support in conducting this research work.

Conflict of Interest: Authors have no conflict of interest

Arumugam, A. and Ponnusami, V. (2017). Production of biodiesel by enzymatic transesterification of waste sardine oil and evaluation of its engine performance. Heliyon, 3(12):1-18.