L-glutamic acid is a non-essential, proteinogenic amino acid. Its large-scale industrial production using fermentation strategies was initiated in 1957. L-glutamic acid has a huge industrial demand which accounts for about more than fifty lakhs tons /annum throughout the globe. Japan, United States, South Korea, China and Europe are some major producer countries. Several trials have been made to scale-up the process by optimization of different parameters by one factor at a time. But recent studies revealed that Response Surface Methodology (RSM) is the most effective tool for process optimization as it involves multiple factors at a time. For this paper, Response Surface Methodology (RSM) was used for statistical optimization of fermentation conditions that influence the yield of L-glutamic acid by a biotin auxotrophic mutant Corynebacterium glutamicum X680.

Response surface optimization of Box-Behnken design (BBD) was applied to evaluate the effects of culture conditions including some medium composition components. Among the variable screened, inoculum age, temperature, glucose concentration and urea concentration had significant effects on product yield. Production was significantly (p<0.05) increased. Inoculum age, 48.92 h; temperature, 29.99oC; glucose,11.56% and urea, 1% could result in highest L-glutamic acid production of 25.61 mg/ml by Corynebacterium glutamicum X680 as predicted by RSM which is very close to the actual value 25.7mg/ml that confirmed its validity. RSM appeared as a very effective tool for optimization of L-glutamic acid production by this mutant. This research has been conducted to bolster future researches with credible information and updated references. This paper can act as a primary source for future studies to begin their research from.

L-glutamic acid is a proteinogenic, non-essential amino acid. It was first discovered by Ritthausen in (1866) on hydrolysis of gliadin (Ritthausen 1866). In (1908), a Japanese scientist Kikunae Ikeda observed that glutamate was essential for a meal to taste good (Ikeda 1908). He isolated glutamic acid from kelp like sea weed broth, locally called ‘konbu’ (Laminaria japonica) in Japan. Later it was also found in asparagus, hydrolysate of wheat gluten, tomato, cheese etc. He identified L-glutamic acid as a separate food additive with a distinct taste which was a century later identified as the fifth basic taste modality ‘umami’ (Lindemann et al. 2002).

Next, in the year (1909), monosodium salt of glutamic acid was commercialized as monosodium glutamate (MSG) by Ajinomoto co. and gained the popular trade name Ajinomoto. Since then, it was used in the wide range of products within processed industry, as a flavoring agent to influence market economy (Ault 2004; Alharbi et al. 2020).

Several trials have been made to improve the commercial production of L-glutamic acid. Initially hydrolysis of protein was used but it turned out to be a cumbersome process. Later, its chemical synthesis was also tried, however, during the course of its synthesis, racemic mixture of DL isomers was generated from which separation of metabolically active L-isomer of glutamic acid was very difficult (Sano 2009; Alharbi et al. 2020).

Over and above its flavor enhancing capacity, it has several commercial values. It is a precursor of multiple amino acids such as proline and arginine. It is also a neurotransmitter. So, excessive use of MSG as flavor enhancer may lead to development of neurotoxicity (Xiong et al. 2003). It has got several pharmaceutical and therapeutic uses. In cosmetic industry, glutamic acid and its derivatives are widely used (Hermann 2003; Lee et al. 2014; Alharbi et al. 2020).

A new dimension has opened through the discovery of L-stereo-specific glutamic acid over producer microorganism from Japanese soil in 1955-56 by a group of scientists of Kyowas Hakko Co. Inc headed by Dr. Shigezo Udaka (Kinoshita 1987). Multiple efforts led to development of several L-glutamic acid over producers through a series of successful research through several decades. But the major constrain of its industrial production lies upon its huge production cost. So, reduction of its production cost is another motto (Joseph and Rao 1973; Kishimoto et al.

Considering its huge industrial demands (which accounts for about more than fifty lakhs tons /annum throughout the globe), Japan, United States, South Korea, China and Europe are the major the major producer countries (Liu 2019). However, the huge market demand for L-glutamic acid in the fast-food industries in India is almost totally dependent on import. Each microorganism grows well within a definite range of environmental consortium which imparts the necessity for optimization of its culture conditions. Response surface methodology (RSM) is a strong statistical tool for analyzing the effects of multiple parameters on the process (Baş and Boyaci 2007; Mansouri et al. 2012; Zafar and Mahmood 2015).

L-glutamic acid accumulated in the fermentation broth was analyzed by Thin Layer Chromatography (TLC) method using silica gel (Merk, Germany) using n-butanol: methanol: water as mobile phase in a ratio of 5:4:3 (v/v/v) and the spots were visualized using ninhydrin (0.2%) in alcohol followed by heating. The product was confirmed as L-glutamic acid by FT-IR (Fig 2).

L-glutamic acid recovered from the fermentation broth was analyzed further by agilent 1200 Infinity HPLC (using a phenyl-hexyl column and 50mM N-methylmorpholine/acetate buffer with pH 7.4 containing 12% acetonitrile as elute solvent and detected by UV absorption at 636nm with a flow rate of 1ml/min for 2.5 min and 2ml/min for 1.5 min). After filtration through a membrane filter (0.22µm), the sample was analyzed by HPLC to measure the amount of L-glutamic acid relating to the standard calibration curve.

The first step in this study was to identify the levels of process parameters which have high influence on enzyme production (response). After preliminary screening, a Box–Behnken factorial design (BBD) was employed for further optimization of the effective level of four most inﬂuencing factors for production of L-glutamic acid. An experimental design comprising 29 experimental run was created using the four parameters at three equidistance level (−1, 0 and +1) on Design Expert 12 software (Stat ease Corp, USA). The response was tannase activity (U/ml). A polynomial quadratic equation was adopted to evaluate the contribution of each independent variable in this process.

Where, Y is the predicted response; xi and xj are the independent variables in coded values that inﬂuence the response, βo the offset term; βi represent the linier effect of xi; βij represent the interaction effect between xi and xj; βii represent the quadratic effect of xi. Regression analysis and estimation of the coefﬁcients were performed using Design Expert software (Stat ease Corp, USA).

Overproduction of desired metabolite by submerged fermentation is not only dependent on the selection of suitable strain, but also optimization of culture conditions and downstream purification technology exert significant impact (Alharbi et al. 2020). In this present investigation, after preliminary OVAT analysis it was found that four factors viz. inoculum age, temperature, glucose concentration and urea concentration play pivotal role in L-glutamic acid production by the Corynebacterium glutamicum X680. Subsequently, the effects of these four factors were optimized through RSM according to BBD.

A total of 29 run with different combination of the four variables (in three equi-distance levels) along with the actual and predicted responses were presented in Table 1. ANOVA of the quadratic regression models suggested that the models were signiﬁcant with a computed F-value of 183.93 for L-glutamic acid production and P-value (Prob> F) lower than 0.0001 (Table 2). A lower value for the coefﬁcient of variance (P < 0.0001) suggests higher reliability of the experiment. The ﬁtness of the model was also examined by the coefﬁcient of determination (R2).

In the present study, R2 values were found to be 0.9946 that indicated the response models can explain 99.46% of total variations for L-glutamic acid production and the rest may occur due to chance. Analysis of the quadratic effect indicated that all variables signiﬁcantly contributed to these responses (P < 0.05). The models also showed statistically insigniﬁcant lack-of-ﬁt of 4.70 for L-glutamic acid. All the statistical indices suggested that the models were suitable to represent the real relationship among the selected factors for L-glutamic acid production by Corynebacterium glutamicum X680.

The mutual effects of any two factors on L-glutamic acid were also found encouraging. The most signiﬁcant (P < 0.05) mutual interactions for L-glutamic acid production was in between inoculum age and urea concentration followed by temperature and glucose concentration which are revealed by AVOVA data (Table 2) and response surface-contour plots (Fig. 1).

Using Design Expert 12 numerical optimization subroutine design space was explored with the ﬁtted quadratic model to arrive at an optimum fermentation condition. The optimized variables were found using a desirability objective function that assigns relative importance to the responses.

Solutions with higher desirability suggested inoculum age of 48.92 h, temperature of 29.99oC, glucose concentration of 11.56% and urea concentration of 1% could resulted in highest L-glutamic acid production of 25.25.61 mg/ml by Corynebacterium glutamicum X680. Under these conditions, conﬁrmation experiments were conducted in three replicates and the result have good agreement with the predicted model which validate the suitability of the model (Guo et al. 2017; Fahimitabar et al. 2021).

The Model F-value of 183.93 implies the model is significant. There is only a 0.01% chance that an F-value this large could occur due to noise. 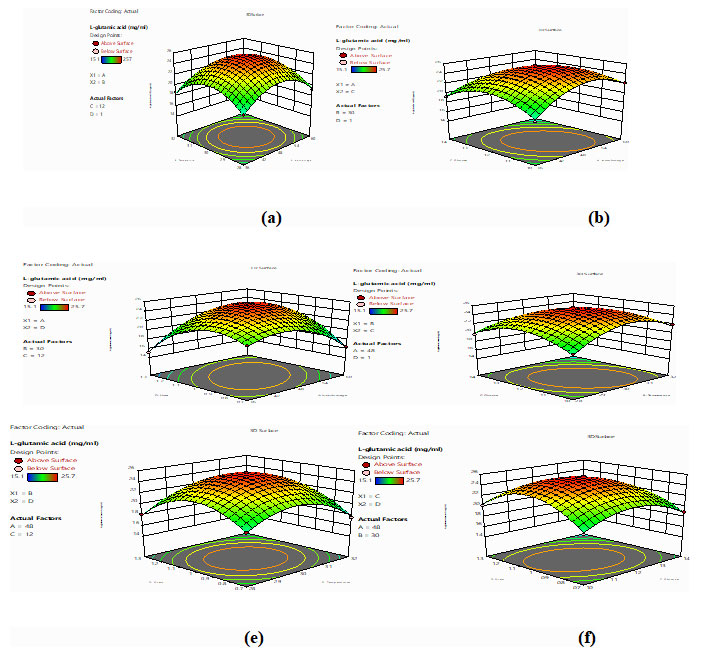 Yang et al. (2014) optimized fermentation conditions using Streptomyces albus Y07 as a high yielding strain through RSM. Nor et al. (2017) made a comparative analysis on medium optimization for L-lysine-methionine production by a newly isolated strain Pendiococcus pentosaceus RF1 using one factor at a time, Response Surface Methodology and artificial neural network (Nor et al. 2017). RSM appeared as a very effective tool for this experiment. Medium optimization for ε-poly-L-lysine production by Streptomyces diastatochromogenes was carried out by Guo et al.

(2017) using RSM. Very recently, Alharbi et al. (2020) noted RSM as a very effective statistical tool for optimizing culture conditions for L-glutamic acid production by Corynebacterium glutamicum NCIM2168, however the production was 16.499g/L. Very recently, Fahimitabar et al. (2021) also applied RSM for optimization of L-glutamic acid by Corynebacterium glutamicum in batch fermentation. In our present study, it has been found that RSM appeared to be a very effective tool so far as the optimization of L-glutamic acid production by the mutant was concerned considering multifactorial interactions at a time (Fahimitabar et al. 2021).

The findings of the present study targets RSM that helps to point out the causal relationship between different factors and response using a reliable and robust mathematical model. For the validation of this model, statistical and regression analysis was done. It was found that among different variables involved, most effective variables are inoculum age, 48.92h; temperature, 29.990C; glucose, 11.6% and urea, 1%. Under theses optimum conditions, the predicted response for L-glutamic acid was to be 25.61mg/ml and the actual value was found 25.7mg/ml under the same conditions. These results implied the validity of the predicted value by RSM and experimental value was quite close.

Kinoshita S (1987) Amino acids and nucleotide fermentation: From their genesis to their current state. Developments in Industrial Microbiology Vol 28 Pages1-12.