Antibacterial activity was measured using the microtiter broth dilution method to determine the minimum inhibitory concentration (MIC), as well as the minimum bactericidal concentration (MBC). Approximately 112 bacterial strains were isolated from 78 swab samples. Out of these bacterial strains, eight were identified as pathogenic bacteria using 16s rRNA sequences. All of these eight strains were derived from the Genus Acinetobacter. Among them, two strains of Acinetobacter were resistant to 14 different antibiotics. These two bacteria were identified as Acinetobacter baumannii and Acinetobacter sp. These MDR strains have been used for antibacterial activity against plant extract. The results showed that the MIC of the extract against these pathogenic strains was approximately 4 mg. Therefore, it is concluded that the plant extract has the ability to kill MDR resistant Acinetobacter strains in an ecofriendly way.

The genus Acinetobacter contains over 30 species, the majority of which live in soil and water, but some commensal strains have been isolated from human specimens (Visca et al. 2011). A. baumannii, a member of this genus, is thought to be clinically significant due to its multidrug resistance and high mortality rates in people with weakened immune systems worldwide (Peleg et al. 2008; Poulikakos et al. 2014). Several studies have supported the isolation of A. baumannii from various environmental sources.

The intensive study of clinical isolates of A. baumannii, on the other hand, does not reveal the species’ diversity. As a result, environmental isolates are critical for understanding the diverse nature of A. baummanii (Berlau et al. 1999; Huys et al. 2007; Diancourt et al. 2010; Hamouda et al. 2011; Asaad et al. 2021). Actinetobacter baummanii has emerged as a secondary infectious pathogen in critically ill patients who have been hospitalized for extended periods of time with intensive procedures prior to the use of antimicrobial drugs (Gottesman et al. 2021).

This species plays a significant role in healthcare-associated infections in institutions around the world (Perez et al. 2007; Gottesman et al. 2021). Bacterial resistance to antimicrobial drugs has prompted the United Nations to address the antimicrobial resistance problem. The emergence of multidrug resistant (MDR) A. baumannii mutants, which cause nosocomial infections, has harmed many countries in Asia, Latin America, Europe, and the Middle East (Saudi Arabia), where endemics have been reported worldwide (Tognim et al. 2004; Kim et al. 2013; Moradi et al. 2015).

MDR is most commonly found in adults in intensive care units, with cabapenem resistance being the most common phenotype (Mustasim 2018; Adel et al. 2020; Arta et al. 2019). Curing the majority of human and domestic animal diseases with natural products is primitive and goes hand in hand with human civilization. Traditional medicines are primarily derived from medicinal plants, and various active ingredients in medicinal plants are used to treat a variety of diseases (Woldeyes et al. 2012; Handique et al. 2016; Noha 2021; Fahim 2021).

Recently, there has been an increase in concern about plant-derived drugs, which demonstrate the significance and validity of traditional claims about the value of natural products in healthcare. When compared to synthetic drugs, the researcher’s interest has been focused on the exploration of antimicrobial drugs derived from plants/microorganisms that are safe, healthy, and cost effective, with no side effects on the host (Cragg and Newman 2001; Nitha et al. 2012; Chen et al. 2021).

Pathogens are becoming increasingly resistant as a result of widespread and ineffective treatment of infectious diseases. As a result, scientists are eager to investigate plants for biologically active ingredients that are effective against infectious bacterial and other microorganisms (Shears 2000). Coleus forskohlii is a member of the Lamiaceae family, which has a vast number of members that are generally found in the Mediterranean region (lukhoba et al. 2006).

Phytochemical examination of C. forskohlii reveals the distribution of several phytochemicals such as alkaloids, reducing sugars, flavonoids, tanins, and terpenoids. Flavonoids in phenolic compounds are well-known for their anti-allergic, anti-cancer, antioxidant, and anti-inflammatory activities (Aiyelaagbe and Osamudiamen 2009; Alasbahi et al. 2010).

According to Ammon and Muller (1985), the C. forskohlii plant can be used to cure a variety of maladies including insomnia, heart disease, respiratory issues, epilepsy, angina, asthma, intestinal issues, abdominal colic, and inflammation. Different bio-active chemicals, such as terpenoids, phenolics, saponin, tanins, and alkaloids, were found to scavenge free radicals created in the body in another study (Rout et al. 2012).

For sampling, swab samples were collected from Different area in Prince Meshari Bin Saud General Baljarshi Hospital. The bacterial Samples were directly taken to the laboratory and we kept in the refrigerator prior to further experimentation. For bacteria isolation, about 1 ml of collected samples were added to 100 ml freshly prepared nutrient broth medium and incubated at 30 °C and 180 r/min for 24 hours. The sample was serially diluted and were spreaded on the plates. After incubation the pure colonies were transfer 50 % glycerol. The samples were preserved in -80 °C until further experimentation.

For the preparation of ethanolic extract, the dried plant sample was treated with absolute ethanol at a 1:20 ratio on a magnetic stirrer for 48 hours before being filtered with Whattman No. 1. The supernatant was evaporated using a Rotary Evaporator until an oily extract was obtained. The crude extract was then stored in sterile universal bottles at -20 °C. For antibacterial activity determination, agar diffusion method or agar well diffusion was used to test the antibacterial activity of various Ethanolic extracts (Daoud et al. 2015). A fresh bacterial culture (1 ml) was pipetted into the center of sterile petri dishes.

In the petri dish, molten cooled Muller Hington agar (MHA) was thoroughly mixed with the inoculum. A sterile cork borer was used to make 6 mm wells after the bacteria-containing agar plates solidified. These wells were filled with extracts (20% w/v) in 100 ml increments. Following a 24-hour incubation at 37 °C, the plates were chilled for 30 minutes to allow the extracts to better diffuse into the agar. The antibacterial activity is determined after the incubation period by measuring the zone of inhibition (including wells measurement). For the experiment, DMSO (10%) was used as a negative control (Daoud et al. 2015).

Minimum Inhibitory concentration (MIC) is the highest dilution of extracts that inhibits microorganism growth without killing the organism. The treatment of plant extracts in tested plates from the disc diffusion method that exhibit an inhibition zone was tested for MIC. The clinical laboratory standards institute (CLSI) protocols were followed when using the broth macrodilution method (Jorgensen and Turnidge 2015).

Globally, the problem of Acinetobacter infections and drug resistance development is a major prevailing research issue that must be adequately addressed. Synthesizing biofilm is a key feature, particularly in bacterial diseases where its spread is aided by air and mechanics (Ming et al. 2014; Badave and Kulkarni 2015). In our study, we found a high prevalence of MDR strains among A. baumannii isolates from ICU patients. The high prevalence of MDR strains in ICUs could be attributed to the study population’s regular use of antimicrobials.

Isolation and identification: About seventy-eight swab samples were collected from different areas of the Hospital. From these swab samples about 112 bacterial strains were isolated. The list of sampling having pathogenic strain is detected is shown in Table 1.

Out of these bacterial strains, eight were identified as pathogenic bacteria using 16s rRNA sequences. All of these eight strains were derived from the Genus Acinetobacter. Among them, two strains of Acinetobacter were resistant to 15 different antibiotics. The resistant profile of all the pathogenic strains is shown in Table 2.

Table 2. Antibiotic profile of the isolates from local hospital 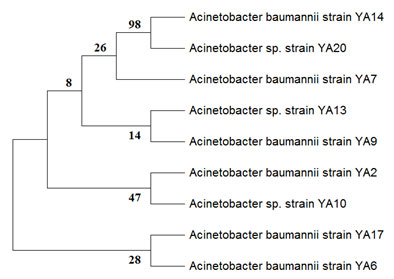 Antibacterial activity of plants extract: Plant Ethanolic extract was investigated to evaluate their antibacterial activity against the infectious bacteria isolated from local hospital. The extract’s antimicrobial activity was investigated to determine its efficacy against the two microorganisms being studied. Coleus forskohlii Ethanolic extract was quantitatively tested against two pathogenic Acinetobacter by assessing the diameter of the inhibition zones as shown in Table 3 and Figure 2. Extracts of Coleus forskohlii and had high activity against Acinetobacter. The results presented showed significant activity among (9.5±0.8 – 16.5 ±0.86) range against micro-organisms with inhibition zones. 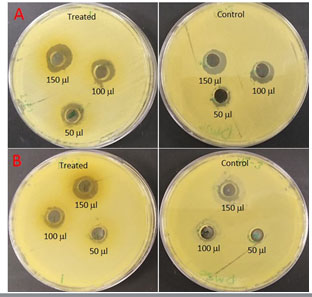 Minimum inhibitory concentration (MIC): Acinetobacter sp. and Acinetobacter baumannii were found to be most sensitive pathogens which survived up to 2 mg/ml and 4 mg/ml (Table 4), thus having an MIC of 2 mg/ml and 4 mg/ml, respectively. Acinetobacter baumannii was found to be comparatively less sensitive as they survived up to 4mg. Minimal bactericidal concentrations (MBC) results was found 16 mg/ml of Coleus forskohlii Ethanolic extract against the selected pathogenic strains. 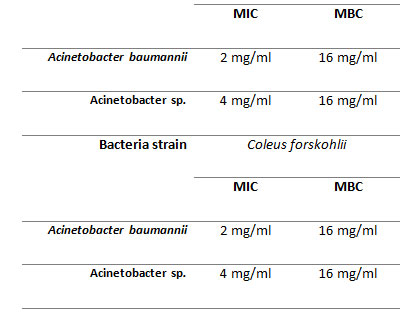 Furthermore, Lu et al. (2010) mentioned that Gallic acid have a strong antimicrobial, antioxidant and anticancer (Rice et al. 1996; Lu et al. 2010). p-hydroxybenzoic acid, has been reported to have antioxidant activity against free radicals, antimicrobial activity against pathogenic bacteria and fungi (Rice et al. 1996; Heleno et al. 2013; Mitra et al. 2020; Khatun 2020). Many researchers have identified various plant extract efficiency and active compounds as antimicrobial sources to inhibit the growth of bacteria (infectious). According to some reports, compounds found in plant extracts such as terpenes, alkaloids, and phenols affect the enzymes and proteins of the target cell membrane.

These plant compounds are responsible for cell disruption caused by proton efflux to the cell’s exterior causes cell senesces or disrupts enzymes required for amino acid biosynthesis (Burt 2004; Gill and Holley 2006). There are also some reports about the hydrophobicity of plant extracts. This property of extracts enables them to interact with microbial proteins in cell membranes and mitochondria, posing a threat to cell integrity and altering permeability (Friedman et al. 2004; Tiwari et al. 2009; Mitra et al. 2020; Khatun 2020).

The findings of the present study determines that the production of resistant strains of Acinetobacter causes hospitalizations to be prolonged, as well as high medication costs. Acinetobacter infection is significantly accelerated by factors such as improper antibiotic use, mechanical ventilation, and cross infection. There is already a high rate of resistance to common antibiotics. The Ethanolic extract of plants may play an important role in reducing Acinetobacter infections and inhibiting deadly epidemic nosocomial infections.

Handique, J.G. and Gogoi, D. (2016) Antioxidant activities of the medicinal plants used for preparation of fermentation cakes of “haanj”, the rice based alcoholic beverage of ahom community people of Assam, India. International Journal of Pharmacognosy and Phytochemical Research, 8: 217-222.