Present study is a first-time report of flathead Sillago, Sillaginopsis panijus (Hamilton, 1822), from Rupnarayan River of West Bengal. Seasonal sampling performed from January 2019- February 2020 by collection of water sample and fish sample in the morning time 5.00 A.M. – 8.00 A.M. A total of 116 specimens of Sillaginopsis panijus (Hamilton, 1822) were collected from four different sampling stations of Rupnarayan river (22.23°N 88.03°E to 22.40°N 87.36°E), West Bengal, India. Present work is a morphometric and meristic data analysis has been provided in detail. Total 23 morphometric characters and 13 meristic characters were analyzed. Morphological characteristics of the species were present to confirm the occurrence and distribution of Sillaginopsis panijus (Hamilton, 1822) along the riverine water of Rupnarayan.

The physico-chemical parameters of water have been measured such as temperature of water, dissolved oxygen, pH and salinity. The statistical analysis of multivariate test with post-Hoc analysis and correlation were established with the abundance of S. panijus (Hamilton, 1822) in relation to water parameters. The result shows the dissolved oxygen, temperature, pH and salinity played a most important role in the distribution of S. panijus (Hamilton, 1822). The result shows a statistically significant difference in distribution of fish species, F (12, 8) =18.86, p<0.0005; Wilk’s Λ=0.001, partial η2=0.966.

Present study certainly provides the baseline information of Sillaginopsis panijus (Hamilton, 1822) from the Rupnarayan river of West Bengal, India. This record of Sillaginopsis panijus (Hamilton, 1822) may assist the fishery scientist, researchers, policy planners and conservationists to develop sustainable fishery management. Therefore, this study was considered as a first step on morphometric characters for its development and documenting the extension of the distribution and ecological changes in its natural habitat which helps to conserve this species abundance in this area and prevent overexploitation.

The Sillaginopsis panijus which is a flathead sillago of the family Sillaginidae and order Perciformes is a migratory amphidromous fish found in the areas of Gangetic delta (Type locality), Pondicherry (Coromondoal coast), Bangladesh (Siddik et al. 2015), Burma-Malaysia and rarely to the Indonesia (Hamilton 1822; Hamilton- Buchanon 1822; Rayappa et al. 1962; Roper et al. 1984; Talwar and Jhingran 1991; Rahman 2005; Azim et al. 2012). This family is found widespread in the Indian ocean and western Pacific Ocean also. The sillaginids are easily identified with their uniformity of body shapes. The morphological identifications are considered the most common cost-effective tool in the characterisation of fish species (Cadrin and Silva 2005; Chaklader et al. 2015; Sidik et al. 2021).

S. panijus is an estuarine and inshore marine fish but adapted in the muddy substrate in shallow water and it migrates to the upper reaches of the tidal river for extending their habitat for breeding and in search of food (Hamilton 1822; Talwar and Jhingran 1991; Alam et al. 2007). The spawning of S. panijus (Hamilton, 1822) occurs twice in a year (probably August-September and November- February) and the juveniles migrate toward the upper region of the tidal river during the month of December and March-April (Talwar and Jhingran 1991; Liu et al. 2021).

It comes with a predatory habit and consumes small fish, planktonic crustaceans and algae. The morphometric and meristic study such as measuring of length, counting of fins and fin-rays, counting of scales and other parameters are important tools used for the proper identification of the species (Cavalcanti et al. 1999). Fish populations are highly dependent upon the physico-chemical parameters of the riverine water body, which supports the abundance of fish population and to perform their biological functions (Ali 1999).

Among all the physico-chemical factors salinity, pH, temperature and dissolved oxygen (DO) are the determinants and by their regular or irregular fluctuations a fish population is determined (Thirumala. et al. 2011). Literature survey reveals that a very little work has been done on the fish faunal diversity till date in the river Rupnaryan except the work done by Mishra et al. in (2003) and Ghorai et al. in (2015) and they have listed seventeen and thirty-eight number of species respectively. The present investigation reveals strong evidence that the existence of S. panijus, will certainly enrich the biodiversity data of the river Rupnarayan (Hamilton 1822; Chakraborty et al. 2021).

During present study a total of 116 specimens were collected seasonally by the help of the local fishermen, which captured in the early morning using trawl nets and gill nets from four different study sites of the Rupnarayan River namely Bandarghat (SI), Baksi (S2), Kolaghat (S3), and Gadiara (S4). After collection, photographs were taken for the fresh specimens and were preserved in a wide mouth jar having 4% formalin solution and brought to the laboratory of Raja N. L. Khan Women’s College (Autonomous) for further studies. A total of 27 individuals of various size ranges of S. panijus were studied morpho metrically and meristically. Twenty-three morphometric characters were measured by using a digital slide calipers scale with 0.1 cm accuracy (Hamilton 1822; Bagra and Das 2016).

Morphometric characteristics were studied by the help of existing literature like Talwer and Jhingran (1991); Jayaram (1999), Turan (1999), and the standard method followed after Hubbs and Lagler (1958) and Hubbs and Lagler (2016). Statistical analysis has done by using correlation matrix, multivariate tests, the test of between-subjects effects, multiple comparisons with Tukey HSD test method were performed to established the significant variation among the water parameters (pH, DO, Temparature, Salinity) with occurrence of fish species population seasonally in different four sampling stations (Gonzalez 2013; Nanda et al. 2021).

The fresh fish have a shiny reddish silver colour in the anterior part and whitish silver colour in the abdomen (Fig.1). Fins are pale brownish with black dusting spots. The body shape is elongated and sub cylindrical with a greatly depressed head with scale. Mouth is small and terminal with villiform feeble teeth. Eyes are laterally present, slightly upwards with fleshy orbits. Body covered with small ctenoid scales, lateral line with 91 to 93 scales. Presence of two well separated dorsal fins with ten fin rays in first dorsal fin in where second dorsal spine of first dorsal fin is very elongated and extended to the caudal fin and second dorsal fin with 26-27 fin rays. The paired pectoral fin with 19 to 22 fin rays and the anal fin with two spine and 25 to 27 soft finrays. The caudal fin with 18 to 20 fin rays. Opercle with a well-developed spine.

The descriptive data of 23 morphometric characters of 27 identified samples of S. panijus comprised the range of minimum and maximum value, mean value, standard deviation and standard error of each of the characteristics presented in Table 2 and thirteen meristic counts of identified specimens are enlisted in table 1. The morpho-meristic characters differ in the same species due to environmental conditions of different geographical areas  (Hamilton 1822; Franičević et al. 2005).

The estimated marginal means of dissolved oxygen (DO) represented in (Fig.2 C) low level in pre-monsoon and in post-monsoon it was higher than the monsoon period. Dissolve oxygen (DO) is one of the most important parameters which reflects the physical and biological processes of water (Kibria 2017). The average concentration of DO in the water body varied 3.0- 5.6 during the study time. The minimum DO was recorded in the post monsoon season in S1 and maximum in S3 station. The individuals of S. panijus were established in a larger number in monsoon season than post-monsoon and a very few in pre-monsoon season (Fig.2 D).

(2017), that fish always seek better environmental conditions and they extended their habitat and geographical location due to environmental changes which depends on variable environmental parameters, as a result the species distributed in new areas far from their natural habitat (Hamilton 1822; Hanif et al. 2017; Cheung et al. 2018). The different parameters in an optimum level control the water quality which helps the proper growth of aquatic life (Roy et al. 2021). Several studies on different rivers in India were conducted and portrayed the deterioration of the water body and depletion of valuable aquatic life in its natural habitat (Roy and Shamim 2020a; Rahman 2021).

Figure 2: (A-E): Shows the graphical representation of the relation with pH, temperature, DO, specimen no and salinity in respect to the season of Sillaginopsis panijus (Hamilton, 1822) from Rupnarayan river, West Bengal. 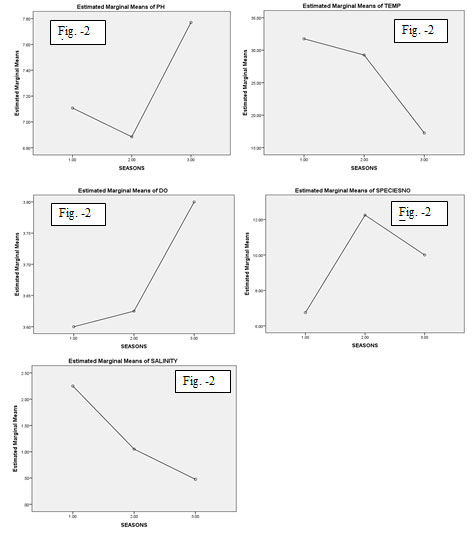 The findings of the present study ensure the presence of Sillaginopsis panijus as a first-time record ever in the upstream and downstream of the Rupnarayan river of West Bengal, India. Present morphometric study describes thorough and vivid comparison among individuals in a species qualitatively. It provides the basic information for fishery management and research. The S. panijus population size is found larger in monsoon than post-monsoon and smaller in pre-monsoon season. This seasonal and morphometric study could be used as primary information in the near future in fish research and management.

This study was not financially supported by any other funding agency. Authors are also thankful to Principal, Raja Narendra Lal Khan Women’s College (Autonomous) and Head of the Department of Zoology, for providing laboratory facilities and support during the study periods. Authors are grateful to anonymous reviewers and editors for their valuable suggestions and feedback.

Hamilton, F., (1822). An account of the fishes found in the river Ganges and its branches. Archibald Constable, 1.

Roper, C.F., Sweeney, M.J. and Nauen, C., (1984). Cephalopods of the world. An annotated and illustrated catalogue of species of interest to fisheries.

Roy, M., and Shamim, F. (2020a). Assessment of antropogenically induced pollution in the surface water of River Ganga: A study in the Dhakhineswar Ghat, W.B, India. Journal of Water Pollution & Purification Research, 7(1), 15–19.