Naringinase is an omnipotent enzyme found in animals, plants, and microorganisms. Subsequently, naringinase is increasingly getting recognition in industrial application, particularly, in debittering technology of citrus fruit juices. The other industrial sectors considered a potential user of naringinase are antibiotic preparation, wine enhancement, preparation of rhamnose, hydrolysis of glycoside, and biotransformation. Biochemically, naringinase is a multi-complex enzyme, in general, is an enzyme that catalyzes the hydrolysis of α-rhamnose and β-glucose. In addition to this, naringinase can also outnumber other natural glycosides. This natural compound is receiving increasing attention because it carries major potential for application in food and pharmaceutical industries. However, in near future, the growing multifold potential of naringinase application is expected to trigger its share to reach a leading position. The microbial naringinase getting popularity among researchers for its availability, easy handling, multifold property, and abundant supply. In nature, naringinase is obtained from different origins promoting variation in reaction specificity, thus making it a versatile and interesting element of study.

Naringin is a flavanone glycoside, a type of flavonoid. It is glycosylated by a disaccharide at position seven to give a flavanone glycoside. Since naringin and limonin is the principal bitter component of citrus juice, thus, its hydrolysis with a concomitant decreases the bitterness becoming of great industrial importance (Luo et al. 2019). Presently maximum production goes to the fresh fruit market. It is notable that due to poor post-harvest infrastructure, wastage of citrus fruits is around 25-30% and that only a small percentage of the total production is processed due to its problem of bitterness (Sharma et al. 2021).

To control juice quality and improved commercial market value of the citrus juices, namely of grapefruit, maintaining their health properties and increasing consumer acceptance, the reduction of naringin concentration by naringinase hydrolysis is one promising technique having wide industrial application (Gudimella et al. 2021). Limitations of physicochemical technology can be overcomed by introducing the biotechnological methods in fruit juice processing by using naringinase or using whole microbial cells with the ability to produce naringinase as a debittering enzyme, was used in the industrial production of citrus juice (Yu et al. 2021). 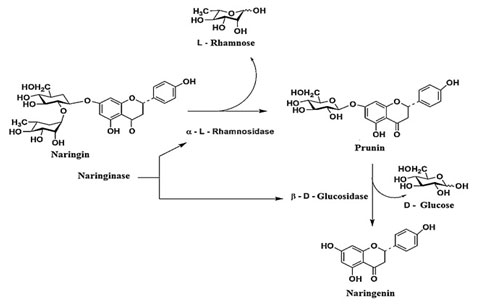 Biochemically, the naringin of certain fruits has sugar complexes (a-L-rhamnose and b-D-glucose) and an aglycone (Naringenin) part. The b-D-glucosidase (EC.3.2.1.23) and a-L- rhamnosidase (EC.3.2.1.40) are collectively known as Naringinase (Beekwilder et al. 2009). The enzyme a-L- rhamnosidase acts on the sugar complex, release prunin, and rhamnose whereas the b-D-glucosidase acts on prunin to release naringenin and glucose (Carqueijeiro et al. 2021).

Naringinase acts on many other natural glucosidases which include hesperidin, diosmin, quercitrin, rutin, naringin, and terphenyl glycosides (Zheng et al. 2021). These substrates have potential chemicals with important properties in the fields of healthcare, food, and agriculture as they are recognized as antioxidant, anti-inflammatory, anti-ulcer, neuroprotective, hypocholesterolemic effects (Torabizadeh et al. 2018; Wang et al. 2021). Microbes are mainly exploited in the industry for naringinase enzyme production. Furthermore, naringinase enzymes are supplied well standardized and market by several competing companies worldwide in recent time (Sheldon et al. 2021). This review focuses on the microbial origin of the naringinase enzyme and its applications.

Microbial Origin of Naringinase Enzymes: A considerable amount of work has been reported from across the globe in the isolation, and purification of naringinase enzymes from different sources of nature. Different microbial sources reported for the naringinase production have been listed in Table 1.

This enzyme has existence in nature and has sources from animal tissues, bacteria, fungi, yeasts, and plants (Yadav et al. 2021). However, for the source of availability, the only process based on microbial naringinase is practicable. There are several reports on the microbial production of naringinase and several production methods from them have been patented, (Puri 2010). Although microorganisms have been reported as the main sources for naringinase enzyme production, these enzymes were first found from a plant source as the first naringinase enzyme was isolated from celery seeds (Hall 1938; Yadav et al. 2021).

Amena et al. (2015), reported the purification and characterization of naringinase from Micrococcus sp. (Amena et al. 2015). Zhu et al. (2017b) reported the naringinase from a Bacillus amyloliquefaciens 11568 (Zhu et al. 2017b). They have identified, purified, and characterized the enzyme and the purified enzyme molecular weight was found 32 kDa. Tran et al. (2020) carried out a detailed study on four probiotic bacteria strains in which Lactobacillus and Bifidobacterium naringinase gave the maximum production from grapefruit juice fermentation (Tran et al. 2020).

Besides this, only a little literature was found on naringinase production from yeast strains. Ni et al. (2011), reported the naringinase enzyme production from Williopsis californica Jmudeb007 (Ni et al. 2011). Borzova et al. (2017) studied the purification and characterization of naringinase enzyme from Cryptococcus albidusa by Ammonium sulfate fractionation and chromatography. Here, the enzyme had a purified molecular mass of 50kDa. and had an optimum pH at 5.0 as well as temperature of 600C respectively (Borzova et al. 2017; Tran et al. 2020).

Naringinase enzyme is a multi-complex enzyme, in general, is the one that catalyzes the hydrolysis of α-rhamnose and β-glucose. In addition to it, naringinase can also number other glycosides. One unique catalytic property of the naringinase, namely, steroids biotransformation, hydrolysis of glycosidase, renders it to catalyze the reaction in aqueous as well as in the non-aqueous environments. This property of the naringinase ascribes their ability to utilize a wide spectrum of substances, thus increasing the scope of exploiting their specificities in various reactions having importance in pharmaceutical, food, and many other industrial sectors. The industrial demands of naringinase having high catalytic specificities continue to stimulate the search for new enzyme sources. Most of the commercial naringinase are of fungal origins. However, the focus on bacterial and yeast has recently been laid due to their high stability, multifold properties, and abundant supply.

Conflict of Interests: The authors had no conflict among their interests while researching and preparing this manuscript.

Borzova N, Gudzenko O and Varbanets L (2018) Purification and Characterization of a Naringinase from Cryptococcus albidus. Applied biochemistry and biotechnology, 184(3): 53-969.

Puri M and Kalra S (2005) Purification and characterization of naringinase from a newly isolated strain of Aspergillus niger 1344 for the transformation of flavonoids. World Journal of Microbiology and Biotechnology, 21(5): 753-758.

Puri M, Banerjee A and Banerjee UC (2005) Optimization of process parameters for the production of naringinase by Aspergillus niger MTCC 1344. Process Biochemistry, 40(1): 95-201.

Tsen HY and Tsai SY (1988) Comparison of the kinetics and factors affecting the stabilities of chitin-immobilized naringinases from two fungal sources. Journal of Fermentation Technology, 66(2): 193-198.

Wang D, Zheng P, Chen P and Wu D (2021) Immobilization of alpha-L-rhamnosidase on a magnetic metal-organic framework to effectively improve its reusability in the hydrolysis of rutin. Bioresource Technology, (323): 124611.