Round scad, a type of sea food naturally has a disadvantage of the fishy smell, which unfavorably affects the sensory quality. In this study, the sensory parameter, trimethylamine (TMA) indicator, and amino acid values were evaluated in various methods during fishy-smell removal from round scads (Decapterus maruadsi) as the material for bouillon cube production. Salt, lactic acid, and ethanol in different concentrations were used as deodorizing agents for the material round scads. Round scad hydrolysate was prepared by using tea (1%), ethanol (1%), and activated charcoal (1.5%). Besides, Lactobacillus plantarum, Saccharomyces cerevisiae were also used for the preparation. The different deodorizing methods provided distinctive results. Deodorization was most effective when raw materials were pretreated with 0.03% acetic acid and 0.1% salt and followed by fermentation of  scad  hydrolysates with L. plantarum (1%, v/v) for 12 hours. The treated hydrolysate had a sweet taste, light brownish yellow color, and no fishy odor remaining. The lowest TMA obtained analysis was 3.05 ± 0.38 mg/100g, and the highest amino acid was 13.76 ± 0.3 g/l.

Round scads (Decapterus maruadsi) is a species of oceanic fish in the family Carangidae. Round scads are economically valuable and a common harvested resource in the world. Round scads have high nutritional value, containing an average protein value of 18-20%, lipid 0.5-0.8%, ashes 1.3-1.5%, mineral 58-246 mg/100g (including Ca, P, Fe, K…), and various kinds of vitamins such as A, B1, B2, and C (Nguyen, 2011).Round scads, like other kinds of seafood, had a fishy odor, generally caused by NH3, TMA, TMAO, indol, and skatol (Deke et al., 2016). The smell severely affects the sensory characteristics, thereby reducing the market value and the commercializing of value-added products made of round scad, such as hydrolysate powders. There were various studies worldwide to deodorize the fishy smells by physical, chemical, or biological factors, such as activated charcoal, polyphenol in tea, acetic acid, ethanol or yeasts and bacteria (Saccharomyces cerevisiae, Lactobacillus plantarum, L. bulgaricus, and Streptococcus thermophilus). The absorbent of activated charcoals helps effectively eliminate the volatile aldehydes and ketone.

Tea reduces the relative aldehyde values significantly while increases the akan, as well as adequately inhibit the formation of trimethylamine (TMA) in the hydrolysates (Deke et al., 2016). Ethanol, methyl, and ethyl alcohol, or ethyl acetate are among the productive deodorizers for fish and oysters (Cuellar et al., 2017; Galliver and Holmes, 1957; Levin, 1961). Some authors reported the effect of acetic acid in deodorizing such as Bui (2013), Nguyen (2000a), Nguyen (2000b), Nguyen and Nguyen (2017).Deke et al. (2016), in a study, pointed out that the yeast S. cerevisiae deodorized by increasing the relative contents of aromatic compounds and decreasing the relative contents of aldehydes and ketone. Fermentation with the bacteria L. plantarum was also reported to be effective in improving the smell and taste of fish and oysters’ hydrolysates (Lee et al., 2016; Pan et al., 2018).

However, there has not yet been a study to deodorize round scad to produce hydrolysate powder. Without the odor treatment, the smelling factors remaining in the raw material would reduce the sensory characteristics of the protein hydrolysate powder product. Deodorizing is an essential step to overcome the disadvantage of the material and optimize the quality of the final product. Therefore, we conducted this study to investigate the deodorization of  round scads for producing fish protein hydrolysates.

Materials for the research: Round scad: The raw round scad materials (Decapterus maruadsi) were purchased in May-Chai fish port, Hai Phong province. The materials had the particular fishy smell, were fresh, sheen, intact, in the size of 12-14 fish per kg, and 14-15cm long per fish. The materials were cleaned, packed in 0.8-1.0 kg plastic packages, and stored at -20 ± 20C in the lab. Ingredients and spices used in the study, such as salt, acetic acid, ethanol, were conformed to the standards of ingredients for food production No. 02/VBHN-BYT from the Ministry of Health. 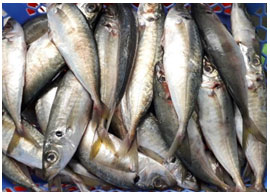 Experiments for deodorizing during hydrolysis: Preprocessed round scads were minced and hydrolyzed using protease. The deodorization was tested with five different factors including dried tea (1% w/w), ethanol (1% w/w), activated charcoal (1.5% w/w), the bacteria Lactobacillus plantarum (1% v/w), and the yeast Saccharomyces cerevisiae (1.5% v/w). The effects of the deodorization were evaluated by sensory assessment (smell, color, state), amino acid nitrogen (Naa), and TMA values of the hydrolysates.

The sensory assessment results after preprocessing the round scad raw materials with different salt concentration solutions is presented in Table 3.

The results showed that salt preprocessing provided better sensory assessment scores while not causing noticeable changes in Naa. The best sensory quality was obtained in the formulas from 1% salt and above. However, apparent fishy smells were remaining in all concentrations, which were suggested by the results of the TMA value. TMA results were not significantly reduced compared to the control sample (10.56 mg/100g as opposed to the lowest value among formulas, 10.077mg/100g). There was no statistically significant difference among salt concentrations (p>0.05) (Figure 2).Therefore, 1% of salt concentration to be the suitable for preprocessing round scad raw material.

Determining the concentration of acetic acid in preprocessing round scad materials: The sensory assessment results of different acetic acid concentrations are presented in Table 4 and the corresponding TMA and Naa values in Figure 3.

Therefore, a suitable acetic acid concentration for round scad material processing to be 0.03%. Although using acetic acid could reduce the fishy smell, there were still slimes on the surface of the materials. Therefore, it was necessary to combine with salt to gain maximum effectiveness.

Determining the concentration of ethanol in preprocessing round scad materials:The sensory assessment results of different ethanol concentrations are shown in Table 5 and the corresponding TMA and Naa values in Figure 4.

The different ethanol concentrations provided mixed results. Although there was no divergence in the sensory assessment among formulas, when the level of ethanol increased, the TMA and Naa values fell. The highest effective concentration was 2% ethanol, by which the TMA value was 9.983 mg/100g, and Naa had no significant reduction compared to the control (p>0.05). However, all formulas showed ineffective results as the smell remained clear (Figure 4).In all three experimented methods, round scad preprocessing with acetic acid 0.03% provided the highest results. Therefore, using a combination of acetic acid 0.03% and salt 1% for preprocessing the scad material.

Deodorizing during round scad hydrolysis:The sensory scores from the various methods provided divergent results, as presented in Table 6 and the corresponding TMA and Naa values in Figure 5.

All methods showed some deodorizing abilities to the hydrolysate with statistically different TMA values (p<0.05). The TMA values in the activated charcoal, ethanol, and yeast methods were reduced 25-30% from the control sample, in the range of 8-9mg/100g. The tea treatment method provided a strong deodorization with a TMA value of 5.01 mg/100g. The fermentation with Lactobacillus plantarum in 12 hours resulted in the highest effectiveness, which totally excluded the fishy smell and gave the lowest TMA value of 3.05 mg/100g, four-fold reduced from the control. The method also brought the obtained amino acid value to 13.76g/l compared to 12.55g/l from the control sample. In contrast, other methods showed no statistically meaningful effect on amino acid value (p<0.05), except for activated charcoal and ethanol, which lowered amino acid levels in the hydrolysate to 11.29 and 12.09 g/l, respectively (Figure 5).

In the hydrolysate production process, material preprocessing plays an essential role as it not only cleans any unfavorable substances potentially reduces the product quality but also eliminates odor and brightens the resulting hydrolysates. The basis of the deodorization is the reactions that change the nitrogen in the smell causing substances, therefore, decrease or eliminate their odors (Doyle and Glass, 2010).Adding salt into the cleaning solution helps eliminate slimes, smelling substances, and neutralize impurities. The Cl- ions in salt solution attach to and inactivate the proteases on the surface of materials, thus inhibiting the spoilages that cause odors (Doyle and Glass, 2010).

The smelling factors in seafood typically have weak alkalic nature such as NH3, TMA, TMAO, indol, skatol; therefore, weak organic acids can be used to neutralize these substances and change them to salt compounds, so that can reduce or exclude the smell. Acid solutions also eliminate bacteria that cause smelling. Among organic acids, acetic acid is an economical and accessible de-colorant and deodorant, effective even in a small concentration, and does not create any unfavorable effect on human health (Bui et al., 2003; Nguyen and Nguyen, 2017). In acidic treatment, TMA was neutralized as following:

In our study, we decided that combining salt solution (1%) and acetic acid (0.03%) provided the optimal effect in deodorizing and eliminating the slime on the surface of the materials. Galliver and Holmes (1957) suggested to effectively deodorize fish meat using alcohol. Levin (1961) also proposed the method of fish products deodorizing using methyl and methyl alcohol, or ethyl acetate. To eliminate the fishy smell of algae, Cuellar et al. (2017) used ethanol. However, in our study, ethanol was not as effective as acetic acid, and was not chosen.

Deke et al. (2016) studied the effect of activated charcoal, yeast extract, and polyphenol in tea on Paphia undulata hydrolysate. The results showed that tea was the most effective, with TMA as low as 3mg/100g. The highest TMA was when using yeast extract (around 9 mg/100g). Feng (2009) used activated charcoal to deodorize oyster hydrolysates. In his study of sardine oil deodorization, Chakraborty et al. (2014) used activated charcoal 1.25-3.75% in 40 minutes with high efficiency. The activated charcoal with a hollow and porous structure that can easily absorb and contain gases, liquids, oxidizing compounds and volatile organic molecule (Pan et al., 2018), effectively removing the volatile aldehyde and ketone.

Yeast changes the structure of the smell by increasing the aromatic compounds and decreasing the relative level of aldehyde and ketone. Tea effectively reduces the relative amount of aldehyde while increasing alkan and inhibiting the formation of trimethylamine (TMA) in the hydrolysate. Cheng Suiyang et al. (2015) also eliminated the smell in the protein hydrolysate is added with 0.05-0.2% by mass of black tea 0.5-1.0% by mass of garlic and 0.1-0.5% by mass chrysanthemum and and the mixture is heated at a temperature of 70-100oC for 30-80 minutes.

L. plantarum is normally used in food fermentation that not only increases the nutrition value but also creates aroma in the fermentation products. L. plantarum and S. cerevisiae fermentation has been reported to be improve the smell and increase the taste of fish hydrolysate (Pan et al., 2018). Yang Pinhong (2008) excluded the fishy smell in clam protein hydrolysate by fermenting with two strains of bacteria Streptococcus thermophilus and L. bulgaricus. Lee et al. (2016), in this study on claim protein hydrolysate, pointed out that fermentation with S. cerevisiae can noticeably reduce the smell.  There was an agreement in the results in this study with other authors (Lee et al., 2016; Pan et al., 2018), that the highest effective deodorizing methods were using tea and bacterial fermentation with Lactobacillus plantarum, in which bacterial fermentation provided the highest results and furthermore yielded more amino acid than other methods.

The different deodorizing methods provided distinctive results. The most effective procedure was using acetic acid 0.03% in combination with salt solution 1% to preprocess round scad materials and then fermented with the bacteria L. plantarum 1% in the round scad hydrolysis in 12 hours. The treated hydrolysate had no smell remaining, sweet taste, light golden brown color, the lowest TMA level (3.05 ± 0.38 mg/100g) and the highest amino acid level (13.76 ± 0.3 g/l).

The authors would like to thank the Vietnamese Ministry of Agriculture and Rural Development and the project of “Pilot scale production of nutritional seasoning powder from protein hydrolysates of scad and shrimp” (HĐ 04/2019/HĐ-TS-CNSH) for providing facility and financial support.

Nguyen T. T., (2000b). Production of surimi from Hypophthalmichthys harmandi in the form of sausage. Master dissertation. Nha Trang University. 2000b. (in Vietnamese).