Isolation and Characterization of Pseudomonas sp. strain and its Role As Oviposition Attractant of the Filarial Vector Culex quinquefasciatus

The coastal regions of Digha, West Bengal are endemic for lymphatic filariasis, especially Culex quinquefasciatus which is an established filarial vector there. Microorganisms in mosquito breeding sites is the key factor of either attraction or repellence of filarial vectors. The bacterial strains isolated from mosquito breeding sites were studied in this investigation. Culex quinquefasciatus plays a major role in transmitting lymphatic filariasis in the village areas of Digha, West Bengal. Water samples were collected from selected breeding habitats of Culex quinquefasciatus at the coastal villages of Digha. Five isolates (DX1, DX2, DX3, DX4 and DX5) were screened from the breeding habitats of Cx. quinquifasciatus, characterized and examined for oviposition bioassay. Test cup with the pure culture of Pseudomanas sp. DX5 was comparatively more attracted by gravid female Culex mosquitoes than other isolates in relation to oviposition.

Oviposition Activity Index (OAI) was 0.8. Phenotypic, biochemical and molecular characterization of Pseudomonas sp. DX5 was done. Pseudomanas sp. DX5 showed negativity to Gram stain. Organisms looked like rods without having any spores. The colonies were spherical, opaque, yellowish in colour. The strain was positive for catalase, oxidase, urease, H2S production and negative for indole production, methyl red and voges-proskauer test, citrate utilization and nitrate reduction test. It was sensitive to some standard antibiotics like levofloxacin, ofloxacin, ciprofloxacin, streptomycin and doxycycline but resistant against kanamycin, amoxycillin, nalidixic acid, ampicillin, chloramphenicol, gentamicin, tetracycline, vancomycin and erythromycin. Thus, elimination or control of the oviposition attractant bacterial strain of Pseudomanas sp. from breeding habitat water of filarial vector Cx. quinquifasciatus is an alternative strategy for filariasis management which is also a suitable topic of research in future.

Chatterjee S, Mandal A, Bag S, Sarkar B, Bhaduri R, Saha N.C . Isolation and Characterization of Pseudomonas sp. strain and its role as Oviposition Attractant of the filarial vector Culex quinquefasciatus. Biosc.Biotech.Res.Comm. 2021;14(2). Available from: <a href=”https://bit.ly/2R4zQk9“>https://bit.ly/2R4zQk9</a>

Mosquitoes can interact with microbes in the breeding habitat water bodies in a variety of ways: as being the food items for the larvae, as being the symbionts, or as makers of kairomones (Merritt et al. 1992; Moreira et al. 2009; Shelomi 2019). Volatile compounds have been known to be associated with some specific bacterial strains that can enhance mosquito oviposition in the breeding sites of filarial vectors (Why and Walton 2020). Scanty literature is available in relation to the present theme of this study. Present study has been designed to isolate and characterize the oviposition attractant bacterial strains from the mosquito breeding habitats at the coastal regions of Digha, West Bengal.

Gram-staining of the isolates was done and cell morphology were checked under a Phase-Contrast Microscope. The surface topology of the bacteria was studied under Scanning Electron Microscope at various magnifications following standard protocols (Lacey 1997). Smears of the pure culture of the isolates were done on cover glasses and heat fixed for 1-2 sec. The smears were then fixed for 45 min in 2.5% glutaraldehyde solution.

The slides were then dehydrated by passing through 50%, 70% and 90% ethanol and finally with absolute alcohol for 10 min each. The samples were gold coated, scanned and photographed under Scanning Electron Microscope (ZEISS). In order to study the biochemical properties of the isolate, catalase test, indole test, methyl red test, voges-proskauer test, nitrate reduction test, citrate utilization test, urease test, oxidase test was performed following standard methodologies (Smibert and Krieg 1995; McClung 1985).

Pure culture of bacterial isolate (DX5) was inoculated in sterilized Nutrient Broth medium and incubated in a B.O.D. shaker incubator for 24h at 37 ± 2°C.  Liquid bacterial culture of 1.8 mL of was centrifuged for 30 sec at 10000g to get the pellets and the genomic DNA was extracted by using DNeasy Ultra Clean Microbial Kit (Qiagen) following manufacturer`s instructions. Then amplification of nearly ~1.5 kb rDNA fragment of bacterial genomic DNA was extracted by using 27F forward and 1492R primer by polymerase chain reaction (PCR) technique (Brown and Izundu 2004).

Sequences of purified PCR products were obtained through universal bacterial primers in a DNA sequences. External service was taken for this purpose. Sequenced data were aligned in ClustalW software. As per the research by Jukes et al. (1969), evolutionary distances were calculated. Phylogenetic tree was built following standard method (Tamura et al. 2007). Larvae of Culex quinquefasciatus were collected from the breeding habitats in the coastal areas of Digha and the mosquito colonies were maintained at the Microbiology and Parasitology Research Laboratory, The University of Burdwan.

The pure cultured bacterial isolates were discretely added to 100 ml Nutrient Broth and incubated at 30±1ºC for 72 hrs in a B.O.D shaker incubator to obtain a density of 105 cfu /ml. Sterilized Nutrient Broth media without-having any bacterial inoculum was taken as control. Ten adult gravid female Culex quinquefasciatus mosquitoes were released in each rearing cage (30cm x 30cm x 30cm). They were given two options for laying eggs. First cup was filled with 95 ml of sterile distilled water to which 5 ml (105 cfu/ml) of bacterial suspension was added.

The second cup filled with 100 ml of sterile distilled water without having any bacterial suspension served as the control. Separate set of experiment were conducted for each and every bacterial isolate. Ten replications were made for each treatment, using a fresh female Cx. quinquefasciatus for each treatment. Oviposition Activity Index (OAI) was determined by the formula: OAI = (Nt – Nc) / (Nt + Nc) [Nt= number of eggs laid in test cups; Nc = number of eggs in control cups] (Kramer and Mulla 1979). The entire experimental set-up was maintained in an environmental chamber at a temperature of 28±2ºC and relative humidity of 80±5% under 12:12h (light: dark) photoperiod (Kramer and Mulla 1979; Tamura et al. 2007).

Table 1. Number of eggs laid in test cups and control cups and Ovipositional Activity Index (OAI) in response to the suspensions of bacterial isolates.

Gravid mosquitoes showed comparatively higher oviposition attractancy to the test cup having Pseudomanas sp. DX5 than other isolates. Oviposition Activity Index (OAI) was 0.8. The bacterial colonies of the isolate DX5 were spherical, opaque, yellowish in colour in Nutrient Agar. Bluish green coloured colony was developed in Pseudomonas Isolation Agar. The bacterial isolate DX5 was rod shaped without having any spore (Table 2). 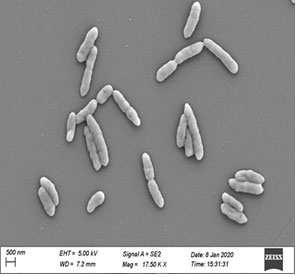 The16S rRNA partial gene sequence of the bacterial isolate DX5 has been submitted in the NCBI GenBank with an accession number assigned as MW513479. Nucleotide base composition (mol%) has been depicted in (Fig 1).

The values of AT content and GC content of the bacterial isolate DX5 were 46.92% and 53.08% respectively (Fig 1). Fingerprint of 16S rRNA partial gene sequence of Pseudomanas sp. DX5 has been depicted in (Fig 2). 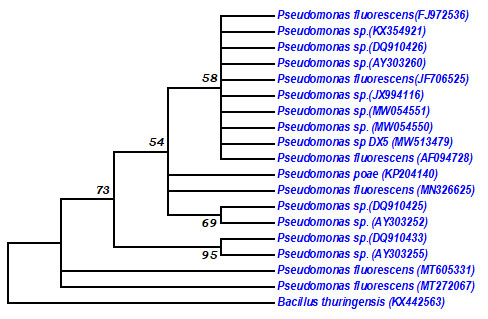 Recent observations reported by various workers have revealed that some bacterial strains could act as larval food, midgut flora, and its metabolites as important oviposition attractants and/or stimulants in mosquitoes. There are two key reasons for oviposition behaviour of a female mosquitoes. Gravid female mosquitoes must be induced for oviposition-by-oviposition media having specific bacterial suspension and also by some chemical inducers (Dethier et al. 1960). Oviposition attractancy depends on the composition and concentration of the microbial organisms found in breeding habitat water (Godwin et al. 2021).

Some strains of Acetobacter, Pseudomonas, Klebsiella, Gluconobacter, and Enterobacter spp. isolated from the insect orders Isoptera, Homoptera, Heteroptera, Coleoptera, Hymenoptera, and Diptera had important roles in larval development (Trexler et al. 2003; Roy et al. 2010). Microorganisms are responsible for the decomposition of detritus and release of volatile secondary metabolites. Gravid female Cx. quinquefasciatus mosquitoes were attracted to such habitats and were stimulated to lay eggs and Pseudomonas spp.

The current study clearly showed that the  strain of Pseudomonas sp. had a high oviposition attractancy index in relation to the oviposition of filarial vectors in the breeding habitats occurring at the coastal areas of Digha. Biocontrol or environmental management of the oviposition attractant bacterial strains in the mosquito breeding habitats of the coastal areas of Digha, West Bengal would be considered as an alternative strategy of vector control.

The authors are grateful to Department of Science and Technology and Biotechnology, Government of West Bengal for financial assistance for this work.

Conflict of Interests There was no conflict among the interests of the participating authors.

Ikeshoji, T. (1968). Studies on Mosquito Attractants and Stimulants : V. Gas-Chromatographic Separation of the Attractants for Oviposition of Culex pipiens fatigans from the Field Water. Applied Entomology and Zoology, 3: 176-188.