Subbaraju A and R Onkarappa*

Department of Studies and Research in Microbiology, Sahyadri Science College,

Microbial alkaline proteases are among the salient hydrolytic enzyme and used extensively as biocatalysts, Extracellular alkaline protease is of great importance due to its applications in detergent, food and leather industries by the prokaryotic actinomycetes. The present investigations were focusing on soil actinomycetes. Screening for alkaline protease and characterization of specific strain from rhizosphere soil from Western Ghats of Karnataka, India. The zones of hydrolysis were observed on skim milk agar medium under pH 10.0 at 30±02 0C for 5 to 7 days and produced 96 U/mL of alkaline protease by the fermentation. Morphological and biochemical characterization of the isolate was carried out and found that the isolate belongs to the Streptomyces genus. Further species confirmation of the Streptomyces was done by 16S rRNA gene sequencing. The obtained nucleotide sequences SO-13 were submitted to the GenBank database and the accession number assigned is MW130237. The results reveal the isolate SO-13 was identified as Streptomyces tendae. The  present data reveal that the isolate SO-13 represents Streptomyces tendae. The potentiality of the eco-friendly enzyme could be used for various industrial applications. The alkaline protease production from Streptomyces tendae SO-13 is the potent strain for commercial use. Further investigation at the commercial level and novel applications of alkaline proteases to be carried out.

The Western Ghats of India has been considered as one of thirty-four biodiversity hot spots in the world, with rich flora and fauna. The Western Ghats of Karnataka popularly known as Sahyadri hills are treasure houses of endangered species but less studied concerning microbial biodiversity. Actinomycetes are widely distributed in soil, and constitute a significant part of soil microflora (Bawazir and Manjula 2018). Soil actinomycetes are prokaryotes with various metabolic activities (Chavan et al., 2013). Actinomycetes are gram-positive, filamentous, bacteria, characterized by the formation of aerial mycelium, and spores on solid media, with DNA high in G+C content of 60-70 mol% (Shirling and Gottlieb 1966; Subbaraju and Onkarappa 2018).

Among the microorganisms, actinomycetes acquire special importance as the power source of antibiotics and, other bioactive primary and secondary metabolites such as enzymes (Chavan et al., 2013). Sources of commercial enzymes cover a wide range from microorganisms then animals and plants sources. Fungi and yeast contribute about 50%, bacteria 25%, animal 8% and plant 4% of the total in commercial enzymes production (Azmi et al., 1999). Proteases of neutrophilic as well as alkaliphilic bacterial and fungal origins are utilized for commercial exploitation (Pathak and Rothad 2018). Several microbial species are reported for the alkaline protease productions. The most copiously studied the alkaline protease producers among bacteria are the genera of Bacillus (Keshavamurthy et al., 2018) and Pseudomonas (Alexander et al., 2012), Streptomyces species (Sarkar and Suthindhiran 2020).

Alkaline proteases are also utilized for therapeutic agent’s development. The oral administration of proteases from Aspergillus oryzae to aid in digestion and rectify lytic enzyme deficiency syndromes is already in practice (Mikawlrang, 2016).More recently, actinomycetes are an auspicious source of a wide range of important enzymes. Streptomyces protease preparations that are profit-oriented used include FRADIASE 7M (S. fradiae) and PRONASE 7M (S. griseus). While alkaline proteases from bacteria are vastly characterized, similar attention has not been paid to actinobacteria. Currently, antibiotics are the major bioactive compounds from the actinobacteria. However, in these prokaryotes, the ability to produce a variety of enzymes may be an attractive phenomenon (Govindharaj et al., 2016). In the present investigation, the new isolate SO-13 capable of producing the alkaline protease. The study includes morphological, biochemical and molecular identifications.

Characterization of potent alkaline producing isolate SO-13:The classifications of actinomycetes were originally based upon the morphological observations. Preferably, the Streptomyces species were identified and recorded using the Bergey’s Manual of Systematic Bacteriology. Primarily, the characterizations of actinomycetes isolates were done by their colony morphology, spore colour, aerial mass colour and substrate mycelium, pigmentation appearance on the medium. The isolate was subjected to grams and acid-fast staining procedures. The isolate was identified to genus level based on their spore chain arrangement by coverslip technique and spore surface ornamentation by SEM analysis (Gautham et al., 2012).

To stop reaction 3ml of 10% (w/v) trichloroacetic acid and the mixture was centrifuged at 5000 rpm for 10 min. The supernatant, 5 ml 0.5M Na2CO3 solution and 0.5ml of two Folin Ciocalteau reagent was added and mixed thoroughly, incubated for 30 min at room temperature in dark condition. The optical density of blue colouration was measured using the UV-VIS spectrophotometer at 660 nm and the blank (Keshavamurthy et al., 2018). The amount of the released amino acids was calculated using the tyrosine standard. One unit of enzyme activity represents the amount of the enzyme required to release 1μg of tyrosine per ml per min (Pant et al., 2015).

Fifteen rhizosphere soil samples were collected in sterile Zip lock plastic cover from at different Latitude and longitude of the Western Ghats in Karnataka, India (Figure 1) and air-dried soil samples were subject to isolation and based on the zone of hydrolysis on agar plates, SO-01 to SO-16 visible colonies were obtained on 10-2 to 10-6 dilution Petri plates (Figure 2). 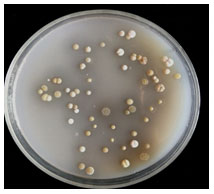 Isolate SO-13 was found to have alkaline protease activity depend on diameter zone of hydrolysis of proteolytic on the plate (Figure 3). Similar result found in Streptomyces griseorubens E44G  (Rashadb et al., 2015) and Streptomyces Indus (Guravaiah 2016) for proteolytic activity. Hence the isolate SO-06 was selected for further studied.

Figure 3: Zone of hydrolysis by the isolate Streptomyces tendae SO-13 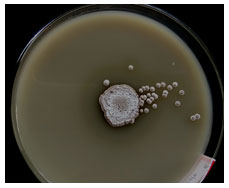 Figure 4: SEM of the isolate Streptomyces tendae SO-13 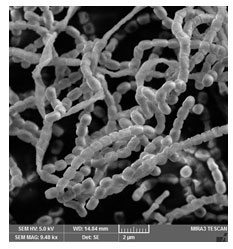 Table 1. Morphological and Biochemical Characterization of isolate Streptomyces tendae SO-13

The 16S rRNA gene was amplified through PCR which showed 1500 kb band on 2% agarose gel (Figure 5). Subsequently, 16S rRNA gene sequence analyses were carried out to elucidate the taxonomic relationships among closely related Streptomyces species. The strain SO-13 has been matriculated into a cluster containing Strepomyces tendae. Based on the phylogenetic analysis the strain was closely related to Streptomyces tendae strain ATCC 19812 exhibiting high similarity (99.88 %) (Takeuchi et al., 1996). So it is assigned as Streptonyces tendae SO-13 (Figure 6). Similar results were noticed in Streptonyces tendae AR1 (Laidi et al., 2006) and Streptonyces tendae1&2 (Bahamdain et al., 2020). The obtained nucleotide sequences SO-13 were submitted to the GenBank database and the accession number assigned is MW130237. The results reveal the isolate SO-13 was identified as Streptomyces tendae. 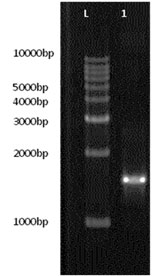 The authors  acknowledge the Department of Studies and Research in Microbiology, Sahyadri Science College (Autonomous), Kuvempu University, Shivamogga for providing adequate lab facilities and first author sincere thanks to UGC-RGNF for providing fellowship for research work.

Astalakshmi A, Thangapandian V and K Lingakumar. (2014). Isolation and Characterization of actinomycetes from the Soil of Devathanam – A Foot-hill of Western Ghats International Journal of Pharma Research & Review, 3(1):15-20.

Gargi Sarkar and Suthindhiran K. (2020). Extraction and characterization of alkaline protease from Streptomyces sp. GS – 1 and its application as dehairing agent Biocatalysis and Agricultural Biotechnology, 25:101590.

Subbaraju. A and R. Onkarappa. (2018). Antibacterial potential of biologically reduced silver nanoparticles from Streptomyces sp. SO-01. International Journal of Pharmacy and Biological Science, 8 (2): 445-451.