Among the parasitic diseases in cattle, demodectic invasion occupies a special place, and is widespread in various climatic zones of the Northern Trans-Urals, the Russian Federation, and other countries. Bovine demodicosis is an enzootic disease caused by the microscopic Demodex bovis mange, parasitizing in the hair follicles of the sebaceous and sweat glands, and localized as separate colonies on the surface of the animal’s body. The disease manifests itself as focal inflammation of the skin in the form of tubercles ranging in size from 0.2 to 1 cm in diameter. In the center of the colonies, a skin scab forms; skin in these areas thickens and loses its elasticity. These areas of the skin have vortex hair formations or their absence. As a result of aggravating pathological processes, sick animals are inert, depressed, have poor appetite and fatness, and decreased milk productivity. In this regard, the objective was to study the intensity of the course of demodectic invasion in cattle in the Northern Trans-Urals. For this purpose, the cattle were clinically examined in 2002-2019 with the obligatory confirmation of the diagnosis of bovine demodicosis by microscopy of skin scrapings and the detection of demodectic mites at various stages of their development. Our studies have established that demodectic invasion in cattle develops in stages in the form of demodectic tubercle colonies: immature, mature, old, and completely developed. Most often, the disease is manifested by a clinically mild – 68.49%, moderate – 26.22% and severe demodectic invasion – 5.29%.

The agro-industrial complex of the Tyumen region is the most important sector of the national economy and the main source of food resources that ensure national security. The production of livestock products largely determines the economic and financial condition of the entire agro-industrial complex (Glazunov and Stolbova, 2014). At each stage of development of animal husbandry, the tasks of improving the industry are becoming more complex and broader. Their successful solution requires animals with high productivity, reproductive capacity, and strong immunity; no less important are their maintenance condition, which should be based on the biological laws of the development of the organism and fully satisfy the physiological needs of animals (Larionov and Vasilevich, 2001; Sivkov et al., 2010(b); Sivkov  et al., 2010(a); Stolbova et al., 2014; ; Stolbova & Skosyrskikh, 2014; Stolbova & Skosyrskikh, 2015; Stolbova et al., 2016; Stolbova & Skosyrskikh, 2016; Olga and Stolbova, 2020; Miedzybrodzki et al., 2021).

The main reason for the emergence and development of skin pathologies of parasitic etiology in cattle today are violations of zoohygienic requirements for feeding and keeping of and caring for animals, as well as non-compliance with microclimate parameters (Sivkov et al., 2010(a); Sivkov et al., 2010(b); Skosyrskikh & Stolbova, 2011; Stolbovа, 2019; Olga and Stolbova, 2020). Demodicosis is currently one of the leading invasive diseases. Bovine demodicosis is a skin disease caused by microscopic mites of the genus Demodex, localized in hair bulbs and follicles, and sebaceous glands (Stolbova, 2018; Stolbova et al., 2016; Olga and Stolbova, 2020; Bowman et al., 2021).

To date, issues on the etiology and pathogenesis of bovine demodicosis, as well as the confirmation criteria for the diagnosis of demodectic invasion, depending on the clinical manifestation of the disease and the intensity of the invasion still remain debatable. Thus, the objective of the research was to study the breed-specific predisposition and clinical manifestation of bovine demodicosis in the Northern Trans-Urals. The Objective of the work was to study the intensity of demodectic invasion in cattle in the Northern Trans-Urals.

The research was carried out in 2002-2019 on the basis of the Federal State Budgetary Educational Institution of Higher Education “State Agricultural University of the Northern Trans-Urals”, the departments of non-communicable diseases of farm animals and infectious and invasive diseases, the laboratory of acarology, the All-Russian Research Institute of Veterinary Entomology and Arachnology – a branch of the Tyumen Scientific Center, SB RAS, as well as in farms of different corporate forms of the Tyumen Region. Bovine demodicosis is an enzootic disease caused by the microscopic Demodex bovis mange, parasitizing as single colonies. The disease manifests itself as focal inflammation of the skin in the form of tubercles ranging in size from 0.2 to 1 cm in diameter.

The resulting digital material was subjected to statistical processing following the biometric techniques, with the calculation of arithmetic mean and root mean square errors (M±m). Values ​​of the reliability criterion were assessed according to the Student-Fisher table of probabilities using Microsoft Excel and Biostat.

Our studies have found a varying intensity of the course of bovine demodectic invasion. We have revealed three – mild, moderate, and severe (generalized) – degrees of skin damage in cattle with demodicosis (Larionov & Vasilevich, 2001; Sivkov et al., 2010(a); Bowman et al., 2021).  With mild degree, up to 10 colonies were recorded on the animal’s body (Figure 1); with moderate degree, up to 100 colonies were counted (Figure 2); and with severe degree, the number reached over 200 of demodectic colonies on the entire surface of the animal (Figure 3). 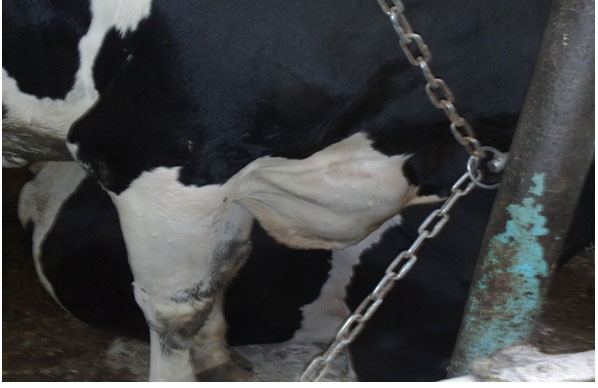 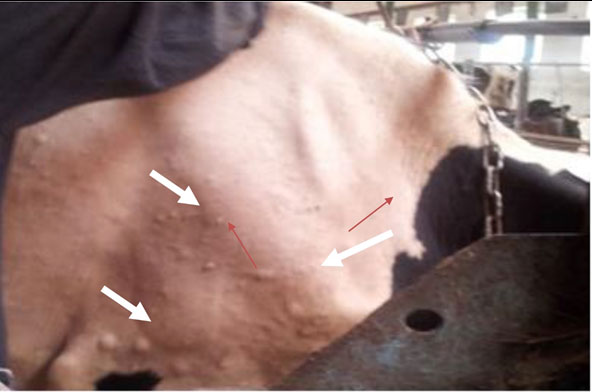 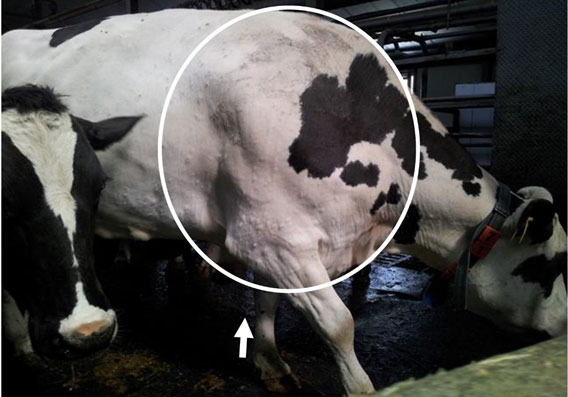 Figure 4: Severity of demodectic invasion in dairy and meat-and-dairy cattle 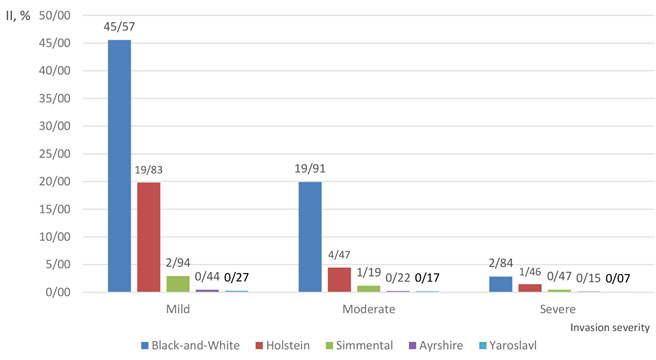 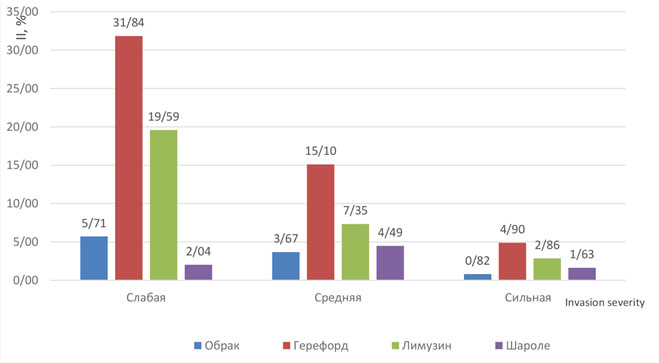 This research was conducted within the framework of the topic No. 296-2021-0018 – Study and analysis of the epizootic state of invasive diseases of agricultural and unproductive animals, bees and birds, changes in the species composition and bioecological patterns of the development cycle of parasites under shifting boundaries of their ranges, and within the framework of the topic АААА-А20-120120490045-8 “Improving the genetic potential of dairy and meat cattle at farms of the Tyumen region, Yamalo-Nenets Autonomous Okrug, KhMAO-Yugra”, funded by the Department of Education and Science of the Tyumen Region.

Glazunov Iu.V., Stolbova O.A. (2014). The efficacy of insecticide and acaricidal drugs in the disacarization of objects of veterinary supervision. Bulletin of Veterinary Medicine, Vol 2 (69) pp 26-29.

Stolbova O.A., Skosyrskikh L.N. (2015). The study of stress resistance in cattle with demodicosis in the Tyumen region. Issues of regulatory regulation in veterinary medicine, Vol 2 pp 84-86.