Helicteres isora L. is a medicinal plant which is used in several diseases, such as snake-bite, dog-bite, diarrhoea and constipation in a new born baby, gastrointestinal disorders, diabetes, cancer, and infections. This plant has also been used in the management of liver damage through traditional medicine. However, the hepatoprotective activity of H. isora L. ethanolic extract has not been reported so much. The present work was carried to investigate the hepatoprotective effect of H. isora L. against paracetamol-induced liver injury in Swiss mice. Paracetamol (PCM) is widely used as an analgesic and antipyretic drug which at high dose can lead to undesirable side effects, such as hepatotoxicity. Paracetamol induce hepatotoxicity was evaluated by an increase (P<0.05) in AST and ALT serum activity. Paracetamol hepatotoxicity was also manifested by an increase in (P<0.05) lipid peroxidation and depletion of reduced glutathione (GSH) in liver tissue.

Ethanol extract of H. isora L. (250, 500 and 1000 mg/kg bw/day) significantly restored the PCM-induced alterations in the biochemical activities of blood and liver tissues. The hepatoprotective effect of H. isora L. was also confirmed by the histopathological examination of liver tissue. Histopathological examination of liver sections in mice administered with 1000 mg/kg bw/day doses of the extract were perfectly protected almost similar to those of untreated mice. The results indicated the hepatoprotective nature of studied plants extract against paracetamol induced toxicity. Our study scientifically validates the folkloric claim as well as traditional uses of H. isora L. as hepatoactive medicine. The results of this study suggests a new direction in the treatment of liver disease in future.

Liver is the principal and metabolic organ involved in the metabolism of vital molecules. Liver diseases have become one of the major causes of morbidity and mortality all over world. From among, drug induced liver injury (DILI) is one of the most common causative factors that poses a major clinical and regulatory challenge (Russmann et al. 2009; Sandhu and Navarro 2020). In spite of tremendous advances in modem medicine, there are hardly any reliable drugs that protect the liver from damage and/or help in regeneration of hepatic cell.

Therefore, searching for effective and safe drugs for liver disorders are continues to be an area of interest. Plants and natural products have been used traditionally worldwide for the prevention and treatment of liver disease. Scientific research has supported the claims of the medicinal efficacy of several of these herbal compounds, as evidenced from the voluminous work on their hepatoprotective potentials (Zhang et al. 2020; Shakya 2020).

More than 700 mono- and polyherbal formulations from over a hundred different plants are available for use (Lahon and Das 2011). Helicteres L. genus has pantropical distribution, comprising approximately 60 species in America and Asia. The hepatic protection exerted by the H. isora L., H. hirsuta and H. angustifolia species were reported in many researches (Maqboo et al. 2019; Bachar et al. 2020). H. isora L. (Sterculiaceae) is a shrub or small tree found in forests. Fruits, seeds, bark and roots of the plant are used (Kumar and Singh 2014; Fernandes et al. 2020; Nguyen 2020). H. isora L. has been used traditionally as an herbal drug for treatment of many ailments throughout south-east Asia since ancient times, in folk and tribal medicines.

Pharmacological studies of different plant parts of H. isora L. based on animal models have revealed its hepatoprotective property. There has been no scientific study on the the hepatoprotective activity of arial parts of H. isora L. previously reported in literature. Our preliminary experimental results were highly encouraging as they revealed that AST, ALT levels were significantly lowered after oral administration of H. isora extract in paracetamol induced liver injury model. Thus, the present investigation confirms the hepatoprotective activity of H. isora and its effect on serum liver enzyme, MDA and GSH levels in paracetamol-induced liver injury in mice.  The present study was with a view to justify the traditional use of the plant in the treatment of liver diseases.

For the preparation of the extract, arial parts of H. isora L. were collected from Dak Mil district – Dak Nong province (Vietnam). Our Department of Botanical Museum has identified the plant. They were cut into small pieces and dried in Laboratory drying oven at 50oC. They were then crushed into a course powder using a laboratory grinding mill with ring sieve, size 0,25 mm. Maceration extraction of H. isora L. in ethanol solvent (70%) followed by drying at 50oC resulted in an average extract efficacy of 21%. The extract was stored at -20oC.

For the experimental animals, outbred Swiss albino mice weighing 18-22 g of either sex, bred in Stem Cell Institute, University of Science, Vietnam National University Ho Chi Minh City were procured and used for the study. The animals were allowed food pellets (Pasteur Institute, Ho Chi Minh City) and water ad libitum. Animals were maintained in a control condition (12 h: 12 h dark and light cycle and room temperature). For the acute toxicity studies, acute oral toxicity study was performed as per OECD-423 guidelines. No toxicity was observed up to the dose of 5.0g/kg body weight. The extract was tested at three dose levels i.e., lower dose of 250 mg, medium dose of 500 mg and the highest dose of 1000 mg/kg body weight.

For the estimation of hepatic MDA and GSH, a portion of each liver was homogenized (1:10, w/v) in 1.15% KCl solution at 0 – 5oC. To a 2 ml of 10% homogenate pipetted into a 15 ml centrifuging tube were added 1ml of Tris-HCl buffer. The mixture was incubated at 37oC for 60 min. After incubation, 1 ml of 10% acid tricloacetic solution was added and mixed vigorously. The mixture was centrifuged at 10,000 rpm for 30 min at 4°C. The resultant supernatant was used for various biochemical assays. Hepatic MDA and GDH were estimation according to the method described in the previous studies (Ohkawa et al. 1979; Moron et al. 1979).

According to the method of Lowry et al. (1951), protein concentration was estimated using bovine serum albumin (BSA) as a standard. For the histopathological examination, a portion of each liver tissue was fixed in 10% buffered neutral formalin solution, embedded in paraffin, sectioned into 3 μm thick slices, and stained with hematoxylin and eosin (HE). The liver tissue injury was examined by a histopathological expert under optical microscope (Parmar et al. 2010; Chen et al. 2012). This work was carried out at Cho Ray Hospital, Ho Chi Minh, Vietnam. For the statistical analysis, all data were expressed as mean ± SD (n = 10). The data were analyzed by Student’s t test and One way ANOVA using Sigma Plot version 11.0. Differences between groups were considered to be statistically significant at P < 0.05.

PCM, a well-known compound for producing chemical hepatic injury in mice has been used as an experimental model to test the potential hepatoprotective activity by several investigators (Parmar et al. 2010; Nazir et al. 2020; Bouhlali et al. 2021). PCM treatment significantly also increased the serum enzyme levels, namely ALT and AST indicating chemical induced hepatocellular toxicity. Serum levels of these enzymes are very sensitive markers employed in the diagnosis of liver diseases. When the hepatocellular plasma membrane was damaged, the enzymes normally present in the cytosol were released into the blood stream. This was quantified to assess the type and extent of liver injury (Sallie et al. 1991; Shakya 2020; Alaraj et al. 2021). Our laboratory standardized the hepatotoxic dose of PCM in mice (unpublished observations). PCM at a dose of 240 mg/kg bw p.o resulted in death of 80 per cent of mice. The macroscopic appearance of the liver showed extensive areas of necrosis associated with haemorrhages.

Fortunately, when reduced to a lesser dose of 230 mg/kg bw p.o, no mortality was observed and the hepatotoxicity that was produced with PCM resembled naturally occurring liver disease (Sherlock and Dooley 2002; Shakya 2020). PCM (230 mg/kg bw) given once orally showed hepatotoxicity as evident from biochemical and histopathological parameters of the study. The crude liver weight, which was increased after PCM administration may be due to haemorrhages, hydropic degeneration and fatty changes associated with necrosis.

The protective effect may be the result of stabilization of plasma membrane thereby preserving the structural integrity of cell as well as the repair of hepatic tissue damage caused by PCM (Pari and Murugan 2004). So, these data demonstrated that the effects of toxicity induced by PCM on the liver function could be effectively counterbalanced by H. isora L. extract treatment. This fact was based on the tendency of liver enzymes to return towards their respective levels in the normal control group. Notably, the experimental mice treated with H. isora L. extract had significantly lower levels (P< 0.05) of liver MDA compared with the PCM-treated mice of Group 2.

Moreover, there were no significant differences in the lipid peroxidation end product MDA between medium dose or high dose extract-treated animals (Group 5, 6) and control group (Group 1), and better than those recorded from silymarin-treated mice (Group 3) (Table 2). Therefore, the studied plant has great ability to reduced oxidative stress by preventing lipid peroxidation. In the current study, an increase in the hepatic MDA level suggested the enhancement of lipid peroxidation, consequently leading to hepatic damage as well as the inactivation of the antioxidant defense system (Simeonova et al. 2014; Tsai et al. 2017; Moke et al. 2021).

However, the increased hepatic MDA level decreased after treatment with the extract. The suppression of MDA production is likely to promote the activities of SOD, GPx, and GRd (Simeonova et al. 2014; Tsai et al. 2017). These results suggested that treatment with the extract may protect hepatic cells from further damage during cirrhosis. GSH in the PCM-treated mice were lower than in the normal mice (P<0.05). When PCM is taken in at toxic doses, the compound is converted to a toxic form, NAPQI (N-acetyl-p -benzoquinoneimine). NAPQI can rapidly react with glutathione (GSH) and lead to a 90% total hepatic GSH depletion. Treating the cirrhotic animals with silymarin significantly (P<0.05) increased the GSH level and induced the survival of hepatocytes (Yen et al. 2007; Shakya 2020). 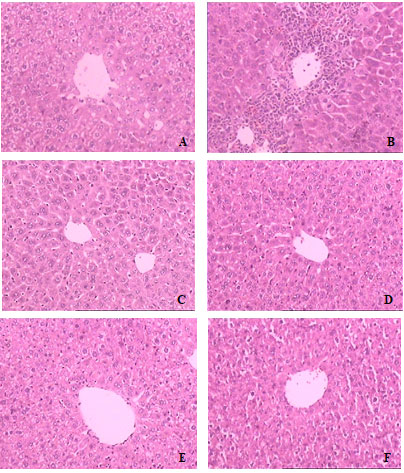 Although the active compounds of the tested plant have not been well identified in the present study. Preliminary qualitative studies on various extracts suggested presence of phenolics, flavonoids, glycosides, tannins, carotenoids, ascorbic acid and saponins in different parts of H. isora; concentrations may vary according to season or part studied (Dayal et al. 2015). Especially, β-sitosterol was found to be the major active constituents in bark/stem of H. isora L. (Jain et al. 2009; Badgujar and Jain 2009; Chawla and Bansal 2014). The reduced lipid peroxidation in mice liver homogenates were reported to be due to total phenolics or flavonoids contents of some medicinal plants. Many studies demonstrated that β-sitosterol protected liver damage and it may have beneficial properties in the prevention of liver toxicity (Kery et al. 2001; Sujila et al. 2014). The decrease in the status of the lipid peroxidation and upregulation of SOD and CAT could be attributed to the inherent antioxidant potential of β-sitosterol (Devaraj et al. 2020).