Guna Bhushana Daddala*1, Swaroopa
Rani. A1 and Kiran Kumar A2

The objective of this study was to determine the uptake of glucose in L6 cell lines and alpha glucosidase inhibition activity of Secoisolariciresinol diglucoside (SDG) involved in glucose utilization. Diabetes mellitus is a clinical disorder characterized by hyperglycemia, an elevated amount of glucose circulates in the blood plasma. Different concentrations of SDG were analyzed for glucose uptake activity and alpha glucosidase inhibition activity. The results found to be significantly comparable with Metformin, the highest value was 68.41 ± 0.80 at 100 µg/ml dose for SDG and 85.50 ± 0.83 value for Metformin at the same concentration. The alpha glucosidase inhibition activity for SDG was found to be 79.67 ± 0.40 % and for Voglibose it was 96.33 ± 0.40 % at 2000µg/mL concentration.

The results of the current work therefore clearly indicate the potential of SDG to manage hyperglycemia. Elevation of the glucose uptake by SDG in association with glucose transport supported the up regulation of glucose uptake, through alpha glucosidase inhibition activity it delays the carbohydrate digestion which leads to decreases the post prandial blood glucose levels. The present study shows that SDG activate glucose uptake in L-6 cell line of skeletal muscles, which can correlate to that of standard Metformin used by diabetic patients. Currently increasing usage of Nutraceuticals is more evident in order to stay away from the synthetic drugs and its side effects. Our research can be considered as a step towards a more profound understanding of hypoglycemic activity of SDG as there is no much data available.

Diabetes mellitus is a metabolic disease categorized by hyperglycemia, occurs when defects in insulin secretion, insulin action, or both. The diabetes associated with the consequences of long-term damage, malfunction and failure of the various organs, specifically the eyes, kidneys, nerves, heart, and blood vessels (Diabetic care 2007). It is a serious metabolic disorder affecting the reasonable number of people globally, in which the effected person experiences high blood sugar, either may be because of the pancreas does not produce enough insulin or the produced insulin will not be effectively used by the body cells. Causes for enhancing the growth of its epidemic are the variances in social structure, intellectual stress, obesity, hormonal imbalance and heredity (Amos et al. 2010; Mukhtar et al. 2019).

Diabetes is the most common endocrine disorder and by the year 2010, also it is estimated that, more than 200 million people will comprise diabetes and 300 million will subsequently have the disease worldwide by 2025 (King et al. 1998; Amos et al. 2010). The percentage of the population is expected to increase by 55% with diagnosed diabetes between 2015 and 2040, may reaches to 642 million people by the majority of cases in low and middle-income countries (Eddouks and Maghrani 2004). Cumulative epidemiological studies have suggested that, the consumption of fruits, vegetables and few medicinal herbs to decrease the incidence of diabetes. The plant kingdom expresses a large pool of biologically active compounds which has not been explored yet (Amos et al. 2010; Mukhtar et al. 2019).

According to bygone literature, more than 800 plants are reported to have anti-diabetic properties (Kesari et al. 2007). More than 1200 plants are used in traditional medicine for their alleged hypoglycemic activity as per ethno pharmacological surveys (Fang etal. 2008). Inhibition of the carbohydrate digestive enzymes (α-glucosidase and α-amylase), improved peripheral uptake of glucose by hemidiaphragm are the potential preliminary mechanisms that are involved in hypoglycemic activity.

Phenolic compounds or polyphenols are a group of chemicals that are extensively distributed through the plant kingdom and thus form an essential part of the human diet. The α-glucosidase inhibition in our experiments could be due to the presence of these compounds. These compounds have been found to be responsible for blood glucose reducing activity and have also been reported to activate GLUT1-mediated glucose uptake (Kim et al. 2001; Eid et al. 2010; Ali et al. 2019).

L6 cell lines are derived from the skeletal muscle, used in antidiabetic research, they are good model for the glucose uptake because they have been used extensively to elucidate the mechanism of glucose uptake in the muscle, have an intact insulin signalling pathway and express the insulin sensitive GLUT-4 (Ruddich et al. 1998). Secoisolariciresinol diglucoside (SDG), is a known antioxidant found in flaxseed (Prasad 2000; Kezimana et al. 2018). The present study was carried out, to study the hyperglycemic activity of Secoisolariciresinol diglucoside (SDG) through in vitro α-glucosidase activity and glucose uptake activity as there are no ample experimental studies have been carried so far.

Samples of flax seeds (whole grains) were obtained from a local store in Chennai, India. p-nitrophenyl glucopyranoside (pNPG) procured from Sigma Aldrich, α-glucosidase enzyme from Sigma Aldrich. L-6 cell lines purchased from MCCS Pune. All other chemicals /reagents and solvents used in this study were purchased from Loba Chem, Merck, India Pvt. Ltd as analytical reagent grade materials and applied without subsequent purification. Isolation and purification of SDG described in, the extract of L. usitassimum was prepared by 80 % Aqueous methanol (Daddala et al. 2018).

The reaction mixture was incubated at 37°C for 20min and the reaction will be stopped by adding 1 mL of Na2CO3 (0.1M). The yellow-colored reaction mixture, 4-nitrophenol, released from pNPG was measured at 405nm using UV – VIS spectrophotometer. A blank and the sample blanks were also prepared by adding 5 µL of deionized water instead of the plant extract and 20 µL of deionized water instead of the enzyme, respectively. Voglibose was used as a positive control and the inhibitory activity of α-glucosidase was calculated using the following formula,

For the glucose utilization experimental procedure on L-6 cell lines, the glucose utilization was determined by the minor modification method defined by van de Venter et al. (2008). The L-6 cells were dislodged by the brief exposure to 0.25% Trypsin in phosphate-buffered saline, counted and suspended in the new growth medium. Then seeded at a density of 6000 cells per well into a 96-well culture plate and allowed to adhere and grow in a humidified incubator with 5% CO2 at 37°C for three days. Two cell-free rows also included to serve as blanks. On day three after seeding, without changing the medium, different concentrations (3.125, 6.25, 12.5, 25, 50 and 100 𝜇g) of test samples and standard Metformin were added to each well.

After 48 h incubation, the spent culture medium was removed by aspiration and replaced with a 25 𝜇l incubation buffer (DMEM medium diluted with PBS, 0.1% BSA and 8 mm of glucose) and further incubated for an additional time of 3 h at 37°C. The negative control (untreated) which contains only the incubation buffer without samples. After incubation, 10 𝜇l of the incubation medium was removed from each well and transferred into a new 96-well plate, to this added 200 𝜇l of glucose oxidase reagent to determine the concentration of glucose in the medium. After 15min of incubation at 37°C, measured the absorbance at 492 nm using a microtitre plate reader. The amount of glucose utilized was calculated by using the below mentioned formula, the difference between the untreated control and treated wells.

α-GLUCOSIDASE INHIBITION ASSAY: In this study, the results indicated that SDG exhibited significant effect on alpha-glucosidase than extract at all the tested concentrations, illustrated in Table -1. At the highest concentration (2000µg/ml) investigated, the SDG, extracts displayed appreciable effect on alpha-glucosidase by 68.7% and 79.7 % respectively. However, voglibose as positive controls, was more effective in the respective assays than the extract and SDG, exhibiting percentage inhibitory activity of 96.3% against alpha-glucosidase.

Figure 1: The effect of SDG, extract of L. usitassimum and Voglibose on alpha-glucosidase activity. Indicates a significant increase relative to the control. Data expressed as mean ± SD (n = 3). 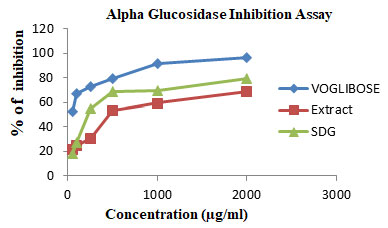 Glucose Utiliastion In L6 Cell Lines: The results obtained for glucose uptake in L6 cells in the presence of the SDG, extract of L. usitassimum at 3.125µg to 100 µg/ml are presented in table 2. The SDG caused a significant higher increase in glucose uptake in both L6 cells at all the concentration tested in a concentration-dependent manner when compared to the un treated control and metformin. On the other hand, the crude extract of L. usitassimum also exhibited glucose uptake at 100 µg/ml but lower than observed for SDG.

The L6 cell lines, the extract of L. usitassimum showed some significant potential in lowering blood glucose levels at 50, 100 μg/ml concentrations tested (Figure 2). However, at all the concentrations the extract also caused a slight increase in glucose uptake in L6 cells but less significant than SDG. The highest activity of glucose uptake was for extract 52.16 ± 0.41 and for SDG 68.41 ± 0.80 at 100 μg/ml concentration. Whereas slightly lower than metformin 85.50 ± 0.83. These results were nearly correlated with metformin, which were used as the standard antidiabetic drugs.

The present study has employed to identify the potential mechanism of probable antidiabetic actions of SDG. The result obtained in this study on glucose uptake using L6 cells demonstrated that SDG increased glucose uptake in L6 cells when compared to extract but somewhat lesser than Metformin (Figure 3). Metformin lowers glucose, sensitizes insulin by reducing gluconeogenesis and opposing glucagon-mediated signalling in the liver and in a lesser extent by increasing glucose uptake in skeletal muscle. It exerts its hypoglycemic effect through activation of the AMP activated protein kinase (AMPK) in the liver (Viollet et al. 2012).

Our experimental outcome suggested that the SDG, therefore, masquerade as metformin by increasing glucose uptake in the skeletal muscle. SDG is a phytochemical lignan, the presence of phytochemicals suppresses glucose release and also enhances glucose uptake. Therefore, it may be hypothesized SDG could be linked to activation of the insulin signalling cascade, resulting in stimulation of GLUT4 that facilitates the translocation of glucose into the cell (Hanhineva et al. 2010; Rosenzweig and Sampson 2021).

Figure 2: The effect of SDG, extract of L. usitassimum and Metforminon glucose utilization inL6cells. Cells were treated for 48 h in the presence or absence of varying concentration of the SDG and extract. Data expressed as mean ± SD (n = 3). 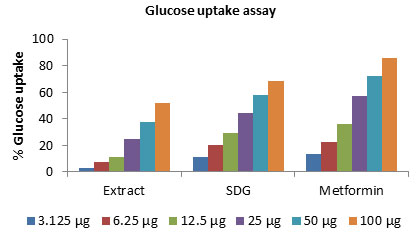 The toxicity assay revealed that L. usitassimum extract, SDG were not toxic to L-6 cells, producing less than 10% cell death at the concentrations investigated. However, metformin also displayed no significant toxicity but rather proliferated the cells. Furthermore, the low level of cell death exhibited by this extract, SDG and the positive controls most likely explains the significant reduction in glucose uptake in the cells (Rosenzweig and Sampson 2021). To our knowledge no prior studies have examined the in vitro glucose uptake assay, α-glucosidase inhibitory activity of SDG. Therefore, this will be a foremost in vitro approach on cell lines.

The findings of the present study suggests that SDG enhances the glucose uptake under in vitro conditions, exerts its hypoglycemic activity by reducing the post prandial glucose levels by possessing alpha-glucosidase inhibition activity. The antidiabetic activity might be due to the phyto constituents of L. usitassimum. Moreover, SDG itself is a phytochemical lignin. It is also concluded that based on the toxicity assay SDG found to be nontoxic and safe to the L6 cells. However, in vivo studies have to be carried out to validate the in vitro results by employing different in vivo models and clinical trials for their effective utilization as therapeutic agents.

Conflit of Interests: Authors declare no conflict of interests.

Amos A, McCarty D and Zimmet P (2010). The rising global burden of diabetes and its complications, estimates and projections to the year 2010. Diabetic Med 14: S1-S85.