Medicinal plant is the future of phytomedicines (plant-derived drugs) and serves as a rich source of food, fibres and drugs. They have been used in folk medicine since ancient times for the prevention and treatment of the numerous diseases as they express a vast array of biological activities. Presently, research is focusing attention on medicinal plants as it is considered as the most sustainable alternative source of antioxidants to supplement the endogenous oxidative stress defense system in humans (Rahman et al., 2012 Banji et al 2028, Engwa 2018,  Zwolan et al 2020).

Plants contain a wide variety of free radical scavenging molecules, such as anthocyanins, carotenoids, flavonoids, glutathione, vitamins and endogenous metabolites (Zheng and Wang, 2001).The concentration of the phenolic compounds like phenolic acids, flavonoids, anthocyanins and tannins etc. may be related to the antioxidant activity of medicinal plants (Djeridane et al., 2006). Natural antioxidants have gained interest in pharmaceutical research as an alternative for substitution of synthetic substances showing antioxidant activity (Huang et al., 2005). It is mainly due to the fact that natural antioxidants are cost effective, easily available, non-toxic, eco-friendly and sometimes more efficient than synthetic ones. Continuous efforts are required to characterize plants phytochemicals for their antioxidant potentials and mode of action for various therapeutic uses against oxidative stress-related diseases, (Zwolan et al 2020).

Whole plant consisting of (root, stem, leaf, seed, flower) was shade dried for one week and kept in an oven at 40-45°C for 24 h, and then grinded in an electrical grinder to make coarse powder. Extraction was done from 20 g of plant powder in 200 ml of solvent by using a soxhlet apparatus for 12 h. Methanol, ethanol and double distilled water were used as extraction solvents for extraction purpose. Extracts were then filtered and dried at 40°C in a rotary evaporator. Extracts were stored at 4°C till use. Percentage yield {PY, expressed in (w/w)} of crude plant extract was calculated by given formula:

One gram of each extract was dissolved in 10 ml of respective extraction solvents to obtain a stock solution of concentration 100 mg/ml. Test plant samples were diluted in various concentrations according to the experiments.Phytochemical testing of the plant for various solvent extract was carried using a standard protocol (Harborne, 1973; Sofowora, 1993).

Antioxidant assay through DPPH: The free radical scavenging activity of the extracts, based on the scavenging activity of the stable DPPH free radical, was determined by the method given by McCune and Johns, (2008) with some modifications. One ml sample of various concentrations (100-600 µg/ml) of plant extract (PE) was added to 3 ml methanolic solution of DPPH (0.004%) and shaken vigorously. The mixtures were incubated in the dark for 15 min at room temperature. Ascorbic acid was used as standard and methanol served as blank. The solution without sample was served as control. The absorbance of the samples was recorded at 517 nm by using a spectrophotometer (UV1, Thermo Scientific, US). The experiment was expressed as the percent inhibition of free radicals by the sample and was calculated using the following equation:

Hydrogen Peroxide (H2O2) Scavenging Assay: The radical scavenging activity of methanolic, ethanolic and aqueous extracts of the plants to scavenge hydrogen peroxide (H2O2) was evaluated by the method of Ruch et al., (1989) with slight modifications. One ml sample of various concentrations (100-600 µg/ml) of plant extract (PE) were added to 2 ml of H2O2 (40 mM) prepared in (50 mM, pH-7.4) phosphate buffer. The test samples were incubated for 10 min at room temperature. The absorbance was measured at 230 nm (Thermo Scientific UV 1). Phosphate buffer without H2O2 was used for blank and hydrogen peroxide solution without extract served as control. Ascorbic acid was used as a standard.

Total phenolic content (TPC) was measured by Folin-Ciocalteu assay (McDonald et al., 2001). In brief, 0.5 ml Folin reagent (1:10 diluted with DDW) was added to 0.5 ml (200 µg ml-1) PE and finally 4 ml (1M) aqueous sodium carbonate (Na2CO3) was added to this reaction mixture  and incubated for 15 min at room temperature. Absorbance was recorded at 650 nm. Gallic acid was prepared in methanol and DDW (1:1) and used as standard. Total phenolic content was expressed in terms of gallic acid equivalent (GAE, mg/g of dry mass), which is a common reference compound. Total flavonoid content (TFC) was determined using the method of aluminium chloride (AlCl3) (Chang et al., 2002). The plant extract (1 ml, different concentration) prepared with different solvent (methanol, ethanol and water) was taken in which 100 μl AlCl3 (10% w/v), 100 μl Na-K tartrate and 2.8 ml distilled water were added and kept for 30 min. Finally, the reaction mixture was diluted to 10 ml with double distilled water and the absorbance was measured at 415 nm. The results were expressed as mg rutin (RE)/g plant material.

Reducing potential capacity of methanolic, ethanolic and aqueous plant extract was estimated by the method of Athukorala et al., (2006) with some modifications. In brief, 1ml of PE (50-300 µg/ml) prepared in different solvents were mixed with 2.5 ml of phosphate buffer solution (PBS, 0.2 M, pH- 6.6) and 2.5 ml potassium ferricyanide (30mM). The above reaction mixture was incubated at 50°C for 20 min. After that, 2.5 ml trichloro acetic acid (TCA, 0.6M) was added to the mixture to stop the reaction and centrifuged at 3000 rpm for 10 min. Then, 2.5 ml of supernatant was taken out and mixed with 2.5 ml double distilled water and 0.5 ml ferric chloride (FeCl3) solution. Absorbance was recorded at 700 nm. Ascorbic acid was used as standard.

Statistical analysis: All the above experiments were performed in quadriplate (n=4) and repeated thrice (x=3). Data were analyzed as mean ± SE by applying one way analysis of variance (ANOVA). Tukey’s multiple range tests were used for separation of means when ANOVA was significant (p< 0.001) (SPSS 16.0; Chicago, IL, USA). IC50 was calculated through linear regression analysis. The graphs were drawn in sigma plot 11.0.

Percentage yield of A. paniculata extract was found maximum (22%) in aqueous followed by methanol (18.4%) and ethanol (17.6%) was obtained. The percentage yield of extract differed in various extraction solvents and this may be due to various degrees of solubility of plant materials depending on polarity of solvents. A similar trend was seen in leaves extract of A. paniculata (Banji et al., 2018). Our results highlight that methanolic and ethanolic extracts whole plant were enriched in phytochemicals like alkaloids, amino acids, carbohydrate, flavonoids, phenols, saponins, steroids and tannins while aqueous extract shows presence of alkaloids and amino acids only (Table 1). It may be due to poor solubility of these phytochemicals in the aqueous extract.

In the present study, the free radical scavenging ability of the crude methanolic, ethanolic and water extracts were determined through the degree of discoloration of the methanol solution of DPPH (Table 2). In A. paniculata, methanolic extract showed higher scavenging activity (IC50 = 398.31 µg/ml) than ethanolic (IC50 = 404 µg/ml) and aqueous extracts (IC50 = 483.29 µg/ml). The present study reveals that the best antioxidant activity in terms of DPPH scavenging strength was displayed by methanol extract followed by ethanol and aqueous extract. The higher antioxidative capacity of methanolic extract followed by ethanolic extract may be explained via the higher content of biologically active substances, such as e.g. polyphenol. Ethanolic extract was characterized by higher free radical antioxidant activity than water extract in Argyreia pierreana, Matelea denticulata (Gudise et al., 2019) and Nigella sativa (Zwolan et al., 2020).

Hydrogen peroxide (H2O2) scavenging activity of A. paniculata plant was observed higher in methanolic (IC50= 377.074 µg/ml) followed by ethanolic (IC50= 379.06 µg/ml) extract and aqueous extract (IC50= 467.65 µg/ml) (Table-3). H2O2 scavenging activity relies upon the phenolic content of the plant extract by donating electrons to H2O2, thereby neutralizing it into water. The study suggests that aqueous extract will be required in relatively high concentration to show its effectivenss. The ethanolic extract of the Aesculus hippocastanum was capable of scavenging H2O2 in a dose dependent manner (Geetha et al., 2013). H2O2 radical scavenging activity was also reported from different extracts of E. prostrata (Sinha and Raghuwanshi, 2016a).

Presence of active metabolites like phenol and flavonoid contents in plant extract depend on solvent used (Sulaiman et al., 2011). Phenolic compounds present in plant contain an aromatic ring bearing one or more hydroxyl groups. Flavonoids are the largest group of naturally occurring phenolic compounds, which occurs in different plant parts in form as aglycone and glycosides. It has two benzene rings separated by a propane unit. Their ideal structural chemistry nature helps them to scavenge injurious free radicals such as super oxide and hydroxyl radicals (Younes and Siegers, (1981). Therefore, acting as antioxidants for their scavenging activity (Das and Pereira, 1990) or chelating process, inhibition of hydrolytic and oxidative enzymes and anti-inflammatory actions (Clavin et al., 2007) and giving protection against cardiovascular disease, certain forms of cancer and age-related degeneration of cell components. Flavonoids might show higher antioxidant activity in organic solvent due to structure and substitution pattern of hydroxyl group.

Table 4. Total phenolic and flavonoid content of A. paniculata in different solvents

The reducing power of the extracts (methanolic, ethanolic and aqueous) of A. paniculata (Fig. 1) plant increased in a concentration dependent manner from lower to higher concentrations. Similar results reported by (Abdallah et al., 2016) in which the reducing power of Ziziphus mauritiana extract increased with the increase of their concentrations. Maximum reducing power was observed in the methanolic extract the plant. In reducing potential assay, after the addition of the extract, the yellow colour of the test solution changes from yellowish green to blue. The colour change of sample solution indicates the reducing power of extract of plants. High absorbance shows high reduction potential of the plant. These reducers show their antioxidant action by breaking the free radical chain by donating a hydrogen atom (Gordon, 1990). Thus, it is concluded that both polyphenolic compounds and reducers present in the extracts are major determinants of antioxidant capacity of extracts. 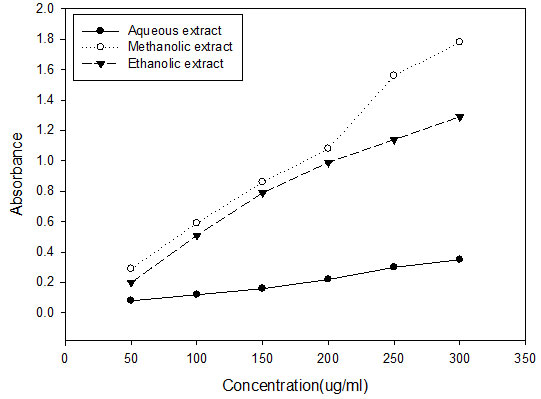 Figure 2: Correlation between antioxidant and reducing potential in (A) Methanolic, (B) Ethanolic and (C) Aqueous extract of A. paniculata plants 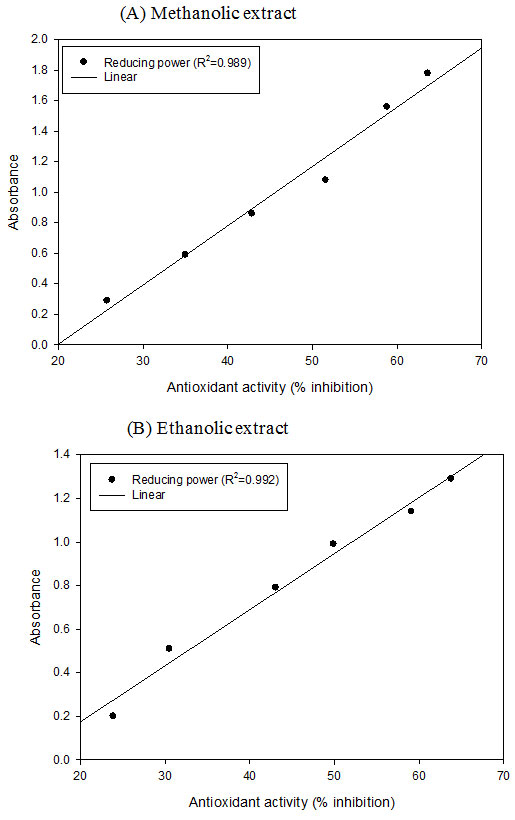 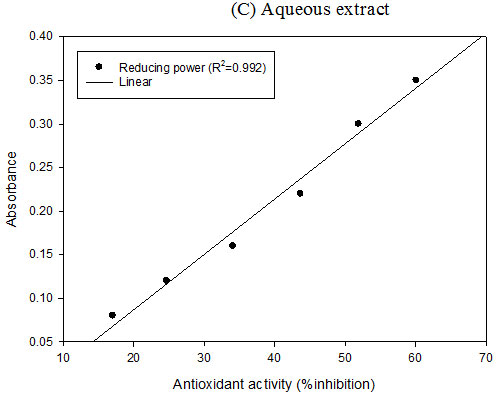 Phenolic compounds play an important role as antioxidants and a good correlation exists between the concentration of plant phenolics and the total antioxidant capacity (Sinha and Raghuwanshi, 2016a). The phytochemicals present in the plant and food products are generally nontoxic and contain many medicinal properties. Generally, antioxidants and polyphenolic compounds are mutually related with each other for their activities. A. paniculata is a good source of phytochemicals like phenolics, flavonoids, antioxidants, alkaloids and tannins etc. These phytochemicals play an important role in promoting pharmaceutical drug preparation and are used for curing various health ailments (Usman and Osuji, 2007).

Figure 3: Correlation between antioxidant activity and polyphenols (TPC and TFC) (A) Methanolic (B) Ethanolic (C) Aqueous extract of A. paniculata

Our study reports that the whole plant extract of A. paniculata plant is a rich source of natural antioxidants. The antioxidant property, reducing potential and polyphenolic components like total phenols and flavonoids varied significantly in the different extraction solvent. The organic solvent i.e. methanol and ethanol gave better results than aqueous one. Thus, bioactive compounds present in the extract of this plant may develop into antioxidant agents in the form of plant based drugs that may have applications in human health.

The authors would like to thank the University Grants Commission for research support.

Conflict of Interests: The authors declare that they have no competing interests.

Chandrasekaran, CV., Gupta, A., and Agarwal, A. (2010) Effect of an extract of Andrographis paniculata leaves on inflammatory and allergic mediators in vitro. Journal of Ethnopharmacology, 129(2), pp.203-207.

Engwa, G.A. (2018) Free radicals and the role of plant phytochemicals as antioxidants against oxidative stress-related diseases. In: Phytochemicals-Source of Antioxidants and Role in Disease Prevention (Edited by) Toshiki Asao and Md Asaduzzaman, InTech: London UK

Gudise, V., Chowdhury, B. and Manjappa, AS. (2019) In vitro free radical scavenging and antidiabetic activity of aqueous and ethanolic leaf extracts: a comparative evaluation of Argyreia pierreana and Matelea denticulata. Future Journal of Pharmaceutical Sciences, 5(13).

McCune, LM. and Johns T. (2002) Antioxidant activity in medicinal plants associated with the symptoms of diabetes mellitus used by the indigenous peoples of the North American boreal forest. Journal of Ethnopharmacology, 82(2-3), pp.197–205.

Usman, H. and Osuji, J.C. (2007). Phytochemical and in vitro antimicrobial assay of the leaf extract of Newbouldia leavis. African Journal of Traditional, Complementary and Alternative Medicines,