Establishment of In vitro Adventitious Root Cultures, Analysis of Phenolics and Curculigoside Contents In Curculigo orchioides

1Institute of Tropical Biology, Vietnam Academy of Science and Technology

Curculigo orchioides Gaertn. (Amaryllidaceae), which grows in subtropical regions of Asia, has been used as a traditional herbal medicine in China, India and Vietnam It is believed to be a tonic for the treatment of declined physical strength. Curculigoside, one of the main bioactive phenolic compounds in the rhizome of Curculigo orchioides Gaertn., has been shown to have significant antioxidant properties by scavenging superoxide radicals in the normal systems, and anti-apoptotic activities in H2O2-treated vascular endothelial cells (Tang et al. 2004; Wu et al., 2005; Wang et al., 2010).

The quality and quantity of the secondary metabolite collected from wild and fieldgrown plants are often fluctuating and heterogeneous depending upon the environmental conditions. Infestation, diseases and the application of pesticides additionally decrease the quality of the plant materials (Gerth et al., 2007). One is hence listed in this category.

Therefore, there is a need to develop an alternative strategy to full-fill the ever increasing demand. Few of the known strategies are in-vivo cultivation, micropropagation, direct rhizogenesis and root organ culture. By these techniques, secondary metabolites are isolated and produced in large quantities, as well as of good quality and are stable and produced rapidly in an adapted culture medium. Therefore, production of secondary metabolites under in vitro conditions has become an active field of research (Sato et al., 2001).

Adventitious roots have been successfully induced in many plant species and cultured for the production of high value secondary metabolites of pharmaceutical, nutraceutical and industrial importance (Mehrotra et al., 2007; Murthy et al., 2008). In this study, we describe the effects of the different strength of media, concentrations of sucrose and pH different on growth, phenolics and curculigoside production in adventitious root culture Curculigo orchioides Gaertn.

Plant material and adventitious root induction: Wild plants were collected in the An Giang province in Vietnam and were identified by Dr. Son of Botanical Museum (Institute of Tropical Biology, Vietnam Academy of Sciences and Technology). Young leaves were used as explants for adventitious root induction in winter. Leaf explants were washed with 70% ethanol for 30 s. And then they were transferred into the bottles with 100 mL of 50% (v/v) sodium hypochlorite solution and 5–6 drops of tween 80.

The bottles were shaken for 20 min. Leaf explants were cut into 0.5 cm×0.5 cm sections after being washed with sterilized distilled water for five times. They were inoculated on MS (Murashige and Skoog, 1962) medium containing 3.0 mg/L NAA (1-naphthaleneacetic acid), 3% (w/v) sucrose and 0.6% (w/v) agar. All the initial pHs of the medium were adjusted to 5.80 with 0.1 M of NaOH or 0.1 M of HCl before autoclaving.The cultures were maintained in a growth chamber at different temperatures 25 °C in the dark. The initiation ratios and lengths of the adventitious roots were recorded after incubation for eight weeks.

Effects of Culture Conditions on Root Biomas: The well established in vitro adventitious roots that were cultured onto MS medium supplemented with 3.0 mg/L NAA was used as the initial material. Liquid cultures were established by inoculating 1.0 g (fresh weight, FW) adventitious roots into 100 mL Erlenmeyer flasks containing 75 mL of different strength liquid MS medium with NAA (3.0 mg/L). The flask was kept under continuous agitation at 80 rpm on an orbital shaker at 25 ± 1°C under dark condition.

Statistical analysis: All in vitro experiments were conducted in 3 replications. The data were analyzed by analysis of variance (ANOVA) to detect significant differences between means using MS Excel. Means differing significantly were compared using the LSD at the 1% probability level by SAS program (ver. 6.12).

Quantification of Phenolic and Curculigoside Content from Adventitious Root Cultures

Adventitious root formation has a complex molecular process involving numerous endogenous and exogenous physiological factors (Sorin et al. 2005). According to Praveen et al. 2009, the process of induction and differentiation in the physiological stages of rooting can be triggered by changes in endogenous auxin concentrations and external addition of specific auxins (Praveen et al. 2009). Curculigo orchioides leaf samples were grown on MS medium supplemented with 3 mg/L NAA to stimulate adventitious roots. The generated adventitious roots were grown on liquid MS medium to multiply biomass and used as raw materials to investigate the effects of some factors on the growth and accumulation of secondary compounds in adventitious roots (Fig. 1).

Effect of Culture Conditions on Adventitious Root Growth of Curculigo orchioides: The effect of MS strength, pH and sucrose concentration were evaluated in term of fresh weight, dry weight of adventitious roots produced for each treatment as shown in Table 1. pH affected the root development through an ion exchange process through its membrane. According to “developing hypotheses about the acid”, the size of cells were manipulated by its environment’s pH, where it decreases with decreased pH (Cosgrove, 1999). Winch and Pritchard (1999); Evans (1976); Edwards and Scott (1974) concluded that environemtal pH induced root elongation. The effects of pH on the development of adventitious roots were proved by Ling et al.

(2009) while culturing Orthosiphon stamineus roots. pH 6.0 was the best among pH 4.0; 5.0; 5.8 và 7.0 and pH 6.0 was also appropriate for the adventitious roots development and saponin accumulation in Panax ginseng (Kim et al., 2005). The results showed that, the culture medium with pH = 6.5 is the best compared to the environment with pH under investigation for growth of Curculigo orchioides adventitious root (Fig 2.), with a mean value of 1.833 g FW and 0.147 g DW. Phenolics and Curculigoside content of Curculigo orchioides adventitious root were not statistical difference in the culture medium with variable pH (Table 2).

Carbohydrate was essential for plant metabolism In vitro, therefore sugar content in the media had a crucial impact on the root induction and development. Sugar plays an important role in the regulation and expression of the transcription of photosynthesis genes (Sheen, 1990) and also to signals of abscisic acid and ethylene (Leon and Sheen, 2003). Cheng et al. (1992) reported sacrose concentration at 2-3 % positively affected the root induction of Eucalyptus sideroxylon. Moreover, sugar concentration was reported to have effects on adventitious roots induction of Orthosiphon stamineus and Scopolia parviflora at concentration 30% and 50%, respectively (Ling et al., 2009; Min, 2007).

Echinacea angustifolia adventitious roots were cultured on bioreactor on MS media supplemented with 2 mg/l IBA and 50 g/L sucrose. The results showed that, the culture medium supplemented with 40 mg/L sucrose is the best compared to the environment with pH under investigation for growth of Curculigo orchioides adventitious root (Fig 3.), with a mean value of 2.471 g FW and 0.198 g DW. Moreover, the optimum sucrose concentration for highest production of secondary metabolites may be varied from every plant species (Koch, 2004).

The best sucrose concentration for production of phenolics, flavonoids and chlorogenic acid of E. angustifolia root suspension cultures was found to be 5% (w/v) (Wu at el., 2006) while for Hypericum perforatum adventitious root cultures, 5% to 9% (w/v) of sucrose concentration demonstrated the increment of secondary metabolites production (Ganefianti et al., 2017). Similar observation also displayed in the present study of adventitious root culture of Curculigo orchioides where the highest curculigoside content (75.330 µg/treatment) was enhanced in MS medium supplemented with 4% (w/v) sucrose concentration (Table 2).

These results were supported by the detection of curculigoside content through chromatogram peaks according to the sucrose concentrations treatments using HPLC (Fig. 5). These results may be due to the osmotic stress that occurred during the accumulation of high carbon ion in a nutrient medium that boost the production of secondary metabolite in plant cells (Cui et al., 2010; Praveen and Murthy, 2012; Wang and Weathers, 2007 Kusuma et al., 2016). 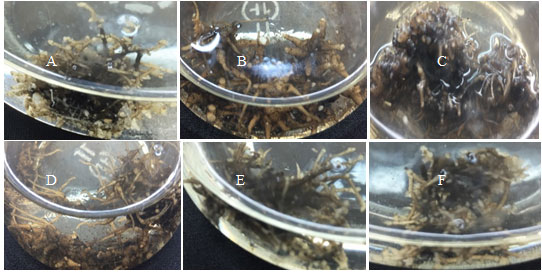 In terms of nutrients requirement, different plants entail varying content of nutrients for growth. Based on Table 1, data recorded after four weeks of culture revealed that between all MS medium strengths, the fresh weight of adventitious roots cultured on the ¾ strength of MS medium was found to produce the highest root biomasses with a mean value of 2.499 g FW and 0.200 g DW. Nutrients content has an important regulatory role on repressing the transcription of photosynthetic genes (Sheen at el., 1999) and interacting with abscisic acid and ethylene signaling (Yanaglsawa at el., 2003). Medium salt strength also induced changes in growth, physiology and secondary metabolite content in adventitious roots of Morinda citrifolia (Baque at el., 2010).

In vitro adventitious root culture showed a high rate of proliferation and active secondary metabolism (Hahn at el., 2003; Yu at el., 2005). Therefore, a substantial increase in phenolic and curculigoside content was detected in the adventitious roots grown in modified MS medium that had the lower macro salt concentration. The results are in agreement with earlier studies on Lobelia inflata (Yonemitsu at el., 1990), Fagopyrum esculentum (Lee at el., 2007), and Withania somnifera (Murthy at el., 2008). Adventitious-root cultures of Iris germanica on liquid medium accumulated 4-5 fold higher contents of isoflavone, aglycones and glucosides in 3-week-old liquid cultures (Akashi at el., 2005). The present study is the first detailed description for testing different MS medium strengths for in vitro curculigoside production from adventitious root cultures. The produced curculigoside content were 76.521 (µg/Treatment) on the ¾ strength of MS medium (Table 2). 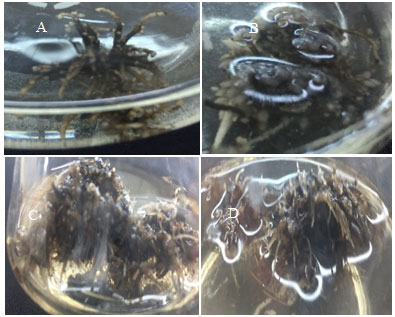 Meanwhile, the root growth (fresh weight and dry weight of adventitious roots) showed a significant reduction in MS medium supplemented with 4% (w/v) sucrose. This may be due to higher osmotic pressure in the medium with the rising of sucrose concentration that gave deleterious effects to the root induction (Cui at el., 2010; Zhang et al., 2012; Tewtrakul at el., 2003). These could be observed through obvious adventitious root growth in Fig. 4. Therefore, it could be specified that reasonably low concentration of sucrose was suitable for adventitious roots growth whereas too low or too high sucrose concentration was not appropriate as it might not supply sufficient energy for root initiation which soon reduces the adventitious roots growth characteristics respectively.

Table 1. The fresh weight and dry weight of adventitious root produced from each treatment with different MS strength, pHs and sucrose concentration after four weeks in culture.

The average score with different letters are significantly different at p = 0.01 level.
z: Letters a, b, c, d in the same column represented the differences among treatments by t Tests (LSD).

Table 2. The Phenolic and Curculigoside contents of adventitious root produced from each treatment with different MS strength, pHs and sucrose concentration after four weeks in culture.

The average score with different letters are significantly different at p = 0.01 level.
z: Letters a, b, c, d in the same column represented the differences among treatments by t Tests (LSD). 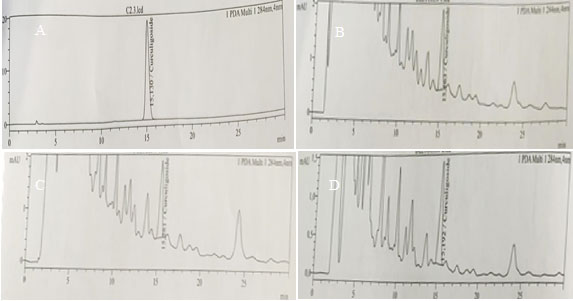 HPLC analysis displayed the presence of curculigoside from the in vitro adventitious roots of Curculigo orchioides. The growth characteristics (biomass) together with phenolic and curculigoside content from the established in vitro adventitious roots of Curculigo orchioides was successfully enhanced by the manipulation of culture conditions involving ¾ strength of MS medium and the addition of 4% (w/v) of sucrose. Hence, it is important to study other strategies in order to enhance the maximum production of secondary metabolites in in vitro systems.

The authors are thankful to the national key laboratory for plant cell technology (Southern), Institute of Tropical Biology for providing necessary facilities. Grateful thanks to the Ho Chi Minh City Department of Science and Technology for the financial assistance to the first author.

Cheng B, Peterson CM, Mitchell R (1992). The role of sucrose, auxin and explant source on in vitro rooting of seedling explants of Eucalyptus sideroxylon. Plant Science, 87: 207–214.

Wu CH, Dewir YH, Hahn EJ and Paek KY (2006). Optimization of culturing conditions for the production of biomass and phenolics from adventitious roots of Echinacea angustifolia, Journal of Plant Biology, 49(3), 193-199.