Effect of Curing Time on the Bond Strength of Orthodontic Brackets Bonded by
Light Cure Resin-Modified Glass Ionomer Cement: An In vitro Evaluation

A high intensity LED light source was used to cure the cements. The Shear-Bond strength of the brackets was evaluated using a universal testing machine. One-way ANOVA test and Tukey multiple comparison tests were done to compare the difference of Shear-Bond Strengths among the groups tested. The average Shear Bond Strength among study groups was 7.64±2.86 MPa. The ANOVA and Tukey multiple comparison tests could not identify a statistically significant difference in Shear-Bond Strengths among the groups. Curing time does not appear to have a statistically significant effect on the Shear Bond Strength of orthodontic brackets bonded using Resin-Modified Glass Ionomer Cements.

Two important discoveries in orthodontics, Buonocore’s discovery of the acid-etch technique and Miura and Newman’s orthodontic bonding, transformed the field (Rossouw 2010; Graber et al. 2016). These steps simplified orthodontic practise while increasing clinical efficiency and effectiveness. It also aided in increasing orthodontic treatment acceptance and set the way for future improvements in the field. Light-cure orthodontic bonding materials were developed at the end of the 1970s (Eliades 2010).

Despite being clinically significant, the bond strength was still lower than that of resin adhesives. For polymerization of adhesives, Light Emitting Diodes (LEDs) based on semiconductors produced from gallium nitride (GaN) are used. Compared to traditional curing lamps, LED lamps provide a number of advantages (Huang et al. 2017).

To estimate the sample size, a similar study in the literature was identified. The sample size was calculated using the G*Power statistical power analysis software version 3.0.10 (Heinrich-Heine-Universität, Düsseldorf). A total sample size of 24 was calculated to have 95% power to detect a difference in means between the groups (Dall’Igna et al. 2011).

A total of 24 premolars were extracted as part of orthodontic treatment were sourced for the study. The teeth were preserved in a formalin solution for 24 hours following extraction, later these teeth were stored saline until they were to be used in the study (Lee et al. 2007; NawrockaA and ukomska-SzymaskaA 2019).

The teeth were then cleaned and mounted onto custom fabricated acrylic mounting jigs. Pumice paste was used to polish the bonding site, etched the teeth for 30 seconds with 37% phosphoric acid, washed for 10 seconds with distilled water, and air-dried for 10 seconds (Gaard and Fjeld 2010; Graber et al. 2016; Shen et al. 2021).

A stainless-steel bracket holding tweezer was then used to place the bracket on the tooth, with enough pressure used to allow the extra resin to gather at the bracket’s edges. The brackets were cured for 15 seconds using the light cure equipment after the extra material was removed (Graber et al. 2016; Shen et al. 2021).

The RMGIC material (GC Fuji ORTHOTM LC, Resin-reinforced light cure orthodontic cement; GC America Inc, USA) was mixed and coated on the bracket base in the proportions prescribed by the manufacturer for the study groups. A bracket holding tweezer was used to place the brackets on the teeth, and enough pressure was applied to allow the excess cement to be collected from the bracket borders. The brackets were cured after the excess cement was removed.

and a wavelength range of (420nm – 480nm). The TURBO P1 high-intensity mode was used in our research, with an output light intensity of

The teeth were then immersed for 24 hours in distilled water at 37°C. At a crosshead speed of 0.5mm/min, the teeth were then subjected to SBS testing on a universal testing machine (Instron® Corporation, MA, USA) (Figure 1). The peak load failure rate was divided by the specimen surface area to get SBS values in megapascals (MPa).

The SBS values were compared between the groups using analysis of variance (ANOVA) and Tukey multiple comparison tests. IBM® SPSS® Statistics software version 23 was used to tabulate and process the data (International Business Machines Corporation, NY, USA). The study’s protocol was approved by the institutional scientific review board.

Figure 1: The SBS of the bonded bracket being tested on the universal testing machine
(Photograph taken by the primary investigator taken during testing). 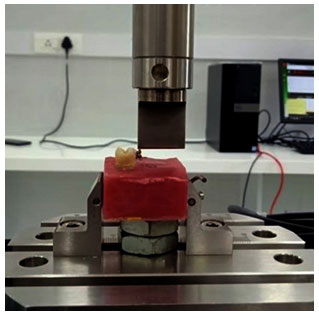 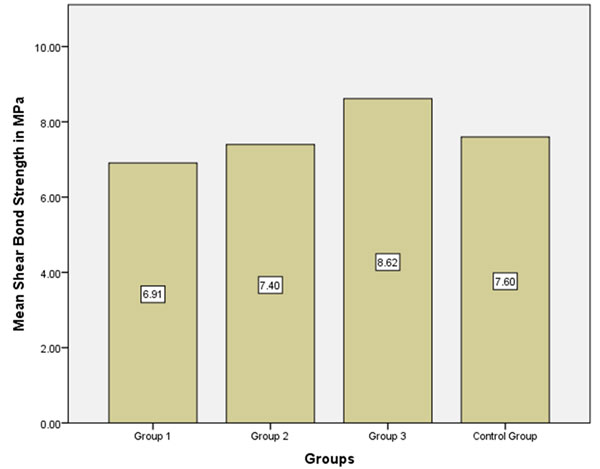 The primary objective of this study was to identify whether curing brackets bonded with RMGICs with the use of high-intensity modes on LED curing lamps that have shorter curing cycles would affect the SBS of these brackets. The shorter curing cycles can increase clinical efficiency and reduce chairside time (Omidi et al. 2018).

In our study, we have an observation that the increase in SBS with the increase in curing time, although the difference wasn’t significant statistically. A 3 and 6 second curing times can offer a balance of both significant SBS for clinical usage and reduced clinical chairside bonding time. Our observation regarding intensity was similar to the results obtained by Cerekja and Cakirer, and Par et al. (Cerekja and Cakirer 2011; Par et al. 2020).

Although resin composite enjoys significant popularity, RMGICs still has its niche in orthodontics, especially in cases where the acid-etch technique isn’t effective such as enamel hypoplasia, dental fluorosis, and amelogenesis imperfecta (Choo et al. 2001; Wiltshire and Noble 2010). RMGICs are used in the indirect bonding techniques of lingual fixed appliances (Komori et al. 2010; Komori et al. 2013). Recently studies that were conducted to study the feasibility of using RMGICs to bond lingual attachments such as buttons, and also the bonding of fixed lingual retainers are showing promising results (Baysal and Uysal 2010; Alkhateeb and Al-Sheakli 2013).

The benefits of the use of RMGICs such as its advantages acting as a fluoride reservoir could help in the prevention of decalcification, reduced enamel damage during removal post debonding (Bishara and Ostby 2010). Improved accuracy being pursued through the techniques of indirect bonding and customized fixed appliances could utilize RMGICs for bonding (Miyashita et al. 2017; Shen et al. 2021).

Also, a study conducted by Mota et al. identified increased anti-microbial activity and reduced plaque accumulation adjacent to orthodontic brackets bonded with RMGICs during the initial stages of treatment (Mota et al. 2008). Although the average SBS of the study group seems low, according to Reynold’s, an SBS of 6 – 8 MPa is adequate for normal clinical use (Eliades and Brantley 2000; Brantley and Eliades 2001).

The lower SBS in the laboratory testing can be a misrepresentation as it does not translate into clinical performance and failure (Graber and Vanarsdall 2000). Silverman et al. reported a bond failure of 3.2% for brackets bonded with RMGICs in an 8-month long in-vivo study (Eliades and Brantley 2000; Brantley and Eliades 2001). Enamel preparation, oral environment, humidity, moisture control, and bracket design could also play a role in SBS (Cacciafesta et al. 2004; Graber et al. 2016; Proffit et al. 2018).

A Limitation of our investigation is its in-vitro nature which cannot reproduce the complex interaction occurring in the oral environment. Numerous authors have pointed out variabilities in laboratory results and clinical observations (Sifakakis and Eliades 2017). Another limitation is the crosshead speed of the universal testing machine set 0.5mm/min. This according to Eliades and Brantley although is generally used does not accurately correspond to the in-vivo scenario due to higher speeds in clinical conditions (Eliades and Brantley 2000).

With all these limitations we can surmise that RMGICs deliver the best of both worlds in terms of clinical performance and can be considered as a suitable alternative to resin composites. The shorter curing cycle with high-intensity LEDs can help reduce chairside time and improve efficiency. Although we have to always to take into account the enormous amounts of research and improvements occurring in the field biomaterials which could still advance and evolve our practice and delivery of care to our patients (Shen et al. 2021).

The findings of the present investigation indicate that curing time has no statistically significant effect on the shear bond strength of brackets bonded using resin modified glass ionomer cements. RMGICs can offer significant advantages and decent clinical performance when used for luting orthodontic brackets. The shorter curing cycle offered by the high-intensity LEDs can help in reducing clinical chairside time, improving clinical efficiency and aid in the delivery of better care to orthodontic patients.

Sifakakis, I. and Eliades, T., (2017). Laboratory evaluation of orthodontic biomechanics: The clinical applications revisited. In Seminars in Orthodontics Vol. 23, No. 4, pp. 382-389.

Silverman, E. (1995). A new light-cured glass ionomer cement that bonds brackets to teeth without etching in the presence of saliva, American journal of orthodontics and dentofacial orthopedics: official publication of the American Association of Orthodontists, its constituent societies, and the American Board of Orthodontics, 108(3), pp. 231–236.

Wiltshire, W.A. and Noble, J., (2010). Clinical and laboratory perspectives of improved orthodontic bonding to normal, hypoplastic, and fluorosed enamel. In Seminars in orthodontics Vol. 16, No. 1, pp. 55-65.