Does the Perception of Self-Ligating Brackets Differ from Conventional Brackets Among Orthodontists?

The purpose of this study was to determine orthodontists’ perception of the reported advantages of self-ligating brackets (SLB) during their daily practice and if there is a relationship between their bracket preference and the advantages of that bracket system. An online survey was distributed to 173 orthodontists and orthodontic residents to compare their perceptions of SLB and CB (conventional brackets). The questionnaire consisted of 2 sections: Section A was composed of questions of the individual practitioner’s characteristics and experience with SLB; Section B assessed a variety of treatment factors, allowing orthodontists to indicate a preference for either SLB or CB based on their experience and perceived clinical results. Orthodontists preferred SLB in initial treatment and shorter adjustment appointments (P<0.0001). CB were preferred for cost, space closure, finishing, and detailing (P<0.0001). Participating orthodontists perceived a clinical difference between SLB and CB. Orthodontists preferred SLB in 7 out of the 12 treatment factors that were evaluated. SLB were preferred mostly for initial treatment progress, shorter adjustment appointments, oral hygiene, and less required extraction. CB were preferred mostly for space closure, finishing, and cost-effectiveness according to the respondents.

Self-ligating brackets (SLB) are a bracket system with no ligatures needed to secure the archwire in the bracket slot (Cacciafesta et al., 2003). The system has a built-in mechanical device to close the bracket slot (Cacciafesta et al., 2003). The engagement between the bracket slot and the archwire is produced by a metal labial door (passive SLB) or by a clip (active SLB), both replacing the steel ligatures and the elastomeric modules (Fleming et al., 2008). There are a number of claimed advantages of SLB over the conventional bracket (CB) – the most important is reduced friction between the bracket slot and the archwire, which results in faster tooth movement (Harradine, 2003; Harradine, 2008; Sfondrini et al., 2018). Also, since it produces less incisor proclination and greater expansion, less extraction is required to relieve crowding, (Birnie and Harradine, 2008). Other reported advantages were improved treatment efficiency, less need for assistance during adjustments, shorter overall treatment time, better patient comfort, oral hygiene, and increased patient adherence and acceptance (Rinchuse and Miles, 2007; Harradine, 2008; Prettyman et al., 2012 Sfondrini et al., 2018; Rathi et al., 2019).

The literature provides conflicting data regarding the treatment efficiency and friction of SLB compared to CB (Harradine and Birnie 1996; Harradine, 2001; Miles et al., 2006; Prettyman et al., 2012). Some studies reported less friction with SLB (Pizzoni et al.,1998; Miles, 2005; Cordasco et al., 2009), while others reported that when angulation and tipping are accounted for, these brackets produce similar or higher friction compared to CB (Bednar et al., 1991; Redlich at al., 2003). Ehsani et al. reported in their systematic review that less friction is produced when small round archwires are used with SLB compared to CB (Ehsansi at al., 2009). However, no sufficient evidence was found when larger rectangular archwires were used in maligned arch (Ehsansi at al., 2009). Several studies on treatment efficiency reported a shorter treatment duration (4-6 months less) and fewer appointments for patients treated with SLB compared to patients treated with CB (Eberting et al., 2001; Turnbull and Birnie, 2007). On the other hand, several studies reported no difference in the total treatment time between SLB and CB (Pandis et al., 2006, Turnbull and Birnie, 2007; Yorita, 2007). Systematic reviews on the efficacy and of SLB reported a lack of evidence for the advantages of SLB over CB (Pandis et al., 2007; Fleming and Johal, 2010; Yang et al., 2017).

Consequently, the popularity of SLB might be caused by effective marketing. The purpose of this study was to determine the perception of the orthodontists on the reported advantages of SLB during their daily practice and if there is a relationship between their bracket preference and the advantages of that bracket system.

Before beginning the study, the study protocol was approved by the Institutional Review Board (18/0407/IRB) of King Saud University, College of Medicine in Riyadh, Saudi Arabia. The questionnaire used in this study was taken from a previous study by Prettyman et al., which was composed of a cover page including the title and purpose of the research project (which clearly explained the utility of participating). The questions consist of two sections: Section A was composed of questions to obtain individual practitioner characteristics and focused on the responding clinician’s experience with SLB; section B assessed a variety of treatment factors, allowing orthodontists to indicate a preference for either SLB or CB based on their experience and perceived clinical results (Prettyman et al., 2012). Each question had a blank section for respondent comments.Assuming 70% of preference for SLB by orthodontists with ± 7% precision and at a 0.05% level of significance, 165 orthodontists were the effective sample required. Due to the nature of an online survey, only 30 to 40 % of responses were expected, hence the enhanced number of orthodontists and orthodontic residents (500 registered in the Saudi Orthodontic society) targeted by email to participate in this study.

Data were analyzed using SPSS version 24.0 (IBM Inc., Chicago, USA) statistical software. Descriptive statistics (frequencies, percentages, and mean) were used to describe the categorical and quantitative variables.  Pearson’s Chi-square test was used to compare the distribution of responses across the categorical variables and to assess the association between the responses of categorical variables. Student’s t-test for single sample was used to compare the mean preference scores with null value of zero.  A p-value of ≤ 0.05 was used to report the statistical significance of findings.

Out of 500 survey invitations, 173 orthodontists completed the survey. 54.9% were female, about 63% were specialists and consultants, 15% were academics, and 22% were postgraduate students.  More than 50% of them had 6 years of practice (or more) in orthodontics. 31.8 % of study subjects held master’s degrees, had board qualifications (49.1%), or completed a PhD program (19.1%). 53.8% of subjects studied in a national program and the remainder studied outside the Kingdom. About 80% of them were working in educational institutes and government hospitals. As part of treatment in their practice 69.9% (121 orthodontists) responded positively that they were using SLB. (Table 1).

Figure 1; Shows the orthodontists’ preference for either SLB or CB. The bracket preferences are shown as 95% confidence. A preference scoring of -1 was used for CB, 0 for no difference, and +1 for SLB. 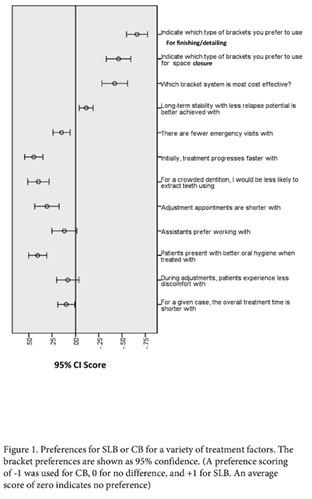 A systematic review by Chen et al. found that shortened chair time and less incisor proclination were the only significant advantages of SLB (Chen et al., 2010). In our study, 47.9 % (P<0.0001) reported shorter adjustment appointments with SLB. The same finding was reported by a previous study with 64% of their sample (P<0.0001) (Prettyman et al., 2012). Since SLB produce less incisor proclination and more expansion in the dental arch posteriorly, it has been claimed that their cases require less extraction (Birnie, 2008; Chen et al, 2010). In our study, 54.5 % of orthodontists reported no difference between the two types of brackets on extraction decisions, which was consistent with previous studies addressing extraction decisions, intercanine width, and incisor proclination (Pndis et al., 2009; Fleming et al., 2009; Prettyman et al., 2012; Jacobs et al., 2014).While our sample preferred SLB for initial alignment, they preferred CB for space closure (60.3%, P<0.0001). Burrow et al. reported faster canine retraction with CB than SLB (Burrow, 2010). Other studies found no differences in space closure between the two types (Miles, 2007; Prettyman et al., 2012; Songra et al., 2014).

When orthodontists were asked about stability, 99% of the respondents reported no difference which agreed with Prettyman et al.’s findings (93% of their sample reported no difference in stability between the two types). A long follow-up retrospective study compared stability between patients treated with CB SLB and reported that there was no statistically significant difference in long-term stability between the two systems (Yu et al., 2014). Most of our sample reported that they prefer CB for finishing and detailing 74.4% (P<0001), which agreed with previous study where 64% (P<0.0001) of their sample preferred it (Prettyman et al., 2012).  Furthermore, finishing and detailing were disadvantages reported from SLB as a result of greater clearance between the bracket a lot and the archwire (Harradine and Birnie, 1996).  SLB are expensive compared to CB. Many orthodontists are looking to increase clinical efficiency to justify the increased cost (Marshall et al., 2010). The majority of our orthodontists (73%) reported that CB was more cost-effective compared to SLB in accordance with Prettyman et al. and Rathi et. al. where their samples reported that CB were more cost effective (70% and 68% respectively) (Harradine and Birnie, 1996; Prettyman et al., 2012).

There are different brands of SLB; there are also active and passive SLB, each has different characteristics that affect clinical performance which was evaluated in this study. This should be kept in mind when interpreting study results, as questions on SLB did not specify name or type. The study evaluated the perception of orthodontists regarding SLB and CB; therefore, the orthodontists’ answers might be biased by the bracket system they use in.

ACKNOWLEDGMENTS: The authors would like to thank the Deanship of Scientific Research at King Saud  University Riyadh Saudi Arabia,  for funding this work through research group number RG-1439-54.

Burrow, S.J. 2009. Friction and resistance to sliding in orthodontics: a critical review. American Journal of Orthodontics and Dentofacial Orthopedics, 135, 442–447.

Harradine, N.W. 2008. The history and development of self-ligating brackets. Seminars in Orthodontics,14,5–18.

Pandis, N., Polychronopoulou, A. & Eliades, T.  2007. Self-ligating vs conventional brackets in the treatment of mandibular crowding: a prospective clinical trial of treatment duration and dental effects. American Journal of Orthodontics and Dentofacial Orthopedics, 132,208–215.