Diversity of Spiders in Microhabitats of a Tropical Reserve Forest of Amravati, Maharashtra, India

Amit B. Vairale1* and Gajanan A. Wagh2

Spiders are among the most abundant insectivorous predators of terrestrial ecosystem and consume large number of preys without damaging the plants. Spiders, are the most common ubiquitous animals on land, constitute an essential portion of the predatory arthropods in several ecosystems. They play an important role in insect pest control without any harm to ecosystem. Spider species abundance in ecosystem can be high as undisturbed natural ecosystem, as they  act as pest control creatures, which feed on  destructive insects. The information on spider’s diversity is becoming increasingly important in the context of a global decline in the spider population. A survey of spiders was carried out in a tropical reserve forest of Pohra Malkhed, Amravati District during the years 2017-19. We have selected five microhabitats for observations in the study area viz; grassland, bush land, woodland, agricultural land and wetlands.

Spiders were collected by adapting standard sampling techniques and collected spiders were photographed and later preserved in 75% ethyl alcohol. Spiders were observed using stereo zoom microscope for study and identification of spiders was confirmed with the help of available keys. During the present study, we have reported 120 species of Spiders belonging to 14 Families and 37 genera, families such as Araneidae, Clubionidae, Eresidae, Gnaphosidae, Lycosidae, Oecobiidae, Oxyopidae, Pholcidae, Salticidae, Sparassidae, Tetragnathidae, Theridiidae, Thomisidae and Uloboridae were abundant. This study provides updated checklist and base-line data of spider fauna from Pohra-Malkhed Tropical Reserve forest  of Maharashtra State India. Moreover, we expect this research to become a suitable milestone by providing credible information to the future analysis on the similar topics.

Vairale A. B, Wagh G. A. Diversity of Spiders in Microhabitats of A Tropical Reserve Forest of Amravati, Maharashtra, India. Biosc.Biotech.Res.Comm. 2021;14(1).

Spiders belong to order Araneae, class Arachinidae and are members of phylum Arthropoda, the largest assemblage of animal with jointed legs and hard exoskeleton. They are the largest group of arachnids comprising more than 44,000 species distributed over 110 families, worldwide as of   the World Spider Catalog .They have unique habitat and they live in almost all the environments. They are the most abundant predator of insects of terrestrial ecosystem and consume large number of preys without damaging the plants.

Spiders are one of the dominant predatory groups found in ecosystems in India. They have special adaptations towards a predatory way of life. Their distensible abdomens enable them to consume large amounts of food in relatively short periods of time, while their rate of predation may greatly increase during short periods when plentiful supply of food is available (Sunderland and Samu, 2000; Jeyaparvathi et al., 2013,  Platnik 2019, Rajeevan et al., 2019).

They have an exceeding high resistance to starvation, which enables them to survive and maintain normal reproduction during periods of low prey availability. Spiders, are the most common ubiquitous animals on land, constitute an essential portion of the predatory arthropods in several ecosystems. Spiders are known to occupying most of the terrestrial habitats. They are generalist predator, which can act against a broader range of insect pests (Sunderland and Samu, 2000).

Spider species abundance in ecosystem can be high as undisturbed natural ecosystem. Spiders act as pest control creature, which feeds on crop destructive insects. Spiders are beneficial bio-control agents of insect pest in the ecosystem and are known to occupy most of the terrestrial habitats. They are general predators, which can act against a broader range of insect pests (Sebastian et al., 2006, Jeyaparvathi et al., 2013,  Wankhade and Manwar 2016).

Spiders are considered to be of economic value to farmers as they play valuable role in pest management by consuming large number of preys in the agriculture fields without any damage to crops. In spite of their importance as a  generalist predator, the role of spiders in ecosystems is usually ignored, mainly because spiders do not fit into the conventional profile of biological control agents. Spiders are among the most abundant insectivorous predators of terrestrial ecosystem.

The current global list of spider fauna has approximately 44,057 of them,  belonging to 3928 genera and 110 families. Spiders are an important but generally poorly studied group of arthropods that play a significant role in the regulation of insect pests and other invertebrate populations in most ecosystems, (Sebastian et al., 2006 Wankhade and Manwar, 2016 and  Rajeevan et al., 2019).

The selected study area is of Pohra – Malkhed Reserve forest, which  is the most diversity rich reserve forests of Amravati District. It is located between N 200 54’ 229’’ and E 770 51’ 104’’ with an elevation on 455 meter. Annual average rain fall is in between 1000 – 1600 mm. Total area under forest is 80 sq km. It is dry deciduous type and mixed type of forest with some grassland forest. More than 275 species of birds are reported form this forest. The other faunal species includes Mammals 17, Reptiles 26, Amphibians 04, Fishes 17, Butterflies 72, and numerous species of insects. This reserve forest has more than 150 plants species (Wadatkar et al., 2014).

The area receives rainfall during southwest monsoon. Average temperature of the district ranges from minimum of 10oC in winter to a maximum of 46oC in summer with the relative humidity varying from 10-15% to 60-95%. The spider inventory studies were conducted from September 2017 to September 2019 in the five different localities of Pohra-Malkhed reserve forest Amravati district from Maharashtra state. We have selected five microhabitats for observations in the study area viz; grassland, bush land, woodland, agricultural land and wetlands (Fig.1). 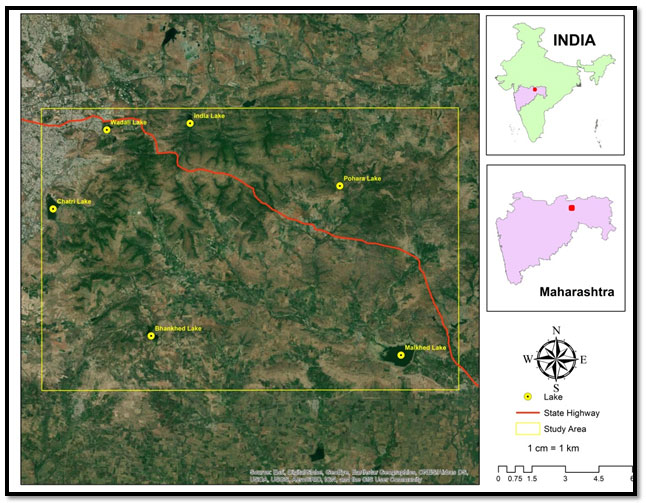 For the sampling method, Spider Inventory work was conducted at the ecosystems by different groups of workers. Four surveys were conducted per season at all study sites. Five 30 x 30 m quadrates were taken for extensive surveys. All surveys were conducted in the morning hours between 6:00am to 10:00am Spiders were collected by adopting standard sampling techniques as described below. 1. Sweep netting: Spiders from herbaceous-shrub-small tree vegetation were collected using standardized insect-collecting net.

This method is used to collect the foliage spider by this method from herbs and shrubs.2. Beating sheets: Spiders from trees and woody shrubs were dislodged and collected on a sheet by beating trees and shrubs with a standard stick. 10 beats per tree or shrub were employed in each quadrate.  3. Active searching and hand picking: Spiders from all three layers were collected using this method. In this method spider specimens were actively searched for 30 minutes per quadrat for searching under rocks, logs, ground debris, and loose dead barks of trees etc.4.

Litter Sampling: Litter i.e. deciduate from the ground was collected by hand and was put in big tray. Litter samplings involved sorting of spiders from litter collection tray.  Collected spiders were photographed in life and later preserved in 75% ethyl alcohol. Identification: Spiders were observed using stereo zoom microscopes for studying identification keys. All specimens were initially separated from other material and identified to the family level. Spiders were identified upto species level using the standard monographs (Majumder and Tikader, 1991).

The increase in the spider’s density suggested that spider’s density was influenced by the increase in prey density. In particular area, the interaction of prey and predator showed a constant numerical interaction about these relationships which was fundamental to biological control. Spiders are considered as the favorable biological control agents in the forest ecosystem (Rajeevan et al., 2019).

Wetland spiders are in large number than after Shrubland and below grassland spider species. Due to grazing habitat the grassland spider species are comparatively lower than wetland and Shrubland. The spider species in debris are very much low and in wetland spiders species are more in numbers. In Western Ghats, Wayanad region, Kerala, India survey total 150 species belonging 73 genera under 20 families were recorded, where spiders of Family Salticidae (44) are dominant where as in our study of Pohra-malkhed reserve forest we were observed total 120Species belonging 37 genera under 14 families, where spiders of Family Araneidae (34) are dominant (Rajeevan et al., 2019). 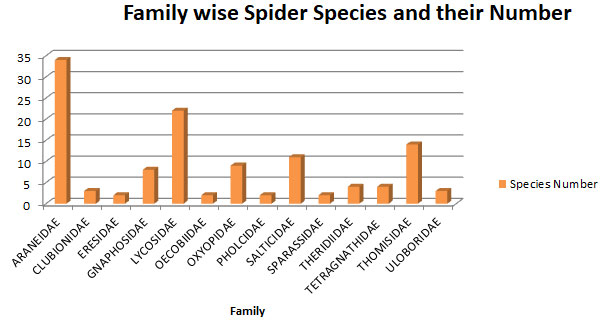 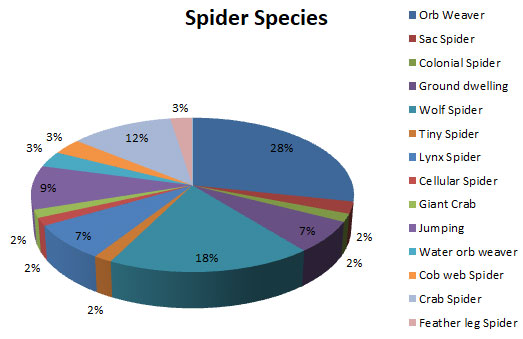 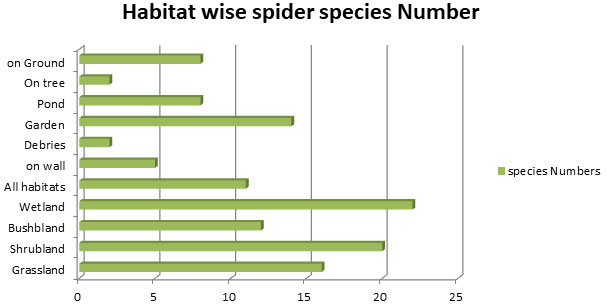 Figure 5: Showing encounter status of Spiders in the  study Area 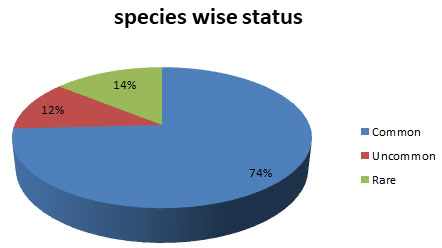 During investigation we have studied 120 species belonging to 37 genera of 14 spider Families. The present work includes the Taxonomic position and list of diversified species of spiders. The major families abundant in this forest are Araneidae 34, Lycosidae 22, Thomisidae 14, Salticidae 11, and Oxyopidae 09. The study shows information related to the species distribution in a particular habitat with response to the environment and availability of food. On the above result and discussion, it is clear that the Spiders are very much important creature and beneficial bio-control agent in the Forest ecosystem. Spiders are an integrated part of all ecosystems and contribute to the balanced ecosystem evidently due to their predatory potential. This study provides updated checklist and base-line data of spider diversity from Pohra-Malkhed Reserve forest in Amravati district of Maharashtra State. Study area shows great diversity of spiders.

The Authors sincerely acknowledge Amravati Forest Department authorities for providing all the needful information regarding the study area. We are very much thankful to t Mr. Shubham Wagh who designed and made available the study area Map.

Authors Contributions: Both the authors have equal contribution in bringing out this research work.

Conflict of Interests: There were no conflict among the interests of the participating authors.