Globally antibiotic resistance has become  a major concern, which warrants the real time monitoring for resistance in very common pathogenic organisms. E. coli is normal micro flora in humans, but sometimes it can be pathogenic. For the observation and increment of antimicrobial resistance among pathogen, E. coli has been one of  the important pathogens.  It is present everywhere in fecal, water, food etc., if resistant E. coli will present in the environment that it can be transferrable anywhere through water, fecal food, animals and humans. This is very dangerous to living beings.  This study was designed on status of antibiotic resistance in E. coli isolates in human kids and animal kids, both.

Newborns are affected more because of poor or lack of immune system. In this study, fecal materials were used as sample material collected from goat kids (0-3 months) and human children (up to 3 years) residing in same local area. Fifteen fecal samples were collected from human children (up to 3 years) and goat kids (0-3 months) in each case to study the risk of transmission of resistance in E. coli isolates. PCR was conducted on genomic DNA isolates for the presence of usp A gene of E. coli. Multiplex PCR were conducted on plasmid DNA isolates for the resistance specific genes.

Molecular resistance results in goat kids isolates showed resistance to antibiotics with tetracycline, sulphonamide, gentamycin, streptomycin and cephalothin to the level of 93.33, 53.33, 46.66, 13.33 & 6.66% respectively, whereas, human E. coli isolates were showed the highest resistance to sulphonamide, Tetracycline and β-lactams were as 53.33, 46.66 and 13.33% respectively but no resistance with  gentamycin and streptomycin. Here, we concluded that humans and animals both were refractory to the various groups of antibiotics. This study will help in making the strategy for prevention or reduction of resistance in public

Childhood diarrhea is a major public health problem and second leading cause of high mortality below 5 year of age children’s. Nearly 1.7 billion cases of childhood diarrheal diseases have been reported every year, killed around 525,000 five year age children, rating for 8% of all deaths worldwide. The deaths from diarrhea mostly occur in children below 2 years of age. Diarrheal diseases have a detrimental impact on child growth and cognitive development. Increased risks of malnutrition in children are associated with diarrheal diseases. The prevalence of the disease remains at an alarming rate where infants and children are unmoving at risk of death and other complications, while over the past two decades the decrease in the episodes of childhood diarrhea is observable globally (Paul 2020).

Also, during slaughtering via fecal contamination, E. coli presence in animal feces allows the entry in the food chain resistant bacteria to antibiotics is present everywhere in surroundings and greatly increased their obstructive effect. Most E. coli are harmless commensal organisms (Zerabruk et al. 2019). E. coli are an opportunistic pathogen that can endure well in aquatic systems and are exceptionally proficient at horizontal gene transfer, which is believed to be the vector for antibiotic-resistance dissemination (Maeusli et al. 2020). The study was aimed to molecular resistance typing of E. coli isolates both in young age human children and in goat kids (1) Frequency of single resistant gene in both (2) Frequency of one or more resistant gene (MDR) in both and (3) which group of antibiotics was showed more resistance.

For identification of bacteria, fecal samples were directly streaked on enriched media brain heart infusion solid media for growth from which a single colony used for further experiments such as lactose fermentation on differential media, streaking on selective media (eosin methylene blue media) for confirmation. To hold E. coli isolates for further process, all isolates were maintained and stored at a temperature of -70°C. Staining was performed from gram staining kit (BD & BBL Difco, USA) as per the method described in the previous studies (Hedge et al. 2013). Biochemical tests were performed from the Himedia kit (HI media, Mumbai, India) and Sigma kits (Japan). DNA from a cultural broth was isolated as per Yang et al., 2008. Isolated DNA was stored at -70° C until their use.

Polymerase chain reaction (PCR) test was performed for the usp A gene of E. coli in Peq lab thermo cycler. The reaction mixture (25µl) were prepared as 22.5 µl Invitrogen master mix (accuprime), 1µl DNA template, and .75 µl of each primer forward and reverse. PCR conditions were as 95°C (5 minute); 30 cycles of 95°C (1 minute), 58 °C (30 seconds) 72°C (1 minute); and a final extension at 72°C (5 minutes) stored at 4°C for infinite. PCR product was seen in the Gel doc machine with the help of gel electrophoresis. 1.3 % agarose gel containing ethidium bromide was prepared in a casting tray. After solidification, PCR products were filled in the well with 6x gel loading dye (Thermo scientific), then run on the power supply at 60 volts for 1 hour in a gel tank filled with TAE buffer.

Fifteen human and fifteen goat kids E. coli isolates processed for Plasmid DNA isolation whereas,  a single colony was inoculated in Luria bertani broth and incubate at 37°C for 3-4 hour. After incubation culture broth centrifuge at 1500 rpm for 5 minutes and supernatant discarded. Pellet was washed with PBS 2-3 times and processed for DNA isolation as per the GSure Mini Kit protocol (GCC, New Delhi). IsolatedNA was stored in-70° C until the use. Polymerase chain reaction (PCR) tests were performed in Peqstar 96 x universal gradient thermocycler (PEQLAB Biotechnologie GmbH, Germany).

The reaction mixture (25µl) was prepared as 10µl emerald master mix (Takara, New Delhi), 1 µl DNA template and 1 µl of each primer forward and reverse and the remaining amount (12 µl) of nuclease – free water. PCR conditions for Cep were as 95°C for 5 min.;30 cycles of 95°C for   1 min, 55°C for 30 sec respectively72°C for 1 min.; and a final extension at 72°C for 5 min stored at 4°C for infinite time. PCR products were seen in the gel doc machine with the help of gel electrophoresis.1.3 % agarose gel was prepared in a casting tray.

After solidification, PCR products were filled in the well with 6x gel loading dye (Thermo Scientific, US). Run on the power supply at 60 volts for 1 hour in the gel tank filled with TAE buffer. For multiplex PCR, the reaction mixture was prepared as listed above, and in reaction mixture added all four genes forward and reverse primer in the same tube and decrease the amount of water.PCR conditions for (Gentamycin- Gen), (Tetracycline – Tet), (Sulphonamide – Sul) and (Streptomycin – Strp) were as 95°C (5 minute); 30 cycles of 95°C (1 minute), 53.5°C (30 second) respectively72°C (1 minute); and final extension at 72°C (5 minute) stored at 4°C for an infinite time. Results were seen as per the previous method.

E. coli were characterized based on cultural, biochemical, and molecular methods in the laboratory. Observed findings on bacteria were as gram – negative and rod – shaped (Fig.1), 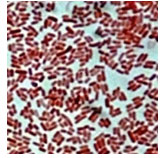 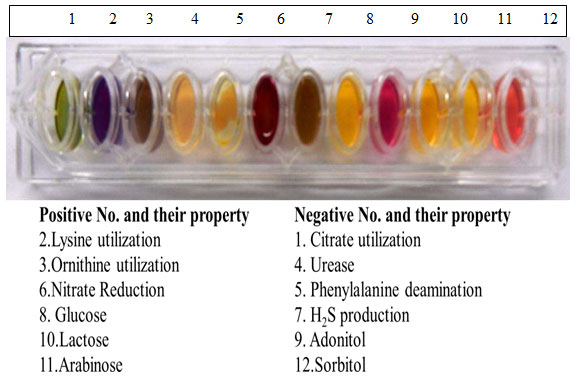 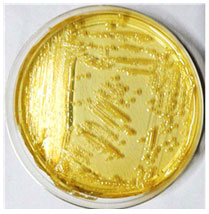 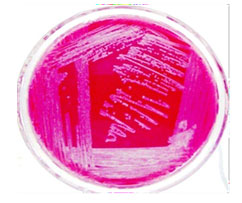 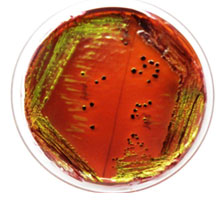 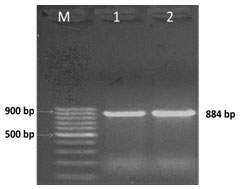 The primers were used in the study for confirmation and resistance as described in the previous studies respectively procured from Eurofins (Table-1) (Momtaz et al. 2012; Mishra et al. 2019).

Table 1. The primers used in the study for molecular and resistance gene confirmation of E. coli 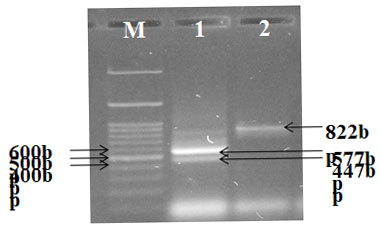 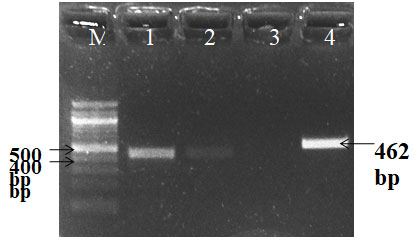 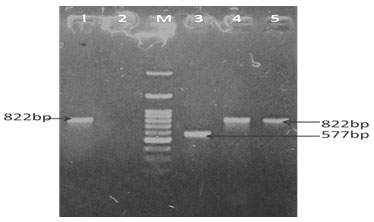 In our results, it was observed that genes associated with resistance to gentamycin, streptomycin sulphonamide, cephalothin, and tetracycline observed in 46.66, 13.33, 53.33, 6.66%, and 93.33% samples respectively in goat kids, Tetracycline, cephalothin, and sulphonamide resistance genes were observed as 26.66, 13.33, and 53.33% respectively in human kid samples and no gene resistance to gentamycin and streptomycin was recorded in humans’ samples (Table 2, 3 & 4 and graph 1, 2 &3). 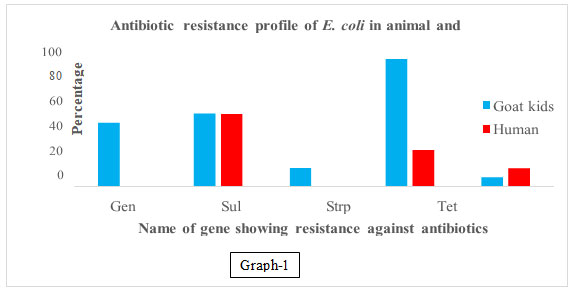 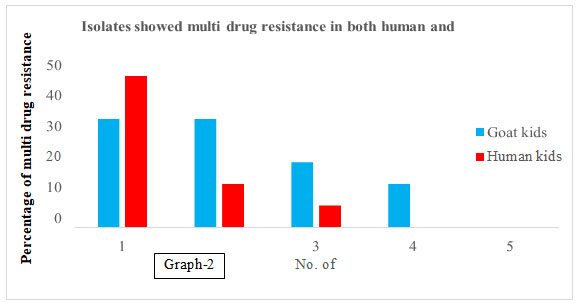 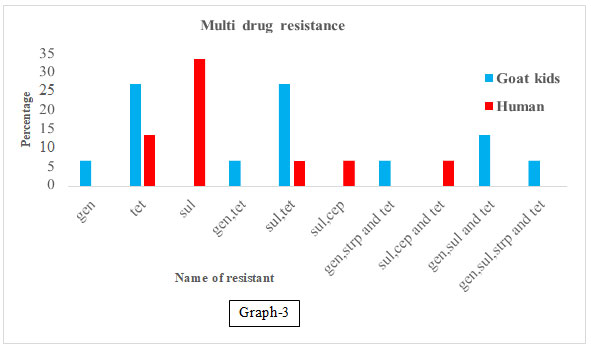 Our results were similar in goat kids except for streptomycin where a high prevalence of tetracycline (36 to 97%), sulfathiazole (50 to 100%), and streptomycin (53 to 100%) resistance was detected in chickens with similar to previous studies (Smith et al. 2007). In a study have reported that tetracycline and sulphonamide resistance in E. coli from slaughtered commercial chickens were 52.6, 47.36 % respectively. They also reported amino glycosides and β- lactams resistance in chickens were nil (Momtaz et al. 2012; Rubab and Oh 2021).

In study, frequency of streptomycin, tetracycline, gentamycin, and sulphonamide genes were in 96.10%, 85.06%, 54.54%, and 40.25%, respectively in E. coli from pediatric patients, theariation in this study may be attributed to the level of exposure to antibiotics in goat kid (Heidary et al. 2013). ported allow frequency of occurrence of genes of tetracycline, aminoglycosides and other β-lactamases genes perform well as signs of emerging resistance in children, unlike the sulphonamide resistance (Singh et al. 2019). The study reported tetracycline, sul1 (for sulphonamide), streptomycin resistance followed by 77.17%, 45.94% and 34.65% from E coli isolate from chicken meat (Rahman et al. 2020).

This work was financially supported by Indian Council of Agriculture Research, New Delhi under AINP-NM Project.