Chikungunya (CHIKV) and Dengue (DENV) are common arboviruses usually found in tropical countries.  To understand the molecular evolution pattern and regulation of viral genome the codon usage analysis serve as an important tool. This study utilized the two important parameters Nucleotide composition (Nc) and Relative Synonymous Codon Usage (RSCU) of codon usage analysis for detailed understanding.  We have processed and analyzed 382 sequence of DENV and 641 sequences of CHIKV for Nucleotide composition (Nc) and Relative Synonymous Codon Usage (RSCU). A comparative analysis of RSCU between both pathogens (DENV and CHIKV) and between vector and host i.e. Ades aegytpti and Homo sapiens was carried out. It is hypothesized because DENV and CHIKV both are sharing common host and vector therefore the findings of our study will provide a detailed insight towards an understanding of molecular evolution between the virus vector and its host.

The study suggests that the codon usage patterns of these viruses are a combination of coincidence and antagonism.The observations recorded indicate that the codon usage pattern of DENV and CHIKV is dominated by mutation pressure under the influence of natural selection from its hosts. In conclusion, the overall codon usage bias is low in DENV and CHIKV i.e. mutation pressure is playing a key role in evolution. To the best of our knowledge, this is the first report describing the comparative analysis of codon usage in CHIKV and DENV genomes. The findings from this study are expected to increase our understanding of factors involved in viral evolution, and fitness towards hosts and the environment.

Dengue virus (DENV) is a major threat to worldwide human health. Over 50 million cases are reported per year, it is most prevalent in tropical and sub-tropical countries, itconsists of four serotypes, DENV1 – DENV4. DENV is a member of the Flaviviridae family (Chen et al.,2013; Dwivedi et al.,2017.). The transmission of the virus to humans is by a vector that isamosquito, primary vector Aedesaegypti,and secondary vector Aedesalbopictus. The viral genomes consist of a positive single-stranded RNA encoding for ten proteins; three structural proteins capsid (C), membrane protein (M), envelope protein (E), and seven non-structural proteins, NS1, NS2A, NS2B, NS3, NS4A, NS4B, and NS5. These proteins are translated as a polyprotein, which is cleaved into individual proteins during maturation by the host proteases, ( Behura and Severson, 2013,  Sim et al.,2015, Sim and Hibberd, 2016 Pollett  et al.,2018).

Chikungunya virus (CHIKV) is a member of the Togaviridaefamilygenus alphavirusit is a single stranded, enveloped, positive-sense RNA virus (Galán et al.,2015). The genome is 12 kb in size and contains two open reading frames encoding non-structural and structural proteins CHIKV has caused several outbreaks in several Southeast Asian countries and emerge as a severepublic health concern (Dutta et.al.,2018). It is also anarthropod-borne virus, the mode of transmission is the mosquitoes of the Aedes spp. where Aedesaegypti and Aedesalbopuctus serve as primary and secondary vectors and humans serve as hosts similar to the DENV virus (Volk et al.,2010, Wimalasiri et al.,2019).

All amino acids, except methionine and tryptophan, are coded by more than one codon. This phenomenon of using more than one codon for each amino acid is termed as synonymous codon usage (Jun-Jun et al.,2013). The synonymous codons do not occur equally they follow a pattern in which some codons are preferred over others and this is termed as codon usage bias (Zhou et al.,2012; Hemert and Berkhout,2016). Several of factors are known to add to codon usage bias, such as translational and transcriptional selection, mutational bias, protein structure, RNA stability, GC content, tRNA abundance, etc.

The literature studies reflect that much research work has been done for the codon usage analysis of CHIKV and DENV independently, though the CHIKV and DENV are members of two different families but share common host and vector. And this important correlation between the two pathogen is almost not considered.  There is a lacuna towards the understanding between the two pathogen and their vector and host.Very few studies are available which address the three components of transmission cycle of virus i.e.  virus, vector and host in the study, but again not for the pathogens from different origin but sharing common host and vector.

Sequence data: Sequences: Complete genome sequences of Dengue (DENV-1 90, DENV-2 94 and DENV-3 105, DENV-4 93) and CHIKV (641) viruses were downloaded from the National Centre for Biotechnology (NCBI) database (http: //www.ncbi.nlm. nih.gov) in FASTA format. The accession numbers of the selected genomes were listed in the table (Supplementary Table.1).

Compositional Analysis: To understand the frequencies of occurrence of each nucleotide composition analysis was conducted. The overall frequency of occurrence of the nucleotides (A %, C %, U %, and G %) was calculated along with the frequency of each nucleotide at the third site of the synonymous codons (A3, C3, U3, and G3). The termination codon UAA, UAG, and UGA do not encode any amino acids and codons AUG and UGG are the only codons for Met and Trp, respectively, therefore, these five codons are excluded from the analysis(Lobo et al.,2009; Feng et al.,2013; Hemert and Berkhout 2016).

Where gij is the observed number of the ith codon for the jth amino acid, which has ni types of synonymous codons ( Zhong et al.,2007; Mune et al.,2017).

Table 1.The mean of nucleotide composition analysis of DENV 1-4  and CHIKV genomes (%)

Figure 1: Comparative Analysis Nucleotide Composition of all four serotypes of DENV and CHIKV Genomes: common pattern is observed in both the viruses the mean A% was the highest, followed by G%. 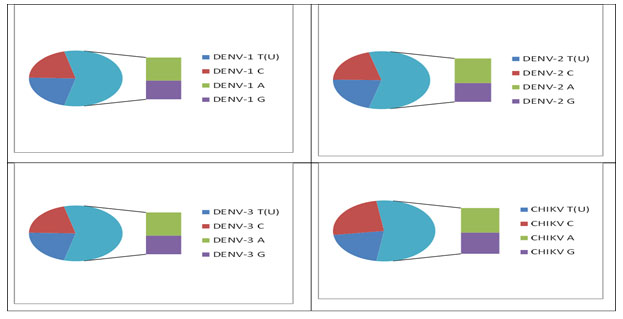 To understand the patterns of codon usage and evaluate the effect of nucleotide composition on codons usage pattern, we performed RSCU analysis and calculated the RSCU values (Table 2). Among the 16 most preferred codons in DENV genomes, six (UUG, CUG, GUG, GCC, AAC, and GAC) were G or C-ended (C-ended: 3; G-ended: 3) and the remaining ten (CUA, AUA, UCA, CCA, ACA, GCA, AAA, GAA, and AGA, GGA) were A-ended codons. There is no preferred codon ending with U. We observed that DENV exhibits higher codon usage bias towards G/C- and less towards A-ended codons.

Among 59 codons, six codons had RSCU value greater than or equal to 1.6 are over represented codons AGA (Arg), GGA (Gly), CCA (Pro), UCA (Ser), ACA (Thr), GUG (Val). And five under-represented codons had RSCU value equal to or less than 0.6 GCG (Ala), CGU (Arg), CCG (Pro), UCG (Ser), ACG (Thr). We observed that the codon usage pattern of virus and human host is quite similar in comparison to the codon usage pattern of virus and vector (Figure 2).

This indicates that the G/C content at the third position of the codons influences the codons usage patterns. Among 59 codons, only CUG (Leu) and AGA (Arg) had RSCU value greater than or equal to 1.6 are overrepresented codons. However, the underrepresented codons (RSCU,0.6), were identified as follows: UUA (Leu), GCG (Ala), and CGG (Arg). We observed that the codon usage pattern of virus and human host is quite similar in comparison to the codon usage pattern of virus and vector (Figure 2). 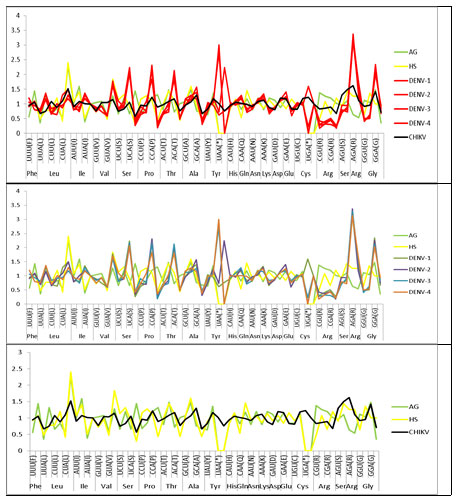 DENV and CHIKV both viruses belong to different families but share a common vector and host. When we analyzed the most abundantly used codons we observed a common pattern is both the viruses. The viruses exhibit a higher codon usage bias towards G/C- and less towards A-ended codons (Figure 2).

In this study, the comparative analysis of RSCU of DENV and its vector and host, CHIKV and its vector and host, and DENV and CHIKV was done to understand the patterns of codon usage and evaluate the effect of nucleotide composition on the codons usage pattern. Both the viruses exhibit a higher codon usage bias towards G/C- and less towards A-ended codons. This suggests that GC composition plays an important role in crafting the codon usage pattern of both viruses. The findings propose that even though RNA viruses have a high mutation rate, DENV and CHIKV has evolved with a moderately stable genetic composition at specific levels of codon usage.

However, The information from this research may not only help to understand the molecular evolution of these two viruses, but it will also contribute to the further development of the virus vaccine and antiviral drug (from Genome to Hit).To achieve the goal for viruses ; the preferred codon information is going to play a key regulating role to develop a therapeutics.  It is well stated that the preferred codon are conserved throughout the species, whereas the remaining genome content of virus is highly unstable that is susceptible to the environment.

Ethical  Statement: This article does not contain any studies with human participants or that were performed on animals.

Butt A. M, Nasrullah I and Tong Y (2014) Genome-wide analysis of codon usage and influencing factors in Chikungunya viruses  PloS one  vol 9 p 90905