The results indicated that CQE lowered SBP, DBP, MABP and heart rate to varying degrees in normotensive rats compared to control groups. In case of angiotensin II-induced hypertension, CQE administration resulted in substantial decrease in SBP, DBP, and MABP which were raised by Ang II. CQE reduced SBP, DBP, and MABP by 12, 59, and 11%, respectively. It is worth noting that, while SBP was not brought down to baseline levels by CQE, DBP was, suggesting significant hypotensive/antihypertensive activity of CQE. Further research is required to determine the molecular mechanism of C. quadrangularis extract’s hypotensive/antihypertensive action and to conduct clinical trials to establish its optimal use as an antihypertensive therapeutic.

ANTIHYPERTENSIVE, AT1, AT2, HADJOD, HYPOTENSIVE

Hypertension is a major cause of death from cardiovascular complications such stroke, chronic kidney disease, and congestive heart disease. Despite many pharmacotherapies and lifestyle changes, the treatment of hypertension is still being investigated and remains difficult, with blood pressure not remaining at a normal level in around half of hypertensive patients. Alternatively, researchers have led concerted efforts to explore novel therapeutics with hypotensive/anti-hypertensive properties from medicinal plants/herbs. As an outcome, some of these medicinal plants with acclaimed hypotensive/antihypertensive properties have been validated, while others have been dismissed (Etuk 2006; Al-Anbaki et al. 2021; Azizah et al. 2021; Verma et al. 2021).Cissus quadrangularis Linn. (Vitaceae), often known as “bone setter” in Ayurvedic medicine owing to its bone fracture healing properties, is a tropical perennial plant found in India, Sri Lanka, Malaysia, Java, and West Africa. It is a perennial climber with four wings internodes and a slender, fleshy fibrous, smooth stem (Sundaran et al. 2020; Kaur et al. 2021).

Despite the fact that researchers have investigated into several pharmacological effects of C. quadrangularis, some of which have even entered clinical trials, its potential use against hypertension has yet to be revealed. Thus, the potential of C. quadrangularis aqueous extract to modulate blood pressure and heart rate in urethane-anesthetized rats was investigated against angiotensin II-induced hypertension.

C. quadrangularis aerial parts were collected from Mysore region in India, subsequently identified by Dr. Sharanappa and a reference specimen was retained in the laboratory. Normal saline, heparin and adrenaline were purchased from local pharmacy. Angiotensin II and urethane was procured from Sigma Aldrich, USA. All of the other chemicals and reagents used in the analysis were of the finest analytical purity.The sample was washed with running water to eliminate dirt before being spread out on large trays. The trays were placed in a shady area for 12 hours before being chopped into small pieces. The chopped pieces were then dried for 24 hours in a hot air oven set at 60°C. In a cyclonic laboratory blender, the dry material was pulverized until it passed through a 60-mesh screen.

The powder was kept in an airtight container in the refrigerator for subsequent use. C. quadrangularis extract (CQE) was prepared by mixing the powder with hot distilled water at 70°C (1:8 w/v) and extracting it using a mechanical shaker for 24 hours. The extract was then filtered, and the residue was re-extracted with hot water for 12 hours before being filtered again. Both filtrates were pooled and evaporated in a flash evaporator set at 60°C to yield CQE, which was stored in an airtight container in the refrigerator for future use.

The hypotensive/antihypertensive activity of C. quadrangularis extract was evaluated using the procedure reported by Mohebbati et al. (2020) with some modifications. An intraperitoneal injection of urethane (1.25 g/kg) was used to anesthetize the animals. The rat’s necks and inguinal regions were shaved using an electric shaver after the anaesthesia was confirmed. The jugular vein was surgically cannulated for medication delivery, while the left carotid artery got PE-50 tubing cannula to record cardiovascular data. The arterial cannula was connected to a blood pressure transducer (SS13L) and the venous cannula to a syringe using a three-way plastic stop cock and a stainless-steel needle at the end of the PE tubing. Before cannulation, both cannulae were prefilled with heparinized saline.

Hypertension is a major risk cardiovascular risk factor in reducing people’s life expectancy and quality of life. Because the activation of the renin-angiotensin system (RAS) is thought to be a key precipitating factor in hypertension, medications that suppress the RAS may be therapeutically valuable (Chen et al. 2018). Because many medicinal plants have been shown to regulate the RAS system to varying levels (Etuk 2006), the current study explored into the hypotensive/antihypertensive potential of C. quadrangularis aqueous extract against angiotensin II-induced hypertension in urethane-anesthetized rats.

*Values were represented as mean ± SD (n=6). Values with different superscript letters in columns differ significantly from each other at p ≤ 0.05.

In control group, wherein saline was injected did not elicit any significant changes in any of the cardiac parameters, whereas the injection of C. quadrangularis extract at a dosage of 10 mg/kg significantly (p<0.05) lowered SBP, DBP, MABP and heart rate to varying degrees in the CQE group. In group 3, conversely, angiotensin II (0.5 g/kg) injection resulted in a substantial rise in SBP, DBP, and MABP to the extent of 67, 59, and 54 percent, respectively, while heart rate remained unchanged compared to control group. CQE efficiently counteracted the blood pressure rising effect of angiotensin II in group 4 rats when CQE (10 mg/kg) was injected with angiotensin II (0.5 g/kg). CQE reduced SBP, DBP, and MABP by 12, 59, and 11%, respectively. It is worth noting that, while SBP was not brought down to baseline levels by CQE, DBP was, suggesting significant hypotensive/antihypertensive activity of CQE (Fig: 1). 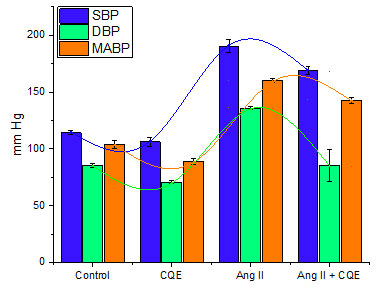 These extracts have been shown to contain a wide range of chemical compounds, including flavonoids (quercetin, kaempferol, daidzein, and genistein), triterpenoids (friedelin, β-amyrin and 7-oxo-onocer-8-ene-3 β 21-α diol), stilbene derivatives (quadrangularin A, quadrangularin B, quadrangularin C, resveratrol piceatannol, pallidol, and parthenocissus), iridoids (6-O-[2,3-dimethoxy]-trans-cinnamoyl catalpol and 6-O-meta-methoxy-benzoyl catalpol, picroside and pallidol), phytosterols (β-sitosterol, β-sitosterol-O-b-D-glucoside and ketosetosterol), phenolic compounds and tannins, the majority of which have been associated with significant antioxidant and antihypertensive activities (Amarowicz 2007; Wang et al. 2007; Frombaum et al. 2012; Rodrigo et al. 2012; Kucharska et al. 2017). As a reason, the hypotensive/antihypertensive effect of CQE can be attributed to the antioxidant compounds’ blocking of angiotensin II binding to angiotensin receptors.

Azizah, N., Halimah, E., Puspitasari, I. M., et al. (2012). Simultaneous use of herbal medicines and antihypertensive drugs among hypertensive patients in the community: A review. Journal of Multidisciplinary Healthcare, 14, 259-270.

Oben, J., Kuate, D., Agbor, G., et al. (2006). The use of a Cissus quadrangularis formulation in the management of weight loss and metabolic syndrome. Lipids in Health and Disease, 5, 24.