The haphazard application of chemical fertilizers and pesticides causes tremendous damage to ecosystems and all biota. One of the most effective ways to tackle the threat is to use biofertilizer. Plant growth promoting bacteria (PGPB) are an important bacterial source for microbial fertilizers that can boost agricultural yields by encouraging plant growth. Bacterial isolates isolated from Saurashtra region, Gujarat, India were analysed for their capability to solubilize inorganic ‘P’ from tri calcium phosphate and production of indole acetic acid (IAA) quantitatively by bacterial. Production of ammonia, siderophore and hydrogen cyanide (HCN) by selected bacteria isolates was analysed. Biochemical characterization of selected bacterial isolates was done using Vitek 2 Compact system. Isolate GFS15C2 showed highest amount of phosphate solubilization, followed by isolate GFS07C1 and GFS01C1. Bacterial isolate GFS15C2 produced highest amount of IAA. All bacterial isolates were able produce ammonia.

Eight bacteria isolates were be to produce HCN. Siderophore was produced by 14 bacterial isolates.  In biochemical characterization all the bacterial isolates were able to use D-glucose. Based on biochemical characters clustering of bacteria isolates was done using Paleontological statistics software package for education and data analysis(PAST). Using cluster analysis by euclidean distance method based on biochemical characterization isolates GFS16C2 & SCS12C3 was found to have distinct characters than other isolates. The present study attempts to characterize PGPB which could be harnessed to improve plant growth. Several phosphate solubilizers and IAA producers also showed production of siderophores and HCN which suggests that these organisms do possess biocontrol ability. These PGPB microbial inoculants can be utilized to improve agricultural systems or as an alternate means of environmentally friendly plant disease biocontrol.

Application of haphazard use of chemicals fertilizers andpesticide leads to incredible harm to ecosystems and all biota.Alternative to these chemical applications, biofertilizer areone of the best solutions to combat the hazard. These microbes can be used as both plant growth promoting bacteria and as biocontrol agent for suppression of plant pathogenic microbes(Kour et al. 2019; Sharma et al. 2020). The most commonly known plant growth promoting bacteria are Bacillus, Rhizobia, Pseudomonas, Azotobacteretc. PGPB, it has the ability to fix nitrogen fixation to solubilize phosphate, iron chelation by siderophores and phytohormone production whereas, being a biocontrol agent, it has the ability to produce HCN and secondary metabolites to suppress the growth of plant pathogenic microbes(Backer et al. 2018; Swarnalakshmi et al. 2020).

Hence, its multifaceted capability makes it appropriate as biofertilizer and biocontrol agent in agriculture field. PGPB compounds can exhibit a number of features that influence plant growth, either directly or indirectly. Auxin, gibberellin, ethylene, and other plant growth regulators are produced, as are siderophores, HCN and antibiotics, as well as phosphate solubilization(Suresh et al. 2020; Rawat et al. 2020).The synthesis of siderophore for iron sequestration and the auxin IAA, which has been linked to plant growth promotion, notably root initiation and elongation, is one of the most significant processes involved in plant promotion(Prasad et al. 2019; Morales-Cedeno et al. 2021).

Microbial inoculants provide a number of benefits over chemical inoculants(Vassilev et al. 2020).They are environmentally friendly, sound sources of renewable nutrients that are necessary for soil health and life(Basu et al. 2021). They also fight abiotic stressors and have antagonistic action against a variety of crop diseases. Based on their capacity to absorb nutrients from the soil, fix atmospheric nitrogen, induce nutrient solubilization, and function as biocontrol agents, a variety of microbial taxa have been commercially employed as effective biofertilizers(Tabassum et al. 2017;Kenneth et al. 2019; Kumar et al. 2021).Plant growth promoting bacteria were isolated from the Gir forest coastal region of Saurashtra, Gujarat. using the soil samples by screening for nitrogen fixing bacteria and further screening was done for phosphate solubilizing bacteria and production of IAA producing bacteria was also done (Kaneriya et al. 2021).

The production of siderophore with the universal chemical test method for quality detection of siderophore production in fluid crops were tested for bacterial isolates (Schwyn and Neilands 1987). This experiment was carried out using a modified method that was providedby Hu and Xu(Arora and Verma 2017). For inferring the presence of siderophore, the tubes were monitored for colour changes from dark blue to light blue or orange. Uninoculated medium was used as control.Production of IAA was estimated by growing the bacterial isolates in yeast extract-mannitol broth and minimal medium supplemented with 200 µg/ml L-tryptophan, which acts as a precursor for IAA synthesis at 28 ± 1⁰C.

After 48 hours, 5 ml cultures were centrifuged at 10,000 RPM for 15 minutes at 4 ± 1⁰C and the supernatant was collected(Pereira et al. 2019).Experiments were set in triplicatesto analyse the production of IAA. Development of pink colour indicates production of IAA and its optical density was recorded at 530nm using UV-1800 UV-VIS Spectrophotometer, Shimadzu. Concentration of IAA produced was estimated against standard curve of IAA (Hi-media) in the range of 10–100 µg /ml.Selected bacterial isolates were analysed for the production of ammonia in peptone water. Cultures were inoculated in 10 ml peptone water and incubated at 28±2 °C for 48 to 72 hours.

Nessler’s reagent (0.5 ml) was added in each tube.Ammonia production was indicated by the change in colour from brown to yellow(Cappuccino and Welsh 2017).Selectedbacterial isolates were analysed for the production of hydrogen cyanide by the method given by Lorck (1948). Parafilm was used to seal the plates, which were then incubated at 28±2 °C for 4 days. HCN production was indicated by the colour changing from yellow to red(Slama et al. 2019).Biochemical characterization of the selected bacterial isolates was done using Vitek 2 compact, Biomerieux Inc.All the descriptive statistics testswere performed using XLSTAT for Windows (Fahmy 2016). Graphs were created using Microsoft Office Excel 2019. Clusteranalysis based on Euclidean distances was done using PAST software by (Hammer et al. 2001).

The present study reflects the work done to characterize plant growth promoting parameters isolated from forest and coastal regions of Saurashtra, Gujarat and analyse their biochemical parameters. For soil microorganisms, rhizosphere is appropriate endurance specialty because of rich supplement accessibility(Khatoon et al. 2020). Community of life forms living in a specific specialty is explicit and subject to the actual elements and ecological variables(Mony et al. 2020).

Solubilization of Phosphate by bacterial isolates and pH reduction of the medium for was analysed for 10 days and of which values of P solubilized on day 5 & 10 are tabulated in the Table 1. Graphical representation for P Solubilization by bacterial isolates from day 1 to day 10 has beengiven in figure 1. It was observed that over a period of time, the un-inoculated medium detected no soluble P and no drop in pH as well. In case of inoculated medium solubilization of the phosphate was observed with the decrease in pH. Bacterial isolate GFS15C2 showed highest amount of phosphate solubilization, followed by isolateGFS07C1, GFS01C1, GFS16C1, GFS16C2, GFS11C1, SCS03C1 and SCS12C4. Isolate GFS13C1 showed lowest phosphate solubilization.Marra et al. (2019) reported that all separates which solubilize tri-calcium phosphate (TCP) in fluid and medium could create natural acids causing the pH of the medium acidic.Similarly, all of the isolates that can solubilize TCP in the current investigation demonstrated a decline in the pH of the medium.Similar observation was made Lebrazi et al. (2020). This drop in the pH is supported by secretion of different natural acids by use of sugar(Marra et al. 2019; Lebrazi et al. 2020). 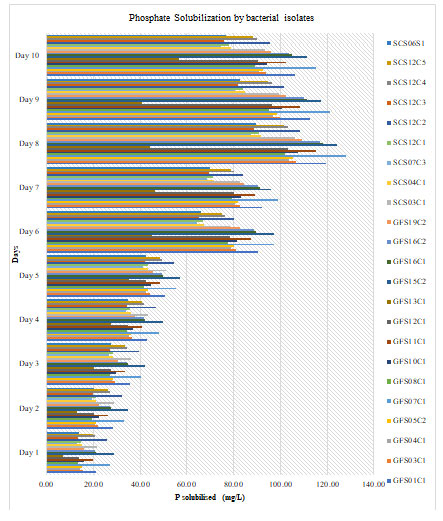 Bacterial isolates SCS12C1 lowest.IAA synthesis is an important characteristic of PGPR because this phytohormone allows the plant to form a well-organized root system, which improves nutrient absorption(Kumar et al. 2019).  IAA have been reported to stimulate the growth of roots and leaves in plants thereby alleviating plant productivity (Bhat et al. 2020).Among the all the bacterial isolates bacterial isolate GFS15C2 was found produced highest IAA. The IAA produced by bacteria varies between different species and strains. This variation is possibly affected by several factors, such as physiological condition of bacterial isolates, growth stage, and substrate availability(Lebrazi et al. 2020a). 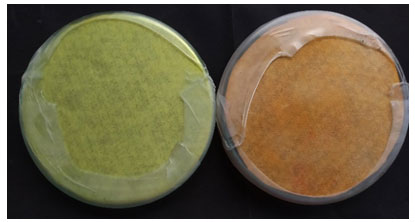 Cluster analysis was performed to study the biochemical relatedness based of biochemical tests among the bacterial isolates, using PAST. ver. 4.07b.(Hammer et al. 2001; Athira and Anith 2020).

Using cluster analysis (figure 4) by euclidean distance method based on biochemical characterization isolates GFS16C2 & SCS12C3 have distinct characters than other isolates. GFS01C1&GFS03C1 and GFS19C2&SCS03C1 are more related as compared with other isolates.Individual bacteria cells specialize into unique tasks randomly and independently of one another in some bacteria species by random variations in each cell’s metabolic processes.In Bacillus subtilis, for example, whether a cell makes and secretes protease is decided at random(Bettenworth et al. 2019; Li et al. 2021). However, the use of 16S rDNA amplicon sequencing can addressthis drawback(Liu et al. 2021).

Figure 4: Clustering of the bacterial isolates using based on Euclidean distance tree constructed using PAST. 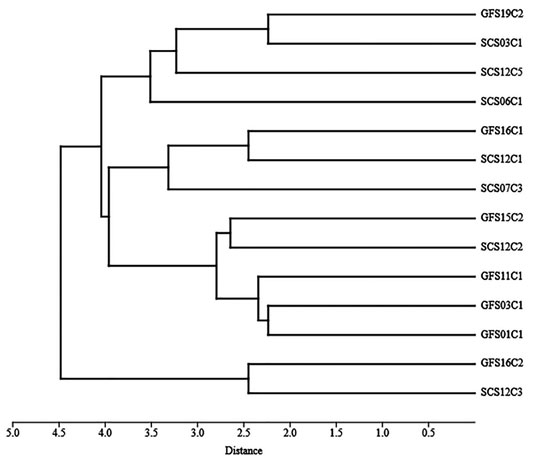 The findings of the present study indicate the quantitative analysis of phosphate solubilizing capability and IAA synthesis by bacterial isolates. The current study attempted to identify plant growth enhancing microorganisms that may be harnessed to increase plant development. Several phosphate solubilizers and IAA makers also produced siderophores and HCN, suggesting that these organisms are capable of biocontrol. As a result, it can be deduced that some of the screened isolates have a strong capacity to operate as PGPR. Identifying microorganisms and using seed tests can also help us understand dynamics.

Conflict of Interests: Authors declare noconflicts of interests to disclose.

Schwyn, B. and Neilands, J. B. (1987). Universal chemical assay for the detection and determination of siderophores. Analytical Biochemistry, 160, 47-56.