Polyethylene has become a serious environmental pollutant due to its highly non-biodegradability and has gained the attention of several researchers to find a way to degrade it. Here we have tried to degrade plastic using soil bacteria isolated from plastic dumping sites. A total of 20 bacterial strains were isolated from five different locations. Plastic degrading ability of all selected bacterial strains was checked on nutrient agar media containing 0.1% plastic powder. After primary screening, three bacterial strains P1, P5 and P11 were selected on the basis of growth behavior. Then these three strains were checked for their ability to degrade plastic. The biochemical and morphological characterization showed that the isolates with high degradation ability belong to genus Staphylococcus.

Polyethylene is gaining much importance because of its properties like non-biodegradable, durable, light weight, low cost, strong and resistant to environmental changes ( Gnanavel et al. 2012 Asmita 2015). They have many benefits as compared to other materials which make it suited for a variety of applications. But due to improper recycling and waste management system, it is creating environmental pollution (Hemashenpagam et al. 2013; Jayasiri et al. 2013; Gajendiran et al. 2016) and responsible for death of thousands of sea lives every year due to intake of plastic (Palmisano and Pettigrew 1992). Presently, we can get rid of plastic by incineration, dumping and recycling but all these methods fail to manage due to surplus demand in various sectors. So we have to focus on some ecofriendly methods. These methods include photo-oxidation, thermo-oxidative degradation and biodegradation. Out of these methods, biodegradation is considered as the cheap, environment friendly and most acceptable method for plastic management.

After biodegradation, photo-oxidation can be considered as it utilizes UV radiations and microbes. Apart from these two methods, thermo-oxidation is not used commonly due to high requirement of energy (Yang et al. 2011). During biodegradation, microbes get attached to microbial surface form colonies and start process of enzymatic degradation. Microbial enzymes break down the hydrolytic bond of polymer and convert it in monomer, dimer or trimer which is a simple form. Microbes again degrade it by aerobic and anaerobic metabolism and form carbon dioxide, water and methane (Tokiwa et al. 2009) as end product. Molecular weight of polymer plays an important role in its degradation as the physical properties of the polymer are determined by its molecular weight. With the increase in the molecular weight, degradability gets difficult. Some microbes like Pseudomonas  can degrade styrene which is also responsible for triggering their metabolism (O’ Connor et al. 1995).  Some other microorganisms like Micrococcus luteus and Masoniella were also identified for similar type of degradation (Sivasankari et al. 2014).

So, to address such severe environmental problems, many researchers all over the globe are showing their interest in the optimization and production of biodegradable plastic (Jangra et al. 2018). Efforts towards conversion of plastic into usable forms like compost are also in progress (Albertsson et al. 1987). Many microbial species are studied by researchers which are able to degrade present polymer by using it as a substrate. It includes Pseudomonas, Streptococcus, fungus, Micrococcus and many other microbial species are known for their plastic degrading ability (Swift 1997). Therefore, researchers  are trying to find out the ability of microbial enzymes for polymer degradation. The present investigation was conducted in the Department of Biotechnology, Government College, Hisar with a major goal to explore the natural properties of microorganisms isolated from plastic dumped soil for degradation of plastic.

Isolation: In a conical flask, 99 ml of distilled water was taken. Then 1.0 gram of soil and plastic samples were transferred into it. The mixture was then serially diluted (Cappuccino and Sherman., 1996). Dilutions were made by adding 9 ml of sterile water to make 1:10 dilution, adding 1ml of the 1:10 dilution to 9ml of sterile water makes a 1:100 dilutions and so on.

Medium for testing biodegradation of plastics: The Bushnell and Haas agar (Bushnell et al., 1941) was used for testing the ability of microorganisms in degrading plastics. The media was prepared by adding 0.2 g of MgSO4, 1.0 g of KH2PO4, 1.0 g of K2HPO4, 1.0 g of NH4NO3, 0.02 g of CaCl2, 0.05 g of FeCl3, and 20 g of agar into 1000 ml of distilled water. One-gram plastic powder (polythene/polypropylene) was added into the Bushnell and Haas agar medium to make a final concentration of 0.1% (w/v) with pH 7.0 + 0.2. Media was then autoclaved and poured into petri plates for solidification.

Petri plate method for isolation of bacteria: For the isolation of bacteria, prepared dilutions were spread on the petri plates. Further the cut polythene strips were placed on the media and incubated at 37oC until the growth observed in the plates. After period of incubation the diameter of bacterial growth for each isolate was determined.  Colonies were selected and purified and stored for further use.

Primary Screening of LDPE degrading bacteria in liquid media: Twenty- five ml of liquid media, was dispensed in 100 ml Erlenmeyer flasks and supplemented with 0.1% plastic powder as a substrate and sole source of carbon. Selected bacterial isolates were inoculated into the flask. All flasks were incubated in incubator at 30⁰C for 7 days. The bacterial growth of isolates was determined at 600 nm by measuring the OD using U.V-visible spectrophotometer.

Determination of Weight Loss: Pre-weighed discs of 1-cm diameter prepared from polythene bags were aseptically transferred to the conical flask containing 50 ml of culture broth medium, inoculated with different bacterial species. Control was maintained with plastic discs in the microbe-free medium. Different flasks were maintained for each treatment and left in a shaker. After one month of shaking, the plastic discs were collected, washed thoroughly using distilled water, shade-dried and then weighed for final weight. From the data collected, weight loss of the plastics was calculated. Experiments were also done on agar plate using plastic discs.

The starting materials used for identification of polythene degrading bacteria were decomposed waste and polythene wrapped with soil (Singh et al. 2016; Rosario and Baburaj 2017; Jumaah et al. 2017). Result and inferences of experiments performed in this study are given below.

Isolation and identification of bacteria: From five diverse locations counting soil and decomposed waste, as many as 20 bacteria were isolated. Most of the bacterial strains were isolated from plastic dumped soil samples (Hisar, Haryana) and some from decomposed waste. The sample source, colony colour, and colony morphology are mentioned in Table 1.

Primary screening of plastic degrading bacteria: Solid media containing 0.1% plastic was used for the primary screening of selected bacterial isolates (Fig. 1). Degradation efficiency of selected isolates was recorded by measuring the growth diameter of bacterial colonies on growth media (Table 2) as described by Tokiwa et al. (2009) and Usha et al. (2011). Plastic degrading ability was considered to be high when diameter of bacterial colony was greater than 2.5mm, moderate when it was in between 1.0 to 2.5 and weak when it was below 1.0mm. 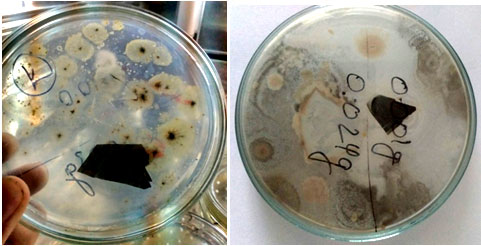 Weight loss determination: A disc of 1cm was prepared using polythene bags and pre-weighed before inoculation. Then, it is aseptically transferred in the liquid as well as solid media with selected strains and incubated as shown in Fig 2. It is considered that bacteria use plastic as their food material and hence responsible for degradation of plastic. It actually depends on the nature of bacteria, because their favorable environment varies according to different soil conditions. After one month of incubation, plastic discs were recovered from media, washed thoroughly using distilled water, shade-dried and then weighed for final weight.  According to Katherison (2003), Pseudomonas species is able to degrade plastic by 8.16% and polythene by 20.54%.

Apart from it, some fungus like Aspergillus, have capacity to degrade plastic by 7.26%. Although, this is only the primary steps and these efforts are not sufficient to manage the environmental damage which is caused by the plastic but it can be further increased and improved with advanced technology. Aswale et al. (2010) showed 50% weight loss in polythene discs treated with Phanerochaete chrysosporium after 8 months of shaking at room temperature and pH 4. Microorganisms have secondary metabolism to transform or accumulate plastic like compounds. Microbes hydrolyze plastic by enzymatic methods, degrade the polymer to low molecular weight compounds and make them available for further assimilation (Shah et al. 2009). Some environmental factors like temperature and pH directly affect the action of enzymes for biodegradation.

Figure 2: Microbial degradation of plastic in liquid medium after 15 days of inoculation

From the data collected, weight loss of the plastics was recorded as shown in Table 4.  After lab testing of these selected strains, it was found that P1, P4 and P11 have strong plastic degrading ability as compared to other strains. The average reduction in weight of the different plastic samples by various isolates used is the present investigation was 4.0 mg (Table 4).

Table 4. Reduction in the weights of the plastic samples after one-month incubation

All the three strains showed positive response towards gram staining, catalase and citrate test while these were found to be negative for gelatin, mannitol and urease test.  Microbes are responsible for degradation of a lot of stuff in nature. They are also actively involved in polythene degradation in natural conditions, but microbes can be tailored in lab for improvement of their plastic eating capacity. This can be possible by using optimization strategy. Combination of different pH, temperature, and media composition with different stains can make it happen. We have also made some efforts in this direction. During this study, we selected three strains of bacteria P1, P4 and P11 isolated from plastic dumped soil samples. These strains were capable of eating plastic. The plastic degradation ability of these bacterial strains can be further improved using biotechnological tools. The biochemical analysis showed that all the bacterial strain identified belong to the genus Staphylococcus as per Bergey’s Manual.

Albertsson AC, Andersson SO and Karlsson S (1987) The mechanism of biodegradation of polyethylene. Polymer Degradation and Stability 18: 73–87.

Shah A, Hasan F, Hameed A and Akhter J (2009) Isolation of Fusarium sp. AF4 from sewage sludge, with the ability to adhere the surface of polyethylene. African Journal of Microbiology Research 3(10): 658-663