Aniline is an important chemical compound which is well own for its wide applications in the manufacture of dyestuffs, rubbers, pesticides, plastics and paints (Tang et al., 2012). However, the aniline-laden wastewater discharged from these industries has become a severe environmental problem as well (O’Neill et al., 2000). It is highly toxic and has harmful inﬂuences on human health and aquatic life (Leili M et al., 2013). Aniline is a blood toxin, causing hemoglobin to convert to methemoglobin, resulting in cyanosis (Guo et al., 2012). Lengthy or repeated exposures may result in decreased appetite, anemia, weight loss, nervous system affects, and kidney, liver and bone marrow damage. Any exposure may cause an allergic skin reaction (Balarak et al., 2016).

Due to the negative environmental impact caused by the high toxicity of aniline, these wastewaters demand thorough treatment. Traditionally, Aniline-containing wastewater is usually treated by photocatalysis, catalytic oxidation, biodegradation, advanced oxidation and adsorption. Among these technologies, adsorption has been proven to be effective in separating a wide variety of organic contaminants from aqueous solutions (Shaobin et al., 2011). Compared to other treatment processes, adsorption has the advantages of (1) removing a wide variety of dissolved organic compounds and (2) not producing any harmful byproducts (Ramavandi et al., 2015, Ma et al., 2012). Various adsorbents have been developed for the removal of organic pollutants (e.g., dyes, pesticides, pharmaceuticals/drugs, and phenols) from water (Zazouli et al., 2014). Activated carbon (AC) is the most commonly used commercial adsorbent because of its excellent adsorption capacity for organic contaminants (Balarak et al., 2016).

However, it has certain shortcomings that include limited availability, low adsorption capacity, and difficult recovery (Zazouli et al., 2014). Recently, a great deal of attention has been focused on the application of nano-structured materials as adsorbents to remove toxic and harmful organic substances from wastewater (Visa et al., 2012, Jazayeri et al., 2010, Futalan et al., 2011).

Carbon nanotubes (CNTs) are one of the most widely studied carbon nanomaterials and can serve as excellent adsorbents. Because of their hollow and layered structure and large speciﬁc surface area, which is why CNTs are the most commonly used nanomaterials for adsorbing toxic material. CNT adsorbents can be classiﬁed into three types: single-walled CNTs (SWCNTs), multi-walled CNTs (MWCNTs), and functionalized CNTs (f-CNTs). Such materials have already played an important role in the effective removal of several organic contaminants from water (Balarak et al., 2016, Nourmoradi et al., 2013).

The bulk solution of the aniline was prepared by dissolving a measured quantity of aniline (molecular formula is C6H7N and formula weight is 93.13 g/mol) in 1 L of double distilled water.The single-walled carbon nanotubes with average diameters of 10–20 nm [SMWCNTs (10–20)] was obtained from Research Institute of Petroleum Industry (RIPI), Tehran, Iran and were used as received. On the basis of the information provided by the manufacturer, the SWCNTs were synthesized by catalytic chemical vapor deposition (CVD) method. All chemicals used in this study were obtained from Sigma–Aldrich (analytical grade), and all solutions were prepared using deionized water. Double distilled water was used in all the experiments.The scanning electron microscope (SEM) (JEOL JSM 6500F) and transmission electron microscopy (TEM) (JEOL JEM-1230 operating at 120 kV) were used to characterize the SWCNTs morphological structure.

Adsorption kinetics was carried out by in batch technique. Batch experiments were carried out for determining the adsorption isotherms of aniline onto the various adsorbent in a glass beaker. The aniline aqueous solutions were magnetically stirred at a constant rate (180 rpm), allowing sufficient time for reaching adsorption equilibrium. It was assumed that the applied stirring speed allows all the adsorbent surface area to come in contact with aniline molecules over the course of the experiments. In each experiment a fixed volume (100 mL) of aniline aqueous solution at constant aniline concentration (25-200 mg/L) was used. The study was performed at room temperature to be representative of environmentally relevant condition. All experiments were carried out in duplicate and the average value was used for further calculation. The removal efficiency and sorption capacity of the SWCNTs were determined by Eq. (1) and (2), respectively (Rawajfih et al., 2006, Balarak et al., 2016):

Where; R (%) and qe (mg/g) are the removal efficiency and adsorption capacity, respectively. Co and Ce are the concentrations of aniline in solution (mg/L) at time t=0 and t, respectively, M (g) is the mass of the sorbent and V (L) is the volume of the aniline solution.

The removal of the Aniline was studied with different dose of SWCNTS from (0.01 to 0.15 g/L) at the optimum concentration of 25 mg/L with fixed contact time (30 min), pH (7) and temperature of 30˚C ± 2˚ C. The effect of the dose rate of SWCNTS on the removal of Aniline is pictured in Figure 2. It was noted that the percentage removal of the Aniline ion increases as the concentration of SWCNTS increases owing to the enhanced total surface area of the adsorbent. This means that the toxic ions can be removed effectively from the contaminated water with the proper amount of the adsorbent, which would possess more adsorption sites available for the Aniline ion uptake from the solution (Mojovic´ et al., 2011, Jadhav et al., 2001). The optimum dose rate was found to be 0.8 g/L for with the effective removal of 98.9%.

An isotherm describes the equilibrium relationship between the adsorbate concentration in the liquid phase and that on the adsorbent’s surface at a given condition (Suresh et al., 2012). It gives the most appropriate equilibrium correlation. They are also important for comparing biosorption performance, optimization, design and prediction purposes. The biosorption of aniline on SWCNTS was optimized by analyzing equilibrium curve of the following three isotherm models.

The Langmuir Isotherm developed by Irving Langmuir was originally used to describe the gas-solid phase and adsorption onto activated carbon, but is now extended and generally applied to liquid-solid interaction. The equation is (Mojovic´et al., 2011, Jadhav et al., 2001):

Where qe (mg/g) and Ce (mg/L) are the solid phase concentration and liquid phase concentration of aniline at equilibrium, respectively. Qm (mg/g) is the maximum sorption capacity and b (L/mg) is the Langmuir constant related to the affinity of the adsorbate for the adsorbent. The linearized form of Equation (3) is given as (Balarak et al., 2015, Zazouli et al., 2015):

Values of qm and b are determined from the linear regression plot of (Ce/qe) versus Ce, Fig 3 a. Linear plot in negative direction indicates that Langmuir model fails to explain the process of adsorption and absence of formation of monolayer.

The Freundlich isotherm relates the solute concentration on the adsorbent surface to the solute concentration in the liquid phase. The isotherm assumes that adsorption occurs on a heterogeneous adsorbent surface (i.e. multilayer adsorption). Freundlich model is represented by the equation (Balarak et al., 2016, Balarak et al., 2017): 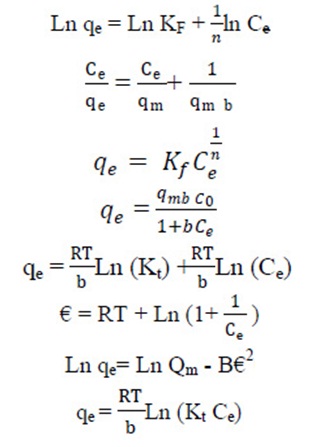 Equation (5) can be linearized in logarithmic form, Equation (5) and the Freundlich constants can be determined (Xin et al., 2011). (6)

Where Kf and n are the Freundlich constants characteristic of the system. Kf and n are indicators of adsorption capacity and adsorption intensity, respectively. A linear regression plot of log qe versus log Ce, Figure 3b gives the Kf and n values. The model is applicable to the adsorption on heterogeneous surfaces by a uniform energy distribution and reversible adsorption.

Tempkin Isotherm: The Tempkin isotherm takes into account the interaction between adsorbate and adsorbent and assumes a linear decrease in the heat of adsorption instead of a logarithmic decrease. Tempkin isotherm is expressed as (Senturk B et al., 2009, Ghaedi et al., 2012):

Where , and B is a constant related to adsorption heat, and Kt is the equilibrium binding constant (L/mol) corresponding to maximum binding energy. Kt and â are calculated from the slope and intercept of qe versus LnCe, Fig 3C The Tempkin equation better holds for the prediction of gas phase equilibrium rather than liquid phase. The liquid phase is a more complex phenomenon since the adsorbed molecules do not necessarily organized in a tightly packed structure with identical orientation.

Dubinin Radushkevich Isotherm: This model is involved to estimate the porosity, free energy and the characteristics of adsorbents. The isotherm assumes the surface heterogeneity and the variation of adsorption potential during sorption process. The model has commonly been applied in the following linear Equation (Balarak et al., 2016):

Polanyi potential, €, can be calculated according the following equation (Agarwal et al., 2016):

Where B is a constant related to the adsorption energy, Qm the theoretical saturation capacity. The slope of the plot of Ln qe versus €2 gives B (mol2∙J−2) and the intercept yields the adsorption capacity, Qm (mg∙g−1) as shown in Figure 3d. The mean free energy of adsorption (E) which is energy require to transfer one mole of the aniline from infinity in solution to the surface of the solid can be calculated from the B value using the following relation (Balarak et al., 2016):

Linear plot with high regression factor indicating the successful model in explaining the adsorption model. Table 1 summarizes different isotherms constants. The graphs in Fig 3-6, the Langmuir Isotherm in Figure 3 gave the highest correlation coefficient (R2=0.8108) rate to the Freundlich isotherm (R2=0.7999) and Dubinin Radushkevich (R2=0.7999). The linear coefficient of determination for the Tempkin Isotherm was not very high (R2=0.014). The graphs show that both the Freundlich and Langmuir Isotherms models can sufficiently describe the adsorption data well for aniline. The fact that the sorption process showed a good fit to the Langmuir Isotherm suggests a finite adsorption capacity and energetically equivalent sites.

The results of the present study indicate that SWCNTS have good potential as adsorbents for the removal of aniline from aqueous solution. The amount of aniline uptake (mg/g) was found to increase with increase in aniline concentration and adsorption time. The results obtained from the plots show that the process of adsorption follows Langmuir and Freundlich Isotherm model for adsorbent. Thus, it can be used to estimate the model parameters. This confirms the fact that Langmuir Isotherm best explains the adsorption process of aniline from aqueous solution. The maximum loading capacity estimated was 37.59 (mg/g) for Langmuir model.

The authors are grateful from deputy of research and technology of Qom University of Medical Sciences due to supporting of this research.