Bacterial populations from organs (viz., liver, spleen, kidney and gill) of  Clarias batrachus of the sewage fed water areas near IISCo slag disposal site, Dharampur on northern side of  Damodar River, Asansol, West Bengal, India, were enumerated, followed by determination of resistance for antibiotics and heavy metals.  Maximum resistance is shown against ampicillin (95%) and minimum against ciprofloxacin (5%). Most of the isolates exhibited an increasing order of tolerance for the metals (µg/mL) copper (200), cadmium (200), iron (400) and chromium (400), with minimum inhibitory concentration (MIC) ranging from <50 to 1600 µg/mL. A total of 100 bacteria have been successfully isolated from internal organs of of  Clarias batrachus (Aeromonas species (20%); Escherichia coli, (45%); Bacillus species (4%); Pseudomonas aeruginosa (6%), Staphylococcus aureus (18%) and coagulate-negative Staphylococci  aureus (7%)). In terms of antibiotic susceptibility testing, each isolate was tested against 10 antibiotics. The multiple antibiotic resistance (MAR) index the isolated bacterial ranged fro 0.2-0.7. These observations indicate that the bacteria isolates are from  a high risk source where antibiotics are frequently used, possibly from sewage effluents.  Significant occurrence of bacterial population in organs of fish with high incidence of resistance for antibiotics and heavy metals may pose risk to fish fauna and public health.

Indiscriminate use of various antibiotics has caused develop­ment of resistance for various antimicrobials and chemotherapeutic agents among the gut flora of homeotherms. Use of antibiotics will exert more selective pressure and resistant pathogens are going to be encontered more frequently (MacMillan, 2001; Priyadarshini et al., 2020). Resistance to antibiotics and metals occurs simultaneously when the genes specifying resistant phenotypes are located together an equivalent genetic element like a plasmid, transposon, or integron (Chapman 2003; Frost et al., 2005; Venner et al., 2009; McMillan et al. 2019). This present study was conducted to evaluate the antibiotic and heavy metal tolerance of bacteria obtained from internal organs of Clarias batrachus.

Antibiotic susceptibility testing was conducted consistent with Kirby and Bauer disk diffusion method (Bauer et al., 1966) by employing commonly used antibiotics (namely 30 µg  of amikacin, 30 µg  of amoxicillin, 10 µg  of ampicillin, 30 µg  of chloramphenicol, 5 µg  of ciprofloxacin, 10 µg  of gentamycin, 5 µg  of levofloxacin, 10 µg  of sparfloxacin, 25 µg  of streptomycin and 30 µg  of tetracyline). The colonies were transferred into agar plate. The swab was then streaked in three, different directions over the surface of plate of Mueller-Hinton Agar such that a uniform well spread out inoculum is achieved. After 18 hours of incubation at a specific temperature (37±1 °C) the plates were examined and the diameters of the inhibition zone was measured to the nearest millimeter. Inhibitions were measured and the result interpreted using Clinical Laboratory Standard Institute (2017).

The strain isolated was tested to four metals by Agar dilution method (Malik and Ahemad, 2006; Kinare and Shingadia, 2014). Stock solutions of 104 μg/mL were prepared by dissolving the precise quantities of the follwing metal salts: CdCl2 (SRL), K2Cr2O7 (SIGMA-ALDRICH), CuSO4. 5H2O(SIGMA-ALDRICH) and FeCl3 (MERCK) in water and sterilized. 20 mL of agar was poured into petri plates  and therefore the volume of metal stock solutions was calculated by the formula: C1 × V1 = C2 × V2, where C1 is the metal concentration avaiable, V1 is the volume of stock solution used, C2 is that the concentration of metal in agar, and V2 is that the volume of agar. Then the isolated strains were streaked onto the medium-containing increasing concentrations of metal salts using sterile loops. Then, plates were sealed and incubated at 30 °C for five days. Plate-containing only agar was also inoculated and incubated to act as control. Rock bottom concentration of every metal at which no growth occurred in comparison to the control plates was considered as MIC value.

The antibiotic resistance among random bacterial isolates from all four organs has shown a full range of resistance (0–100%) for ten common antibiotics of therapeutic and prophylactic uses among human beings, and in fish aquaculture. Resistance was found to be maximum among the isolates from spleen, kidney, and liver, while it was minimum among those from gill. Maximum average resistance was exhibited for ampicillin (95%) and tetracycline (75%) and minimum for ciprofloxacin (05%) (Table 1).

The heavy metal resistance percentage among bacterial isolates from fish organs presented in Table 2. The maximum tolerance, in general, was observed for chromium and iron (400 µg/mL), while it was minimum for copper and cadmium (200 µg/mL).  The MIC value of isolates is presented in Table 3.  Test isolates were also found to be tolerant to different concentrations of various toxic heavy metals as evidenced by their MICs ranging from <50 to 1600 µg/mL  (Table 3).

Except some gill isolated bacteria (ADCG14-ADCG21) the MAR index of all isolates show values higher than 0.2 (Table 4). All the isolate (except ADCG14-ADCG21) were multidrug resistant (resistant to three or more drugs). The trend of MAR index is alarming for the bacterial species isolated from the site. 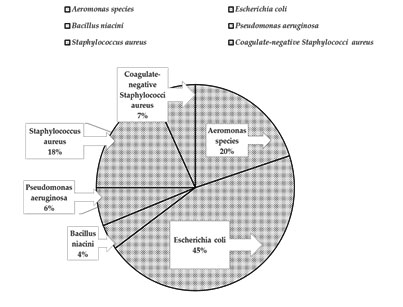 Contamination of river water with municipal sewage and industrial effluent results in the occurrence of pathogenic microorganisms, particularly fecal bacteria and toxic metals, above their maximum permissible limits (Chatterjee et al., 2010, Iloms et al., 2020). Fish in such water are exposed to these bacteria and metals, which bioconcentrate in different organs of fish. It has been observed to be maximum in liver and minimum in gills. Thus, it appears from these findings that soft tissues in massive organs are more prone to bioconcentration of bacteria, leading to incidence of infectious diseases among the aquatic fauna. This may be due to availability of more nutrients and lack of exposure to the surroundings. Bioconcentration of aquatic bacteria such as coliforms, streptococci, and aeromonads in gut, liver, and muscles of tilapia fish grown in a sewage-contaminated pond has also been noticed (Fattal et al., 1993; Wamala et al., 2018).

The resistance exhibited for ciprofloxacin, levofloxacin, streptomycin and gentamycin is a signal of the effectiveness of broad-spectrum antibiotics of the present generation. With these observations it appears that the source of the problem of antibiotic resistance in riverine ecosystems is fecally contaminated water, and fish populations in them plays important role in creating resistance. Antibiotic resistance patterns in the bacterial population in an aquatic ecosystem have been found to be useful in identifying non point sources of fecal pollution (Wiggins et al., 1999; Labrador et al., 2019).

The occurrence of resistance for common antibiotics is, further, an indication of indiscriminate use of these antibiotics, leading to constraint in antimicro­bial therapy for infectious diseases. The loss of antibiotic susceptibility among the aquatic bacteria has been observed to be affected to a considerable extent by the physicochemical qualities of water and seasonal variations (Pathak et al., 1993). In addition to assessment of loss of antibiotic susceptibility, the test isolates were also found to be tolerant to different concentrations of various toxic heavy metals as evidenced by their MICs. The isolates from visceral organs, i.e., spleen, kidney, and liver, exhibited maximum resistance for ampicillin, tetracycline, and amoxicillin with the highest tolerance for iron and chromium; while the isolates from gills showed minimum resistance for ampicillin and tetracycline with rather low tolerance for cadmium and copper. These observations indicate that visceral organs provide better conditions for bacterial growth and biological activity than exposed organs such as gill. Increase in the MIC of toxic metals as well as antibiotic resistance among aquatic bacterial populations is also an indication of risk to the safety of the aquatic ecosystem, fish fauna, and ultimately human health.

MAR values were ranging from 0.2 to 0.7. MAR indexes of the present work revealed that bacteria from locally raised fish may has been exposed to test antibiotics. McPhearson et al., 1991 reported that the MAR index of bacteria from a catfish pond, near a river where antibiotic was commonly used as treatment, was as high as 0.76.

Currently, local fish farmers employ amoxicillin to treat fish diseases. The present results proven that amoxicillin is no longer effective, since maximum bacterial isolates were sensitive to it. It appears that the emergence of resistance is also influenced by the physicochemical characteristics of water and several environmental factors including hospital and aquaculture waste disposal (Rhodes et al., 2000; Iwu 2020) along with the form and bioavailability of metals in the ecosystem. Resistance also develops from a non-specific mechanism with gene regulation of plasmids and chromosomes which may be heritable due to the presence of a resistance factor (R-factor) among the aquatic bacterial population (Silver and Walderhaug, 1992). The infections caused by the pathogenic bacteria with R-plasmids may pose a risk of therapeutic problems to public health and fish population. Thus, the water bodies with antibiotic and metal resistant bacteria serve as an environmental reservoir and source for the development of this trait among opportunistic pathogens and constitute a significant public concern. Therefore, such studies should be considered for the selection of antibiotics in dealing with water-borne diseases, particularly among fishermen and fish consumers. These findings indicate that sewage and industrial pollution are responsible for the emergence of bacterial resistance and deterioration of water quality, along with risk to biodiversity of the hydrobionts and the human health.

Conflict of Interest: We declare that we have no conflict of interest

Ethical Approval: This article is not under consideration or published elsewhere. Ethical clearance for the study was obtained from IAEC, Approval No. 17/IAEC (05)/RNLKWC/2019, Dated 27.07.2019.

Priyadarshini SL, Suresh M, Huisingh D (2020). What can we learn from previous pandemics to reduce the frequency of emerging infectious diseases like COVID-19? Global Transitions; 2:202-220.