Analysis on the Diversity of Jumping Spiders of Maharashtra, India

Family Salticidae (jumping spiders) is the largest family of spiders under order Araneae. Jumping spiders are ubiquitous in terrestrial ecosystems and are familiar to humans as they are also found in human dwellings and home gardens. They are well known for their complex vision-based behaviour, which include elaborate mating behaviours, stalking and capturing of prey species, araneophagy and mimicry. Jumping spiders are generally diurnal in habit and being predators exclusively, they have an important role in the terrestrial food webs. Being well-represented in agroecosystems, they have a significant role in the biological control of pest species. Despite being a major arthropod group, not much is known regarding the diversity, distribution, taxonomy and behaviour of jumping spiders found in the various regions of India. Maharashtra is one of the largest states in India, however only a few records exist of the salticid fauna of Maharashtra.

Hence, there was a need to ascertain the diversity of jumping spiders found in Maharashtra. The methodology which has been used to this purpose includes collection and identification of jumping spiders from different areas of Maharashtra and also the review of previously published reports. The jumping spiders of Maharashtra are represented by 29 species in 18 genera. This appears to be just a small portion of the salticid fauna actually found in Maharashtra and further work is required to thoroughly understand the diversity and biology of this group. This work highlights a neglected group of Arachnids, provides an up-to-date number of salticid species known from Maharashtra, and shall be of help to future researchers.

Gajbe P. U. Analysis on the Diversity of Jumping Spiders of Maharashtra, India. Biosc.Biotech.Res.Comm. 2021;14(2).

Currently 49,159 species of spiders in 4,207 genera of 128 families are known from the world. Taking into account the number of species, family Salticidae (jumping spiders) is the largest family with 6334 species in 659 genera (World Spider Catalog 2021). Indian jumping spider fauna consists of 181 species in 62 genera (Siliwal et al. 2005). It is difficult to estimate the actual number of jumping spider species found in India as this group is very diverse but has not been thoroughly studied in India. Jumping spiders are unique in the animal kingdom as they are known for their intricate vision-based behaviour during encounters with prey and conspecific individuals. This is achieved using eyes specialized for discerning fine detail
(Cerveira et al. 2019).

Jumping spiders have a pair of large forward facing anterior-median eyes, which are the principal eyes (Fig. 1). They also have three pairs of smaller eyes called secondary eyes, which include one pair each of anterior-lateral, posterior-median and posterior-lateral eyes. The secondary eyes are highly proficient motion detectors. The salticid eyes provide a near 360° ﬁeld of view and forward-looking spatial resolution surpassing that of all insects and even some mammals (Menda et al. 2014). Among arachnids, jumping spiders are agile and dexterous jumpers and have a semi hydraulic system of locomotion (Brandt et al. 2021). Diverse predatory strategies have evolved in jumping spiders, including araneophagy, aggressive mimicry, myrmecophagy, and prey-specific prey catching behaviour (Jackson and Pollard 1996; Brandt et al. 2021).

Jumping spiders perform a set of responses in catching prey. These responses consist of three primary patterns, each of which is subdivided into discrete motor elements, namely, Orientation—alert, swivel, and alignment; Pursuit—follow, run, and stalk; and Capture—pre‐crouch, crouch, and jump. Portia is a genus of specialized web-invading jumping spiders that use aggressive mimicry (Jackson 2009; Forster 2010). Portia fimbriata routinely includes web-building spiders and cursorial salticids in its diet, both of these types of prey being dangerous and unusual prey for a salticid. Jumping spiders are basically diurnal predators. However, certain species show vision-based discrimination under low ambient light levels previously associated with nocturnal species (Li and Jackson 1996; Cerveira et al. 2019). Species in the genus Habronattus have high warming tolerances, suggesting that these species should be robust to future increases in habitat temperature (Brandt et al. 2020).

Jumping spiders being active hunters do not build webs. However, they do use their silk in different ways. For salticids, dragline silk is critical for dynamic stability and prey-capture efficiency (Chen et al. 2013). Jumping spiders also use their silk for constructing various types of retreats or shelters. For example, Myrmarachne spiders construct elaborate tubular shelters with multiple entrances (Hurni-Cranston and Hill 2018). Recently, an unidentified jumping spider (Anarrhotus sp.) from south-western India has been recorded as constructing planar orb-webs that serve as nocturnal retreats.

These webs are not inhabited during the daytime and do not appear to play a role in prey capture by these spiders (Hill et al. 2019). Jumping spiders display complex patterns of mating behaviour. For example, Plexippus paykulli males use different mating tactics depending on the female’s maturity and location (courtship versatility): visual displays if the female is mature and away from her nest (Fig. 2), vibratory displays if she is mature and, in her nest, and cohabitation if she is a sub-adult in her nest (Jackson and Macnab 1989; Hill et al. 2019).

Male jumping spiders of the genus Habronattus court females using a combination of ornament and motion (dance) displays coordinated with vibrational songs. Jumping spiders constitute one of the most important groups of predaceous organisms in terrestrial ecosystems. They are ubiquitous in agroecosystems and are well-known as biological control agents. Most biocontrol studies reflect the emphasis on specialist (monophagous) predators and parasitoids. Spiders being prey generalists (polyphagous), have not received much attention in biocontrol studies. Recent research has highlighted widespread non-consumptive effects and complex intraguild interactions of spiders. A better understanding of these effects is needed to optimize biocontrol services by spiders in agroecosystems (Riechert and Lockley 1984; Michalko et al. 2018, Rivera et al. 2021).

The collected spiders were preserved in 70% ethyl alcohol and identified with the help of scientific literature (Sebastian and Peter 2009; Gajbe 2020). The species recorded in previous studies have been ascertained by collecting research papers, books and chapters in edited books available in print and/or online, pertaining to the salticid fauna of Maharashtra. References for each species recorded have been provided against their names in Table 1. The scientific names of jumping spiders are based on the World Spider Catalog (2021).

The salticid fauna of Maharashtra is represented by 29 species in 18 genera (Table 1, Figs. 3-12). Species such as Hasarius adansoni, Plexippus paykulli, and Plexippus petersi are commonly observed in human dwellings actively searching for prey on the walls of buildings. Plexippus paykulli is native to South-East Asia but is now found in different parts of the world. Other species such as Asemonea tenuipes, Carrhotus viduus, Hyllus semicupreus, Phintella vittata, and Thyene imperialis are generally seen among foliage, where they can hide and stalk insect prey, and also build silken retreats. Menemerus bivittatus is a pantropical species that is often seen on the bark of trees or on the walls of buildings (Gajbe 2020). 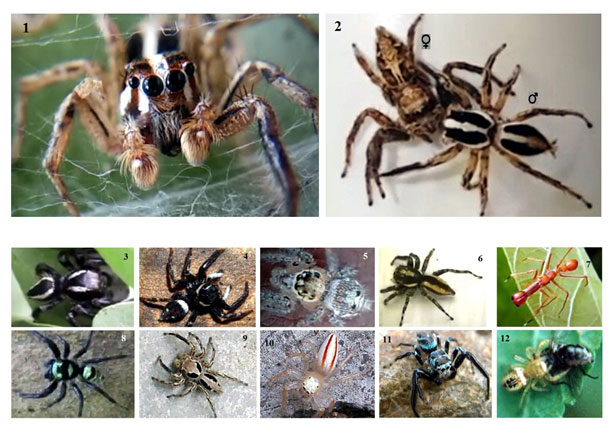 Two-striped spider, Telamonia dimidiata is common in Maharashtra and found in foliage. A few species of ant-like spiders of the genus Myrmarachne have been reported in one of the earliest works on the salticid fauna of Maharashtra (Tikader 1973). These ant-like jumping spiders are remarkable since they not only mimic the form of the arboreal ant, Oecophylla smaragdina, but also mimic its behaviour by making ant-like movements, waving their front legs as if they are antennae (Gajbe 2020).

The jumping spider fauna of Maharashtra is represented by 29 species in 18 genera. Considering the large size of Maharashtra and the different types of terrestrial habitats found in the State, the actual number of jumping spider species found in the State could be much more. Considering their ubiquity and unique adaptations among arthropods, jumping spiders require more attention from researchers with respect to their diversity, distribution, biology, behaviour and biocontrol properties.

The author is thankful to the Principal, S. M. Mohota College of Science, Nagpur India  for facilities.

Conflict of Interests: None

Deshmukh, U.S. (2017). Can spiders be the biological control measure: A survey through orange and cotton fields. Indian Journal of Scientific Research, 12(2): 011-016.

Prószyński, J. (2016). Delimitation and description of 19 new genera, a subgenus and a species of Salticidae (Araneae) of the world. Ecologica Montenegrina, 7: 4-32.

Rubio, G.D., Stolar, C.E., Ohashi, D.V., and Baigorria, J.E. (2019). Jumping spiders (Araneae: Salticidae) in agroecosystems: a case study to know how friendly some crops can be for native fauna. Studies on Neotropical Fauna and Environment, 54(2): 1-16.

Wikipedia. (2021). Maharashtra. In Wikipedia, online at https://en.wikipedia.org/wiki/Maharashtra#cite_note-10, accessed on 16 February 2021.