Further, these best predicted compounds were subjected for physicochemical, pharmacokinetic and toxicological investigation using   preADMET tool and cross verified by SwissADME tool. Compound PubChem SID 17517397was satisfied all the ADME/Tox parameters out of four activators. In the AutoDock Vina and AutoDock programmes, the binding energy of compound SID 17517397 was -10 kcal / mol and -11.11 kcal/mol with PKM2.Compound SID 17517397 had human intestinal absorption, Caco2 cell permeability, Plasma Protein Binding and Blood-Brain Barrier penetration values as 94.18%, 23.86, 89.50%, 3.30, respectively, which indicates that it is in the range of well absorbed and active compound range. Compound had negative carcinogenicity value in mouse and rat.  Therefore, it is concluded that compound could be promising novel activator for PKM2 as drug target but it must be verified by experimental studies.

In cancer cell metabolism, the regulation of Pyruvate kinase M2 isoform (PKM2) plays a key role. The last rate-limiting enzyme in the glycolytic pathway is pyruvate kinase (PK), which catalyses the transfer of a phosphate group from phosphoenolpyruvate to ADP to obtain pyruvate and ATP. There are four distinct subtypes of Pyruvate kinase. PKL isoforms exist predominantly in the liver, kidney and red blood cells, whereas PKR is mostly present in red blood cells (Gupta and Bamezai, 2010; Israelsen et al., 2013, Wong et al., 2013; Yang and Lu, 2013; Otto et al., 2016).

In myocardium, skeletal muscle and brain tissue, PKM1 is distributed, and in tissues such as the brain and liver, PKM2 is distributed (Israelsen et al., 2013). For cancer metabolism and tumour development, PKM2 is essential, yet tetramer and dimer of PKM2 consist of the same monomer (Ashizaw et al., 1991; Yang and Lu, 2015). There are substantially different biological effects between the tetramer and dimer form (Muñoz-Colmenero et al., 2015).

In the sense of glucose metabolism, the tetramer primarily plays the role of pyruvate kinase and controls glycolysis and dimer PKM2 as a switch for energy metabolism and material synthesis (Dombrauckas et al., 2005). In the dimer state, PKM2 can enter the nuclear to regulate gene expression, epithelial–mesenchymal transition (EMT), invasion and metastasis and cell proliferation. Zhang et al. (2019) first used the switching effect of PKM2 in glucose metabolism to expand and enrich the Warburg effect (Zhang et al., 2019).

Endogenous and exogenous activators allosterically regulate the change between PKM2 dimers and tetramers. PKM2 dimers are tetramerized using activators that allow PKM2 to behave like PKM1 induces reversal of the Warburg effect in cancer cells. Phosphorylation or acetylation of native tetrameric PKM2 in cancer cells causes a transition to a dimeric/monomeric form, which translocate into the nucleus and causes oncogene transcription. However, it is unclear how these post-translational modifications (PTMs) cause PKM2 to lose its oligomeric state. Nandi et al.

(2020) performed crystallographic and biophysical studies of PKM2 mutants containing residues that mimic phosphorylation and acetylation Nandi et al. (2020). They discovered that PTMs cause a significant structural reorganization of the binding site for fructose 1, 6-bisphosphate (FBP), an allosteric activator, affecting the interaction with FBP and causing oligomerization disruption (Nandi et al., 2020).

In the current research, we have implemented a virtual screening approach to search out the novel activator for the treatment of cancer targeting the PKM2 protein. In-silico physicochemical, pharmacokinetic and toxicological properties of activators were analysed by preADMET and cross-checked with the SwissADME web tool (Lee et al., 2003; Daina et al., 2017).

The 3D crystal structure of Pyruvate kinase isoform M2 in complex with an activator was retrieved from the Protein Data Bank with PDB ID: 4G1N (Kung et al., 2012). All the water molecules, Oxalate, Magnesium ions and N-(4-{[4-(pyrazin-2-yl) piperazin-1-yl] carbonyl} phenyl) quinoline-8-sulfonamide (NZT) were removed and polar hydrogen added to PKM2 protein for structure based virtual screening as well as molecular docking processes. Small-molecule activator NZT bind PKM2 at the subunit interaction interface, a site that is distinct from fructose-1,6-bisphosphate (FBP) was used as activator binding site in molecular docking (Kung et al., 2012).

Docking was carried out on the MTiOpenScreen server with AutoDock Vina and with AutoDock on MTiAutoDock server (Labbé et al., 2015). The rankings of AutoDock Vina and AutoDock were combined to construct a consensus list of compounds with both techniques that scored well.  Validation and Optimization process of best predicted compounds had been processed by PreADMET tool and cross check by Swiss ADME tool, which are web-based application for predicting absorption, distribution; metabolism, elimination and toxicity (Lee et al., 2003; Daina et al., 2017). Using Python Molecular Viewer software, docking findings were visualized to display the 3D structure and position of activator binding to the protein (Sanner, 1999; Daina et al., 2017).

Structure based virtual screening: 1500 small molecules were screened after applying filter criteria in database. A gradient-based conformational search approach was employed by AutoDock Vina. The grid box parameters were set to values of 3.743 Å,-12.72, and 48.977 Å for the grid box center and 34 Å ×28 Å ×32 Å for the box dimensions. We use a total of 10 binding modes and 8 for exhaustiveness. The scoring of the docking poses produced and the ranking of the ligands were based on the empirical scoring function of Vina approximating the affinity of binding in kcal/mol. Top 100 compounds were selected based on their lowest binding energy and further docked with activator binding site of PKM2 using AutoDock. Docking results of both were shown in table 1.

In the MDCK method, the cell permeability in vitro used canine kidney cells and has a shorter growth rate than the Caco-2 cells were used as a tool for the rapid analysis of permeability (Irvine et al., 1999). In the pharmaceutical industry, skin permeability is used to measure the toxicity of chemical products in the event of unintended skin touch (Singh and Singh, 1993). Moreover, the blood-brain barrier (BBB) was essential for drug pharmacology. PCaco-2, MDCK, Skin Permeability, PPB and BBB of four compounds were shown in table 2. Compound SID 26649876 had a BBB value greater than 2.0 and was graded in the central nervous system with high absorption (Ma et al., 2005).

Visualization of protein-ligand interaction: Best docked complex was analyzed through Python Molecular Viewer for their interaction study shown in figure 1.

Figure 1:  Docking pose of compound SID 17517397 on PKM2 protein structure. One H-bond was formed between amino acid LYS311 of protein Chain B with compound. Chain A and B binding residues of PKM2 protein were colored with pink and royal blue, respectively. 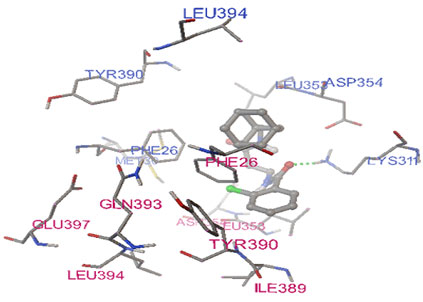 It is evident from this analysis that compound SID 1751739 was located at the subunit interaction interface of protein and was stabilized by hydrogen bonding.

Conflict of Interests: Authors declare no conflict of interests among themselves.