The hunt for novel antimicrobials has become unavoidable due to the emergence of new infectious illnesses and the rise in treatment resistance among dangerous microorganisms. Nanoparticles are one of the most promising and new therapeutic agents currently available. The unique physiochemical features of nanoparticles, paired with their ability to impede microbe development, has sparked a boom in interest in nanoparticles and their potential as antimicrobials. Metals in the form of nanoparticles have recently come to the fore as possible antibacterial agents thanks to the convergence of nanotechnology and biology. The current invention and deployment of new technologies has ushered in a new age, the nano-revolution, which reveals the function of plants in bio and green nanoparticle synthesis, which appears to have piqued everyone’s interest in terms of synthesizing stable nanoparticles. Although nanoparticles may be made using a variety of traditional ways, biological approaches outperform physical and chemical approaches.

Plants, rather than microorganisms, are being used to synthesize nanoparticles, and the presence of a wide variety of bio-molecules in plants can function as capping and reducing agents, increasing the rate of reduction and stability of nanoparticles. Biosynthesized Palladium Nanoparticles (PdNPs) are environmentally sustainable, cost-effective, biocompatible, and expanding research areas. Because of their possible uses in the medical domain. The current research examines the possible antibacterial efficacy of biologically synthesized Palladium nanoparticles using aqueous leaf extract of Cocculus hirsutus as a reducing and capping agent. In a reduction reaction, silver (Pd+2) ions interact in leaf extract and are reduced in solution (Pd+1), resulting in the formation of stable spherical Palladium Nanoparticles. Antibacterial activity of biosynthesized palladium nanoparticles was found to be efficient and rapid against both bacterial strains (gram+ve and gram-ve). Palladium Nanoparticles were found to be highly toxic to Bacillus subtilis and Escherichia coli pathogenic bacterial strains, indicating that they could be used in biomedical research.

Plant extracts have been found to be more reliable compared to microbes due to their easy scaling up procedures. Plant extracts exhibit reducing and stabilizing properties as they accumulate and deposit (capping) on the metal ion surface to form nanoparticles. There are so many natural, medicinal plant extracts containing primary and secondary metabolites, enzymes, proteins etc. biomolecules which are responsible for the reduction of metal ions to metal Nanoparticles (Mittal et al. 2013). The antimicrobial effect of PdNPs strongly is dependent on their size and shape. The ultra-small PdNPs with a difference of 1 nm in size showed that the smaller PdNPs were more toxic to E. coli than the large ones, and the ultra-small PdNPs showed a very high antimicrobial effect at even very low concentrations (10−9 M) (Adams et al. 2014). The Pd nanocrystals with two different shapes (i.e., Pd cubes and Pd octahedron) showed distinct antibacterial activity on Gram-positive and Gram-negative bacteria. The facet-dependent oxidase and peroxidase-like activities of Pd nanocrystal help them have excellent antibacterial properties by the generation of reactive oxygen species (ROS) (Fang et al. 2018).

Plant material (Cocculus Hirsutus) was obtained the Department of Botany from botanical garden at Hemchandracharya North Gujarat University, Patan (Gujarat). Analytical-grade Palladium Chloride (PdCl2) reagent was used as received from the S.d. fine chemicals (India).  As a solvent, double distilled water was used in the experiment. For the Cocculus Hirsutus Leaf Extract Preparation, the newly harvested Cocculus Hirsutus plant material was carefully washed with tape water, supplemented by D.D. water, and dried for one month at room temperature in the shade. A grinder was used to process dried plant material. 10 gm dried plant powder was boiled at 500C for 30 minutes in 100 ml double distilled water. After cooling, the mixture was filtered into Whatman filter paper no.1 and the resulting aqueous filtrate was deposited at 4°C for possible PdNPs synthesis.

For the synthesis of PdNPs, in a conical flask, 30 ml of 1 mM PdCl2 solution was slowly applied to 20 ml of prepared plant extract for biogenic synthesis of PdNPs. After applying the salt solution, the reaction mixture was placed on a magnetic stirrer with a hot plate set to 50°C for 60 minutes, and the colour of the reaction mixture changed from light orange to dark brown (Fig.1), confirming the tentative proof of PdNPs formation by reducing the ions Pd+2 to Pd+1 condition. UV-visible spectroscopy with an SPR peak at 422 nm was used to validate the results. The reaction mixture was reduced in less than eight hours. After centrifuging the final reaction mixture for 15 minutes at 6,000 rpm at 4°C, the bottom deposited nanoparticles were extracted and dried in an oven for 1-2 hours. For further characterization and biological screening, the obtained crystalline powdered PdNPs is placed in an airtight bottle. 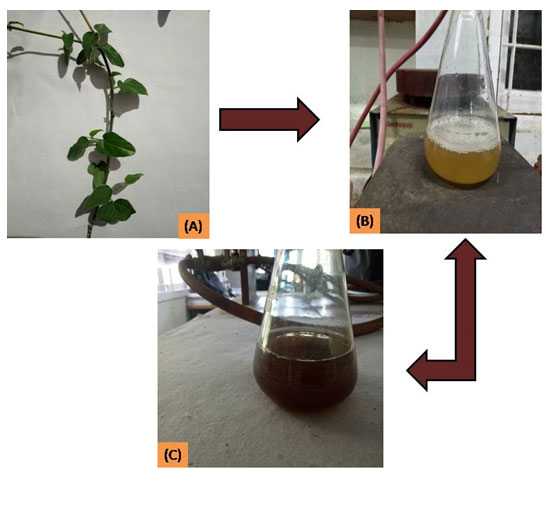 To analyse the characteristics of PdNPs, the UV-vis spectrometer (UV-1800, Shimadzu, Japan) was used to classify biosynthesized Palladium nanoparticles in the range of 200-800 nm. A Rigaku D/MAX 40 kV diffractometer with graphite chromatography was used for the X-ray diffraction analysis. Debye Scherer’s formula was used to calculate the average particle size.

UV-Vis Spectra Analysis: UV-vis spectroscopy measurements (Shimadzu UV 1800) were carried out at room temperature in the region 800–200 nm as a function of time of the reaction. The UV–Visible absorption spectrum was used for the analysis of optical properties of biogenic synthesized Palladium nanoparticles. The mono dispersed Palladium nanoparticles are shown in synthesis figure-3. The room temperature spectra exhibited strong absorption peaks at 422 nm for samples respectively, which is in good agreement with previous work (Osonga et al. 2020). 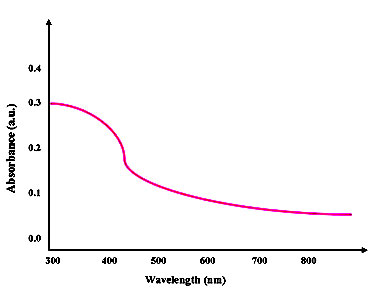 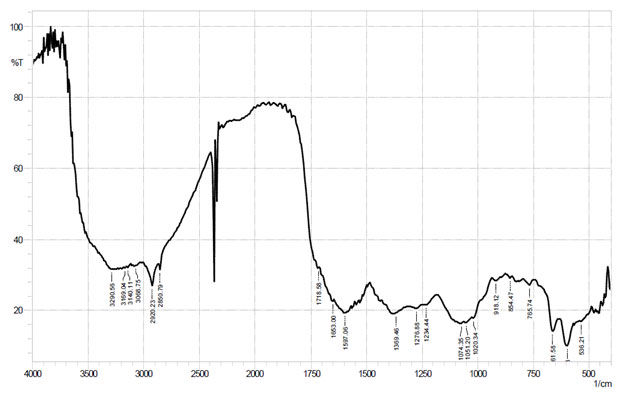 Where, D is average Particles size, λ is wavelength (1.5418 Å), θ is the Bragg’s angle and β is full width half maximum (FWHM) of corresponding peek. The Scherer’s formula was used to estimate the particles sizes and was found to around 12 nm. 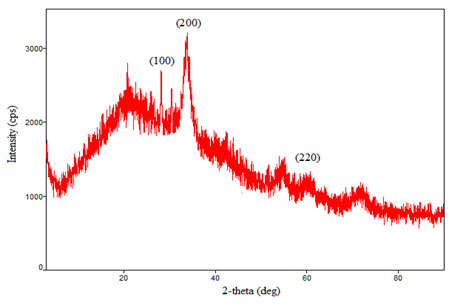 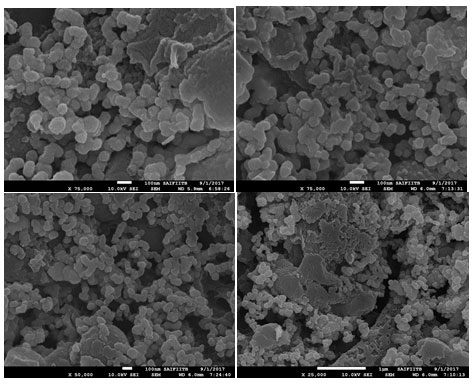 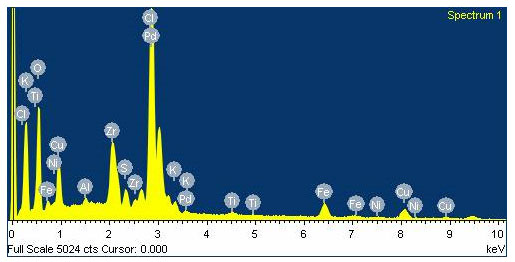 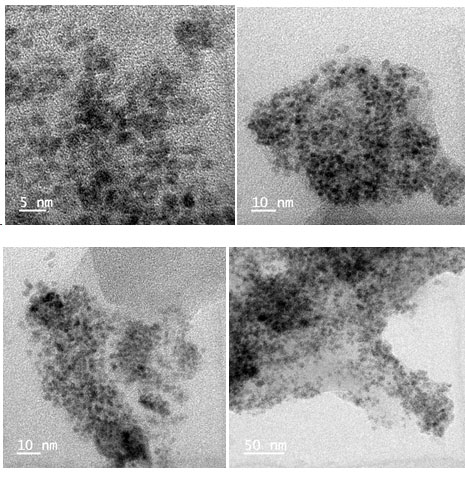 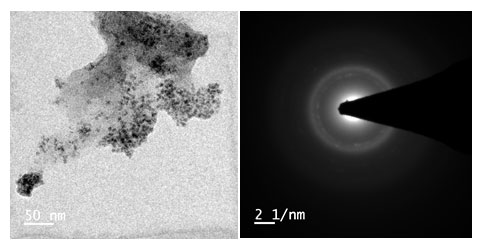 Fresh overnight cultures of each strain were swabbed uniformly by cotton on plates containing sterile Luria Bertani agar, and 4 cup borer wells (diameter size – 6 mm) were prepared. Each well was filled with 50 microlitres of sample nanoparticles, with a commercial gentamicin disc serving as a positive monitor. It was incubated for 24 hours at 37°C, during which the diameter of the inhibition region was measured in millimetres across the well (Fig. 9). (Table 3).The inhibitory compounds in the tested sample trigger the bacterial growth inhibition region. The antibacterial efficacy of the agar well diffusion process was found to be satisfactory. In comparison to Escherichia coli, Bacillus subtilis showed poor results in terms of zone of inhibition. Plant extract, on the other hand, yielded no results. The experiment was repeated three times in order to produce improved data Rahul et al. 2019; Rahul et al. 2020; Hiral et al. 2020). 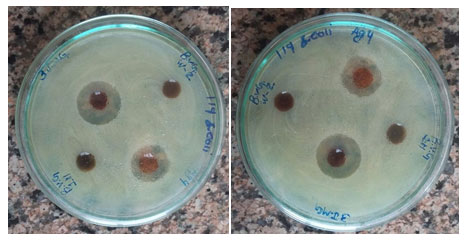 Conflict of Interests: The participating authors had no conflicts in their interests while preparing for this research.

Anand, K., Tiloke, C., Phulukdaree, A., Ranjan, B., Chuturgoon, A., Singh, S. and Gengan, R.M., (2016). Biosynthesis of palladium nanoparticles by using Moringa oleifera flower extract and their catalytic and biological properties. Journal of Photochemistry and Photobiology B: Biology, 165:87-95.

Khazaei, A., Rahmati, S., Hekmatian, Z. and Saeednia, S., (2013). A green approach for the synthesis of palladium nanoparticles supported on pectin: Application as a catalyst for solvent-free Mizoroki–Heck reaction. Journal of Molecular Catalysis A: Chemical, 372:160-166.

Veisi, H., Rashtiani, A. and Barjasteh, V., (2016). Biosynthesis of palladium nanoparticles using Rosa canina fruit extract and their use as a heterogeneous and recyclable catalyst for Suzuki–Miyaura coupling reactions in water. Applied Organometallic Chemistry, 30(4):231-235.

Viswadevarayalu, A., Ramana, V., Sumalatha, J. and Reddy, S.A., (2016). Biocompatible synthesis of palladium nanoparticles and their impact on fungal species. Journal of Nanoscience and Technology:169-172.