Wild edible plants (WEPs) especially bearing edible fruits are considered as a rich source of nutrition for the aboriginal tribal and local communities residing in the forest catchment area since ancient time. The wild fruits are refreshing, delicious and cheap supplements of vitamins, minerals and proteins for the users. However, current scenario indicates that their use and knowledge is declining day by day. In this study, we reported wild edible fruits belonging to 26 angiospermic plants from 23 genera and 23 families from protected area of Katepurna wildlife sanctuary (MS) India. Of these identified wild edible fruit plants, 69% were trees, 23% were shrubs and 8% were climbers. Most of the fruits were eaten raw, some cooked and few were used to make pickles or chutney. Further, it was noted that most of these fruits were used by the tribals of this area for their ethnomedicinal potential. This knowledge about duel application of wild edible fruits should be preserve and utilize for the benefit of mankind.

Wild edible plants (WEPs) are those plant species which are not cultivated or domesticated but could be accessible from various natural habitats and used as food (Beluhan and Ranogajec, 2010). It was estimated that, humans might have utilized more than 7000 WEPs globally (Grivetti and Ogle, 2002) but most of these remain under-utilized (Mohan Ram, 2000).In many developing countries, WEPs produce specially fruits play a vital role in the livelihoods of Tribal and rural communities residing in forest catchments (Patole and Jain, 2002; Pundir and Singh, 2002). These plants serve as an alternative to staple foods during times of seasonal food scarcity and also could be used as valuable supplement for a nutritionally balanced diet. Currently, some Tribal and rural peoples use to sell these fruits in local market, providing a source of income for poor communities. Further, these species could be used as new potential sources for domestication (Prasad et al., 2003; Shrestha and Dhillon, 2006). Currently there is decline in the use of wild edible fruits by the native community people, (Mallick et al., 2017, Sardespande and Shalckleton,  2019).

This might erode the traditional knowledge about using these fruits as healthcare supplements. Therefore, present study was planned to focus on documentation of wild edible fruits/ fruit plants from Katepurna wild life sanctuary (KWS), Maharashtra, India. The most tribal populated villages near KWS are Kurankhed Dhotarkhed, Fetra, Kasmar, Vastapur, Deodari, Yedsi, Khopdi , Wai and Wagha. The total population of tribals in this area is about 12,000 (as per 2011 census) which is mostly depends on forest products for their livelihood.

The notified spread area of KWS is 73.69 Sq. km. which lies between the meridians of longitudes 77°7’41” and 77°12’36” East and between the parallels of latitude 19°22’14” and 19°29’77” North. It is situated in Akola District, West Vidarbha region of Maharashtra State, India (fig. 1). The climate is dry deciduous with an average maximum temperature of 45°C and minimum of 21°C. The vegetation of the sanctuary is dry deciduous type, while the slopes have thickly forested dense vegetation patches harboring rich fauna. The Andh, Bhill, Pawra and Halba are the prominent Tribal communities inhabiting this forest catchment area.

The study area was divided into five sub-centers and these sub-centers were visited twice a month post-monsoon to mid- summer during 2015 to 2018. To assess the traditional knowledge about WEPs, especially edible fruits, frequent interactions were made with the local Tribal experts and villagers, including farmers, shepherds, housewives and village heads. In total 18 informants were interviewed regarding their knowledge about use of wild fruits available in the sanctuary area. Of these informants, 4 were housewives, 3 were Tribal healers (Vaidoo’s from Andh, Pawra and Bhill communities), 4 were village heads who were practicing herbal medicine, 3 were old age formers and 4 were shepherds. All the informants were aging more than 60 years except the shepherds with age ranging from 30 to 40 years. Live specimens and available photographs were shown to them for local identification. The fruits were preserved and identified with the help of available literature and floras (Naik, 1998; Singh and Karthikeyan, 2000; Singh et al., 2001; Yadav and Sardesai, 2002) and specimens were deposited in Department of Botany, Shri Shivaji College of Arts, Commerce and Science, Akola (MS) India.

The fruits WEPs used by the Tribal communities  and local villagers residing in the vicinity of Katepurna wild life sanctuary were collected, identified and documented (table-1). In total 26 WEPs whose fruits were edible, were collected and identified during the study. They are presented here with their local name, botanical name along with family to which they belongs. The collected material belongs to 23 genera and 23 angiospermic families with 69% trees, 23% shrubs and 8% climbers (Fig. 2). In the modern era of urbanization and industrialization, only few peoples from different Tribal communities in the area, along with mostly elderly villagers were only noted to use these fruits seasonally in their diet indicating their declining use. Apart from the edible use, the collected plant fruits also have some medicinal properties. Most of the fruits reported here in this paper are eaten raw or cooked. Some of them use to make pickles. During the survey, it was also noted that, these fruits were also used for their medicinal potential (table- 2). Of the collected fruits,  4 were used to improve digestion, 4 were as anti-diabetic agents, 3 as anticancer agents, 3 as anti-inflammatory, 3 as antioxidants, 3 as antimicrobial agents; 2 for ulcer healing properties and rheumatism curing agents. The details are presented in table 2.

Earlier, Barua et al., (2000) investigated wild edible plants from Majuli Island and Darang District of Assam. A similar report was made by Rajasab and Isaq (2004) from north Karnataka. Aberoumand and Deokule (2008) had reported edible fruits from Iran and India. Bhogaonkar and Marathe (2010) studied the wild edible plants from Melgahat forest, Amravati District (MS). Reddy (2011) made similar report from Chandrapur District, Setiya et al., (2016) from the Gadchiroli District (MS) and Mondaragi et al., (2017) from the Southern Western Ghat of India. All these reports indicate that Tribal communities and local people use the WEPs or plant parts including fruits as nutritional supplements.

We argue that this is probably a nutraceutical approach of different tribal communities to maintain good health (Pushphagadan, 2000; Sardespande and Shalckleton,  2019), which is now a days observed to be declining alongside new assess to foods, markets and urbanization. Most of these wild edible fruits are rich in nutrients and minerals promoting their use in traditional medicine (Rothe, 2003; Kamble et al., 2010; Bhatia et al., 2018). Further, these plants could play vital role in eradication of poverty by generation of income resources, availability of food and diversification of agriculture (Thakur et al. 2017 and Bhatia et al. 2018).

Our report is in analogy with earlier reports indicating that the Tribal communities in the vicinity of Katepurna wildlife sanctuary frequently use the fruits of WEPs as supplementary nutrition rich food or medicinal component. However, further study can validate each wild fruit for essential nutrients and minerals. These under explored wild fruits have to be researched and conserved in natural habitats and if it will be possible, cultivate some of them for food security in future. 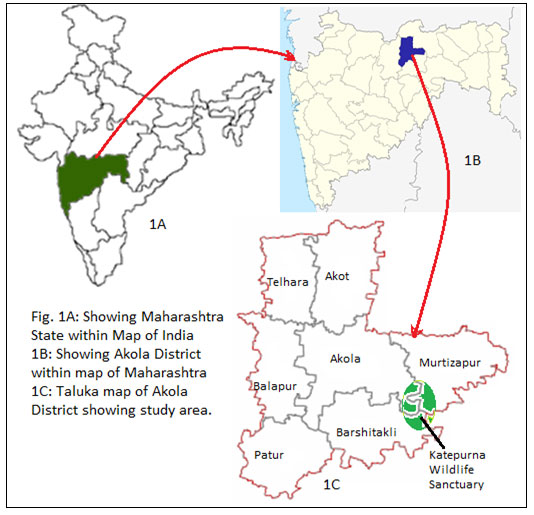 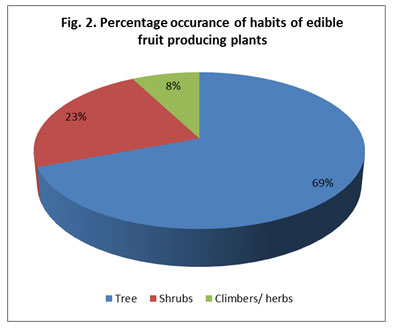 Author Contributions:RPS has surveyed the study area seasonally during 2015 to 2018 and also done the interview with local herbal healers. She has prepared initial draft of the manuscript. Later along with DKK she has finalize manuscript, interpreted and presented data after analysis to present form.

Conflict of Interest: Authors declared that there is no conflict of interest.

Thakur D, Sharma A. and Uniyal SK. (2017): Why they eat, what they eat: patterns of wild edible plants consumption in a tribal area of Western Himalaya. J. Ethnobiol. Ethnomed.13: 70.